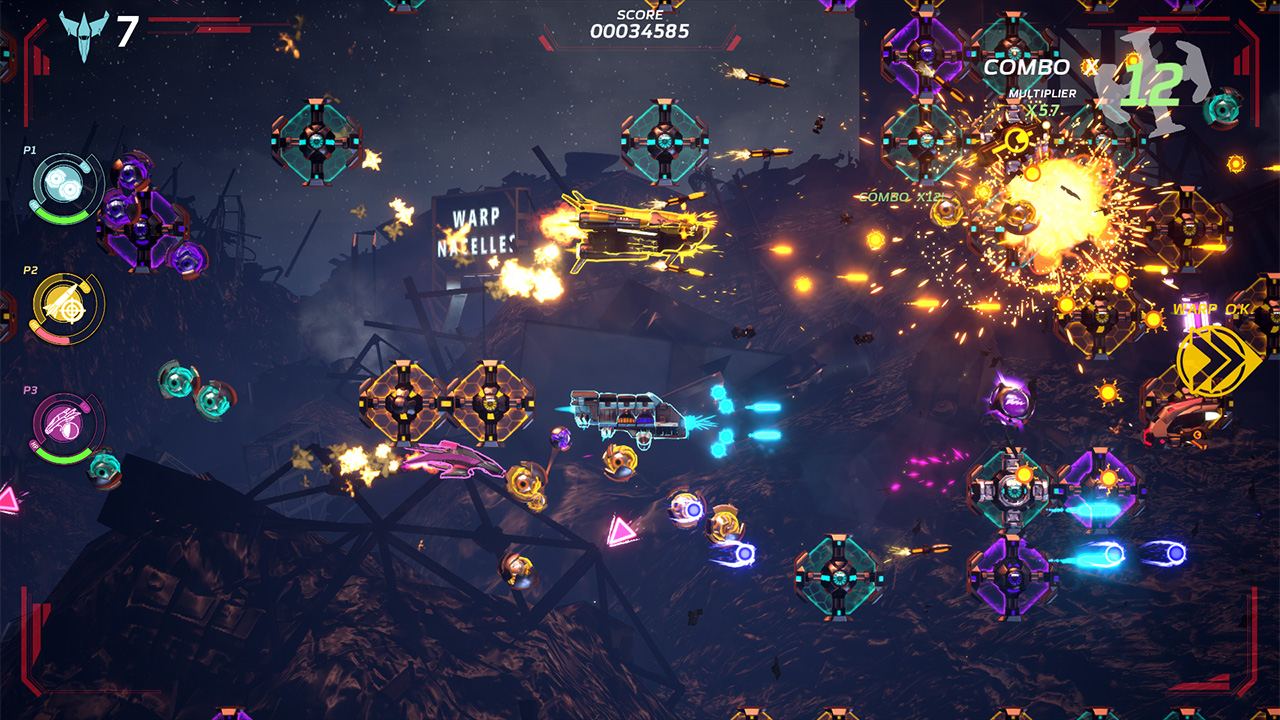 Which cide are you on?

There are shmups, and there are bubble poppers, and ne’er the twain shall meet, right? Well, they have, thanks to Puny Human’s Galacide. Whether this mash-up works for you will depend largely upon what you love and hate about shoot ’em ups.

As with many modern takes on the genre, the action flows from left to right. Alone or with up to three friends in local co-op, you’re tasked with meeting various objects as you progress through the levels. Of course, most of these involve clearing out a whole mess of enemies. That much is pretty standard fare, including the ability to upgrade your ships and weapons, and to select different ships optimized for the tasks at hand (mining ship, freighter, phase ship and battleship). 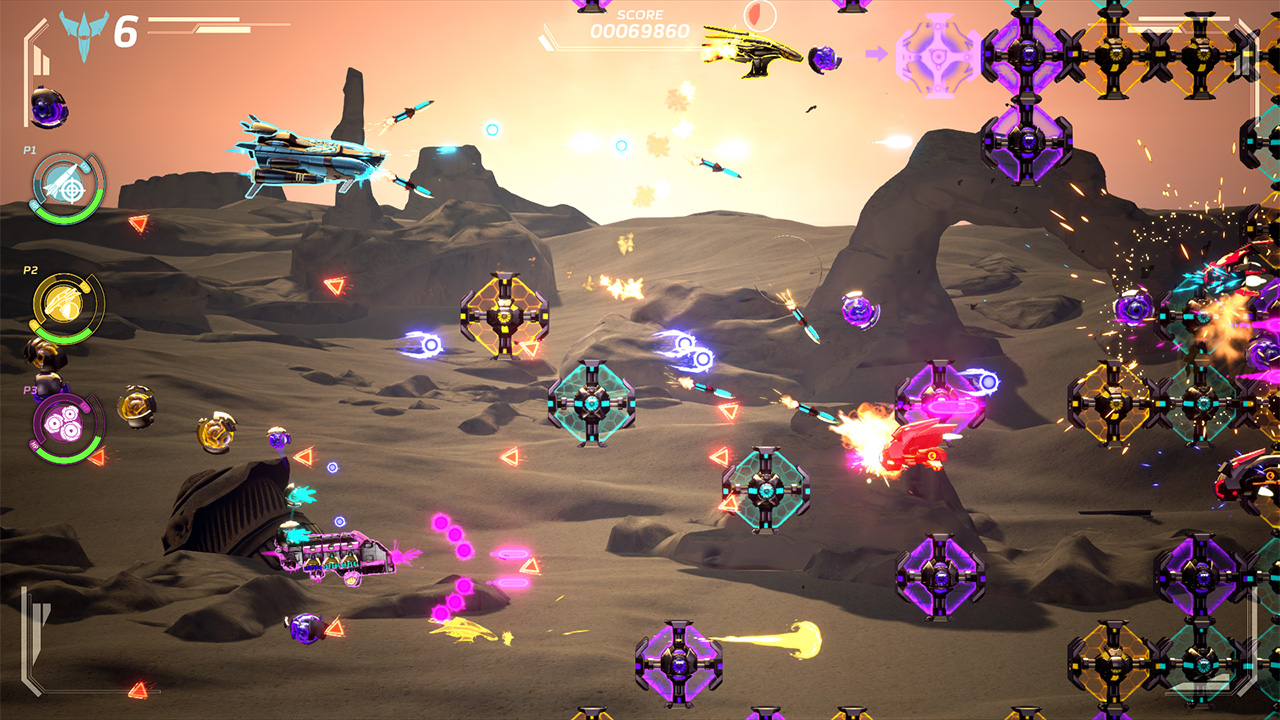 It’s all pretty familiar, but Galacide provides plenty more to do than just avoid enemy fire while using various attacks to take out opposing ships. Unfortunately, those aren’t the only objects in your way. The levels quickly fill up with colorful barriers that must be cleared out in order to advance. And although your weapons are more than enough for the attacking ships, they’re useless against these obstacles. Instead, you need to grab floating objects that can be fired into the barriers, creating another. The new one will match the color of the object you pick up, and connecting four or more of the same color will clear them out.

So, you’re basically bubble-popping your way through the universe while under attack from an unidentified menace. It’s all kind of messy and a bit claustrophobic, but that’s the point. You’re not just speeding your way through hordes of enemies; you’re carefully clearing a path. Galacide is as much a puzzle game as it is an arcade action title. 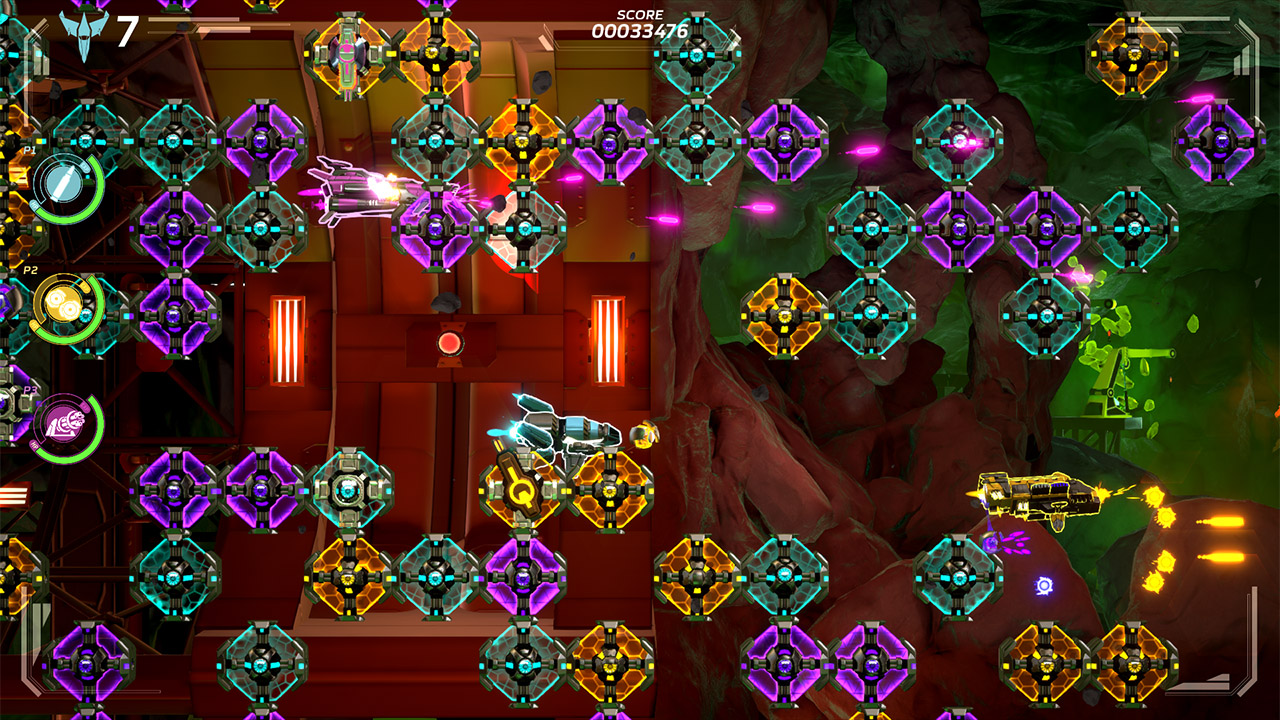 There are positives and negatives to this, and they’ll swap depending upon whether you prefer shoot ’em ups or matching games. Galacide gives you the time you need to navigate the mazes and clear your way, but that means the gameplay is slower than normal. There are also fewer bullets and fewer enemies, so the action isn’t nearly as intense.

That doesn’t mean it’s not stressful, however. Any match-four player will tell that things can get quite frantic when the screens are filling up, and that’s certainly the case here. The problem is exacerbated by the amount of items you need to keep organized. Which color object do you need to pick up? If you jettison one to clear another, will it block your path? Will you trap yourself in enemy fire trying to get the color you need? And why is it so hard to remember which button attacks enemies and which one releases the “bubble popper?”

Galacide makes striking use of visuals and color, but it’s a lot to process, especially when you’re in local co-op. So much is happening on the screen that it’s almost impossible to keep track of where you are and what you’re doing. That’s part of the fun with shoot ’em ups, but it may put off the more casual match-four crowd. 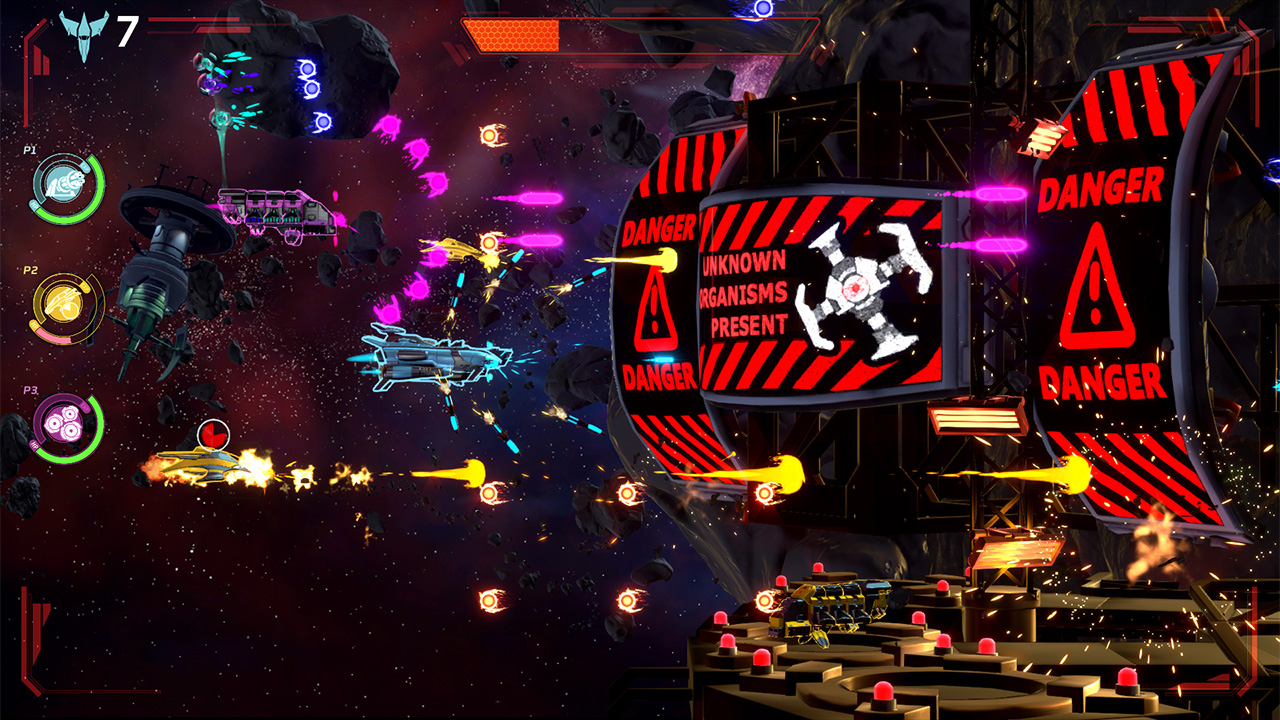 Thankfully, there are different modes that skew toward each crowd. Campaign tells a story through progressively more challenging levels. Once that’s done (or if you just prefer a more arcade-like challenge), Endless Play allows you to take on wave after wave of enemies attacking you through the puzzle wall. Finally, there’s a Puzzle Play more that’s more about matching colors to clear your path than it is about defending your ship from enemy attacks. Which of these you prefer will depend upon your taste in games, or maybe just your mood at the time.

No matter which route you go, Galacide is only mildly successful. It’s a bit too slow to be fully entertaining, and a bit too cramped. I think I would’ve enjoyed the gameplay more if the developers had pulled the camera back a bit to shrink down the ships and objects, giving the player more room to move around. In fact, I greatly preferred the boss battles as they cleared most of the screen and allowed me to mostly focus on a single objective. 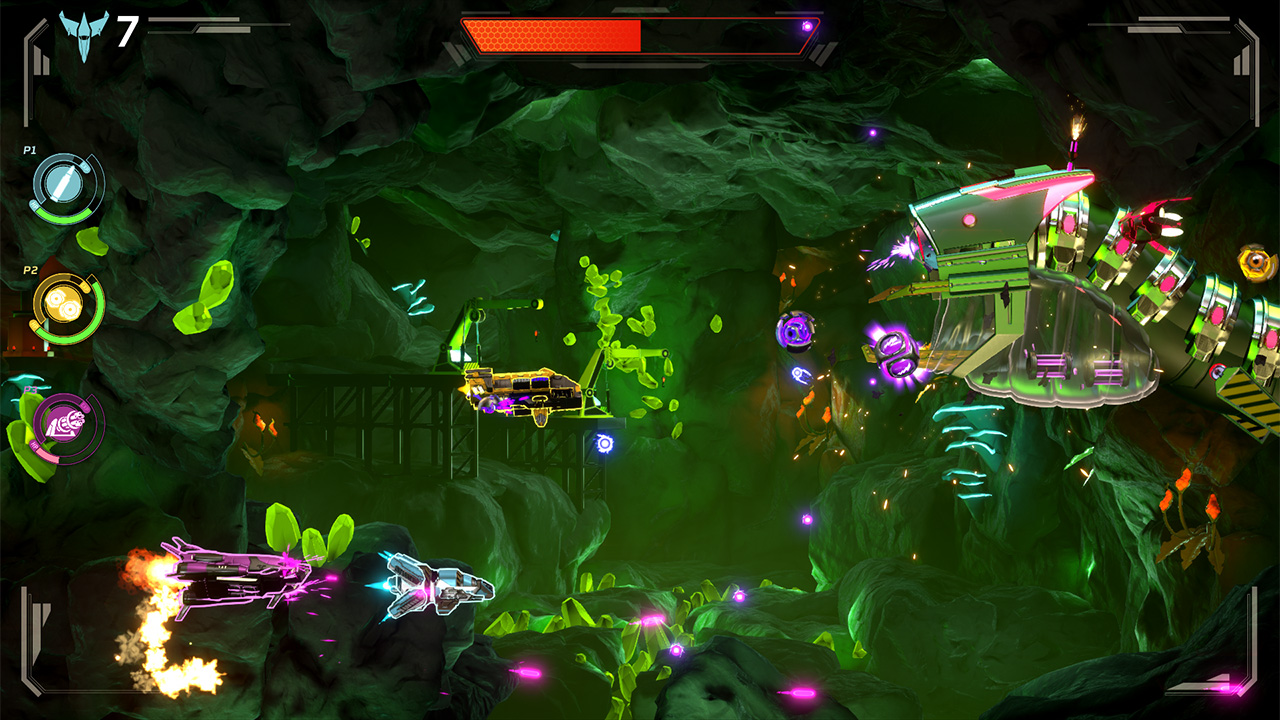 As such, I’m slightly hesitant to recommend Galacide to either hard-core shmup fans or casual match-four players. The game falls too close to the middle to appeal to either side fully. If, however, your preferences fall somewhere between the two, Galacide will manage to scratch both itches in equal measure.

Either a shoot ’em up with bubble popper elements or a match-four game with shmup tendences, Galacide is an interesting, visually appealing mash-up. It’s something you’re likely not used to seeing, but whether you find it successful will depend mostly upon what you like and dislike about each genre.