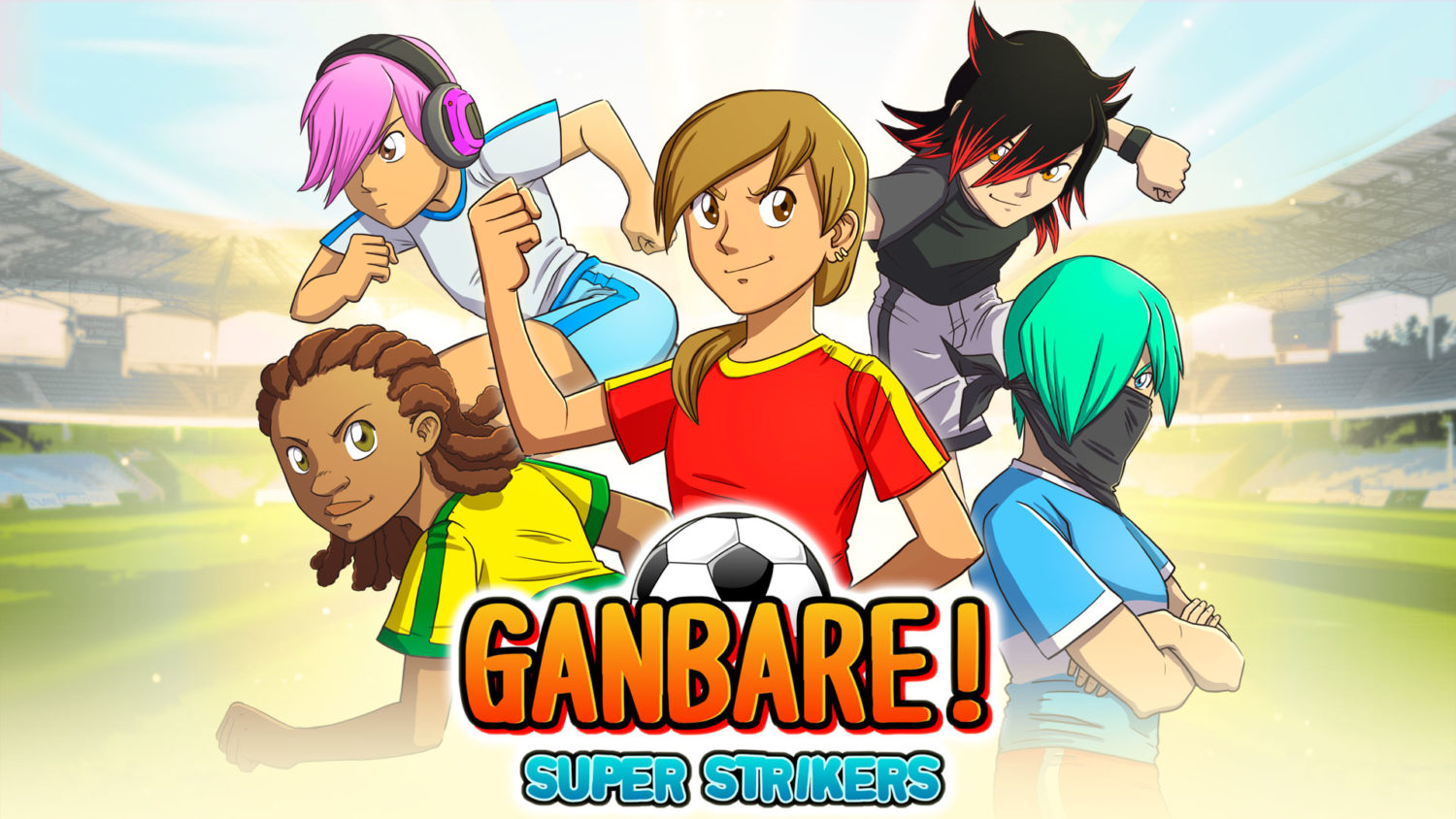 Ganbare! Super Strikers is a sports game and tactical RPG rolled into one. It combines grid-based tactical elements with the strategic gameplay of football—aka soccer—into a mashup that generally works well, despite a few drawbacks.

There are two modes to get you started: Story mode and Arcade mode. Arcade mode comes with various sub-categories, namely Quick match, Tournament and League. 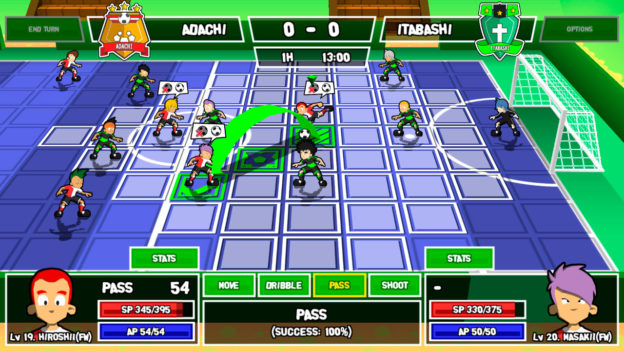 Quick match, as the name implies, lets you jump straight into a match, with a few options to customize the experience. You can change the duration, number of players, and weather, and even turn penalties off. It’s a fun way to get competitive with a buddy. It’s also the only two-player outing in Ganbare!

The tournament and League modes are less enticing, since they differ little to the main Story mode. I’m not even sure what the difference is between Tournament and League except the way upcoming games are displayed. I’m sure sports fans will know the difference in terminology. In Ganbare!, the options and gameplay are the same in these two modes, making it more of a preference as to how you play through your series of games. Ultimately, you’re going to select a team, customize your game, and play a bunch of matches in the hope of being crowned the champion. 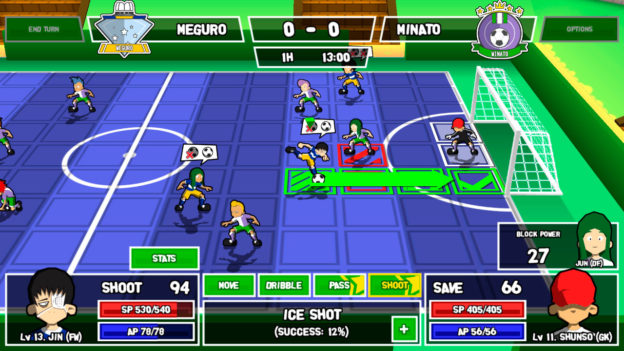 Story mode is where most players will head. There are 14 matches to play as you make your way to the grand final. You’ll need to win each match in order to unlock the next. There are also optional challenges that earn you a star rating for each game. These range from scoring a set number of goals to ensuring your opponent doesn’t score at all. Completing tasks like these earns you stars, up to three per match, which provides some replay value if you feel like going back to get all 42 of them.

Like any good tactical game, you can select from a series of moves during your turn. When your team has the ball, you can move, pass, or strike. When an opponent is nearby, a handy indicator shows your chance of success against him. It’s well done; I imagine this is how the characters of Fire Emblem would play soccer on their day off. You can even unlock special abilities, like freezing opponents during a pass. This adds a magical element that ramps up the challenge; it’s difficult to tackle or score when your player is frozen to the spot for a couple of rounds. 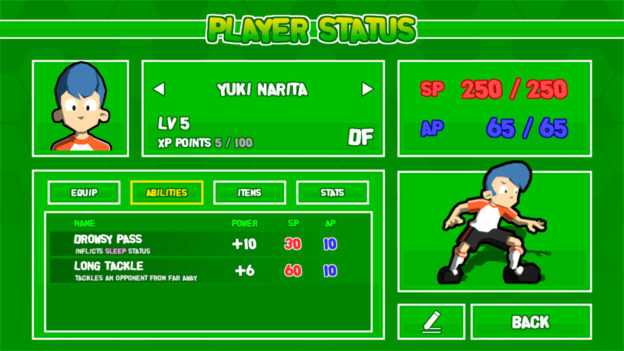 I love that you can customize your player, including skin color, hair color, and facial expression. It helps make the character your own, although I would like to have seen an option for female players. You can also create your own team name, logo and colors. This gives you ownership of your team and a stronger motivation to be victorious.

Each team you meet will taunt you through some brief dialogue, but it’s all friendly banter. This is the nature of Ganbare!, a light-hearted approach to football. The simple graphics suit this tone, sporting a colorful 16-bit style with cartoon-y characters. The downside is that it’s a little too simplistic. You can level up players and gain new equipment, but every match is the same, and this becomes repetitive, especially if you’re not super into soccer. 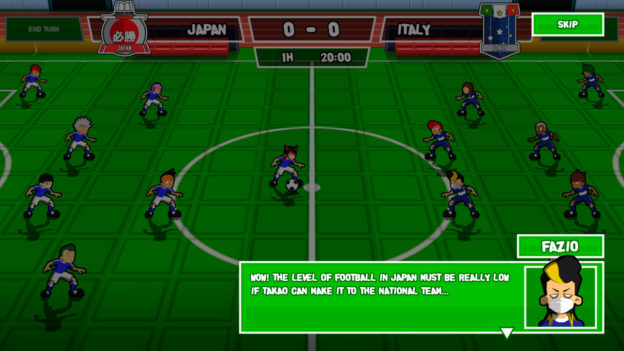 For some reason, there are only two difficulty settings: Easy and Normal. Perhaps a Hard mode could provide a greater challenge to satisfy more adept players. That said, it’s quite satisfying to score a goal, mainly because it takes a lot of patience and planning to pull one off.

The field is easy to navigate, as are the controls. These are well designed, making for an intuitive experience. Sometimes, the score and timer at the top of the screen can block your players on the far side of the field. This is rectified by zooming out or rotating the field left or right. Unfortunately, the rotated isometric view doesn’t display well; it looks as though the perspective is off. A little more care could have gone into this feature.

Overall, I had fun with Ganbare! Super Strikers. As a fan of tactical RPG games, it was easy to pick up and play. It presents an intuitive interface with cutesy graphics all layered over an engaging sport. There are likely to be three combinations of players reading this review: if you like tactical RPGs and aren’t fussed about football (like me) you could find some enjoyment here. If you’re into soccer AND tactical RPGs, you should consider checking this one out, understanding that it’s a slow, turn-based version of the game. If tactical RPGs aren’t your thing—even if you’re a football fanatic—I’d give this one a miss.

Ganbare! Super Strikers is a fun tactical RPG that happens to feature soccer players. The turn-based approach works well overall, though the formula can wear a little thin after playing several matches in a row.