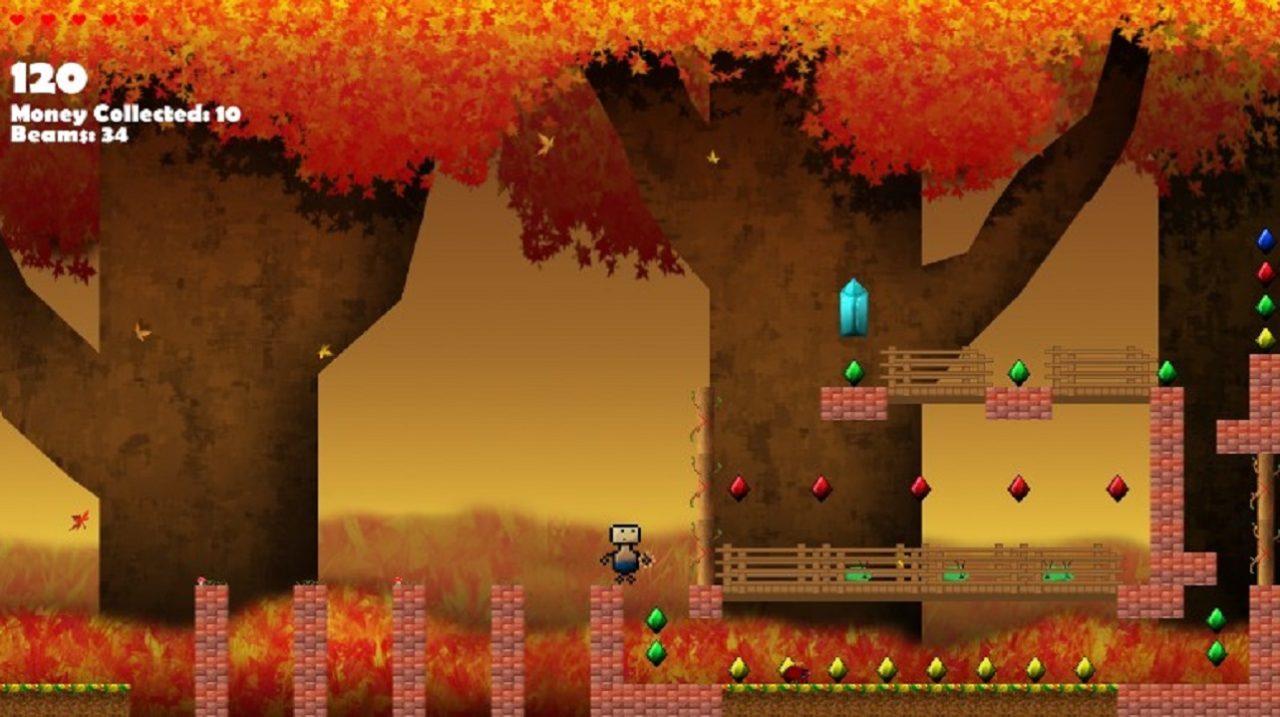 The classic platformer is the latest style of game to be worked on by the small indie team at TreeFall Studios. If you’re a fan of the genre, how does The Gem Collector shape up? Let’s find out, as we join Nomi in his collectible quest.

PNM readers have been learning about this game (among other upcoming titles) via TreeFall’s dev diaries. What they may not know is that I first played it on the now defunct Desura a few years ago. I enjoyed it at that time, but naturally my expectations for a Wii U release are much higher.  What has The Gem Collector brought with its move to the eShop?

There are many positives, but let me first start  by getting a few of my issues out of the way. The story, though of minor consequence, is very easy to miss. There is no way to adjust the controls and map them to your preference. The world art for the loading screens is gone. Speed running (alluded to in the dev diaries) is of limited appeal with no in-game timer or leaderboards. And the co-op gameplay, while greatly appreciated, does not support the Classic Controller Pro, or  the Wiimote and Nunchuck combo.

Turning attention to more positive aspects though, Gem Collector’s gameplay is rather good. The mix of platforming, enemy encounters, mild puzzles, and collecting, blend together in a satisfying way. Some levels introduce a second playable character (Jasper the parrot) which leads to further puzzles and additional collectables. Varied beam projectiles add their own puzzle twist, and prove to be needed for completionists like myself.

One of the visual highlights of The Gem Collector is its bonus worlds. The fun backgrounds are nice, and you’ll definitely want to try and unlock them all. A zoom feature lets you appreciate several small graphical details you might otherwise miss. The colorful presentation is an interesting combination of retro and more modern, but it’s a sizable improvement over the original game, and the end results are quite solid. The visuals are supported with a number of musical tracks. They are on the shorter side (and I like some more than others) but several are quite good.

The Gem Collector has a refreshing challenge if your aiming for 100%. Just running from start to finish might not prove overly tough, due to the abundance of hearts and ammo. But trying to get every collectable, especially on the vertically scrolling levels, will test your platforming skills. It’s worth it though, with the unlockable bonus worlds. There’s a couple other cool surprises as well, but I don’t wish to spoil them.

All of TreeFall’s releases are budget priced, and therefore smaller experiences. That said, it took me just shy of 3 hours to 100% the game. For only $2.99, I feel platforming fans will definitely get their money’s worth. The Gem Collector is a fun platformer at a good price, and a game worth adding to your Wii U’s digital library.

The mix of platforming, enemy encounters, mild puzzles, and collecting, blend together in a satisfying way.