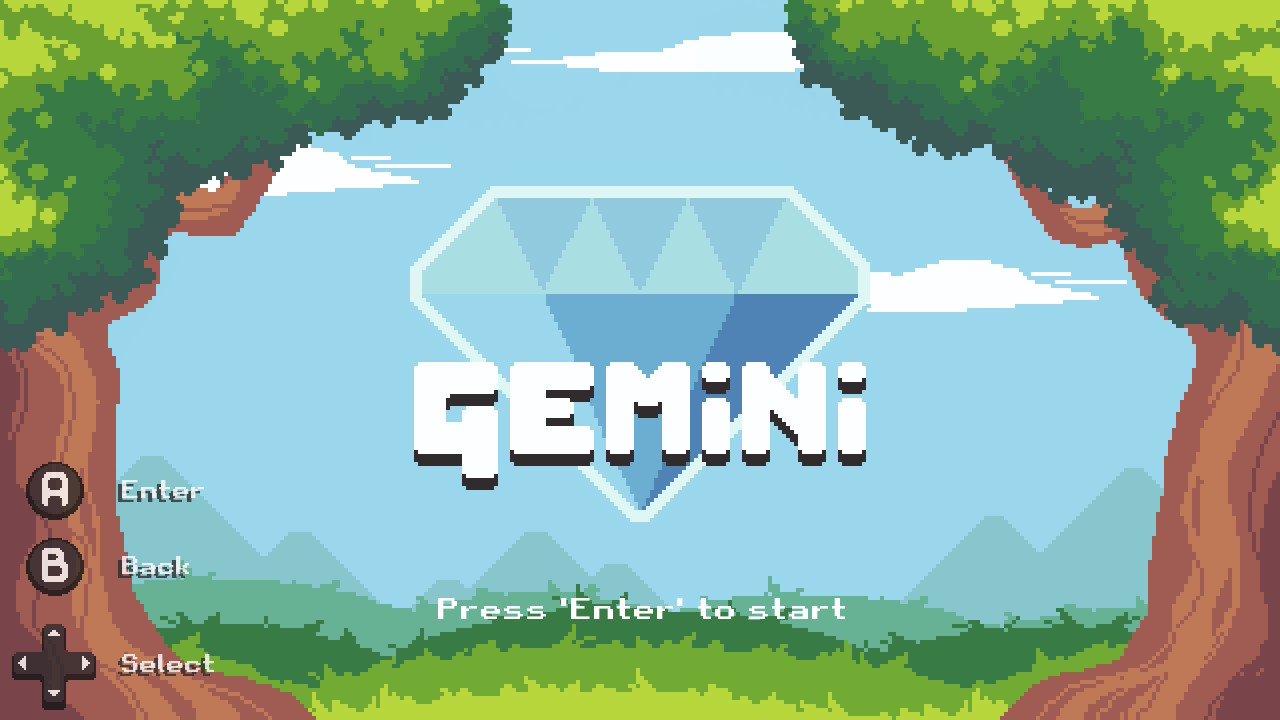 Gemini is an action, tower defense-like game. You play as a hero protecting a jewel, the Gemini, from waves of enemies. For a game that’s action-packed with hordes of enemies, let’s see how challenging and engaging it is. 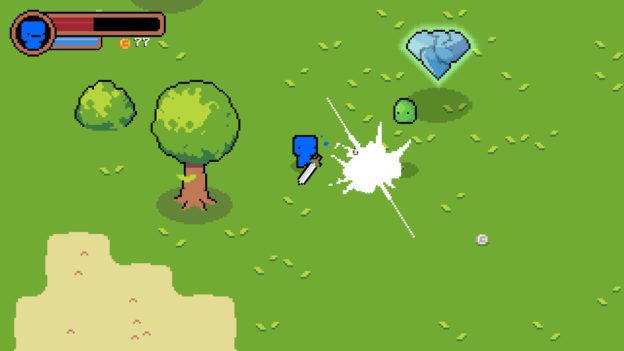 First, there’s little to no story in this game. The “story” is told in passing, which explains why you need to protect the Gemini. It’s powerful, it’s magic, and enemies want to destroy it. That’s all.

The game is short with five worlds, each being five levels long. Each level consists of the gem being placed in the middle of the area while five waves of enemies are coming toward you. At the beginning of the game, the waves are super easy. The bad guys come few and far between, and the number of enemies per wave isn’t that much. Each wave gradually gets a tad more difficult, but it’s typically manageable. 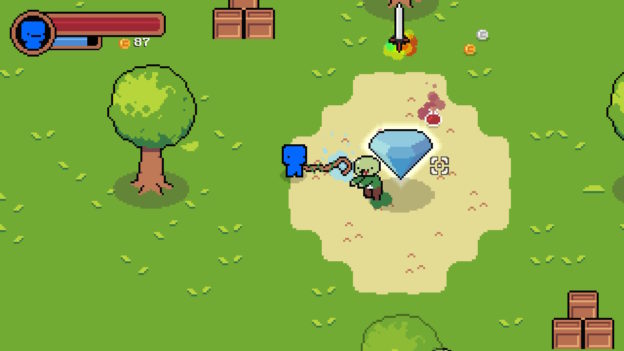 The enemies are less than intelligent. They have tunnel vision and will head straight toward the gem unless you attack it first. Then they’ll go after you. If too many enemies were on screen at once, I focused on attacking each of them once just to steer them away from the gem. Then I focused on killing them all.

There are breakable boxes scattered around each area. They may contain health potions, mana potions, or coins. Occasionally, a chest appears that has some sort of upgrade for you to use during that level. For example, a party hat to wear that increases your health. 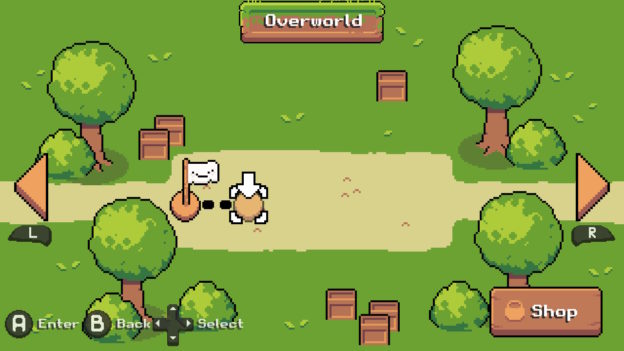 Once the five waves are completed, a white flag will appear, and you’ll be teleported to the shop. Here, four items will be randomly generated for you to choose from. These items are upgraded weapons (various swords, boomerangs, wands, etc.) or potions to boost your health, mana, speed, and more. You can also buy a potion for the Gemini to increase its integrity, making it harder for enemies to break. However, because these items are randomly generated between each level, if you don’t have enough money to buy something, you might not see it again for a while. This can get frustrating if you need a new weapon or are aching for increased health.

All in all, Gemini is a solid game. The gameplay is fun, the pixel graphics are charming, and the music is upbeat. Despite the short length, it sounds like a great game to sink a couple of hours into. However, that wasn’t the case for me. 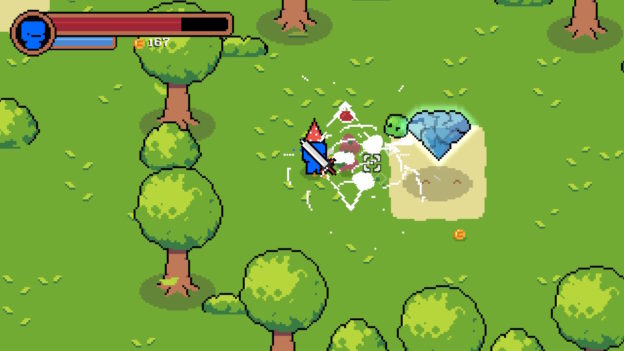 As a tower defense game with waves of enemies constantly heading toward you, I need good controls. The controls in Gemini, unfortunately, did not deliver. They’re simple enough—using the left analog stick to move and the ZR shoulder button to attack. It’s not a matter of spamming the ZR button to hit the enemies, though. Once you attack, the next time you press the ZR button to attack again, it doesn’t always respond. You can’t spam attack, which was annoying for me because I prefer to spam my enemies when they’re constantly attacking me or whatever I need to protect. Even though it’s just for a moment, that vulnerability was what killed me (or destroyed the gem) most of the time.

Plus, if you get hit, your character bounces backward. I’d attack right away out of reflex and waste my shot because I was too far away from the enemy. Thus, I’d get hit again.

Here’s the real kicker, though; there’s a small cursor-like target to the right of your character. If you have a sword, there’s no getting up close and personal with the enemies. No, you need to line that cursor up with the bad guys to hit them. This was annoying when slimes bounce and just happen to jump right as you attack. Or the enemies had range attacks that could hit you a mile away, but you couldn’t hit them. You, too, can have range weapons such as a wand that spews out magic or a boomerang. But with that cursor, it’s so hard to aim and hit your target. 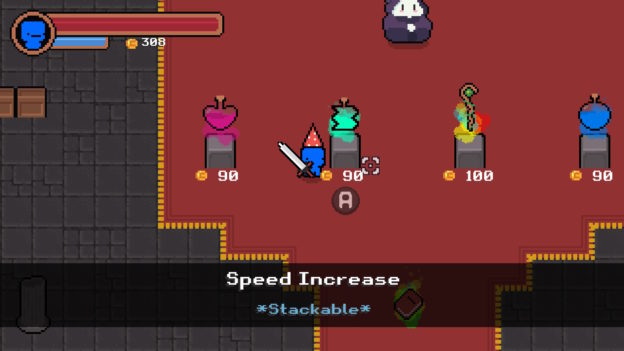 At the final level in each world, after the fifth wave, a boss appears. Depending on what weapons you’re able to buy and have equipped, they will do little to no damage to the boss. Not to mention, the bosses have huge hit-boxes, making it hard for you to attack them. For a short game, it can take up quite a bit of time to get through.

Overall, Gemini isn’t a bad game. Fending off waves of enemies is always a good time, in my opinion. Everything about the game was pretty solid, but I had a hard time enjoying it with the clunky controls.

Gemini is a challenging action game with many weapons to choose from and unique enemies and bosses. However, the clunky controls may make you want to rage quit.