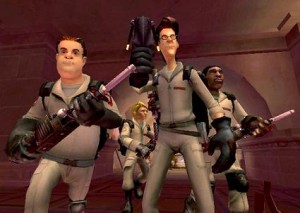 Who ya gonna call? Na-na-na-na-na-nananana, nana-na-na-na, nananana! That’s right, Ghostbusters The Video Game is out and so begins the rebirth of an old franchise! I’ve always been a fan of the Ghostbusters movies, and it’s that same excitement and fun of the movies that is well executed in the game. It definitely exceeded my expectations for what a Ghostbusters video game could be.

First off, Ghostbusters Wii is nothing like the DS version, so let’s just make that perfectly clear right now :) 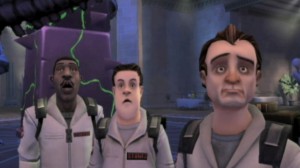 The storyline for the Wii version follows your character as a new recruit to the Ghostbusters team. You’ve been selected for your brilliance and….the fact that you can carry a backpack and shoot things :) So as a new recruit, your first mission is to retrieve Slimer who has escaped from Ghostbusters HQ once again and is wreaking havoc at the hotel downtown. The first mission is mostly about getting used to the Wii controls and how to capture ghosts. Movement is done using the nunchuk while aiming and shooting the proton beam is done using the Wii remote. The controls feel really good and have definitely come a long way since our play through at NY Comic Con earlier this year. Your main mission throughout the game is to find and get rid of Gozer, one of the big bad ghouls in the game. And you have to fight through a lot of other baddies before getting a chance at him. 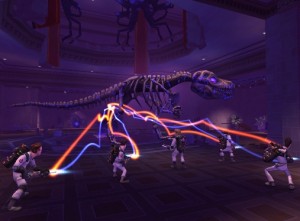 You’ll notice as you progress through the game that it’s fully voice-acted. If you’ve seen the original movies, then you’ll notice some familiar voices such as Harold Ramis and Dan Aykroyd. The voice acting is really good and you’ll find yourself laughing at some of the crazy things your partners say. It’s one of the more notable examples of voice acting for recent games.

The gameplay is simplistic, but very satisfying. Basically your goal is to bust ghosts, then bust some more. It sounds simple but there’s a lot of great nuances to appreciate. For instance, there was one battle where you’re fighting the Stay Puft marshmallow man on the side of building. You’re at the top of the building trying to prevent him from climbing up. You have to use your environment to hurl pieces of the building and projectiles back at him in order to defeat him. There are many other examples as well where the environment plays a key in defeating an enemy. In order to ‘wrangle’ a ghost, you’ll have to wear it down by firing the proton beam or some of your other weapons. Once it’s life meter is down, they you can hold the B trigger down and you’ll have onscreen cues for which direction to move the Wii remote. So once you have him locked on, you’ll have to throw the remote side to side to subdue the ghost until it’ll finally be ready for capture. And it’s quite satisfying afterwards. 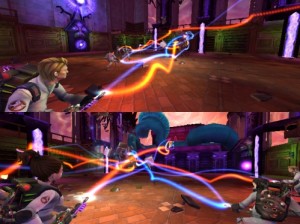 Graphically, Atari did very well with the Wii version. The characters are more ‘cartoony’ looking, but I think that adds a nice, comical charm that’s missed in the 360 and PS3 versions. You’ll also notice that all the environments are destructible, which plays a big part in the game—The more you destroy on your missions, the more money the city will reimburse you for :) It’s pretty satisfying after a mission and seeing that you single-handedly caused over $45,000 in damages :) There’s not a lot of detail in the environments, but there’s enough and the frame rate never dips as a result.

By far one of the coolest inclusions is the co-op mode. You can pair up with a friend and play through certain missions, or through the whole game if you want! It’s really cool cause you could play through most of the game in single player, and then get a friend to help when you get to a tough boss. And having a friend along definitely helps your chances. While your wrangling the ghosts, the other person can throw out the trap or you can even doubly wrangle ghosts as well. The co-op mode adds a lot of depth to the game and a lot of replay value, especially since there are 3 difficulty modes to conquer.

Ghostbusters: The Video Game is one of the best movie-to-video game adaptations in a long, long time! Granted, the last Ghostbusters movie was about 20 years ago, but it still provides a great reason for return of the series. The storyline, jokes, gameplay, and co-op are all great reasons to get Ghostbusters! You’ll find that there are plenty of unlockables as well as levels of difficulty to unlock that’ll keep you busy for quite some time. If you’re looking for a fun escape from some of the other summer titles, then Ghostbusters is the game for you!