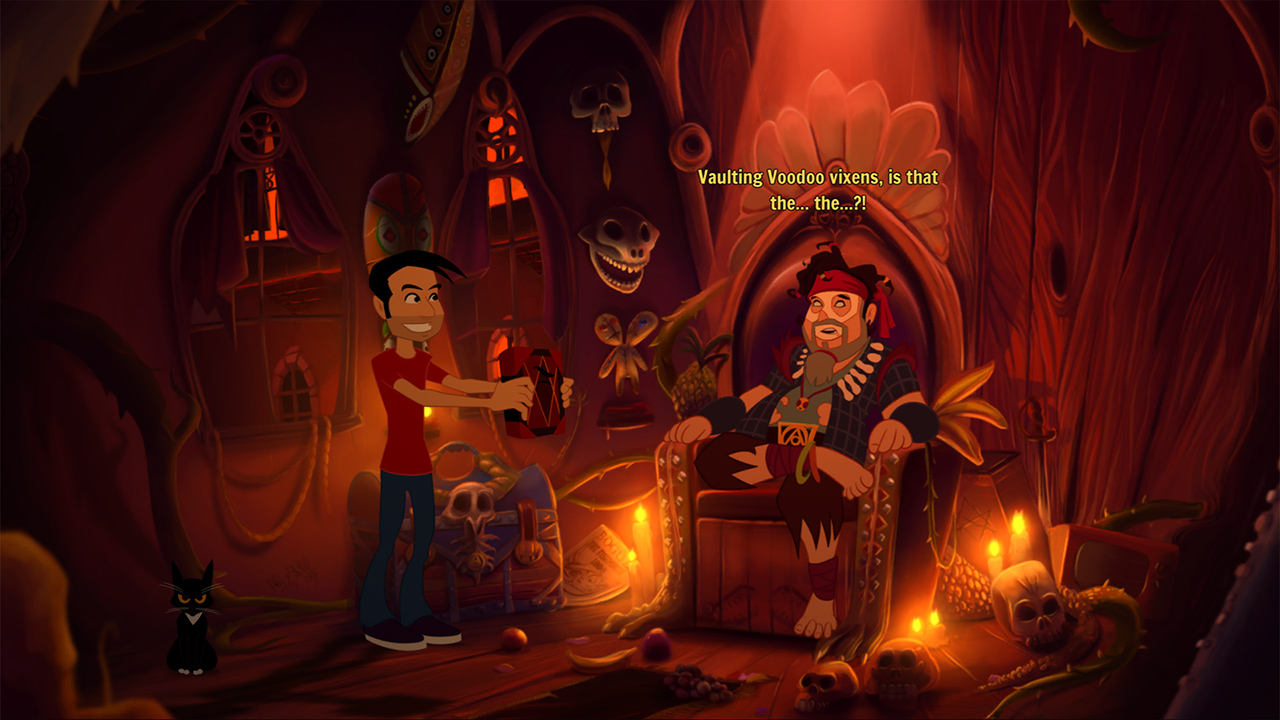 Cute, funny and starring a sassy talking cat, Gibbous – A Cthulhu Adventure launches you immediately into all the mystery and intrigue. The plot centres around a classically Lovecraftian cult bent on raising Eldritch horrors from the depth of the ocean. To do so, they need the fabled Necronomicon, a dark and ancient tome with magical powers.

You explore the conspiracy from the perspective of an unlikely team of three: Don R. Ketype, a private investigator afflicted with the Haunter’s Mark; Buzz Kerwan, a librarian who stumbles across the Necronomicon; and Kitteh, Buzz’s cat, who is accidentally cursed with human speech. As a player, you play as each of the three in different chapters of the story. The lends the gameplay a bit of variety and lets you explore more of the story and the world by switching perspectives.

Gibbous – A Cthulhu Adventure is a point-and-click story that works really nicely on the Switch. For the most part, it is clear which elements of the background you can interact with, without them being so obvious you lose any immersion in the setting. Having the option of using the analog stick or the touchscreen is a nice feature that feels like it should be a given in point-and-click games but isn’t always there. 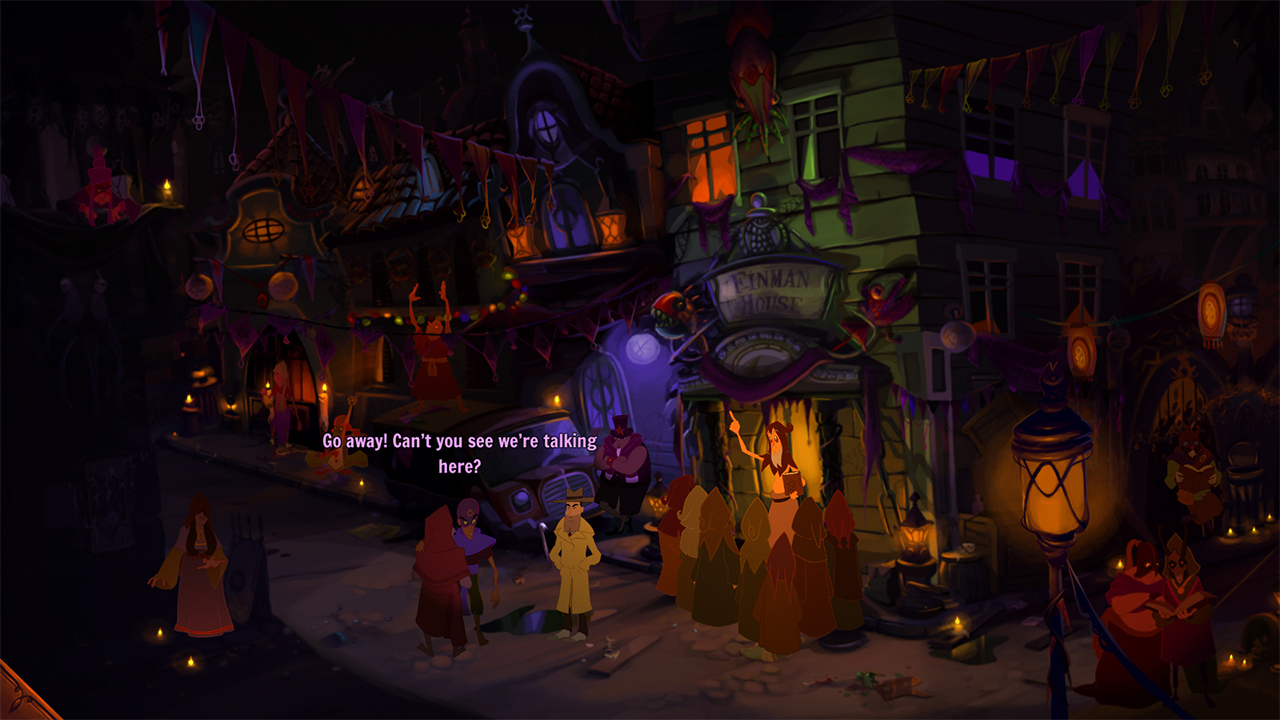 The entire game is voice acted really well, with distinct character voices that suit their design and develop the sense of each unique personality. This is particularly impressive given that there are over sixty characters, including all the secondary and background parts.

The visuals are equally well crafted, with wonderfully detailed backgrounds depicting various parts of the world. Each is imbued with its own clear identity, while the overarching themes of ancient horror and cosmic comedy are woven seamlessly in.

The gameplay is simple. You interact with objects in each setting, collecting and combining items you might need and talking to the background characters. When you play as Buzz, you can discuss each thing with Kitteh, and she usually has some hilariously dry remark for you. When you play as Don, the Haunter’s Mark allows you to peer into that thing or person’s past in search of more clues. 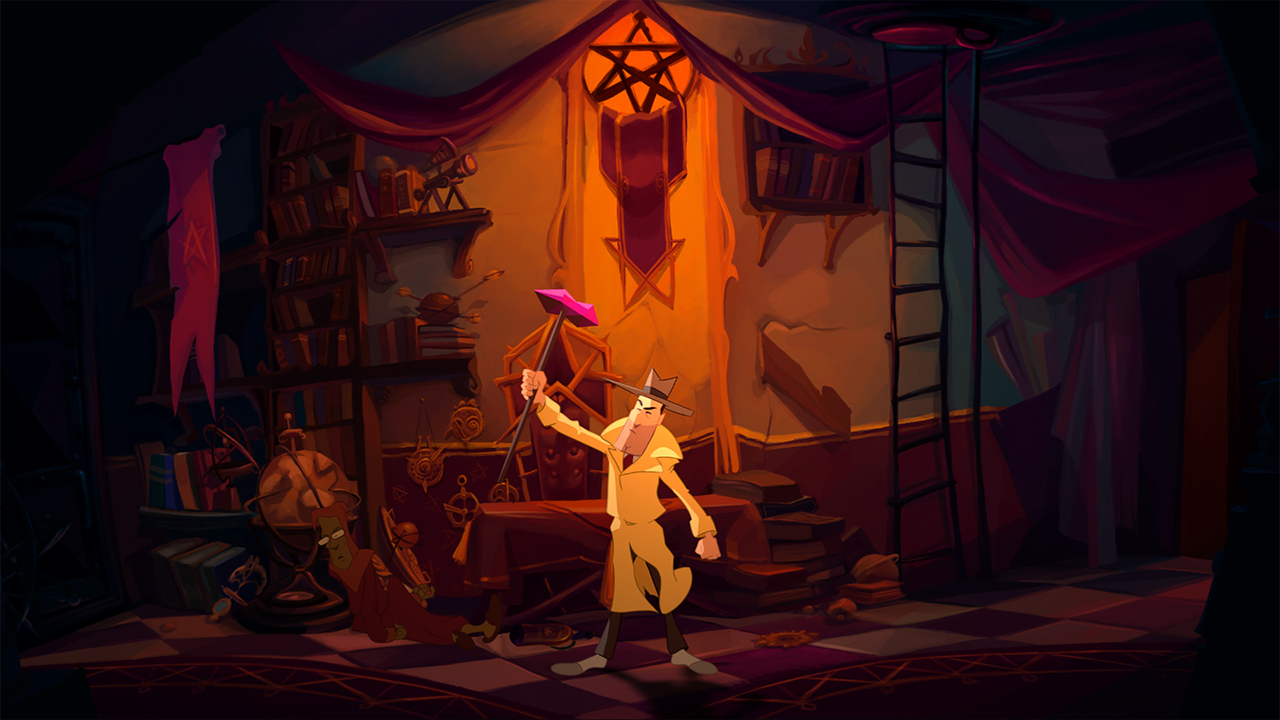 As with many point-and-click stories, if you click on every option, you could guess your way through most of the game. But the story is constructed in such a way that you feel genuinely engaged with the mystery, with clear but not obvious clues that tease their eventual reveals effectively.

Gibbous – A Cthulhu Adventure strikes a great balance between horror and humour, blended with a lovely film noir vibe. The animation is lovely to watch, and the point-and-click mechanics are very well suited to the Switch controls. It is well constructed and, if you like a side of laughs with your rampaging Elder Gods, you’ll certainly find it here.

Gibbous – A Cthulhu Adventure injects a dry sense of humour into classic Lovecraftian horror and absorbs you into the mystery through a beautifully animated point-and-click story.