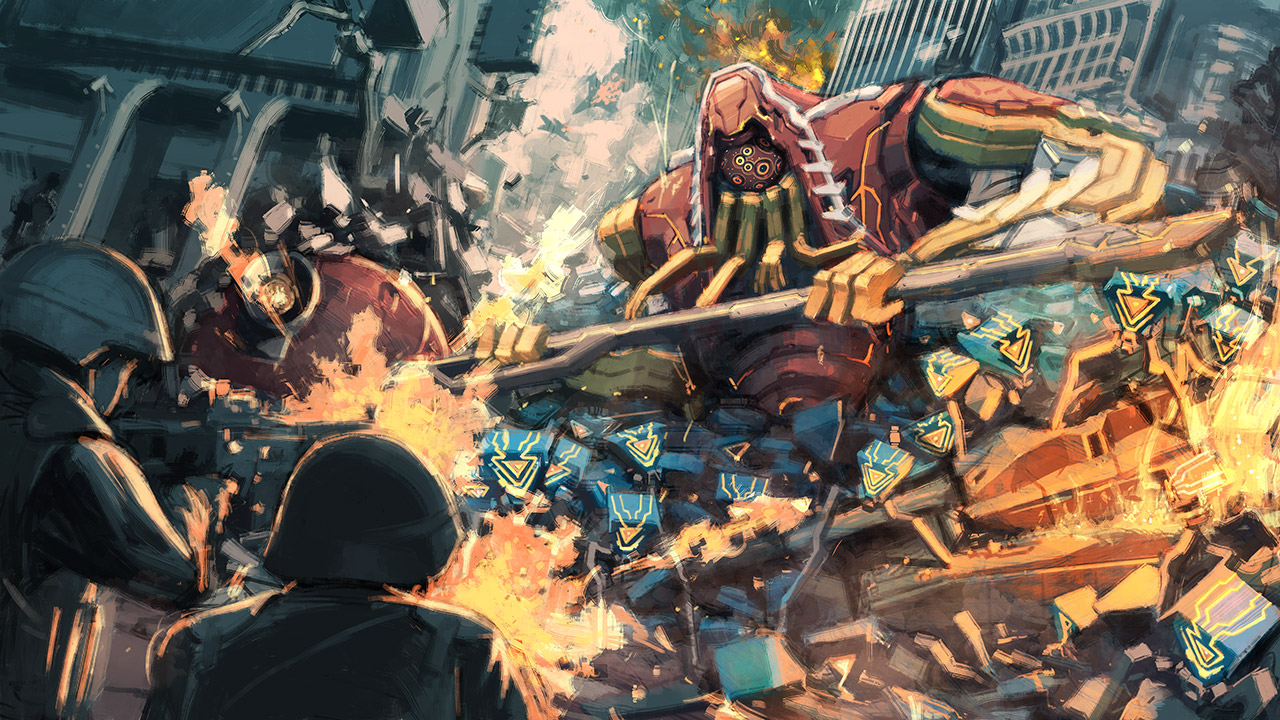 In classic anime fashion, Giga Wrecker Alt places you in an apocalyptic future as a Japanese schoolgirl who just wants to survive but is thrust into a position where she has the power to fight the disaster around her.

Without too many spoilers (and at this point in game development there don’t seem to be many real spoilers left), let’s start with the storyline. The game starts with Reike (you) sitting in a prison cell, trapped by the horrible robots that invaded earth and destroyed almost everyone. After some hullabaloo with a mysterious stranger, you find yourself out of your cell and on the run.

Not so fast, princess—nobody gets away from the robot overlords that easily. You suffer some serious damage but, fortunately for you, there is a slightly twisted scientist who puts you back together—along with some “enhancements.”  Welcome to the cyborg clan. There is a limitation with your new gear; you don’t know how to use it and the hints and information coming from your new “friend” sometimes come just after you could really use it. But now you have an artificial arm you can use to smash enemies and gather debris. 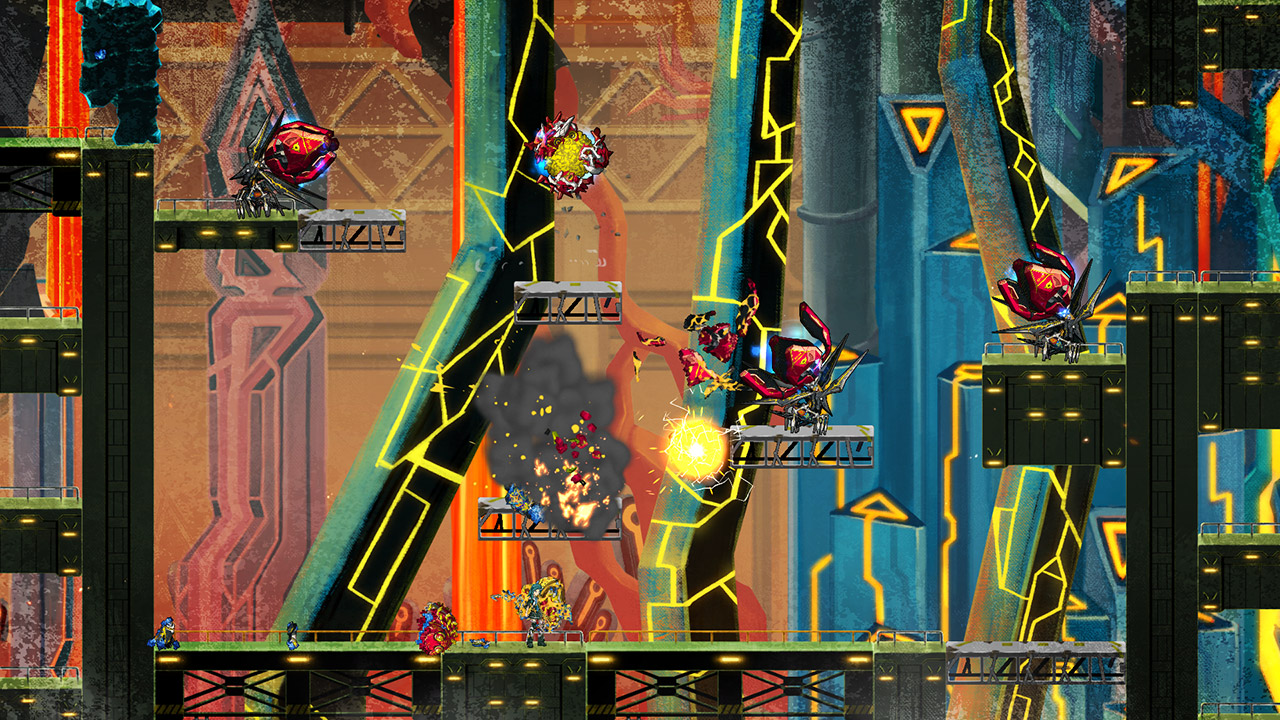 What good is debris you ask? In this game, the floating ball of debris you gather can be used as extra mass for your artificial arm, so the bigger the mass you carry the more pow in your punch. You can almost reach a Batman level of power where the word “POW” materializes in the air when you lay the smackdown on your target. Don’t get too happy about your new punching abilities, as not every enemy can be overcome with a big right hand.

You do get to run around smashing things in Giga Wrecker Alt, but you will also have to do some puzzle solving to get through the many areas and all their wonderful hazards, traps, and bad guys just so you can get the next boss. The debris can also, in certain places, be used to make blocks to jump on or other things that can help you get through the level. 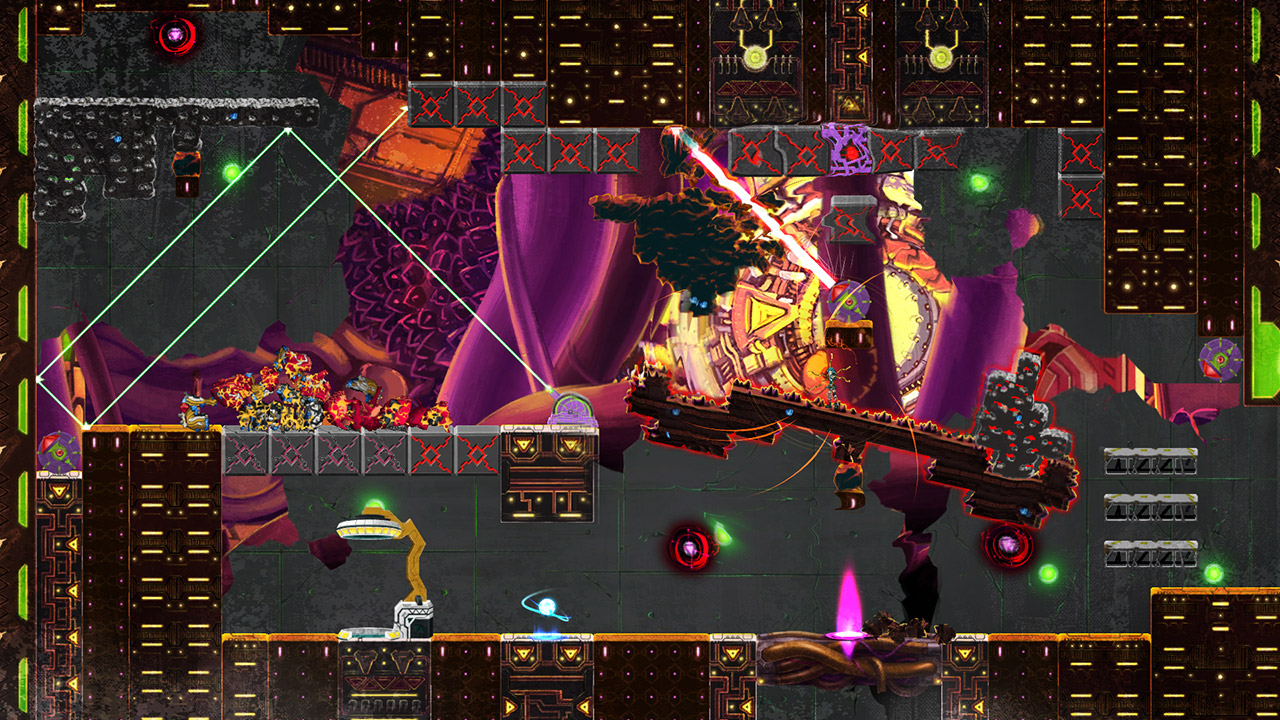 Don’t think that just because you can see how to solve the room you can just do it. The game relies on a mostly real physics engine, so things may not fall into place (literally) the way you want or need. Sometimes, you have to execute a certain action in a very precise way for all the stars to align so you can clear a level. This tends to get a bit annoying when you are forced to play around a dozen times because you’re trying to line up a shot or get the timing just right to attach a rocket to a clump of stuff.

At his point, the game does provide a bit of annoying grace. The grace is that there are tachyon generator points scattered about that you can use to jump back in time. This resets your surroundings, including the hazards and resources. Now you can retry that shot, but you may also have to kill some robots again. The annoying part is that, to use this handy device, you have to stand on the tachyon generator and push “up” on the movement joystick. What’s so bad about that? The controls can be sensitive, so it is very easy to time jump when you don’t want to—like when you just finished that particularly tricky maneuver you had to try eight times to get right and you have to jump next to the tachyon generator (B button) to get to the bridge piece…you get the idea. 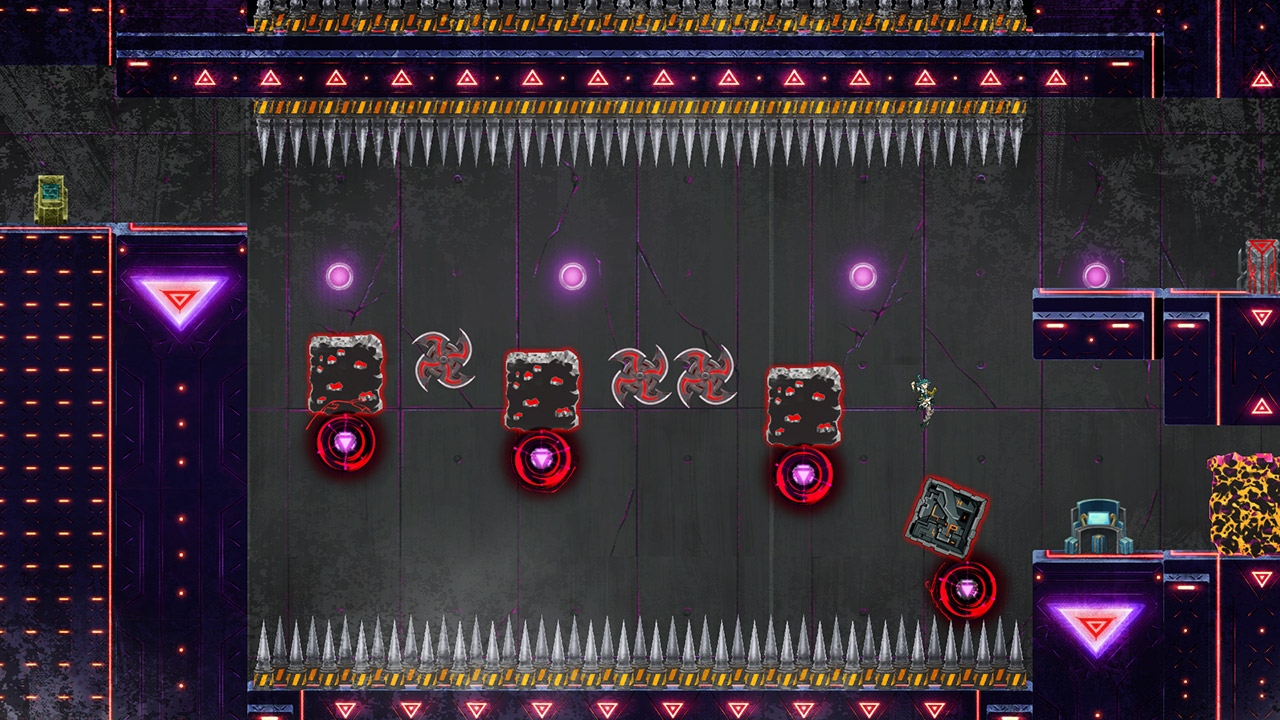 Giga Wrecker Alt may be “just” a 2D platformer, but the visuals are interesting. The game looks better in docked mode because some of the details are on the small side. The soundtrack is enjoyable as well. When it comes to the dialogue, it is mostly what you might expect given the theme of the game. It gets a bit frustrating when it comes to repeating a scene or event as there is no way to skip any of the dialogue. If you accidentally try to attack a pile of rubble instead of turning around to leave, you will have to push your Joy-Con button to advance through every frame of text. Every. Single. Time. You. Initiate. The. Dialogue. For. The. Event. (ugh) The game really needs a skip dialogue feature to keep from wasting so much time.

Giga Wrecker Alt is a pretty cool game. It has some issues and likely won’t compel all players to keep going, but the puzzles are good, and getting to throw a ton of junk to smash a robot is always fun. The game looks good, sounds good, and offers plenty of play time, so get in there and wreck it.