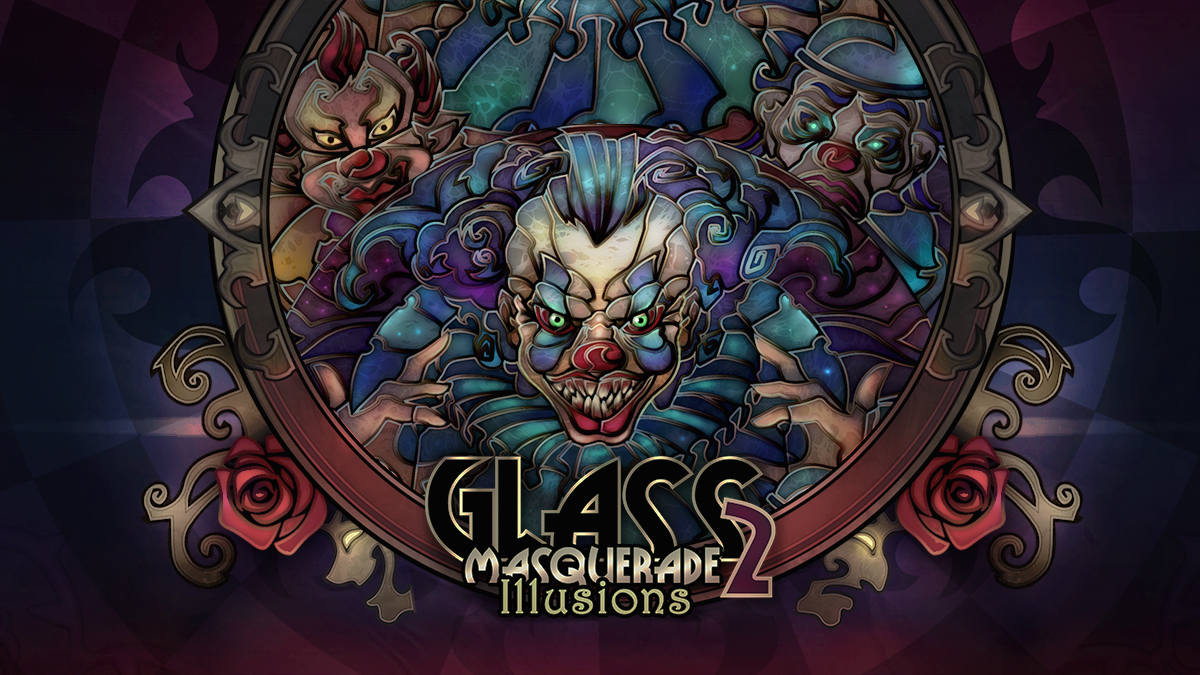 Shatter your illusions of what a puzzle game should be.

Are there still fans of jigsaw puzzles out there? I see them in stores and those mall kiosks (are there still fans of malls?), but I don’t know anyone who buys them or puts them together. I was always more of a modeling guy myself, and actually have a Space Battleship Yamato kit I’d have to start before digging into a new puzzle.

But that doesn’t apply to videogames, where Digerati’s Glass Masquerade 2: Illusions has taken up considerably more of my TV time than I would’ve expected when accepting the review code.

There are numerous reasons why I find this puzzle game so captivating, not the least of which is the artwork. Each of the 30+ puzzles is presented in a circular, stained-glass style with baroque-at-Mardi-Gras leanings. Stained-glass art is usually depicted with bright, bold colors as if properly illuminated from behind, but Glass Masquerade 2 instead uses sharp contrasts between light and dark to create a more…well, the developers call it “dreamlike” vibe, but I think it’s just kind of creepy. 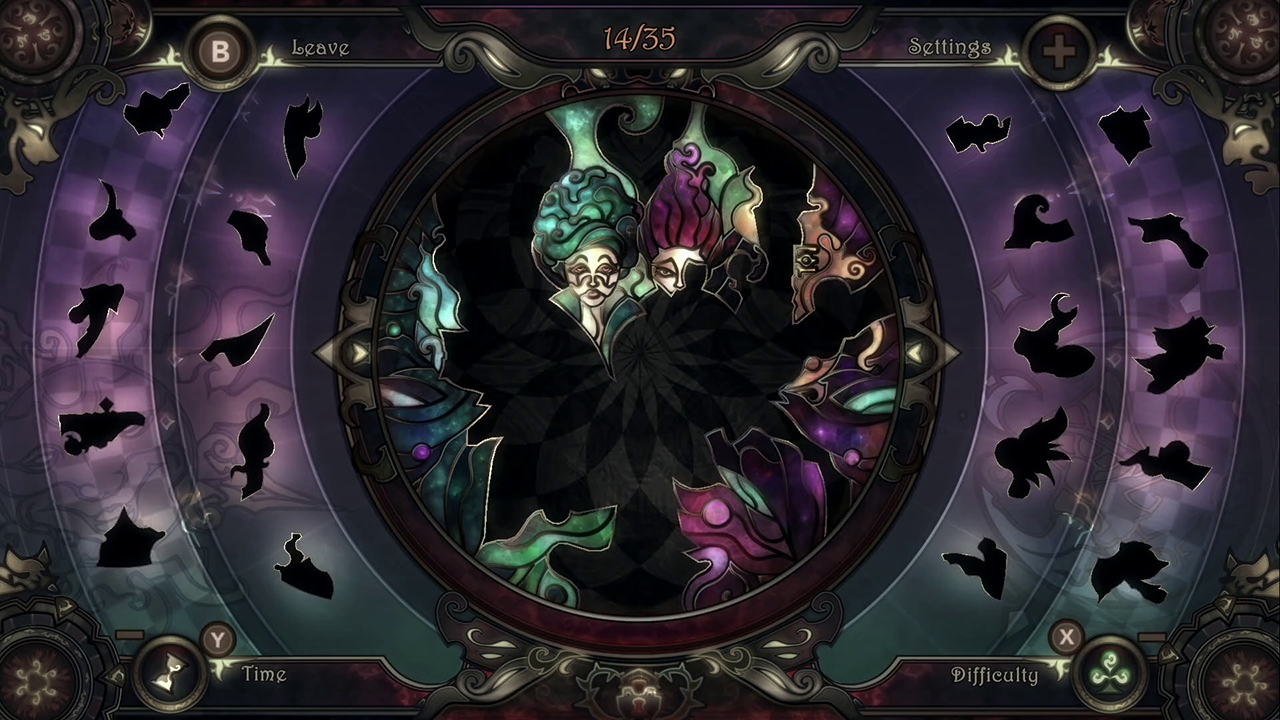 Each puzzle starts you off with all of the pieces floating around the center in a circular pattern. You can set the skill level to indicate which edge pieces to use at the start, but you’re then left with nothing but random, often complicated shapes. Unlike normal puzzles which require you to identify which portion of the picture is in the repeating fragment patterns, Glass Masquerade forces you to consider the shape. Each piece is completely black on the board, revealing its colors/pattern only when you select it. Even then, the colors aren’t much help because there’s no telling how two side-by-side pieces will relate to each other within the frame. This is stained-glass, remember, so the colors can (and most often do) change at any breaking point.

Thankfully, the pieces differ in shape quite drastically—as if the stained glass artwork actually has shattered. The erratic patterns provide strong visual clues as to where they go once you start moving along, but that doesn’t mean putting them together is easy. The number of starting pieces grows quite large as you move along, meaning fewer and fewer of those pieces are on screen at a time. As such, you have to cycle through them in hopes of detecting the outline quirk you seek. This is also complicated by the fact that the piece is rarely oriented properly when off to the side. Select it and the proper orientation is revealed along with the colors. Put it back down and these clues once again fade away. 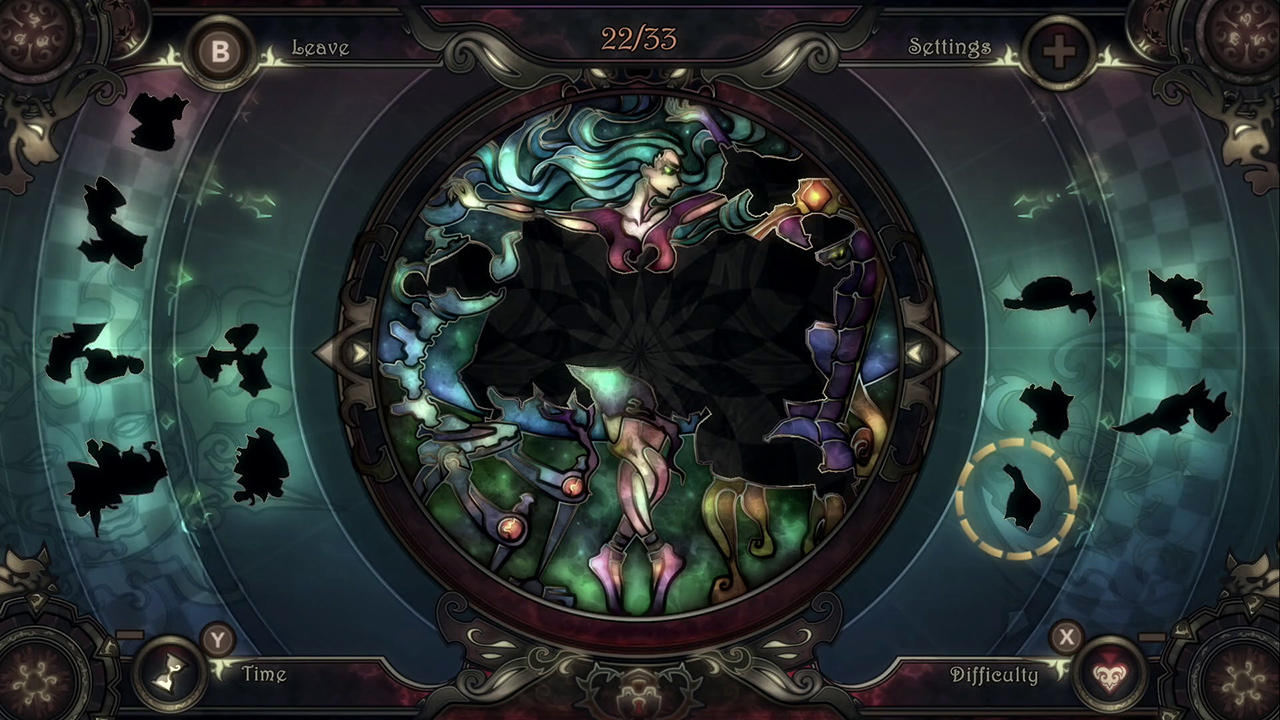 Various settings affect the overall difficulty and urgency of the game, but I found it most fun to just relax and take as much time as I needed. You may feel differently. Either way, my approach to Glass Masquerade 2 shifted as I dug deeper into it. The early puzzles were quickly solved, making it a fun game to play before or after longer sessions with other games. By the time I reached about 10 puzzles, however, I was now taking closer to 45 minutes to solve them. Glass Masquerade 2 had become the longer gaming session.

Perhaps the most impressive aspect, however, is the game’s longevity. You’re guided down the 30+ puzzles in a set path to gradually increase the difficulty. Upon being solved, each presents a quote that I think may be pulled from the rejected lyrics of Twenty One Pilots songs. 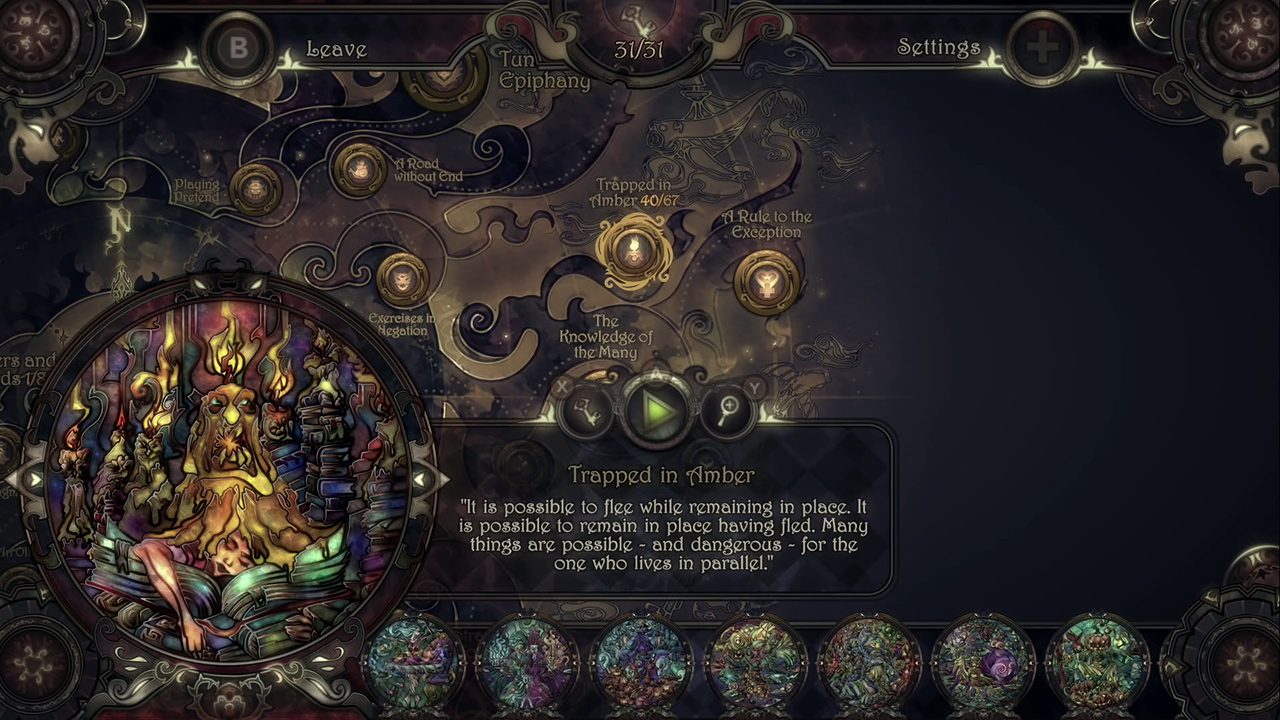 Because the artwork and the comprising pieces are so unique, there’s plenty of opportunity to solve them more than once. You can replay them to best your previous time or to try them at a higher degree of difficulty. That may not appeal to everyone, but should please puzzle purists.

My one caution with the game is that you really don’t want to try it in handheld mode, especially on the Switch Lite. I was able to get through a couple puzzles that way, but the variations in the fragments were often much harder to detect on the small screen.

You don’t have to be a puzzle aficionado to enjoy Glass Masquerade 2: Illusions. It helps, of course, as would an appreciation for quality artwork. What really matters here, though, is that the game is so well-crafted and presented that it serves as a captivating, ethereal way to spend time relaxing with your Switch.