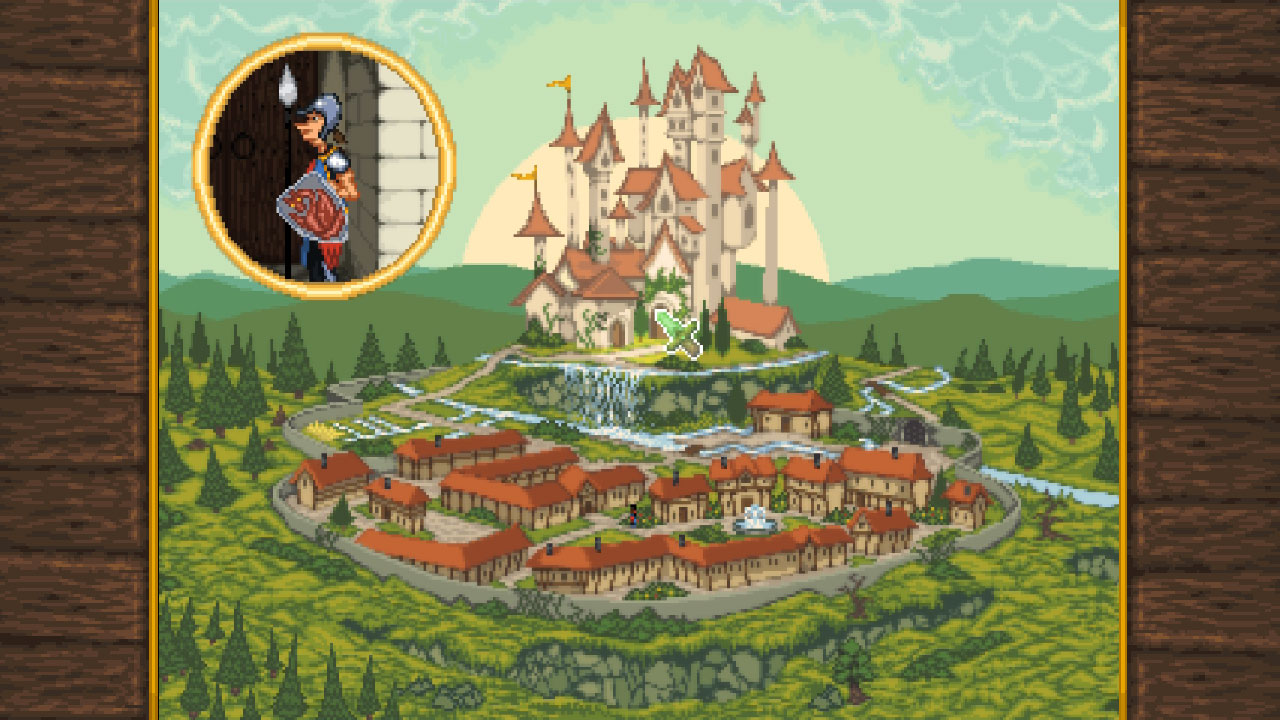 The name may be decidedly generic, but Guard Duty succeeds where it matters most, in gameplay. Namely, in how it respects the best traditions of the point-and-click graphic adventure genre.

Key to that is having so much to click on, and being able to hear descriptions of everything. This is the sort of attention to detail that patient players (and those who want to get lost in the story) will eat up with glee. Not that the tale is absent of issues. Blending the medieval past with futuristic sci-fi makes Guard Duty feel more like two distinct games duct-taped together. It’s not just from the change in setting either, but even the mechanics; one part having traditional inventory while the other has a context-sensitive scheme. Still, this brings variety to the table.

You start as Tonbert—a knight out to save a princess—whose delivery made me laugh out loud more than once. Early in the game, he gets stung by bees, so he takes on a bit of a Mr. Bean accent. Later, you play as Agent Starborn, whose Solid Snake accent is occasionally distracting. Multiple characters share the same voice actor, but that’s understandable for a game that’s only $9.99. At that price, the amount of voice work should make developers with bigger budgets think twice about neglecting this game-enhancing audio touch.

Some voice inconsistencies aside, most of the secondary characters are also enjoyable. Although some have clear-cut room for improvement, needing more of a chance to be developed. The genre recipe has been (more or less) nailed; it just needs more time in the oven to fully realize the promise.

I think some of these development shortcomings stem from the setup. Does this game want magical explanations for characters or sci-fi ones? Does it want to be funny or dark? Some story ideas seem to get batted around without directly landing, and a better union between the two time periods probably would’ve resulted in additional characters leaving more of an impression.

Unlike Sierra titles (think Kings Quest), Guard Duty won’t kill you for walking on the wrong screen. It’s more like LucasArts games in that regard. Any time you seem to have failed (in either time period), rest assured it’s part of the story. You’ll never fail from the controls, which are quick and smooth, even when bypassing the touch screen.

Visually, the animations and pixel art remind me of some of my favorite genre favorites from the ’90s. Acts in the earlier time period fare especially stong, benefiting by more brightness, diversity, and color. However, the fullscreen aspect ratio can stay in the 90s as far as I’m concerned. Some “traditional” aspects do not need revisiting.

If you’re experienced with the genre, this game will only take so long to see the end credits. I wouldn’t have minded a longer visit in the world of Guard Duty, a chance for the story to be tightened. It won’t endure as a favorite but, at just $9.99, it never had to. The length is fine for the price.

If you’re a big fan of point-and-click adventures, especially those respecting the genre’s heyday, you’ll find Guard Duty to be a good game. I can’t give it as high a recommendation as first thought due to some story aspects and the way they’re intertwined, but I liked it enough that I’m hoping for a sequel. If it’s funded by Kickstarter, I hope the backers have enough sense to push for a less generic name, too. Good games don’t deserve to be overlooked by bad naming.

If you’re a big fan of point-and-click adventures, especially those respecting the genre’s heyday, you’ll find Guard Duty to be a good game. I can’t give it as high a recommendation as first thought due to some story aspects and the way they’re intertwined, but I liked it enough that I’m hoping for a sequel.