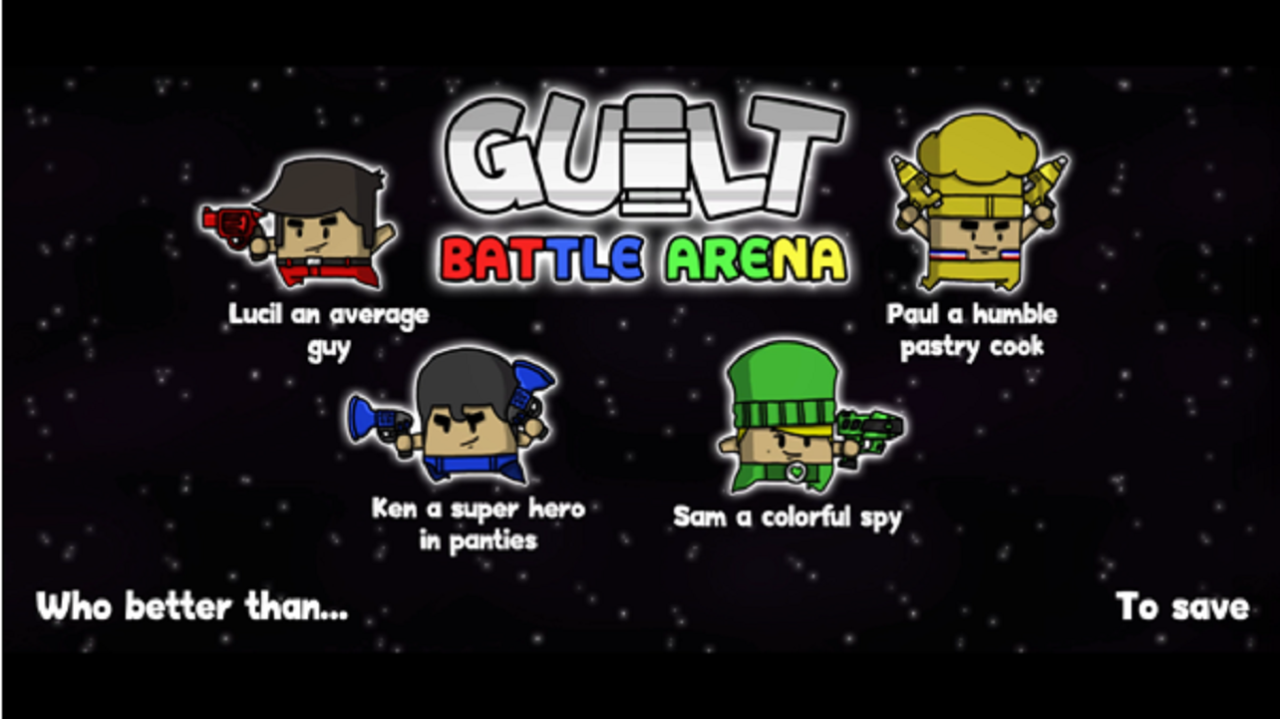 Guilt Battle Arena is a 2D, level-based hoard survival game, playable alone or with a friend in co-op. You play as a character of your choice, from a selection of 47, and try your best to dodge and shoot increasingly fast-moving waves of enemies until you inevitably lose all three hearts and die. Using just two buttons and an analogue stick/d-pad, you have the power to jump, boost sideways and downwards, and shoot your gun, all within a small space packed with enemies. The compactness of the levels is where the fun comes from. Enemies spawn at the far left and right of the screen, each holding a different shaped blade as they stroll through the level to the other side. Meanwhile, you must think fast to manoeuvre your way between them, while shooting and chasing your only bullet to retrieve it after each shot. 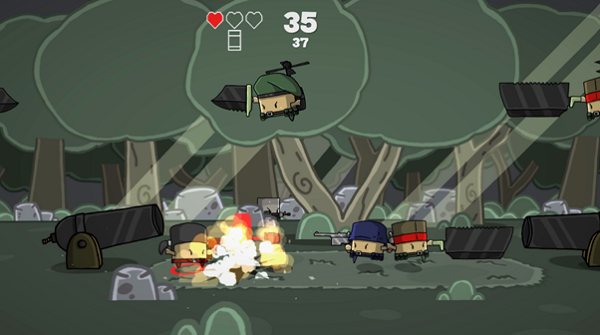 Close calls and slick getaways are common and are the main thrill of the game, but surrounding this solid core is, unfortunately, not much variety. There are only six levels, each of which recycles the same flat level layout and the same enemy types, just wrapped in a different visual theme. Each level does add one new obstacle, but in one case, it comes in the form of explosive cats that randomly spawn and land on the edge of the map without notice, hitting you immediately if you happen to be there. Frustrating deaths aren’t limited to just that level, all levels feature enemies whose weapon hit boxes don’t exactly match their visual appearance. These issues, topped off by annoyingly violent HD rumble, make it easier to stop playing an otherwise very addictive game. It’s fun striving to achieve a new high score for each level as you watch your skills improve every play. 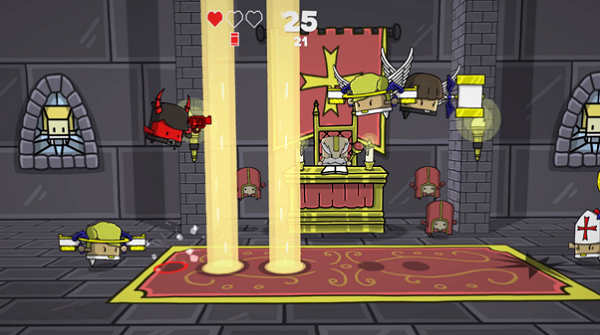 Outside of gameplay, the solo/co-op campaign offers a decent soundtrack including one unique tune per level, usually matching the visual theme which is always well realized in the game’s appealing art style. The graphics work well with the comedic nature of the game, which won’t have you laughing out loud but should put a smile on your face during the two short cutscenes and in the background details of each level.

A big emphasis for Guilt Battle Arena is local multiplayer through its versus mode. Two to four players face each other in the same maps from the hoard mode with the objective generally being to shoot the other players and be the last alive. However, the rules are more nuanced than a simple free-for-all as six of the seven different modes add a twist to the action such as a missile that homes in on the last player to have been shot, or a hot potato passed between players when hit. Combine the variety of game modes with the six optional modifiers such as invisibility, jetpacks, and more, you end up with a recipe for fun chaotic multiplayer. Game modes and modifiers can even be randomized creating surprising and funny setups. Unfortunately, there is one big omission from the versus mode, bots. Versus shines best with four players and having AI can help replicate that when only two or three players are available. This is especially important here as the skill gap can be a little too wide between the owner of the game and their friends who might not have played before; a heavily one-sided one vs one game is never fun. Fortunately, bots are expected to be added in an upcoming April update, but that still won’t solve the other big issue with multiplayer, which is controls. If you’ve got enough pro controllers and Joy-Con pairs to go around, you won’t be affected by the game’s poor analogue stick controls. Angles required to recognise a sideways movement are too tight, and due to the need to reset the stick between movements, it also takes longer to boost twice with a stick than a d-pad or directional buttons.

There’s potential for a great game here, both for multiplayer and single-player, it just needs a lot more content and extra polish through more meticulous playtesting. As it stands, some might find Guilt Battle Arena worth buying, but only if on sale closer to half the full price of $10.

A solid foundation that’s fun to improve your skills at and is ideal to quickly load up for a couple of minutes at a time. With more content and shinier polish, this game might have been easier to justifiable at its current price