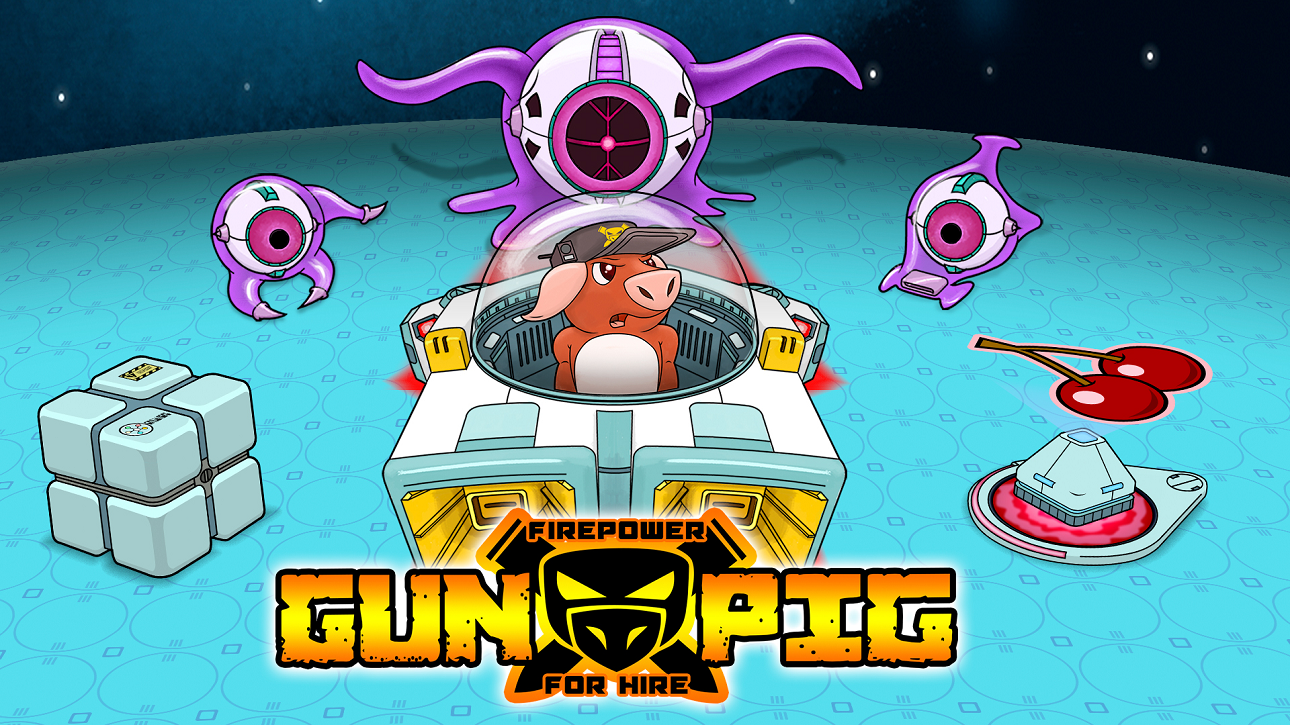 GUNPIG: Firepower For Hire is a short but fun dual-stick shooter. While it doesn’t necessarily have any real standout features, it accomplishes what it needs to.

You control a pig named Bax out to rid a space academy of alien hordes. The swine mascot is always visible in the corner, reacting to what’s going on. Still, I admit there was a missed opportunity for a bit of voice work. Perhaps the fear was vocal clips could annoy, but they also would’ve added some fun personality.

Firepower is part of the title, and thankfully this game delivers on that end. The weapon variety hits the spot. There are powerful weapons, quick weapons, and weapons that have a wide range. I quite enjoy experimenting with the varied ammunition. If you don’t have the appropriate weapon against a boss, they can take you down quickly. The game is still easier overall, with many enemies dropping shield energy to replenish your health bar.

Speaking of enemies, I rather enjoyed the variety of robot space monsters. Some are insect-like, some chase and spin at you, and others fire from a stationary position. You can play as a completionist and aim to take them all out. Each area, or level, has bonuses and secrets to improve your score; you can blow out walls to reveal hidden spots, encouraging some exploration. Or, you can search for the end boss in more of a speedrunning approach.

Having expanded leaderboards is one aspect GUNPIG should look at. Showing your top and most recent runs is a start, but I’d like to see proper boards. Local, where you can enter initials in true arcade fashion, and even online (separated by different scores) to give the game more legs.

While I’m mentioning arcade fashion, GUNPIG currently has no save system. I get that old-school arcade approach. The game is short, too – less than an hour – so saving isn’t vital. Still, on a hybrid console like Nintendo Switch, where you may only play for a few minutes, a save system would’ve been a thoughtful inclusion for the audience. Even the Arcade Archives and NeoGeo games let you save; it’s more a matter of convenience.

GUNPIG controls very well, which is especially important as games like this aren’t uncommon on the Switch. You have the option to invert the controls if you like. The game doesn’t have time to get repetitive, and a couple of fun bonus levels help break things up. It has a well-fitting soundtrack that adds to the fun.

GUNPIG: Firepower For Hire does what it must for the modest cost of $4.99. It teases a sequel – “Bax will return…” – and I hope the followup brings expanded leaderboards, a save system, and maybe even a two-player mode. But if you’re a fan of top-down dual-stick shooters, this entry is solid fun and replayable.

GUNPIG: Firepower For Hire does what it must for the modest cost of $4.99. It teases a sequel – “Bax will return…” – and I hope the followup brings expanded leaderboards, a save system, and maybe even a two-player mode. But if you’re a fan of top-down dual-stick shooters, this entry is solid fun and replayable.