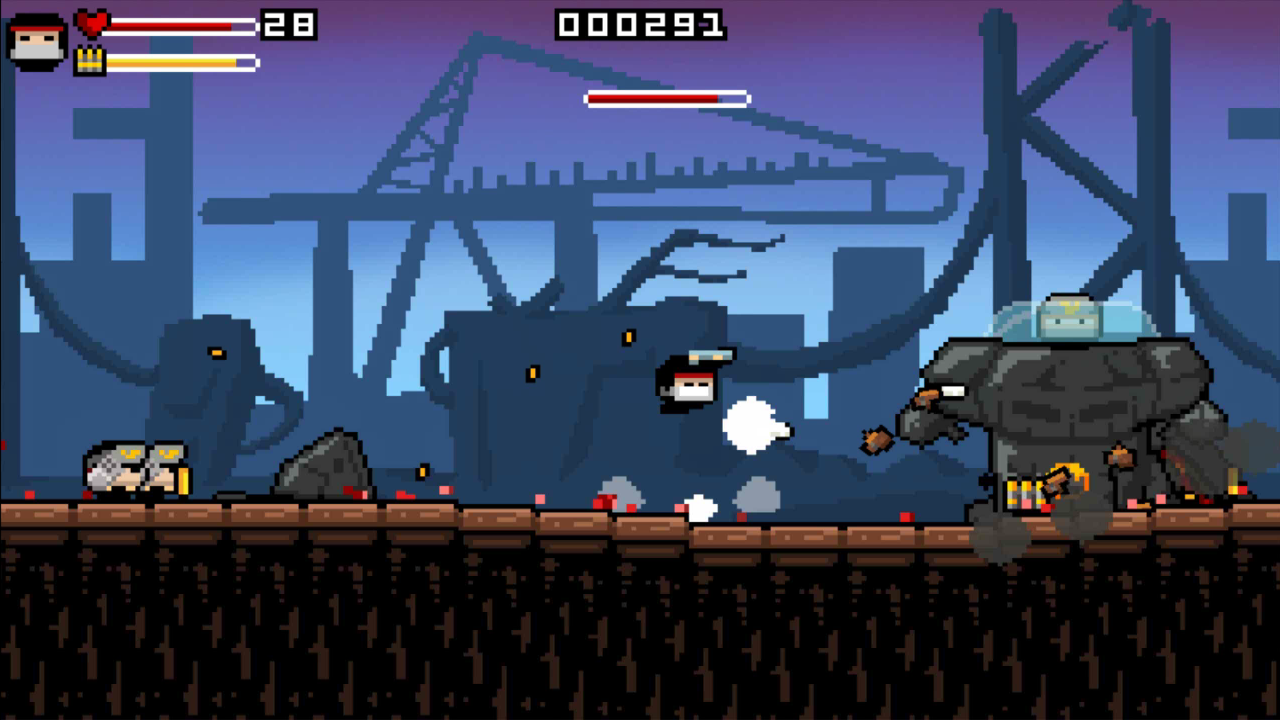 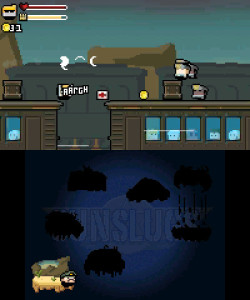 Gunslugs II is a run and gun shooter with a decidedly retro look.  While the trailer showed some promise, the gameplay has proven terribly repetitive, and has made for some surprisingly dull stretches.  Not helping matters is the 3DS lacking a port of the original Gunslugs.  Though not a story driven game, some context would’ve been valuable.  What limited dialogue there is attempts to incorporate pop culture humor, but more often than not falls flat.  Perhaps it’s because the characters show no personality?

The gameplay consists of working your way from building to building.  You go to the top, blow it up, and move on to the next.  Eventually you’ll board a helicopter and move to a new level to repeat the process.  A deluge of enemies will continually try to stop you.  Occasionally you’ll battle a large boss, though curiously the normal enemies continue flooding the screen, seriously lessening the impact.  The game can definitely grow underwhelming, though there is some entertainment in small doses. 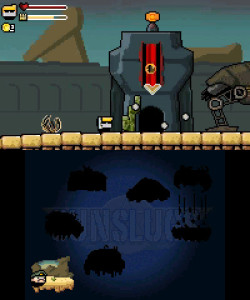 There is such a thing as too much on screen, and at times it’s awfully hard to see what’s hitting you.  I think some restraint in design would’ve been appropriate here.  It might not have been an issue had the weapons been more balanced.  With the exception of the flamethrower though, I found them weaker than expected, especially when compared to the enemies’ firepower.  It was often easier simply trying to rush past the baddies.  Once inside buildings, you’ll find playable characters to rescue. Doing so means losing your existing armor and weapons, sadly, though it does give you control of them with fresh health.

This game isn’t just very repetitive, it’s also very difficult; a dangerous combination.  I’m unaccustomed to playing a game like this where even the standard weapon runs out of ammo. Playing with just a knife is useless, and no fun.  Also, far too many of the hits you take are beyond your control.  For instance, enemies tend to crowd the tops of ladders in buildings, meaning you’ll take multiple unavoidable hits trying to progress.  There’s also some procedural generation, so you may enter a door only to have enemies blocking your way for more hits. 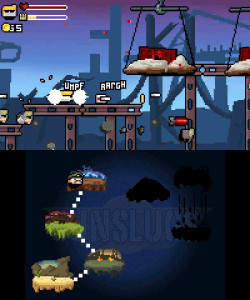 The retro visuals start off a bit muted, but by the time you reach the third area, some much welcomed color is introduced.  There is 3D, but sadly I found the game ran smoother when it was disabled – it also made the display easier on my eyes. The music fits the action oriented gameplay, and I rather enjoyed it while playing.  You can mute it (or the sound effects) though if not to your liking.

The controls are quite basic, but there’s some definite quirks.  For starters, there’s no way to map the controls to your preference. Worse is pausing the game.  You hit start to pause, but hitting start again bizarrely boots you out of the level!  With thirty years of gaming muscle memory I can’t tell you how often I did that.  How in the world did such a fundamental thing get past the 3DS playtesting? It may sound small on paper, but believe me in practice it’s terribly annoying! 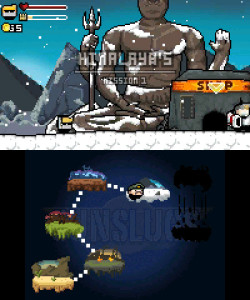 There are a couple extra modes.  Arcade seems to be the main game, but with a single life bar.  Did I mention your health doesn’t reset between levels? With no proper scoring method, this mode seems pointless.  As for daily challenge, it places you in a larger-sized building where you try to get to the top quickly.  With no way to compare times though, how much value does this mode have?  Needless to say I didn’t find either compelling, but I probably can’t overly criticize them since they are extras.

Overall, I found Gunslugs II to be dragged down by tedium.  This 3DS port is also subpar, with ineffective 3D, and some sizable control quirks.  It’s also double the price on 3DS versus mobile.  There’s some short-term fun here for sure, but I’ll wait for Orangepixels’ next 3DS game. Hopefully it will reflect less haphazard design, and fare better in the porting process.

Overall, I found Gunslugs II to be dragged down by tedium.