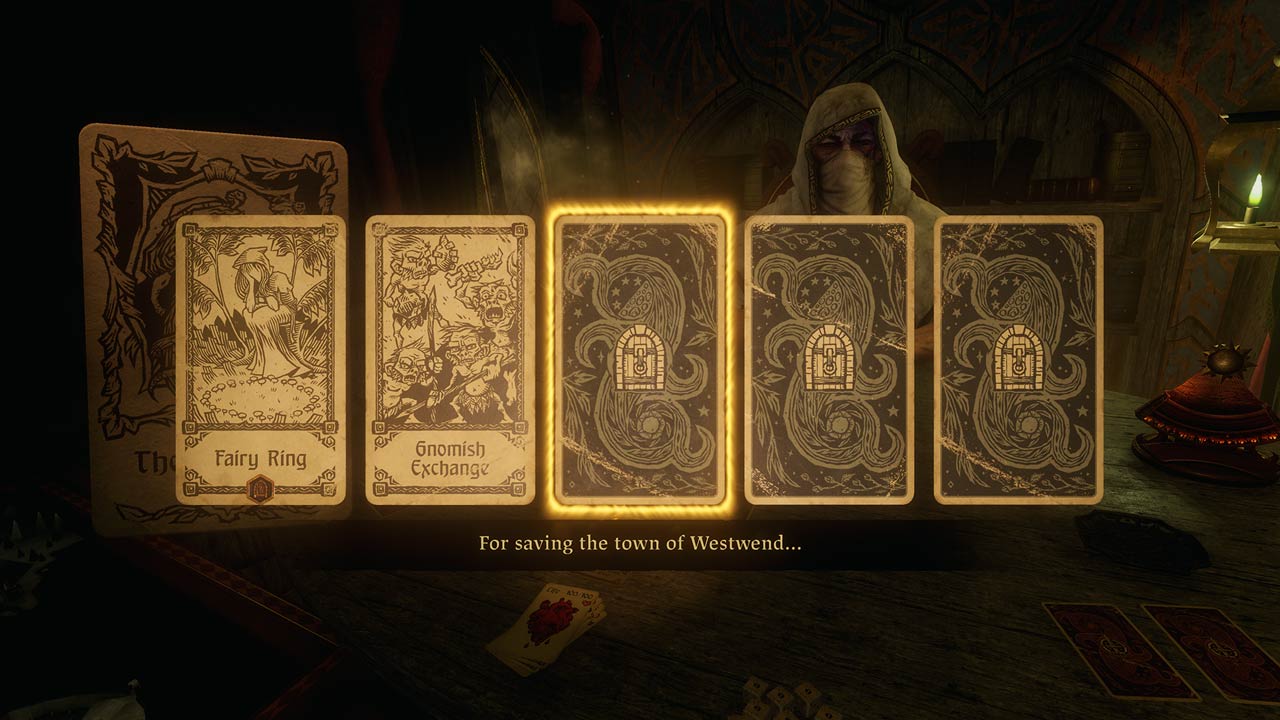 Hand of Fate 2 is a roguelite that combines deck building with hack ‘n slash action. Each level is short enough that the game plays easily in small bursts, but the whole crusade can last upwards of twenty hours. The game carries a strong hand with varied missions and countless unlockables, though a few things stop it from throwing a royal flush.

You spend most of the time sitting at a game table across from an eccentric dealer, with text largely presenting your journey. You move a player piece across an arrangement of cards, flipping each as you pass. Cards lead to an assortment of events. Some force you to make a call of judgment, a few have you partake in a game of chance, and others put you in a battle to the death. Each happening is largely determined by the deck you build before each mission. The cards in your possession represent a scenario you can encounter. This adds a level of strategy where you need to figure out which crescendos are most likely to provide the resources necessary for the trial ahead.

It is in battle where the Hand of Fate 2 switches from its table-top perspective and takes you into the world of the story. You take direct control of the protagonist to stab, slice, and chop away at monsters and villains. Every weapon has a satisfying weight; axes are slow and brooding while dual knives are quick and nimble. Unfortunately, there aren’t any combos to keep skirmishes fresh. Confrontation ultimately boils down to mashing attack while remembering to parry and dodge. Many weapons have a special ability that can be activated when keeping a consistent combo, which at least rewards careful play.

The developers were very smart to give you combat in small doses. It serves as more of a compliment to playing your cards right at the table than it does as your main course. Even in the pint-sized portions, running into fights too often can be a chore. If anything, the crux of the game lies in the deck building aspect. The cards you pick decide how much havoc you can wreak in a clash, yet even the best of decks can’t stop you from having terrible luck.

Unlocking more cards requires you to fulfill objectives not only in the level but also within many of the game’s cards themselves. But those objects are generally reliant on picking a correct card of four, rolling a high enough number with dice, or stopping at the sweet spot on a roulette. There are enchantments and ally skills that can let you roll another die or redo a botched draw, but bad luck can still lead you to miss out. Having to play a level for the umpteenth over a bad card draw is frustrating, to say the least.

Hand of Fate 2 merges tried and true conventions and creates a unique experience. While the individual components lean on the simpler side of things, as a whole the game is greater than the sum of its parts. It’s a game that’s best played in small chunks, making it a very good entry to the Switch library!

Hand of Fate 2 merges tried and true conventions and creates a unique experience. While the individual components lean on the simpler side of things, as a whole the game is greater than the sum of its parts. It’s a game that’s best played in small chunks, making it a very good entry to the Switch library!