The entire concept behind The Hand of Panda is an homage to mini-games such as the “test your might” sections spawned from Mortal Kombat, as well as other fighting games.  An admirable idea, but the concept fails to deliver solid entertainment past the first ten or so minutes.  Perhaps this is a sign that putting a spotlight on a mini-game concept is not the best approach to gameplay?

The entirety of The Hand of Panda’s gameplay is having the player press the correct button or D-Pad direction when its symbol appears on the center of the touch screen.  Once players grasp this concept, there won’t be much motivation to keep the player interested, even well into the game’s hard mode.  Though music has a large presence in this game, it is not connected with the gameplay in any way;  it is something simply to listen to whist pressing away.  Timing your presses correctly will increase your score, but also pause the game for a split-moment, which feels reminiscent of the Street Fighter series.  Aspects like this always made my commands feel much more significant, and packs a punch.  Unfortunately, I cannot say for certain whether or not this is actually a gameplay mechanic, since the effect only occurs sometimes; annoying in the easy mode, but really threw off my timing in hard mode. 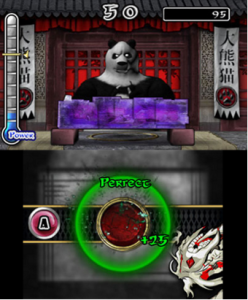 After so many correct button presses, players are presented with a chance to “show them your power”, which is considered the “finishing move” of the level.  By correctly timing your taps with the ring, the panda will release a dynamic, electrified strike towards whatever material has been chosen for the chopping.  Each level has a new and interesting material for players to match up against, but this ultimately feels like wasted effort, as the chopping animation never changes from level to level, and every piece of material broken falls in almost the exact same way.  The satisfaction of watching planks crumble before me washed away after conquering the entirety of easy mode. 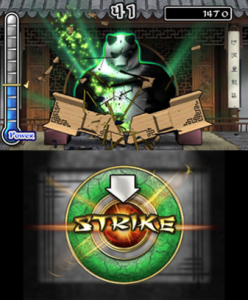 The story animations between modes are fun, and I would have enjoyed seeing more interaction between the Panda and his Koi teacher.  All that exists occurs in the opening cut-scene, and after the completion of every tower (the easy, medium, and hard modes).  Something as simple as a few more lines of dialogue could have breathed new life into this 3DS eShop game.

I’ve played through all of easy, medium, and hard mode, and ended with a total play time of 1 hour and 15 minutes; far too short a game with a $5.99 price point.  Coupled with the shallow gameplay, The Hand of Panda is a game in which I have a difficult time recommending.  In the game’s defense, the entirety of The Hand of Panda was created by three people on a $3000 kickstarted budget.  An entire game based on the bonus round concept is a tough sell if there is not enough game play behind it; though it is equally possible that a mechanic that is usually meant to fill only a few moments of the players’ time could simply not be enough to stand up on its own.

Interesting premise, but simply not enough gameplay to justify the $5.99 Price Point.