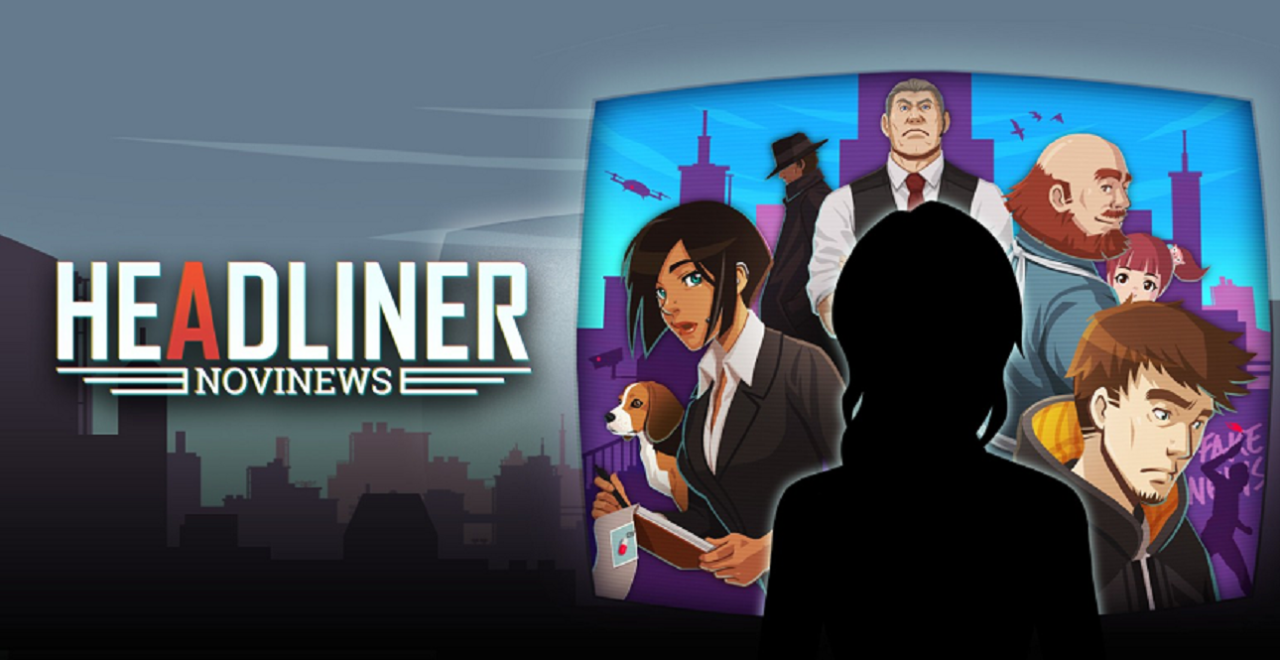 As a visual novel, Headliner: NoviNews hits pretty close to home. You play as a national news editor, whose task it is to approve or reject numerous articles dealing with familiar topics such as healthcare, relations with bordering countries, and police tactics. Novistan is a fictional city, but its problems are not, sadly.

As Headliner, you’ll often face dueling articles for the same news piece, with several writers hoping for your approval. Which slant do you ultimately decide to publish? I’ll give an example. Very early in the game, there is a series of suicides. Were they a result of “genetic medication”, “foreign embryo modifications”, or “synthetic alcohol”? Each accusatory article written by your staff is compelling insofar as there is some truth to all of them. Report on genetic medication, and the Prime Minister might call you “fake news” for not blaming your neighboring country. It might also be more difficult for your loved ones to acquire needed medicine at less cost. Blame the foreigners, and you might stir up riots among the populace, which can quite quickly escalate. Point fingers at synthetic alcohol and a pay cut could be in store, as they are big advertisers. Plus, even more potential consequences, both broad and narrow, down the road. A lot of the choices feel less sincere, with corruption coming from many directions.

It’s not a matter of simply ignoring articles you don’t agree with either, as there’s often a quota you must hit. Even on days when there isn’t, your bosses words that “even silence is a stance in and of itself” hang overhead. Your boss is also keen to drive home the point of being the first to break the news and having a consistent angle. It adds another layer of pressure to Headliner: NoviNews. 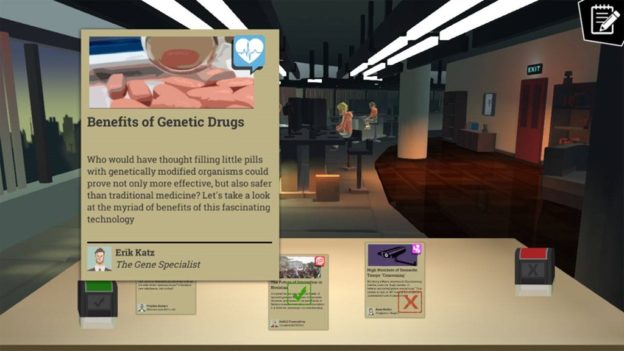 This illustrates, to a degree, how your reporting can influence the nation. You’ll see this more during your nightly trek from the office to your apartment. Graffiti lined buildings that echo your publish points, increased lines at the hospital, cops well beyond the police station, protestors marching the street, even the billboard outside your apartment, these are but some things to keep an eye out for. There are also word bubbles that appear as citizens have short conversations. Stop when you see these, otherwise, they’re easy to miss. Conversations with main characters (like your brother, the local shop owner, etc.) are more involved.

Headliner: NoviNews has mature themes. Some I’ve touched on, some I don’t dare for fear of spoilers. It also has a significant amount of strong language – honestly, more than I’ve ever seen in a Teen-rated game. It adds nothing except to make the otherwise good writing seem weaker. As a result, I’m declaring the Teen icon a “fake rating”! 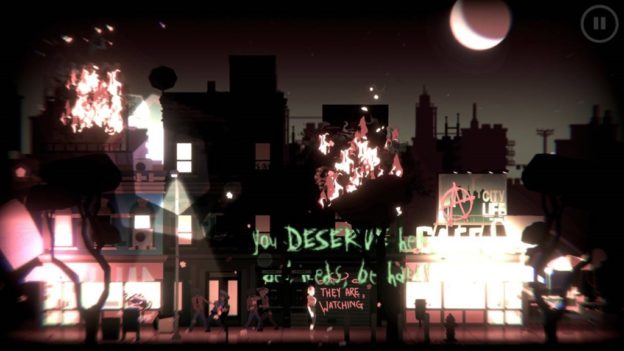 Another mature aspect of this game concerns one of the main characters, Evie, an immigrant co-worker whom you can build a romantic relationship with. When my wife was playing with her female avatar, she was quite surprised to learn that Evie was her only romantic option. I get it’s easier to have just one character model and not have to adjust the dialogue a bit, but it’s head-scratching to see the developers take such a narrow approach here, especially when they put forth an effort to include optional non-binary pronouns. It feels more like a cheap attempt at inclusiveness as a result. 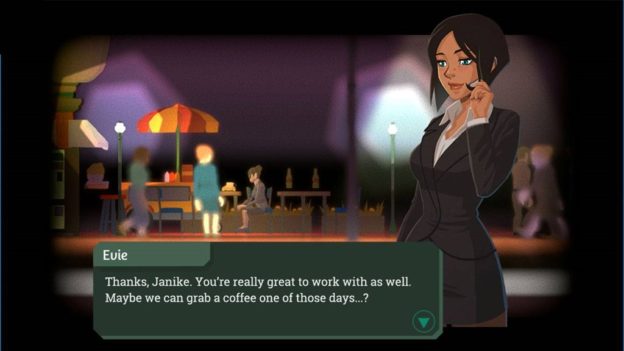 A pretty good aesthetic package is on offer in “Headliner: NoviNews.” While the character models are too simple, the close-ups during conversations show off strong art, as do the detailed backdrops. I also enjoy the musical tracks. They fit well, and you can even by a jukebox for your apartment to cycle through them. 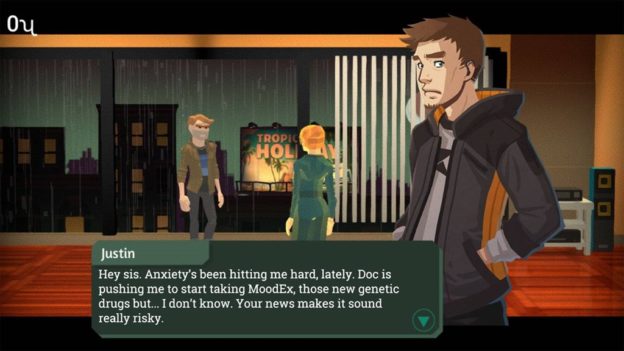 Speaking of your apartment, I want to share several ways I think this could improve. One concerns the dog you can acquire early in the game, who is always waiting for you when you get home. What should be a fun distraction amounts to simple busywork: buying dog food and treats, and petting them in a minimally animated fashion. If chatting with your pooch was expanded, this could be a nice way to recap how you’re feeling at the current stage in the game, but this part is so quick it has little impact. You can also buy the means to change the color of your apartment walls. This is very glitchy; the first few times I tried, it didn’t work and froze the game! The game description states that apartment “slowly fills with piles of cash,” and while I did see this happening in real-time, my character was often too broke to lend his brother a few bucks or shop at the store on the way home from work. Is it just a visual glitch? Lastly, sometimes the game simply crashes as you go to bed! This game also seemed to run better in handheld mode. 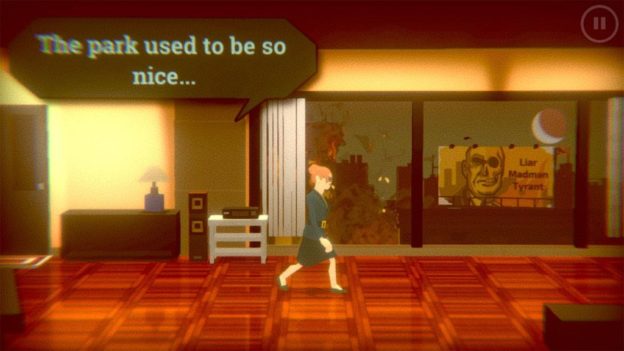 Headliner: NoviNews isn’t very long — your two in-game weeks take about an hour — but you’ll want to replay it at least once to unlock a new character. On replay, you’ll find some fresh articles, but I wish there was a choice for more “moderate” ones to improve the balance. The game does get repetitive, but after four replays I’m still discovering new things. I think some sort of percentage indicator or something that records all your endings would encourage 100% completion.

I found Headliner: NoviNews entertaining enough to play through multiple times. Yet I still have several concerns with it. Even if the length and repetitiveness isn’t a bother, the lack of choices in a key subplot (and lack of moderate choices in general) plus numerous glitches certainly are. I can’t recommend it at its $13.99 launch price, stimulating though it is. However, the very good foundation here means I’ll be watching for Unbound Creations’ next Nintendo Switch title with anticipation. 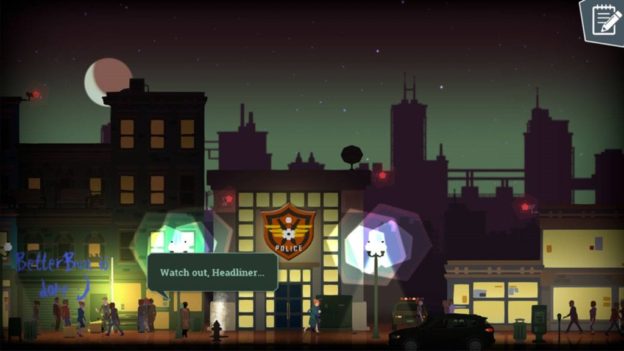 I found Headliner: NoviNews entertaining enough to play through multiple times. Yet I still have several concerns with it. Even if the length and repetitiveness isn’t a bother, the lack of choices in a key subplot (and lack of moderate choices in general) plus numerous glitches certainly are. I can’t recommend it at its $13.99 launch price, stimulating though it is. However, the very good foundation here means I’ll be watching for Unbound Creations’ next Nintendo Switch title with anticipation.