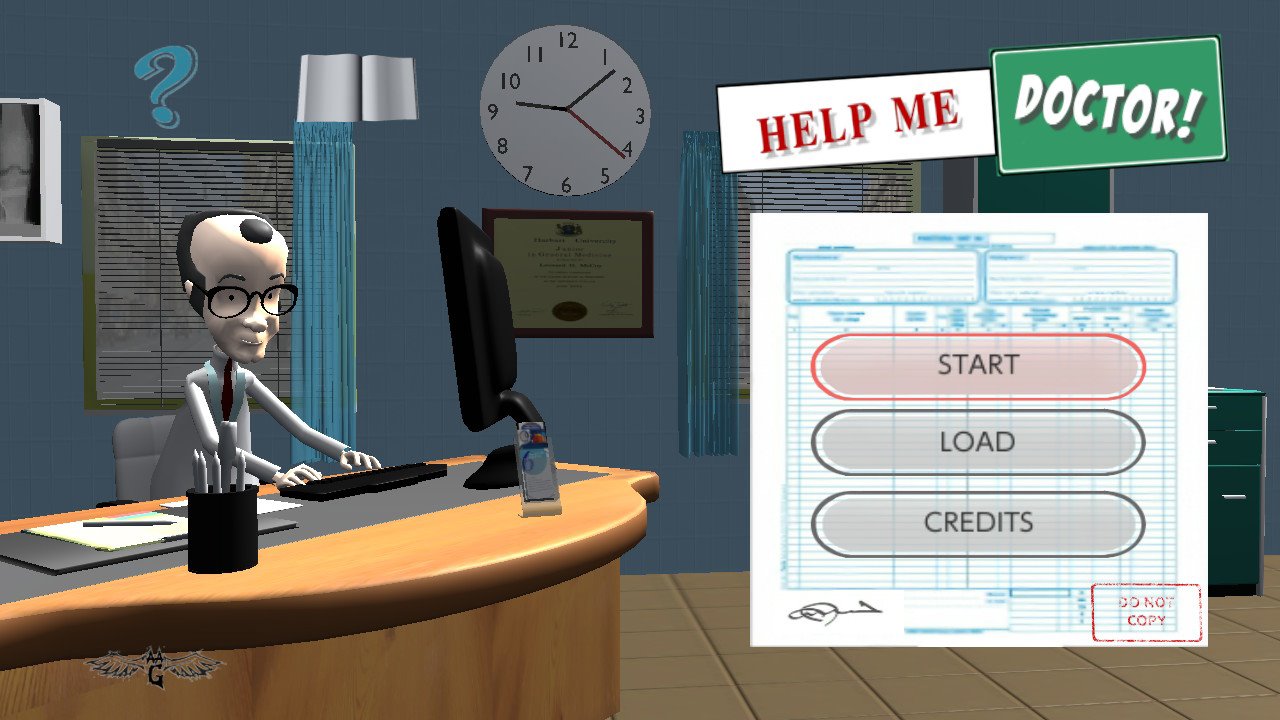 Help Me Doctor is categorized as a simulation, strategy, and study game from IceTorch Interactive and Angry Angel Games. This game offers the ultimate bare-bones of gameplay where there is little strategy involved with mindless button-pushing. 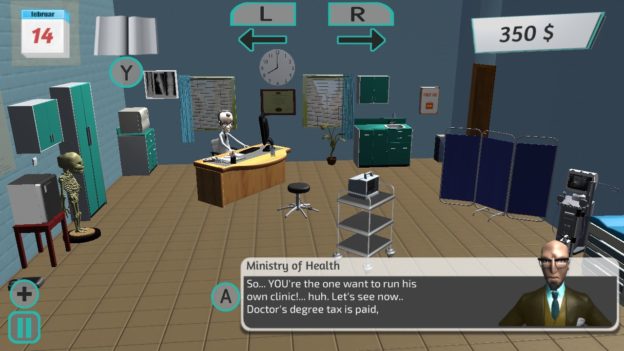 The main menu is nothing special. You have the option to start a new game, load a currently saved game, or look at the credits.

Also on the main menu, which I didn’t notice until after I finished the game, was a question mark and a book. The book is the list of medical diseases you can look through (there are only seven), and the question mark is the tutorial. It’s not prominent, so I had to figure out the game myself thinking there was no tutorial for my entire playthrough. Luckily, the game is super easy to figure out. 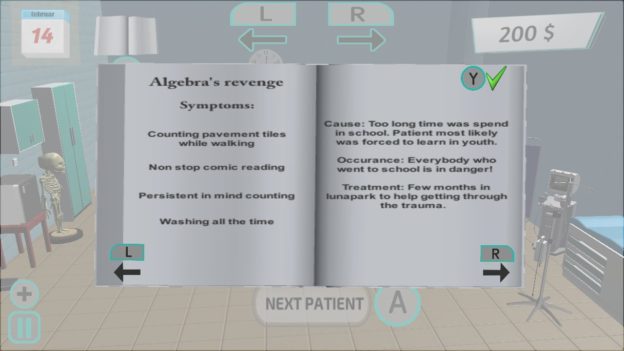 When you start the game, the Ministry of Health – who, according to the game, is one man and he’s extremely grumpy – decides to give your health clinic a chance. The Ministry’s dialogue was riddled with typos. Within his first speech bubble, I knew this game was going to be a trip. After he speaks, patients begin to come in.

You don’t move any characters, but pressing L and R allows you to shift between your office and the waiting room. There’s no reason for this since patients keep coming until the in-game clock hits 6:00 pm. Also, when you dismiss one patient, the A-button appears at the bottom of the screen letting you know the next patient is ready to be seen. 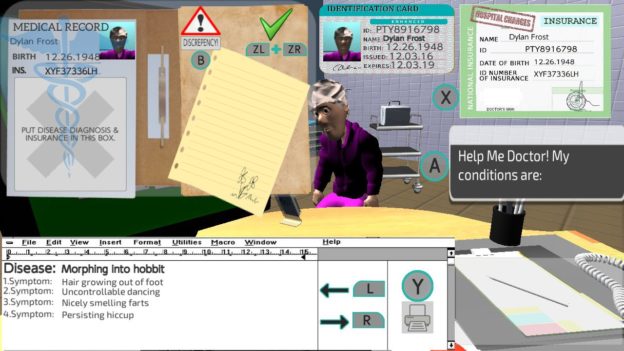 Your workday is from 8:00 am to 6:00 pm in-game. The minute hand constantly moves so you can get through several days within a half-hour in real-time. I believe it took me less than an hour in real-time to get through the whole game of mindless gameplay.

When patients come in, you then check their three symptoms and match what disease they have. In the beginning, you have seven diseases to choose from with four symptoms each. The longer you play the game, the more diseases will be added and those diseases may have five or six symptoms listed. Even though more diseases get added, the medical book, which explains each disease, never updates. The medical book isn’t needed to play the game; I think it was something extra for fun (for example, one disease is “morphing into hobbit,” and the medical book claims it’s caused by “reading too much Tolkien”), but the developers didn’t keep up with it. 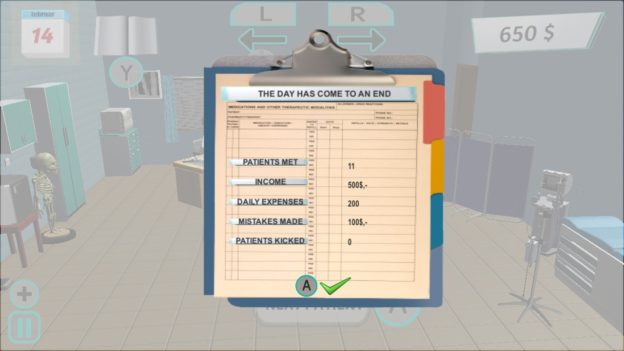 This doesn’t make the game harder. The patients don’t show one symptom for one disease and two symptoms for another. You just need to match up all their symptoms with a disease; there’s little to no thinking involved. Finally, once you’ve diagnosed them, you need to make sure their insurance ID number, their name, birth date, and medical card number all match your records, the insurance records, and their ID card.

If everything matches, great. You earn $50 and move onto the next patient. If something doesn’t match then you dismiss the patient earning no money, but you don’t have to pay a penalty fee. If you diagnose a patient with something not matching or you misdiagnose them, you have to pay a penalty fee. If your clinic gets to zero dollars, you go out of business and the game ends. 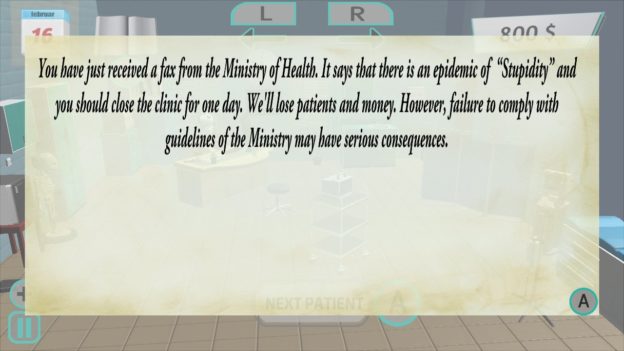 Action cards will appear once a day where you need to make a decision such as sending a patient elsewhere or letting a patient cut past everyone else in line. Depending on what you choose, you can earn a lot of money, pay a penalty fee, or lose a few clients. Regardless of what you choose, the consequences don’t matter. The game is so easy that I had a lot of money, so I didn’t care if I lost money or patients.

Help Me Doctor glitched on me twice. Once was when I tried to diagnose a patient but the A-button wouldn’t work for me to see their symptoms. I dismissed them since there was nothing else I could do and had a penalty fee for dismissing a patient with the correct insurance information. 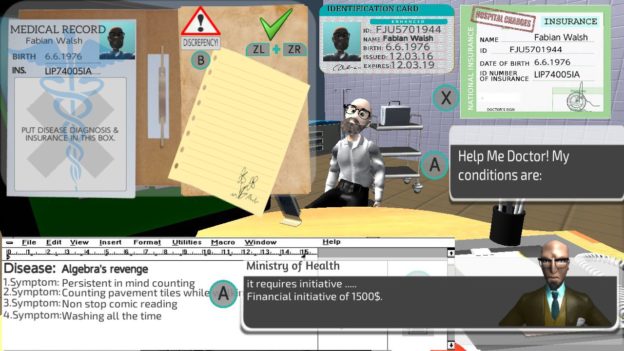 The second glitch may have cost me the game. The in-game day didn’t end at 6:00 pm as it was supposed to and kept going. When the clock hit 8:00, the game must have thought it was a new day. So the Ministry of Health began to talk while I was diagnosing a patient. The game became confused since the A-button was used for both looking at symptoms and continuing the ministry’s dialogue.

The ministry told me I could keep my clinic open if I paid him $1,500. Only one option appeared which was, “do not give in to the bribe.” I hit the A-button which made the ministry angry and close my clinic. I went out of business and lost the game. 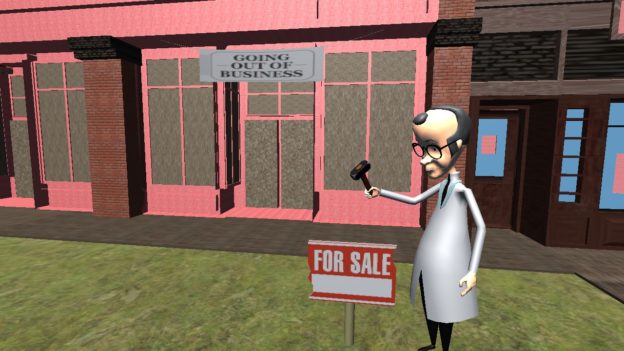 I don’t know if you’re destined to lose the game or if the glitch was so bad that my other options didn’t appear. Even though the game was quick to get through, I’m not playing it again to find out.

The gameplay was so boring and repetitive. There’s no strategy or skill involved. It’s a matching game, more or less.

The graphics weren’t exactly easy on the eyes, and the screen became cluttered when diagnosing patients. The music, on the other hand, was pretty good. It was catchy and energetic. I enjoyed listening to it, but it didn’t match the gameplay well. Plus, it was one song on a loop. It got old quick.

Overall, Help Me Doctor needs a lot of work. Between the glitches, typos, and lack of fun gameplay, I’m not sure how this game made it onto the Nintendo Switch. I think it could have been an enjoyable simulation game if there was more meat on its bones. Unfortunately, I’m not sure what they could do to make this an actual game.

Help Me Doctor is a simulation game that’s made with broken dialogue, sprinkled with glitches, and only a pinch of gameplay. Save the $8 and find a different medical simulator.