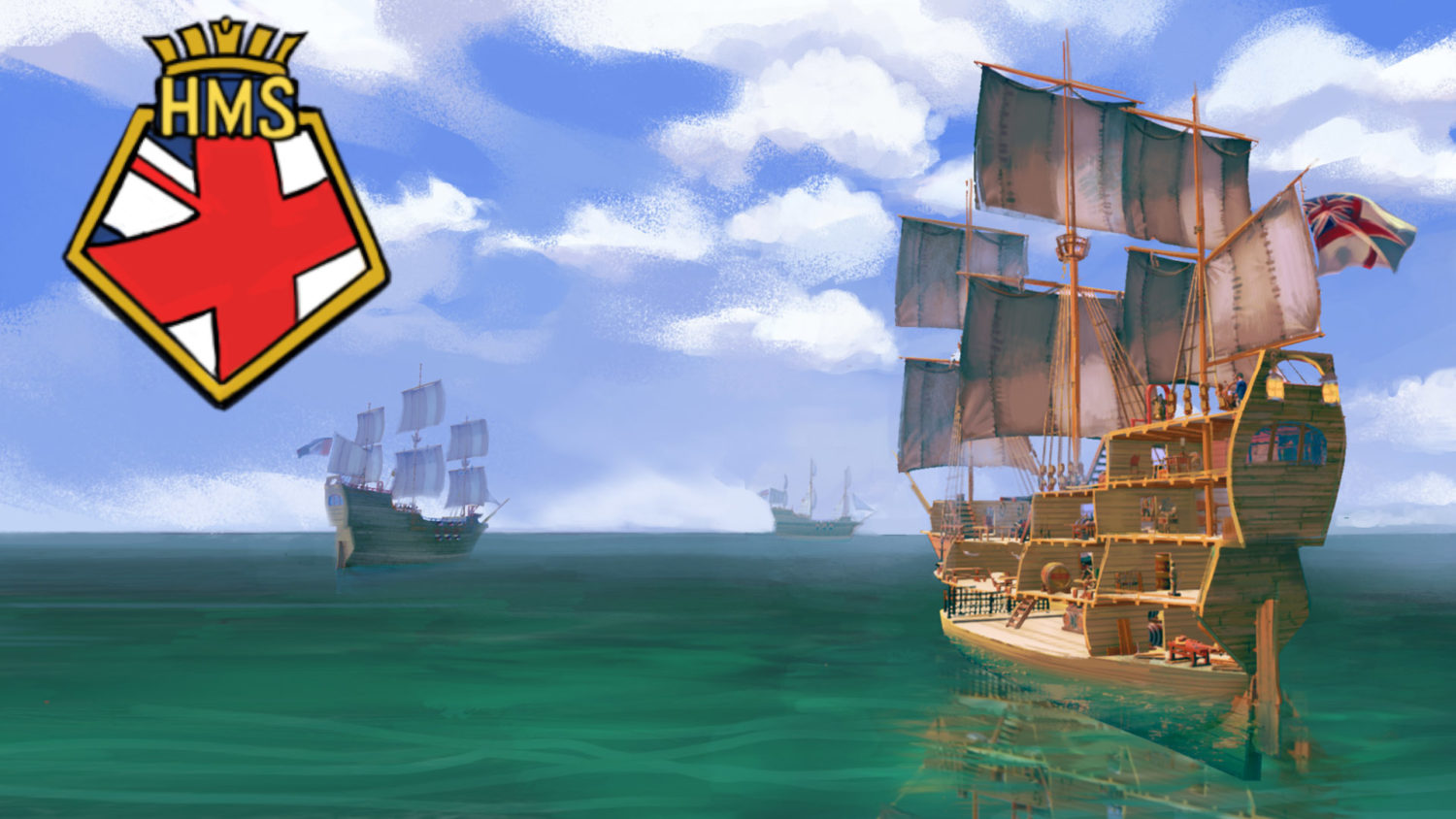 A tot of rum for every sailor?

Welcome aboard, Captain. What are your orders?

Doling out the rum may be the way to go, and add a dram for yourself. You’re going to need it. In this game, you are now the captain of a ship in the service of her majesty. Things get a bit fuzzy here, because the period the game portrays looks like the mid to late 1700s in the days of tall ships, rum rations, and floggings. There were also battles with the Spanish navy and a cautious relationship with the Dutch (a bit like in Pirates of the Caribbean and the East India Co.,). Unfortunately, there was no queen on the throne in England at that time, so accuracy is evidently not important.

Now that we have taken care of the very English propensity for history lessons, let’s really get into the game. When I got the assignment and heard the description of the game, I was very hopeful. Those hopes were dashed against the rocks of an unfriendly shore of design in the middle of a squall of bad user interface. 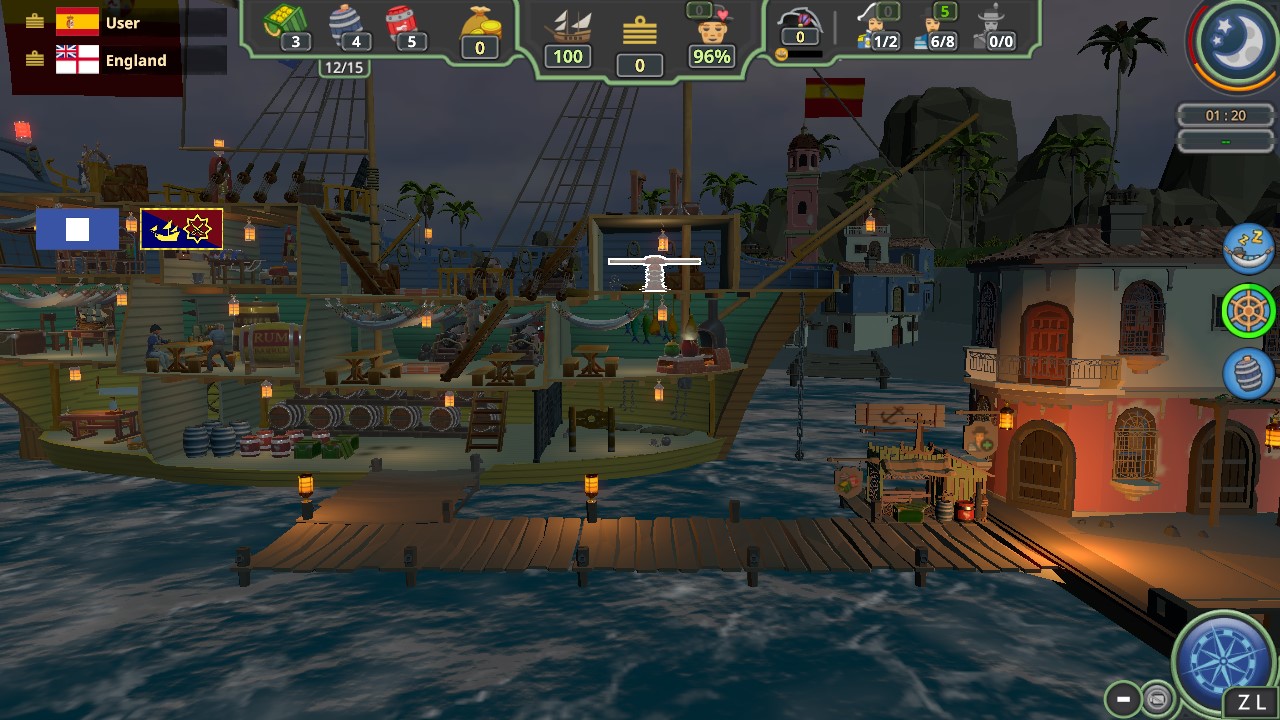 The basic premise of the game should make for a decent gaming experience. You are the captain of a Ship of the Line, and your aspiration is to become an Admiral. To achieve this goal, you need to take a so-so ship and make it an efficient, effective tool for the crown. How, exactly, do you become a tool? Aside from the obvious methods, you need to follow the orders of the crown, make sure you keep England’s enemies in their place, and prevent war with the Dutch to keep the vey profitable trade agreements in place. You will need to travel to several ports to expand the influence of the crown. In each port, you can stock up supplies and recruit new sailors for your ship. You can even make shore on an unclaimed island and stock up on bananas (if there are palm trees there). Along the way is a plethora of stations you can use to take care of everything from feeding the crew to making repairs to the ship to furling sails and a dozen other tasks.

Here is where things take a turn for the worse. The game reveals itself to be only a resource manager and task scheduler. Indeed, the level of attention required becomes a rather tedious exercise in micromanagement. I went through the tutorial to get the introduction to the controls, but this is also lacking. It acquaints the player with most of the ship functions and how to use them (scroll to highlight the function you want, then press the A button) and the statistics bar at the top of the screen. There are slots for vessel fitness/damage, available resources, and crew morale. In this game, crew morale is critical; if the morale gets to zero, the crew will mutiny and you are done for. There are several ways to keep the morale up: sleep at night as much as possible, keep the crew well fed, and provide extra rum (see, I told you it would come in handy). 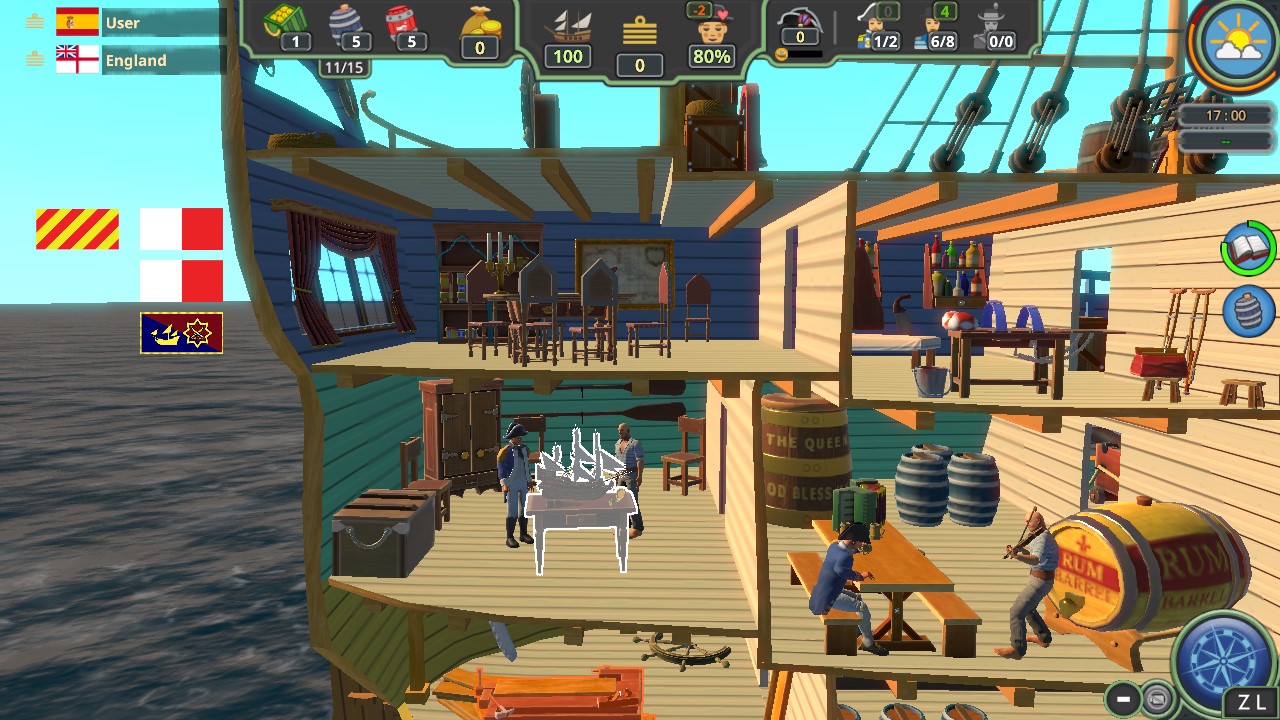 These tasks are a bit cumbersome. The game will fly flags down the wire for you. Each flag has a unique set of colors and patterns, and each flag has a different meaning. You have from the moment the flag appears at the top of the wire until it gets to the bottom of the wire to get your task done. You may have a few days to complete the task in game time, but in real time you only have a couple of minutes. If a crewman fails to complete a task quickly enough, you can have them chained and flogged as punishment. This may be a bit gruesome, but it was standard practice in the 1700s (along with a few other, even more barbaric, practices). The real problem is trying to remember what each flag means. The text description of your task is hidden, and the time it takes to scroll through controls to find the one thing you need may cause too much game time to pass to actually get the task done. This just becomes frustrating, leading to, “Time to start over…again.”

Not only is the game interface overly complex, but the controls were not expertly ported to a game controller setup. A keyboard/mouse setup would be a faster and better arrangement for the number of controls needed for this game. You do get a radial menu with the ZR button, but there are not many options to do things here. To switch between ship view (where you see your ship in a side cutaway view) and world view, use the ZL button. In ship view, you manage all the tasks. In world view, you set your next destination and get a look at where other ships and ports are so you can plan where to go and where to avoid. 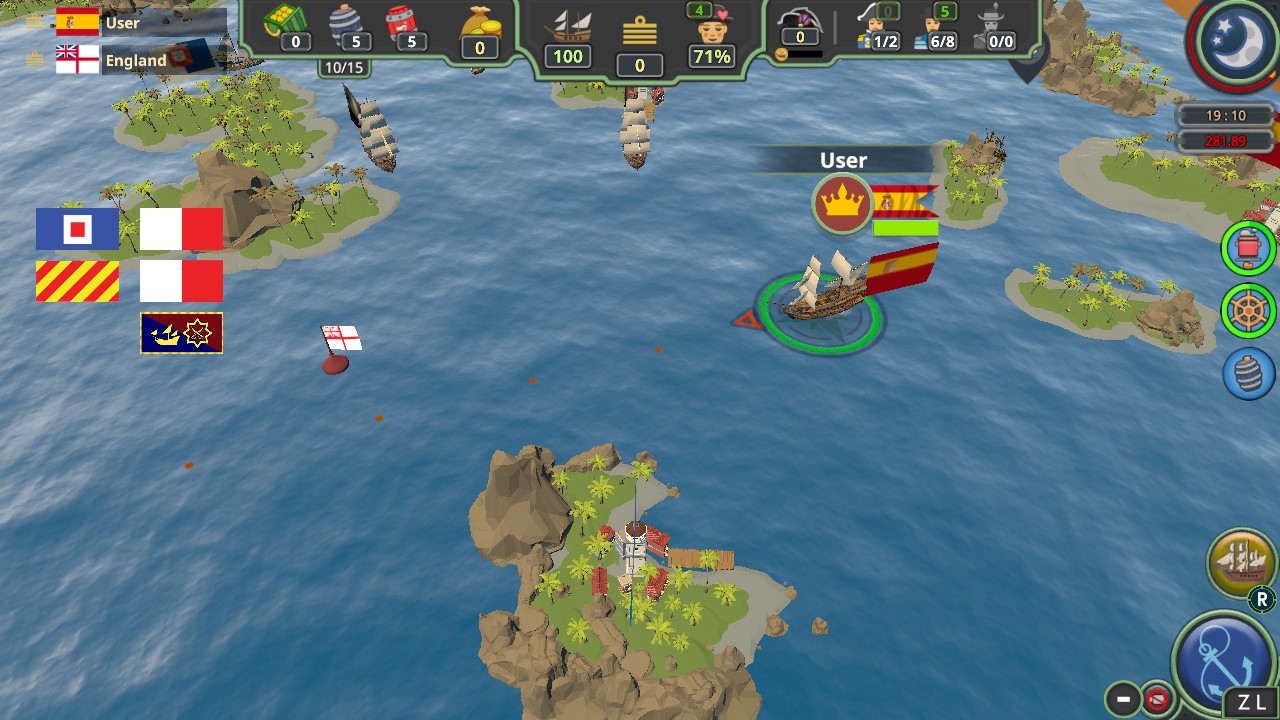 What started as a hopeful voyage of discovery, adventure, and life at sea turned into a shipwreck of micromanagement and frustration.

If you really want to try your hand at captaining a Ship of the Line, go ahead and give Her Majesty’s Ship a try. But because of the game’s focus on frustrating micromanagement, you may want to keep a weather-eye on the horizon for something better.