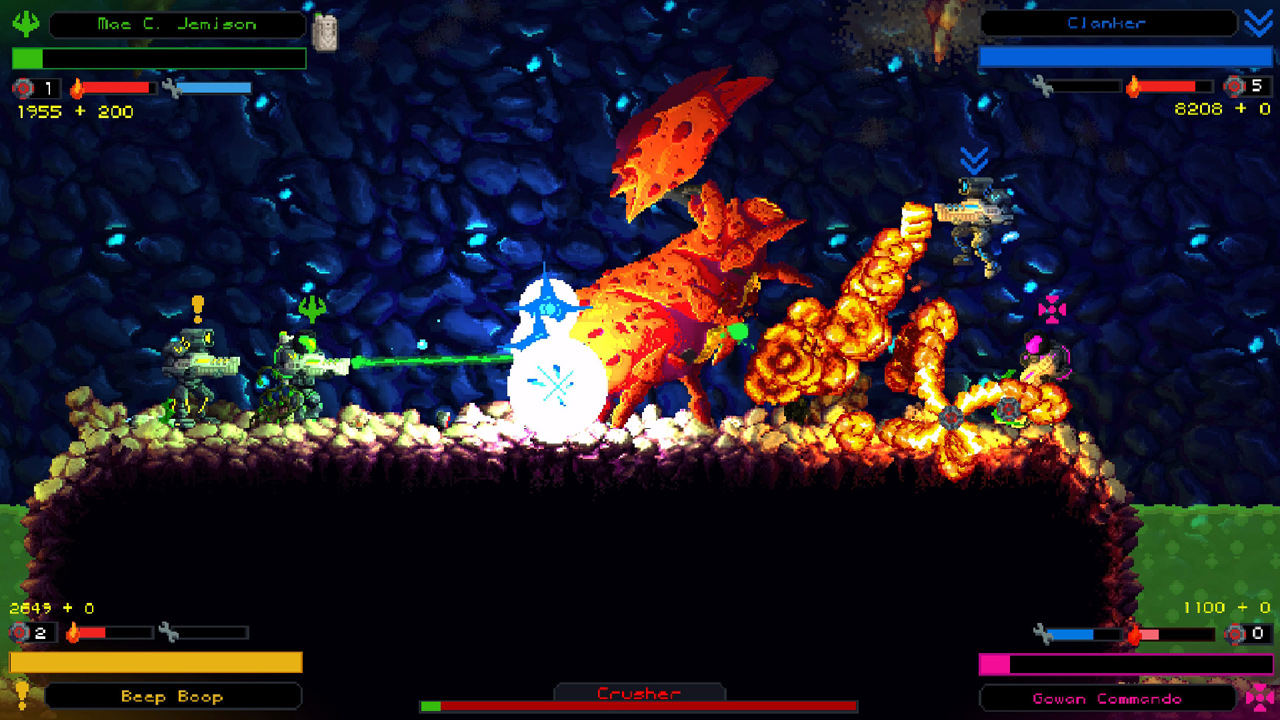 A little Contra, a little RPG, a lot of aggravation, and you have Hive Jump!

Hive Jump is a great idea for a game, with good production. However, the fun factor is diminished by the difficulty and constant glitches! I’ve played Hive Jump for roughly 27 hours and have yet to complete a single hive in its entirety. I know what you’re thinking, it can’t be that bad, but it is. 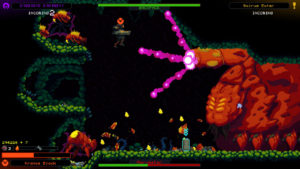 Enemies, even on easy, constantly come at you. Which is par for the course, but the quirky controls use both sticks to move, and the trigger buttons to shoot, jump and launch grenades. Controlling your soldier gets silly when trying to run, jump, and shoot at the ever-moving baddies. Another gripe is the ridiculous hit effect enemies have when you come into contact with them – they can, and for the most part do, literally knock you across the screen which is just frustrating. You have a life bar which is useless as most enemies, even on easy, can kill you in 2-3 hits. Or my favorite is they can trap you in a corner and juggle you to death with no escape! 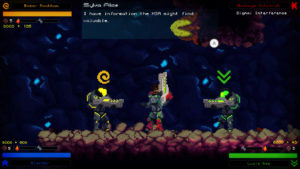 Now the game isn’t horrible, even with the constant crashes. I’ve lost more boss battles due to crashes in the middle of combat then I can count! It does have some really cool features that lend to the RPG feel, like cut-scenes, and a cool weapon system that lets you unlock and upgrade weapons which are purchased from the goo monetary system. 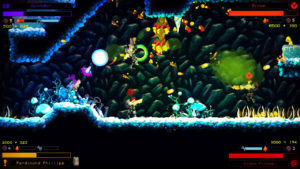 Another great feature is the ability to upgrade in between levels so you don’t feel so underpowered on difficult levels. The fun factor kicks in along with massive irritation when you play two-player co-op mode. Like Contra, both players are on the same screen and can and will kill each other with grenades being tossed about by the enemy. The real challenge is one player carries the explosive ordnance you have to deliver to the end. The reason is if you get knocked off the screen you have a timer for either player to get back into eyesight of the other or, you guessed it, instant death to the player who can’t be seen! Pray he’s not carrying the backpack. 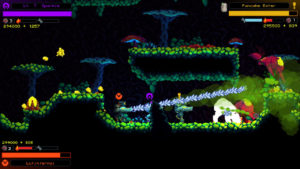 The visuals in the game are very cool. You can unlock and customize your soldier by using skins and visor colors. The weapon effects are also neatly done as each weapon has its own effects and colors. In two-player mode, you can choose an icon that hovers above the soldier so you can try to keep track of who’s who during the craziness. 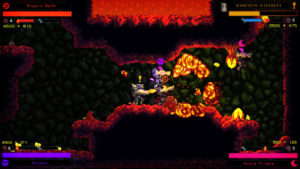 While I actually like Hive Jump and its ideas, as a beta tester of multiple different homebrew games this still has the feel of an incomplete beta. The times of choppiness during gameplay and the instability issues really make this game a drag due to the time it takes to go through each hive. I seriously think however with a little more time and polish, this game could be epically fun and have huge success in its genre.  Keep up the effort Graphite Lab, it’s almost there.

While I actually like Hive Jump and its ideas, as a beta tester of multiple different homebrew games this still has the feel of an incomplete beta.