Hollow Knight, I think best summed up as ‘the game where things happen’, is an excellently crafted metroidvania that loves to keep surprising, and because of that its exploration is among the most enticing in the genre. As you dive deeper into uncharted territory, it’s impossible to predict what next the game’s enchanting world will throw at you. But even while backtracking through familiar paths, you never know how your actions elsewhere in the world might change what you find. 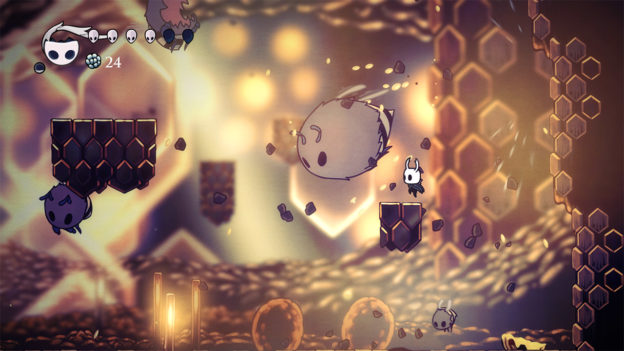 It should say that I, a hater of both jump-scares and every kind of bug, love to explore Hollow Knight’s unpredictable, bug-ridden world. The game’s beautiful 2D art brings stunning environments and adorable insectoid characters to life and does so in a way that strikes a perfect balance between loneliness, eeriness, wonder, and cuteness all at the same time. Discovering new biomes is exciting. Environments are not just nice to look at but are interactive as well. Vegetation, fences, rocks and other background objects will often react to your attacks. Breaking and animating dynamically when struck, they add visual flair as you fight each area’s unique enemies. 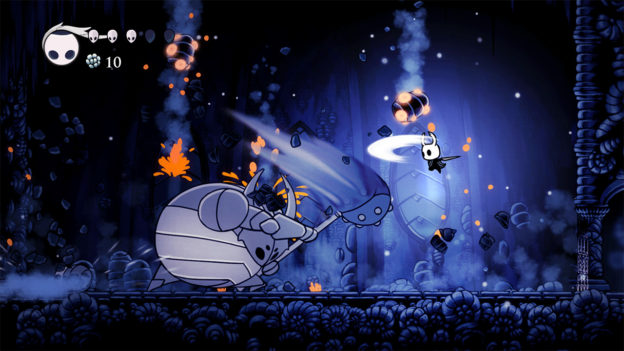 New regions also bring new mechanics, powerups, events, characters, and sounds. The audio experience owes its success equally to the soundtrack and sound effects. The music is varied to match the atmosphere in each region and there are multiple epic boss battle tracks to enjoy. Sound effects effectively reinforce the visual experience, maintaining a strong connection between you and every action that takes place in the world, and this especially shines when you encounter NPCs. Conversations are displayed through text, but each character you meet makes their voice known through brief utterances of gibberish that do a superb job of fleshing out the character’s personality. 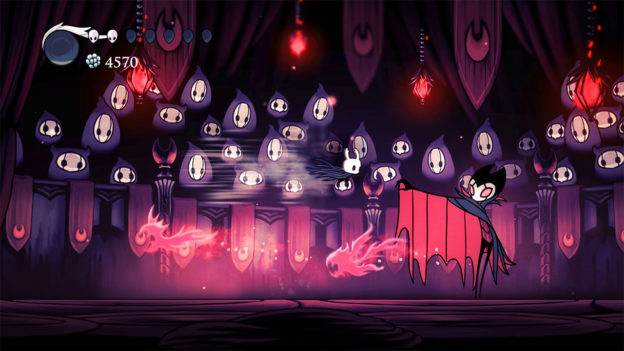 Adding further to the immersion is a great implementation of HD rumble. Rumble can be rough and prolonged, using a large area in the controller to represent a charging boss, shaking the ground while running, whereas a subtle tap can be felt whenever you land on the ground from a jump. Hollow Knight’s different rumbles feel distinct from one another, each tailored to the situation, subconsciously connecting the player closer to the game world. 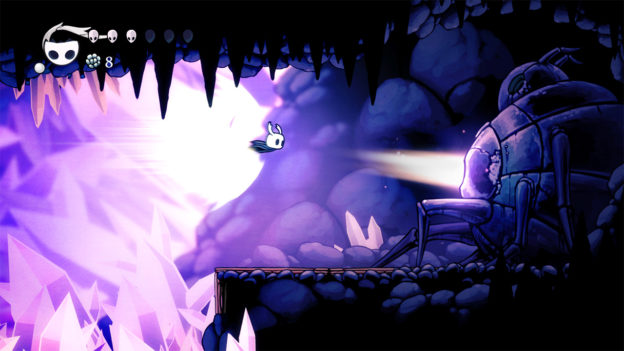 The gameplay itself is nearly as well-crafted as the world. With tens of hours of content, you’ll be platforming and fighting a lot in the game and fortunately, both aspects are solid, though not perfect. Platforming starts simple, allowing you to simply walk, jump and dash left or right, then adds more manoeuvrability options over time. As you gain new abilities, that I won’t spoil here, the challenge increases while usually remaining fair. However, there is one recurring exception, the inability to see what is ahead when falling. If you miss a jump or simply jump downwards intentionally, it’s difficult to know what you’re falling to because the camera doesn’t shift enough to let you see, unfairly leading you to fall directly into hazards. You can use the analogue stick to shift the camera but only while standing still, meaning you have to stop, look a short way below, memorise the nearest platform to fall to, jump, then stop and do the same until you’ve slowly made your way down a potentially deep drop. The slow-down in pace feels odd considering the high tempo of the rest of the game. The issue is fixable by simply having the camera shift automatically while in free fall. 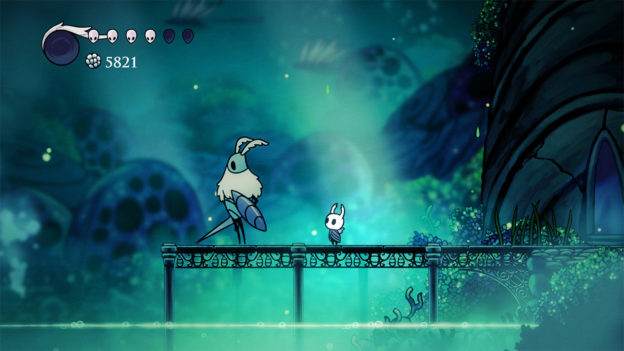 Brief and infrequent platforming frustrations are not as bad as what the combat system can produce. The combat is well designed (excluding occasional attack hitboxes that don’t match the visuals), and battles with enemies, including any of the countless bosses, are fair, but difficult. The challenge comes from the need for precise timing. Yours and your opponents’ attacks are both very fast and once an attack has started, it’s usually already too late to dodge. The aim is to learn the enemy’s attack patterns and anticipate when to dodge, and any brief chances you have to quickly get close, attack and dash out. It’s fun and satisfying, but very difficult and as such the game provides options to strengthen your weaknesses. A wide variety of charms can be found throughout the world that enhance certain traits like health, attack, speed etc. Equipping the right ones to suit your play style is key to overcoming the game’s toughest challenges.

Hollow Knight is an outstanding game about exploration that’s a joy to play, look at, and listen to. Offering tens of hours of superb gameplay, this release is easily worth the asking price and I encourage anyone who enjoys exploration to buy it, with the only exception being those who are particularly deterred by challenging games.

Hollow Knight is an outstanding game about exploration that’s a joy to play, look at, and listen to. Offering tens of hours of superb gameplay, this release is easily worth the asking price and I encourage anyone who enjoys exploration to buy it, with the only exception being those who are particularly deterred by challenging games.