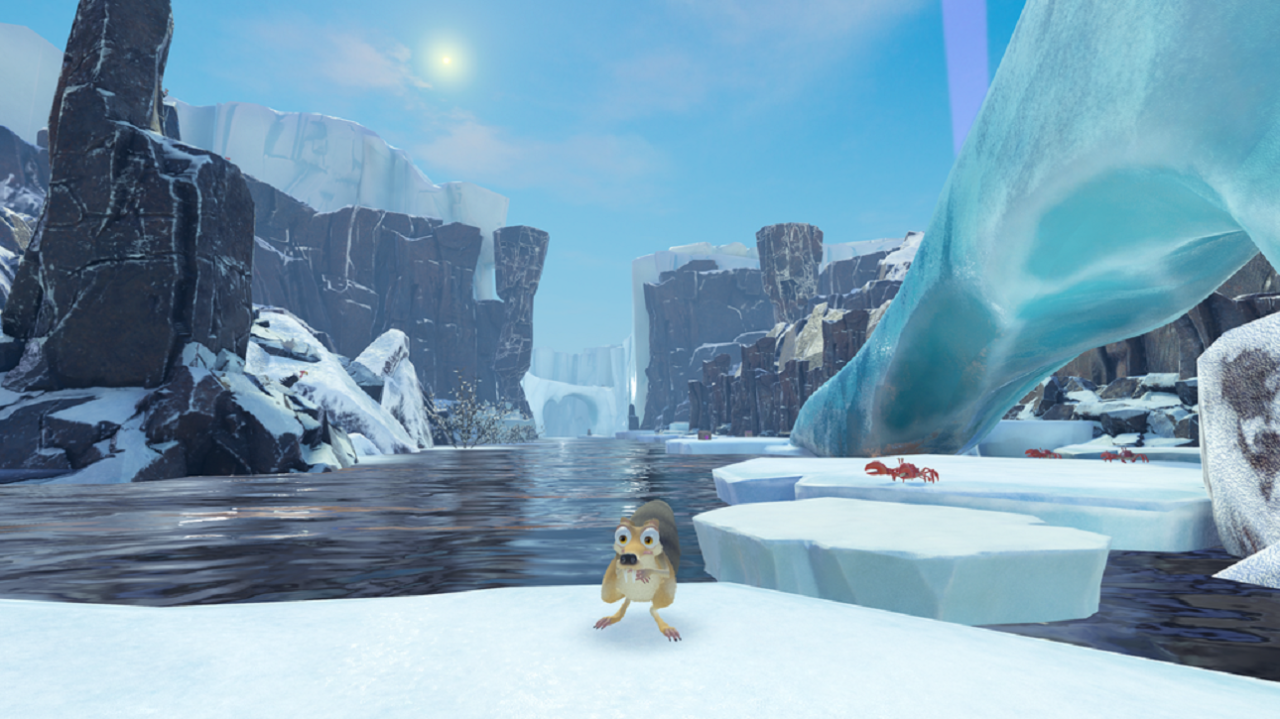 Get ready for some 3D action with Ice Age Scrat’s Nutty Adventure on the Nintendo Switch. One of the best compliments I can pay to this game is that I was able to enjoy it despite not being much of a fan of the Ice Age franchise. I’ve only seen the original film and a few of the shorts featuring Scrat. But I get why the sabre-tooth squirrel is the star here. The way he eats, sleeps, and breathes nuts leads to entertaining situations. In this game, he’s out to find four legendary Crystal Nuts.

There are other things for Scrat to find as well. Purple nut-shaped gems serve as the main collectable, and collecting them unlocks concept art. They’re scattered in such a way to lead you from location to location, but there are extras to find if you’re willing to explore off the beaten path. Finding these secrets, such as hidden statues, were some of my favorite moments in the game, and added a bit of a challenge to a mostly easy experience.

I think kids will find the challenge just fair enough. While not at all a difficult game, there are a few areas where the timing of jumps is tricky. Some of the platforms can be on the small side. Several of the optional collectables (each level has four table pieces) are easily missed. The boss encounters should also prove a bit tough for younger, less experienced players that serve as this game’s main audience.

Regular enemies pose little if any challenge. Scrat’s fighting moves are hardly the most satisfying. While defeating enemies does result in more nuts collected, you can find enough just in your travels. Eventually, I started jumping over most enemies as I found the combat quite dull. That said, late in the game, there are enemies you’ll need to sneak past or suffer one-hit fails.

You’ll mostly be running and jumping. The game improves sizably once the double jump move is obtained, and I almost wish it was available from the outset. The game plays like your normal 3D platformer in many respects, which makes it good for picking up right away and playing. It manages to inject some excitement during the parts where your control of Scrat is limited, falling from the sky, sliding down an icy hill, etc. Times like these are limited, though.

Scrat can move fairly quickly, so I wish the game aimed for 60 fps. But I quickly got used to any stutter hiccups. Especially in the open, outdoor areas, this is a rather nice looking game. The visuals are bright, and the level design is distinct enough to help stave off any feeling of repetition. While not a bad presentation by any means, the camera could definitely be better when in tight quarter situations. There’s the odd muddy texture or instance of pop up too. I also managed to fall through the scenery once. The music makes this adventure seem epic, beyond satisfactory.

Yet that’s what Ice Age Scrat’s Nutty Adventure turns out to be, a satisfactory platformer only. For a game inspired by movies, it’s actually more than satisfactory in truth, but that says more about the quality of movie-inspired games than it does this title. The adventure goes by quicker than expected. I beat it in just over five hours, playing at a casual pace, before I saw the abrupt endings. Replaying areas after new moves are obtained allows you to grab items you couldn’t get initially, but the main game is quite short for a single player, $39.99 retail release.

Still, I can’t deny that it held my attention, at least through one playthrough. Maybe it caught me at the right forgiving moment (after reviewing several mediocre RPGS) but I appreciated a game where I could turn my brain off. Ice Age Scrat’s Nutty Adventure is entertaining, albeit basic and simple.

Ice Age Scrat’s Nutty Adventure has definite room for improvement and polish, but I still suspect it’ll find an audience. It has just enough challenge for kids, while older players might not mind an easier adventure if they’re franchise fans or just looking for a competent 3D platformer. Definitely wait for a sale though, as the amount and quality of the content here doesn’t match its launch price.

Ice Age Scrat’s Nutty Adventure has definite room for improvement and polish, but I still suspect it’ll find an audience. It has just enough challenge for kids, while older players might not mind an easier adventure if they’re franchise fans or just looking for a competent 3D platformer. Definitely wait for a sale though, as the amount and quality of the content here doesn’t match its launch price.