A stereotypical southern American redneck isn’t the first kind of character you might typically pair with the magic and mythology of Ancient Egypt. But that’s what gives Immortal Redneck its charm.

The game embraces you immediately with its sense of humour. It opens with a cutscene showing your first absurd death, crashing a truck in the desert, overshadowed by indifferent pyramids. The narration is colloquial and fun and establishes the general attitude of the game in seconds.

The upbeat approach towards your character’s own death is echoed by the bright colours and cartoonish design. This isn’t the kind of game that is going to have a hugely profound story or be especially thought-provoking, but it’s plenty of fun. 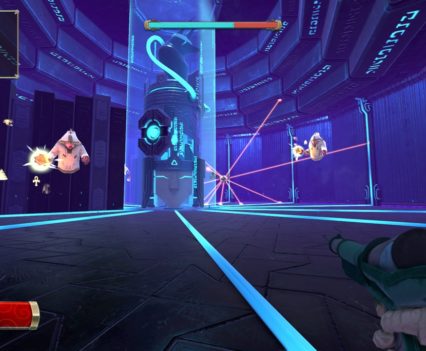 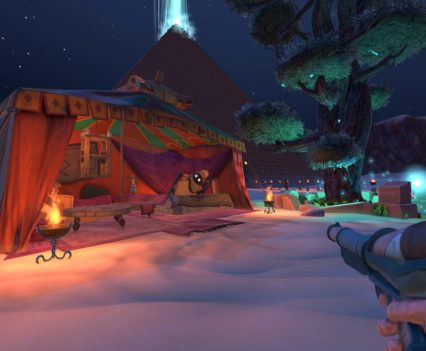 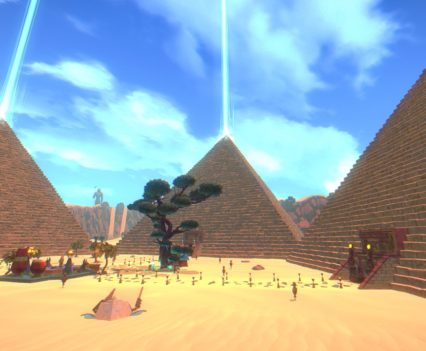 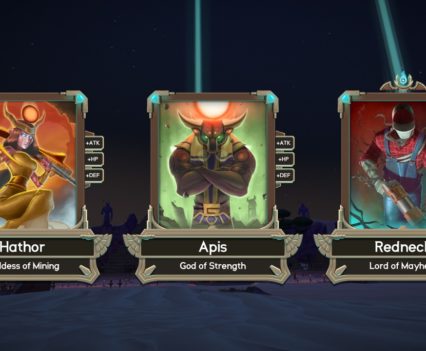 You play as the redneck, mummified and resurrected. You break out of your tomb, load your pistol and shoot up a handful of pyramids. You explore a rich map that takes you up three floors of each pyramid to reach the boss. You get attacked by magical creatures inspired, sometimes somewhat loosely, by Egyptian mythology – jackal-headed archers shoot flaming arrows at you, little mummies burst out of tombs charging towards you, the most difficult foes you face are clearly disturbed spirits. Every enemy rises from the sand itself, and crumbles away once you’ve killed it.

You won’t reach the apex on your first try.

But you’re not supposed to.

Each enemy you kill has a chance to drop ammo, restorative meat and gold. The ammo and the meat you can use on that run, but the gold is useless until after you die.

When you are defeated, you take your gold with you into the afterlife. When you reawaken, you can use the gold to buy boosted stats and the favour of gods. Once you have the blessing of a new god, you can then play as them, with their unique stats, abilities and weapons.

This a pretty clever way of incorporating the mythology of ancient pharaohs who believed that their possessions could benefit them in the afterlife into the game. It’s an interesting touch that shows how the game designers got creative with the core concepts.

The sense of humour introduced at the beginning of the game is maintained throughout. From casually cursing when you get injured to hollering puns when you’re winning, the redneck is definitely an entertaining character to play as. Unlike a lot of first person protagonists, the redneck has a distinctive character of his own, rather than being a blank slate type model. His attitude is infectious, and it makes the game addictive.

The map changes with each run and is distinct enough that it doesn’t get old quickly. It has that flaw that is integral to all roguelikes, in that it will get repetitive.

But between the new rooms, enemies, weapons and characters that are gradually introduced, there is a lot to keep you coming back. While a single run could make for a comfortable brief gaming session, the drive to try out the next thing you’ve unlocked could keep you resurrecting yourself for a weekend – or more – at a time.