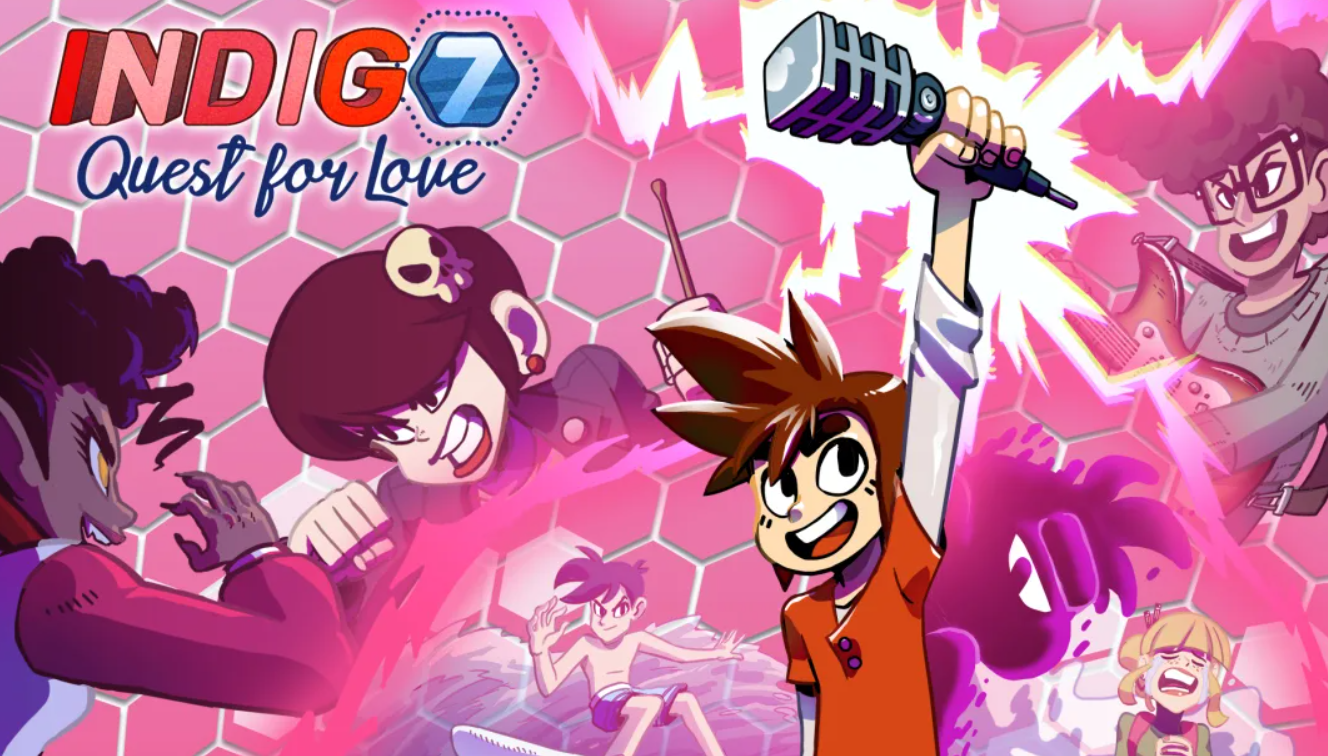 Indigo 7 Quest for Love is a puzzle game for the Nintendo Switch. It takes a fresh approach to color-matching puzzles and wraps it within a comic-style story. It certainly sounds appealing on the surface, but does it deliver on this promise? Yes… and no.

Let me explain. There are two parts to this game that intrigued me from the beginning. Firstly, the unique take on puzzles, which plays a little like a simplified version of Puyo Puyo without the moving parts. I’ll explain this in a moment. The second part is the comic-style story, which looks like it’s been lifted straight out of the pages of an actual comic book.

Let’s talk about the puzzles first. You’re presented with a column filled with hexagon-shaped objects of varying colors. These don’t move or fall, and you can’t element them or swap their positions, making it a little different to the likes of Tetris or Candy Crush, for example. The goal is to take over all the hexagons, changing the color along the way so they all end up the same shade. You can only alter the color of neighboring hexagons, so it takes a few turns to conquer them all. This is where it gets tricky; some levels will limit your time or number of moves, others will pit you against an opponent to see who can generate the highest score. It’s a neat concept that generally works well. 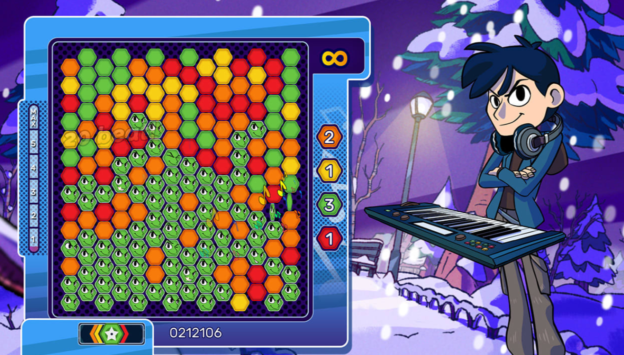 There are three modes on offer: Adventure, Single Player, and Multiplayer. Single Player and Multiplayer are fairly self explanatory, presenting a few ways to play the color-based puzzles against the computer or with up to four local players. The Adventure mode stands out though, for better and for worse.

Adventure mode serves as the game’s story mode. It’s nice to see a story mode in a puzzle game, and this one is well presented, using that comic-style approach I mentioned earlier. It follows the humorous adventures of Nathan and his band as they make friends, start fights, clean bars, and outrun Death himself. Each level begins with a short excerpt from this story, presented in well-drawn comic-style boxes, with dialogue at the bottom. It might be a little corny at times, but it’s neatly drawn and I commend the talented artists. 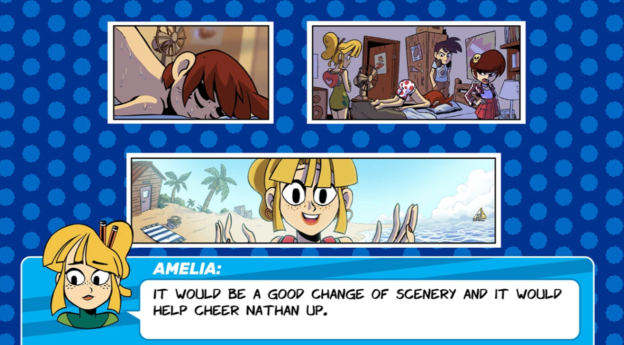 There are five acts within this mode, each containing six chapters, giving you 30 levels to play through. Each chapter has a star rating, enticing you to replay to get those perfect three stars. I personally didn’t feel the need to replay any levels – some are just much too hard. You also can’t progress without completing the current chapter, which is also a shame due to that same tricky nature. In fact, this is the game’s biggest letdown: an unbalanced difficulty level that can’t be adjusted.

Some levels are easy – usually those played solo with a limited number of moves as your only challenge. When it’s time to compete with the CPU, it’s much more challenging – and seemingly unfair. How are CPU-controlled characters able to get such high combos? This would actually be fine if it was in later levels instead of level two! This could be rectified with a difficulty setting – or any settings, actually. I’ve never seen a game without a single element able to be adjusted, be it language, music, or controls. This one offers none of the above. 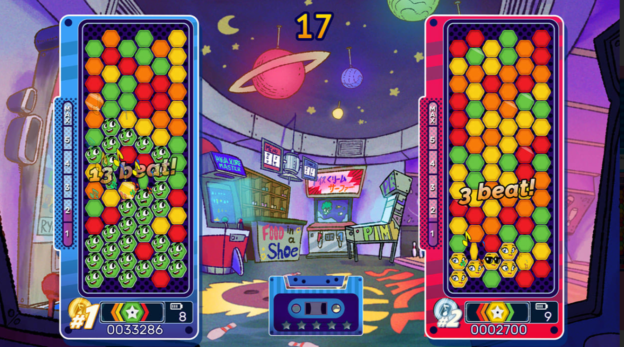 Overall, Indigo 7 Quest for Love is just ok. While there’s charm and fun to be found here, it’s not a perfect game. The concept is great and the puzzles can be fun, but the lack of settings – particularly the ability to adjust the difficulty level – is disappointing and creates a frustrating experience. I enjoyed the art style more than the game itself, though the addition of a multiplayer mode could still entice some players.

Indigo 7 Quest for Love is ok. The story is fun and charming and the puzzle mechanics work well in solo mode. Throw in a CPU and there’s suddenly an unbalanced difficulty level that’s just too frustrating. The addition of local multiplayer could still entice some players.