InnerSpace is a release I really wanted to enjoy. The thought of exploring through both the air and the water filled me with hope for a unique, sci-fi adventure. In many ways, the game does succeed in feeling different – and adventure where you are not a character, but a vehicle. But in terms of actual enjoyment, InnerSpace left me with a literal headache. 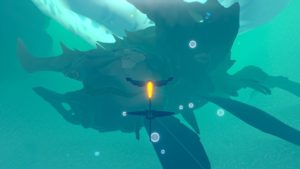 The story certainly got off to an intriguing start. You take control of a flying machine, built by an archeologist to assist in his research. The focus of his studies is the Inverse, a dying galaxy, and the Ancients, the extinct civilization that once inhabited the Inverse. While cryptic at the start, the promise of discovering highly advanced, technological secrets made me want to explore, even with limited direction. 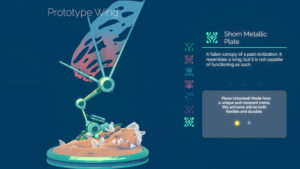 Unfortunately, the visual design of Inner Space just didn’t click with me. This “world of inside-out planets” might sound good on paper, but in terms of gameplay, it really did leave me with a headache. I liken it to looking through a pair of glasses that aren’t your own prescription. Even if you can still see okay, it’s just not a good thing for any length of time. The choice to limit the colors doesn’t do any favors either, as it just makes it easier to get lost with so much looking similar. After the first hour, I was really longing for more than just variants of blue and beige. The overall disorienting look made it tough to get my bearings, which naturally hurts the game’s fun factor.

However, the sound design meets with my approval in ways the visuals do not, which aids the overall aesthetics. The way the soundtrack picks up and drops off makes it feel like a living part of the realm. I appreciate the options to mute the occasionally shrill sound effects, which helped me to enjoy the otherworldly music, and ambient sounds, that much more. Kudos to Chris Miller for his very good compositions.

More than many, InnerSpace is the type of game you really have to play to get a proper sense of. I admit to having some fun interacting with the so-called “demigods”, and collecting various relics, especially underwater where the controls felt more responsive. But generally speaking, my time with the game was a few minutes here and there before my headache triggered. Which isn’t good, even more so for a game designed around breezy exploration. Maybe I just wasn’t the best person to review this release? I can’t say it’s bad just because I’m sensitive to its design choices. But it’s also tough for me to recommend, based on what I’ve played. Nonetheless, PolyKnight games are on my radar now, and I will be looking forward to seeing what unique games they may come up with next.

The overall disorienting look made it tough to get my bearings, which naturally hurts the game’s fun factor.