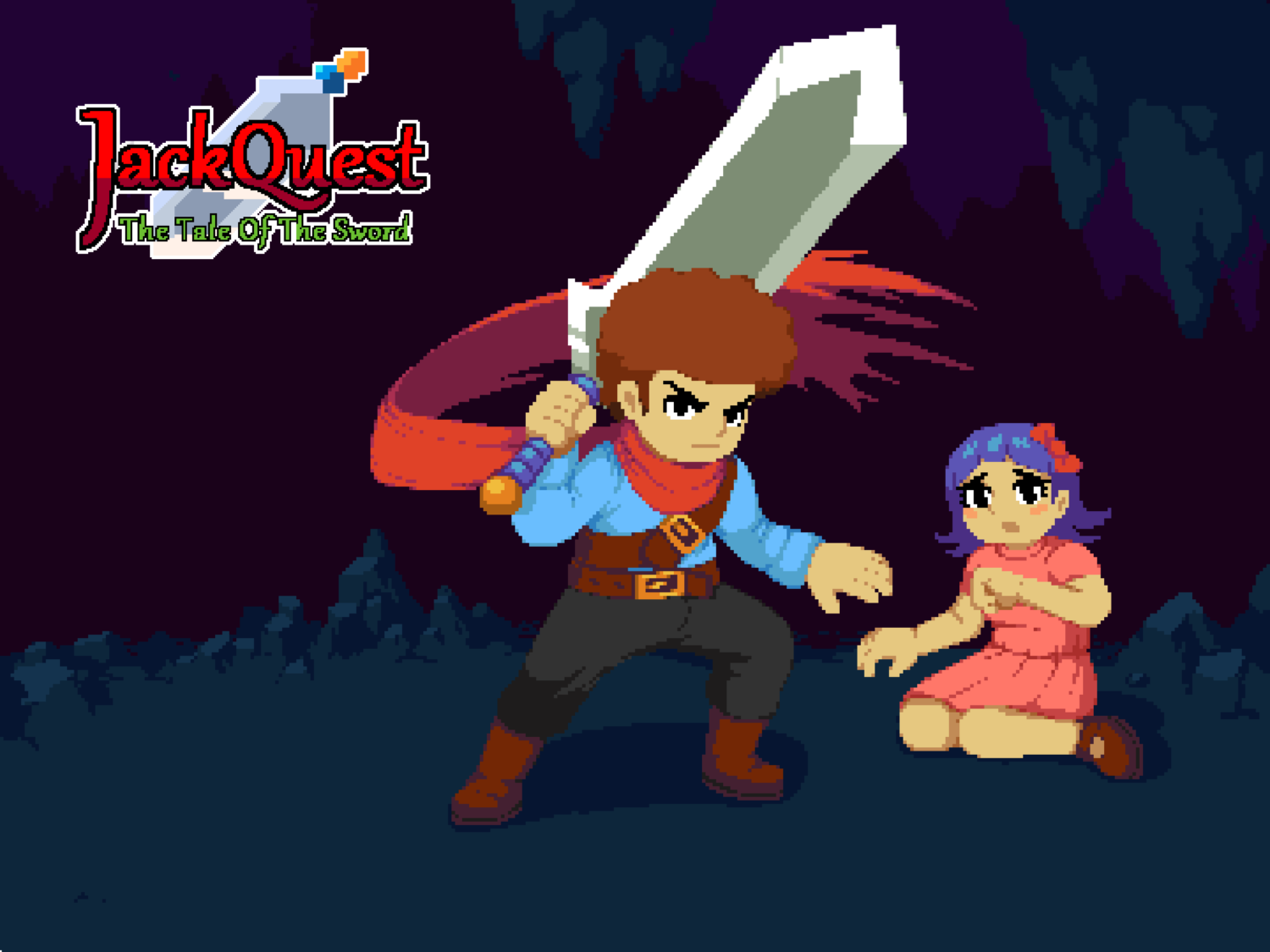 I know what you’re thinking: does the Switch really need another retro-inspired platformer? Blowfish Studios is betting on yes with its latest release, JackQuest: The Tale of the Sword. Let’s find out if it pays off. 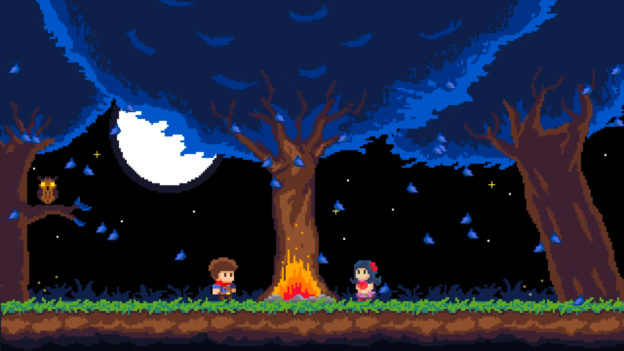 JackQuest comes across as a metroidvania crossed with Super Mario Bros. You play the role of the titular hero, Jack, as he embarks on a quest to rescue his girlfriend Nara (not unlike Mario’s never-ending quest to rescue Princess Peach). This simple premise unfolds during a brief intro showing the happy couple during a starlit date. When the ground basically opens to swallow Nara, Jack gallantly dives in after her. He enters a subterranean maze full of enemies, coins and other secrets on his path to the villainous Korg.

Jack is weaponless at first but soon comes across a talking sword. It turns out that Korg is a mutual enemy, so the pair form an alliance to take him down. Let the hacking and slashing begin! 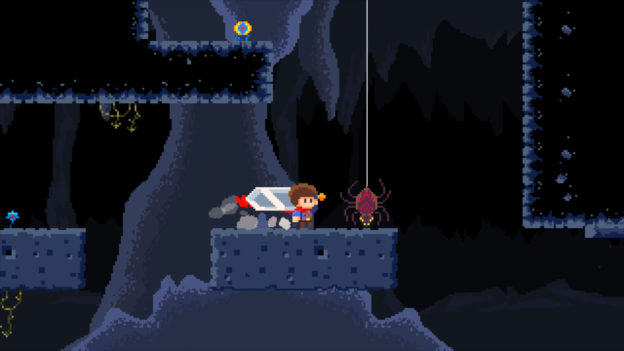 The level design is very good, with a truly labyrinthine setting that twists and turns countless times. There are blocked sections that require either a key or the defeat of a boss character to enter. This limits the amount of backtracking frustration and helps to maintain the game’s momentum.

The enemies are not super creative, with a couple of varieties of blobs, some dangling spiders and some relentless skeletons. You’ll also see some random bees and fish, but that’s about it. None are terribly difficult. The bosses are more creative and take longer to defeat, from giant slime monsters to a creepy, fast spider who spits webs at you. 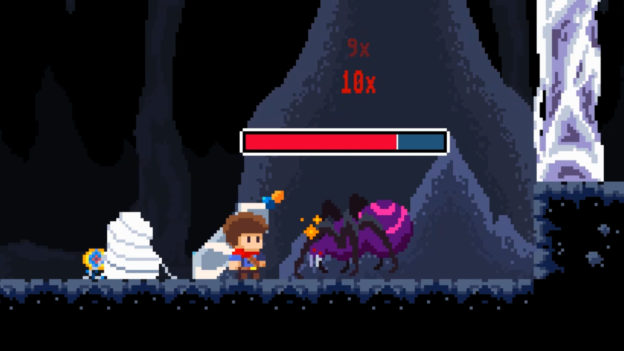 Jack’s moveset is simple too, making it easy to master. He moves at a quick pace, like Mario’s dash button is permanently pressed (which is totally my style). Jack’s fairly nimble, sporting a handy double jump, as well as the ability to jump off walls, so no area is out of reach. There are many hidden sections – another strong resemblance to Mario – providing the incentive to search every nook and cranny as you collect new gear, gems and coins. 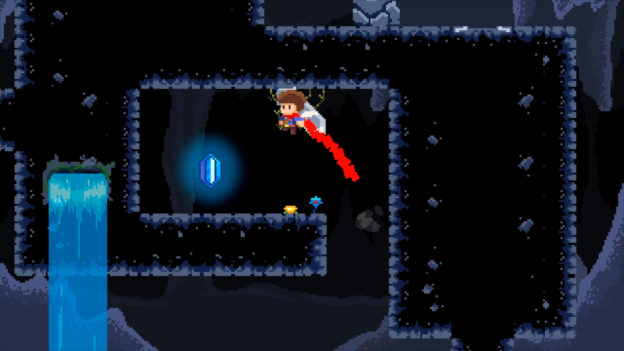 In terms of these collectibles, you’ll uncover some handy devices along the way, including a bow and arrow, high-jump boots, and some kind of diving gear for breathing underwater. Gems provide the meter for your secondary attack, which depletes as you use it. Coins are used at intervals to purchase gems, health, or a quick save. 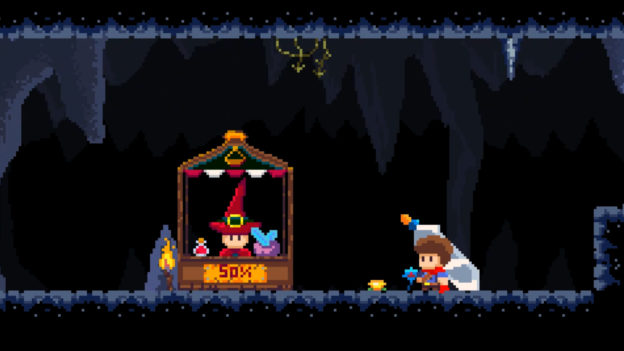 JackQuest sports a 16-bit retro aesthetic, with some strong resemblances to the likes of Super Mario World. The cave’s design looks like it was inspired by Mario’s underground levels. Some familiar traps include spinning fire blades, spitting lava, rotating spiky balls on chains, and Thwomp-like falling blocks. This isn’t necessarily a criticism since it all works well, but JackQuest could benefit from some more variety. In that regard, I did enjoy the comically huge sword. 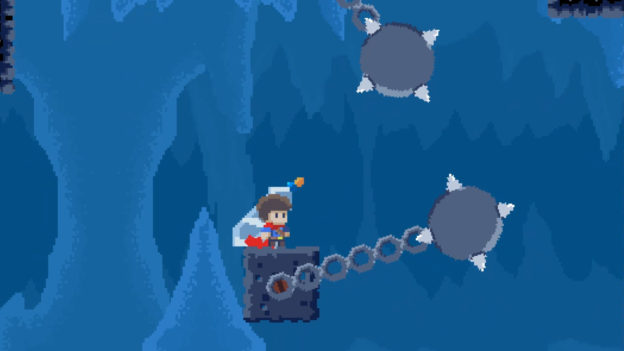 The music is great, providing a dramatic and fast background to the adventure. Despite being repetitive, it’s never annoying and only adds to the game’s quick pacing.

The game isn’t especially long, but does provide several hours of play. The difficulty level is about right, with nothing too daunting, but some tricky sections that take repeat plays to pass. There are achievements to unlock if you want some replay value, with some interesting ones thrown in for amusement, like being impaled for the first time. Other achievements include collecting all gems or defeating certain enemies. 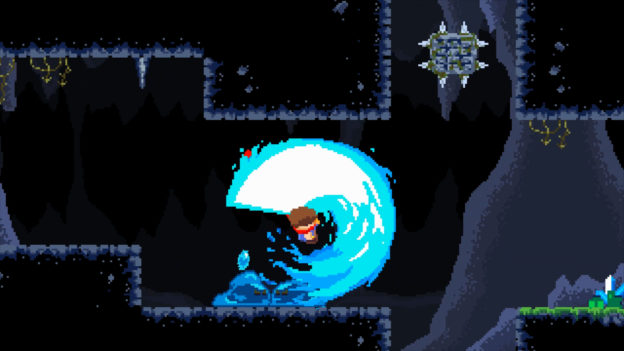 I had a good time with JackQuest and found it somehow addictive. The combination of Mario’s platforming design with the exploration and sword-slashing of a metroidvania made it a ton of fun. It’s quick and easy to pick up and play in shorts bursts – which have a habit of becoming longer play sessions. Where does the time go? Platformer fans should consider picking this one up.

JackQuest: The Tale of the Sword is an addictive combination of Mario’s platforming design with the exploration and sword-slashing of a metroidvania. It’s a ton of fun that’s quick and easy to pick up and play in shorts bursts – which have a habit of becoming longer play sessions. Where does the time go? Platformer fans should consider picking this one up.