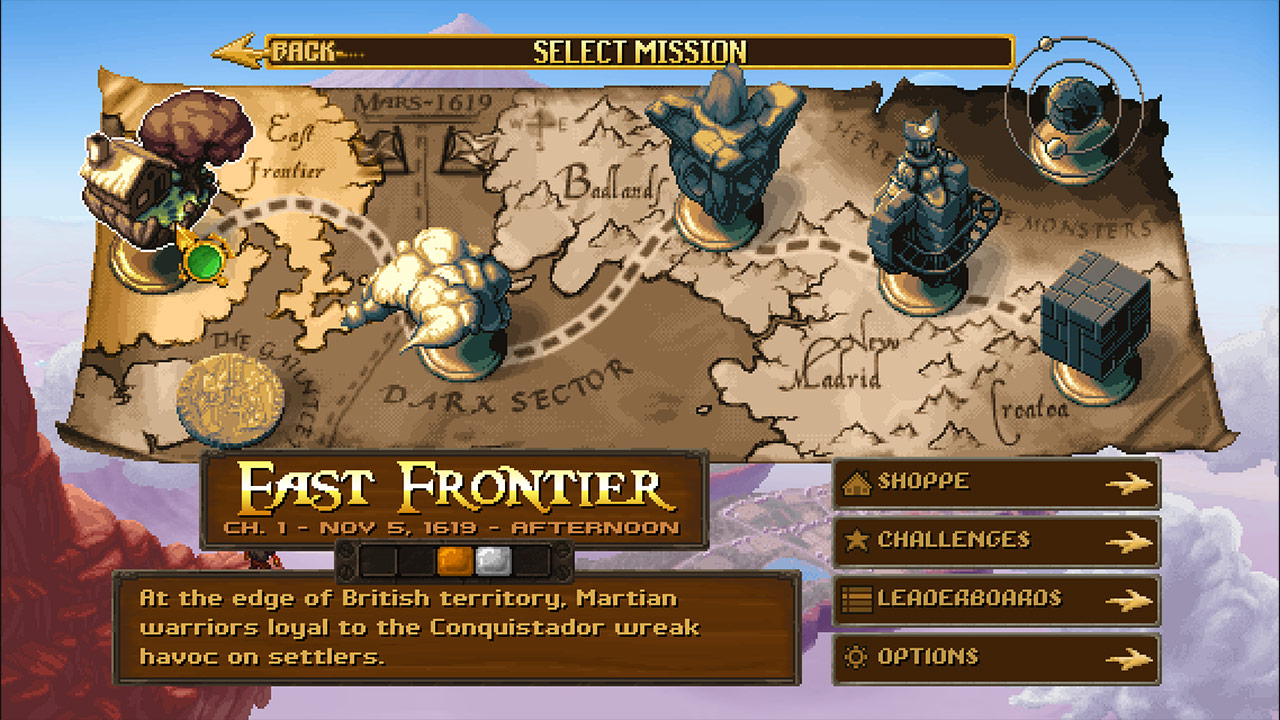 Jamestown+ purports itself as an up to 4-players cooperative shoot-em-up, but it works just as well taking on the expanses of space on your own. This game uses pixelated animation to illustrate space battles taking place across Mars—all in 17th-century British Colonial and steampunk-esque style. If you loved the mechanics of classics like Galaga, you’ll have no problem jumping into Jamestown+.

This title offers a variety of ships, each with their own weapons systems, hordes of enemies to take on with massive boss battles at the end, and a style and soundtrack that takes the player back to a simpler time in gaming with the theatrics of its unexpected setting. 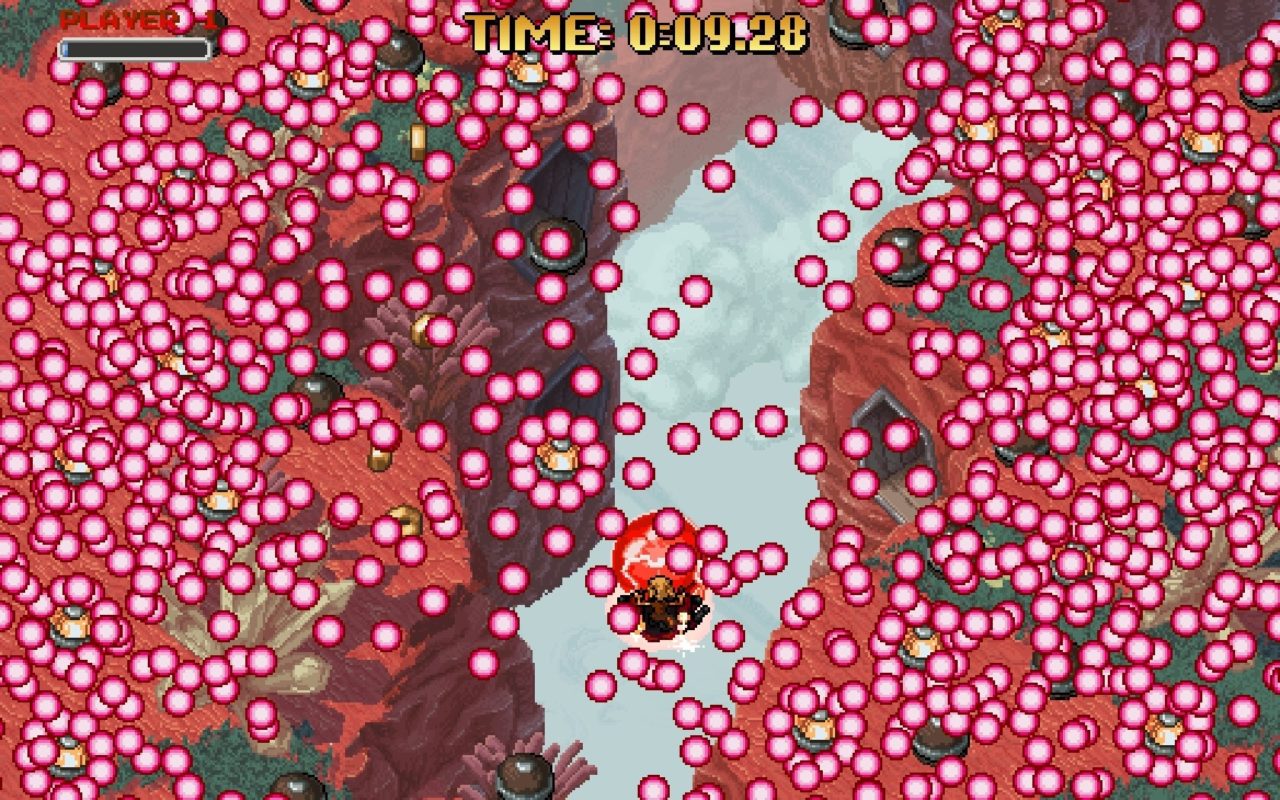 With all of these pluses for Jamestown+, however, the game is weighed down by a narrative that seems to serve to try to validate the 17th-century bent to this space battle game. And it’s one that isn’t necessary.

A Spanish Conquistador has taken over the expanses of the New World on Mars, and the only hope is a disheveled knight named Sir Walter Raleigh. Before you begin a stage, Raleigh appears to expound about being disgraced and the impending doom to be had in the selected stage. This dialogue sets to establish characters in this war, but with the stage-select and shoot-em-up playstyle, the characters and reason for war matter very little to the overall experience of the game. In some cases, the dialogue goes on between stages a little longer than I would have liked, and I often found myself skipping through after getting through the first bit to understand the gist of the story.

I see why the writers of Jamestown+ wanted to give their game a developed story. I think it’s both a calculated risk they wanted to take for its genre, but it is also a mark of the times. The games we play now offer infinite universes, player choices that affect characters and plots, and deep canon and lore that stay with us even after we’ve completed the game. While there is a place for easy to pick-up arcade titles, many gamers and story lovers crave depth in modern gaming.

I love the idea of the New World colonization happening in space versus the Americas as we knew it. An “alternate universe” story comes with its own changes to the narrative and history we know, and that can be thrilling to explore. I can even appreciate trying a more narrative style to fit in with this Galaga-esque title. Unfortunately for me, it just didn’t work for the pacing I wanted to take in the game. Perhaps if the opening sequence remained somewhat brief but established more of this story, there wouldn’t have been a need for the constant dialogue breaks. 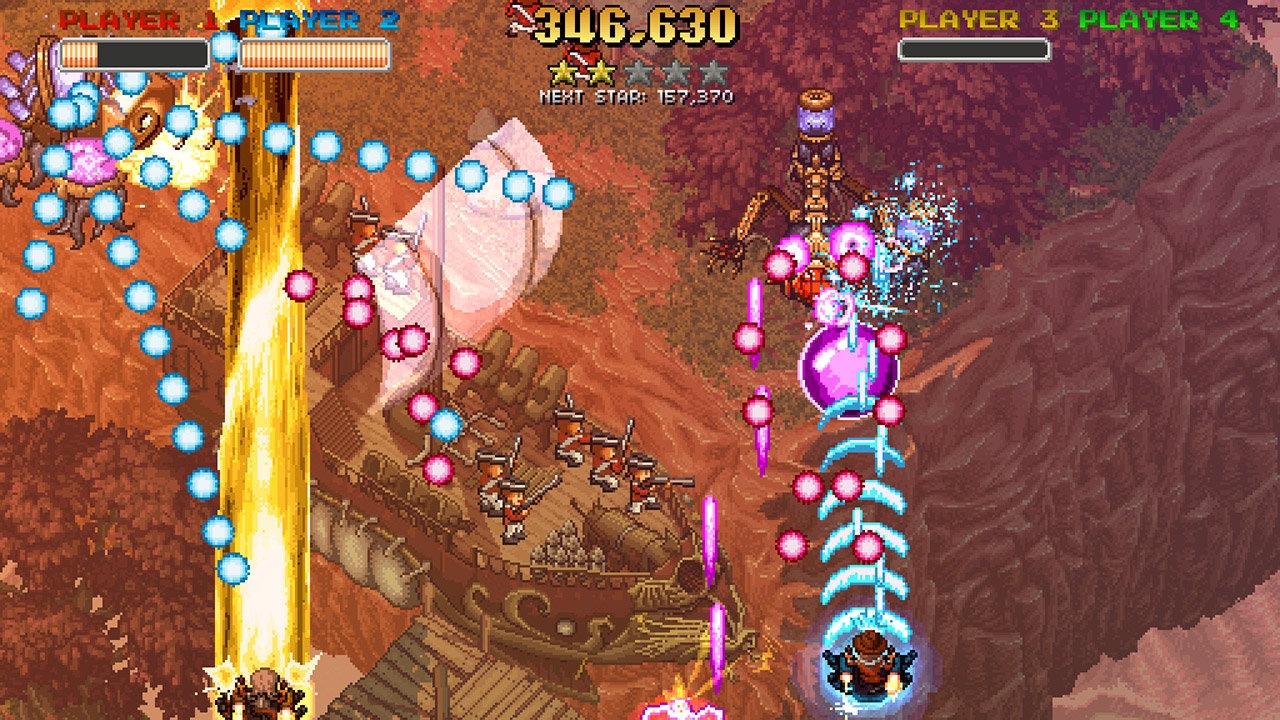 An additional pitfall was how the game played with the Nintendo Switch undocked. As a single-player, if you didn’t have access to your TV and docking station, you couldn’t play with the Joy-Cons connected to the Switch. Instead, I had to disconnect my Joy-Cons and prop my Nintendo Switch up to play. This seems like an incredible oversight for a hybrid console. It is nice that you can play it undocked, but there’s definitely a lack of accessibility by not allowing players to have the Joy-Cons connected. Perhaps this is because of the game’s push for you to play multiplayer, but there should be some anticipation for solo play. For example, if I were on a bus or train and wanted to play, I wouldn’t be able to safely stand it up while in transit. And I do take public transportation in my city a lot.

Jamestown+ offers all the addicting gameplay and eye-catching flare of titles like it from the past. I enjoyed jumping between stages and trying out new ships to see what works best against the tentacled and steampunk crafts and Martians. But I am a huge fan of Galaga, so finding enjoyment in this title wasn’t hard.

Jamestown+ doesn’t lose any of its graphical grit or unique charm playing docked or undocked, and the game itself is hard to put down. Even in multiplayer mode, it offered a lot of scalable battling for those playing with friends. Perhaps with more consideration for its narrative structure, and how the console is handled undocked, Jamestown+ can draw in even bigger audiences.

Jamestown+ is highly enjoyable for users who appreciate a fast-paced and competitive shoot-em-up. While the game is weighed down a bit by story, and the game doesn’t allow for the Joy-Cons to remain connected when the Nintendo Switch is undocked, this title still has something to offer for those looking for an addictive game with a unique setting.