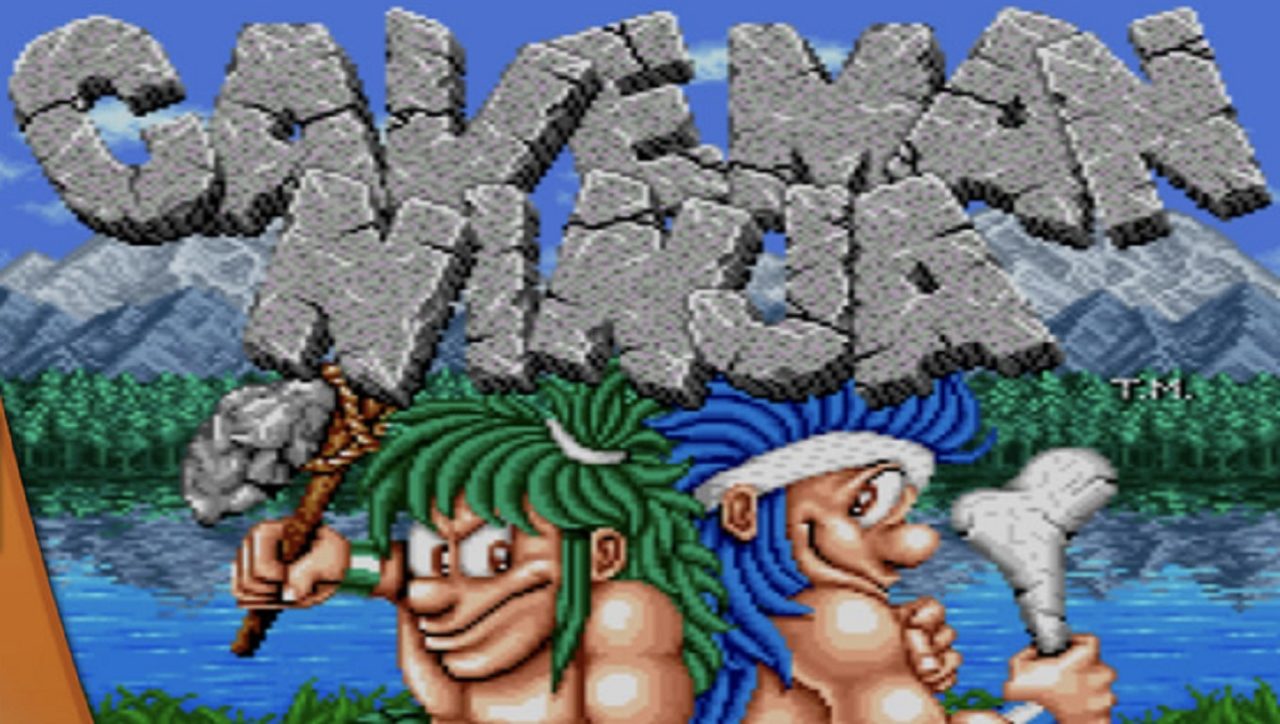 I hadn’t heard of Caveman Ninja before. I don’t ever remember seeing it in an arcade. I am, however, familiar with its console port, simply titled Joe and Mac. I used to play it on my friend’s SNES and have fond memories of it. When I saw Caveman Ninja in the eShop, my initial thought was, “Isn’t that Joe and Mac”? With a little research, my question was answered. I added it to my wishlist immediately. So with the chance to review it, I wondered if its enjoyment would be from nostalgia or actual gameplay. Let’s find out.

As far as the story goes, this one is rather simple. The game opens with several cavemen carrying away multiple cavewomen from a hut. Apparently, Joe and Mac take it upon themselves to rescue them.

Player one plays as Joe with green hair, and player two plays as Mac with blue hair. They battle their way through a variety of prehistoric levels. Each player has a close-range club as well as a projectile tomahawk. Breaking open dinosaur eggs reveals a power up inside, such as wheels, fire, spikes, and boomerangs. Players can hold down the attack button to throw a much larger and more powerful projectile. If the button is held down too long, it will result in the player becoming winded and leave him open for easy attack.

One of the most frustrating parts of the game is the health system. Over a period of time, the player’s health bar drains, even without being hit. With plenty of enemies attacking on-screen, the game is already challenging.  The draining health system adds a certain degree of difficulty to an already difficult game. Luckily, by defeating enemies, they drop a variety of food items that help replenish your health. Some food items replenish more health than others.

Johnny Turbo was nice enough to add a save feature to the game so you can save at any time and pick up where you left off. Another way of making it a bit less difficult is you basically have unlimited continues.

When I first started playing, it felt as though the game was only fun due to my childhood memories of the game. But the more time I put into it, I eventually reached levels that I had never seen before. I would say that players who never played the game will certainly enjoy Caveman Ninja.

Caveman Ninja, although difficult at times, has a lot going for it. Whether you have fond memories of pumping quarters into an arcade box or playing one of its console ports – even if you have no previous awareness of the game – it certainly is fun. Using the save ability and unlimited continues also helps dwindle some of the difficulty. My time spent with the game was enjoyable, and worth the $7.99 price tag. For those who love a good action platformer, Caveman Ninja is for you.

Caveman Ninja, although difficult at times, has a lot going for it. Whether you have fond memories of pumping quarters into an arcade box or playing one of its console ports – even if you have no previous awareness of the game – it certainly is fun. Using the save ability and unlimited continues also helps dwindle some of the difficulty.