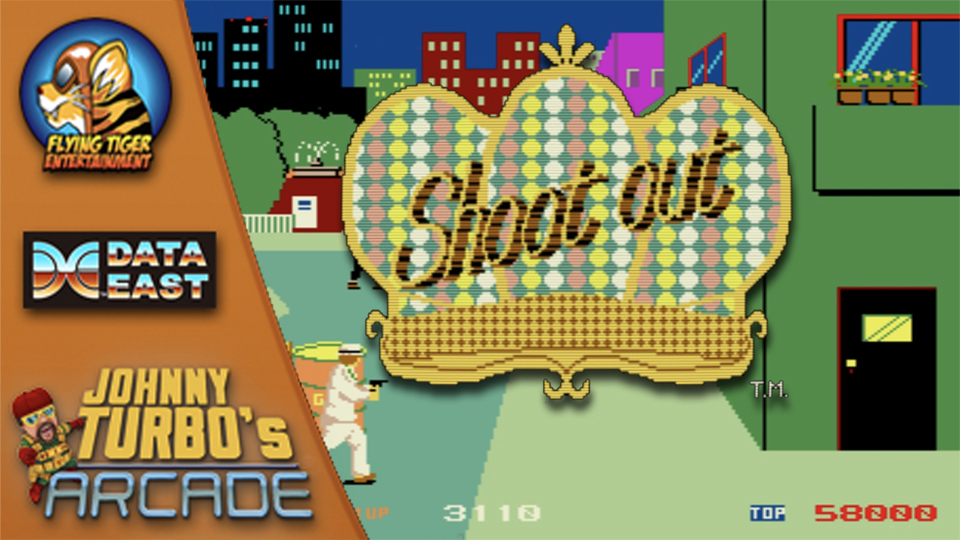 If you haven’t had your fill of Johnny Turbo’s Arcade games on the Nintendo Switch then you’ll be excited to hear about one of the latest additions. Shootout was originally an arcade game released in 1985 by Data East. This shooting-gallery style game was played with 2 buttons and an 8-way joystick. Using the joystick, the player moved around the screen, shooting at the bad guys as they appeared and avoiding the good guys. It’s really a very simplistic game. I suppose the real questions is, is it worth buying for your Nintendo Switch?

If you’re a fan of arcade games then you’ll appreciate everything Shootout has to offer. Content wise, the game is lacking. But what arcade game isn’t lacking in content? There are 8 levels in all, including a target practice stage. My first time playing was pretty horrible. It was hard to control where the gun was pointed, and the most frustrating part of the whole experience was dying like 20 times before I realized I could jump over bullets and projectiles. Enemies will pop out from every nook and cranny so be ready to change direction as quickly as possible. Also, don’t forget to avoid getting hit, because you will die instantly. 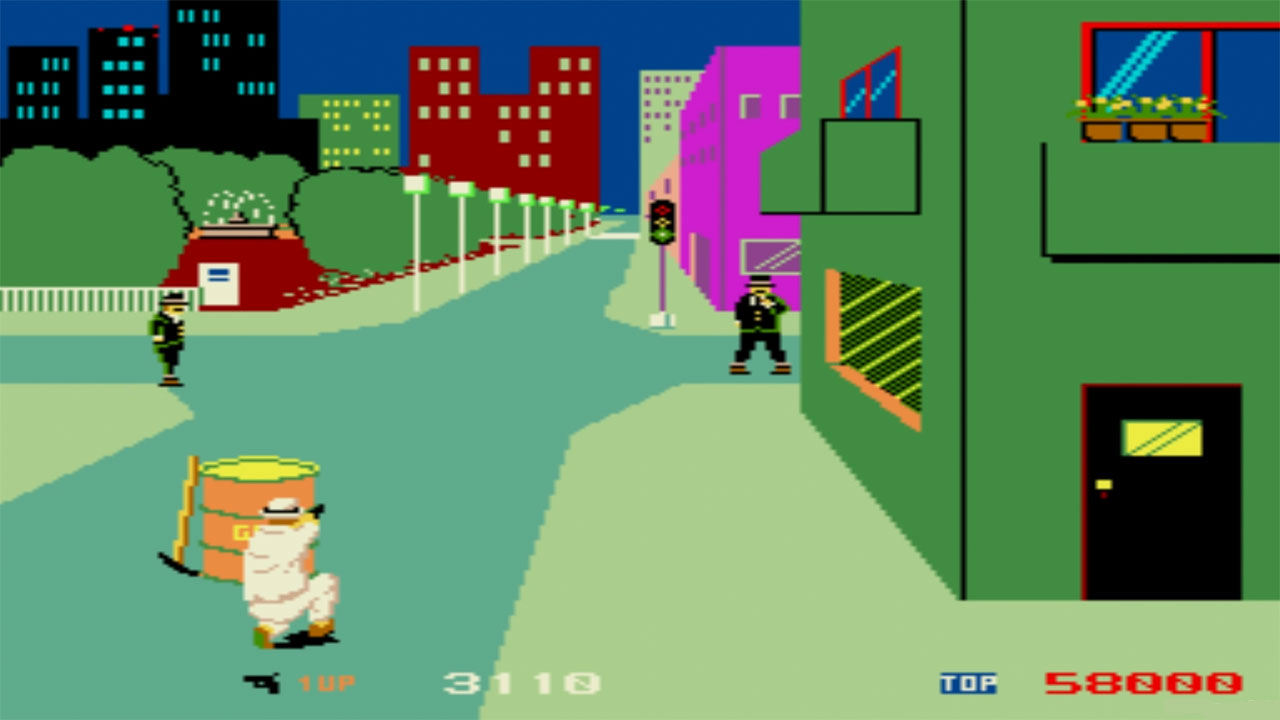 That’s really my only qualm with Shootout, that I hated having to start the levels over and over and over because I couldn’t avoid being hit. While my skills might not be on par with the pros, I think it’s because the character moves slower than I want him to. So, good reaction time and reflexes will help a lot. There are also a few innocent civilians who will run across the screen sometimes (amongst chaos and gunfire) so be sure to watch out for those dummies too. After completing the full set of stages they will loop back around and start from the beginning.

Each level is fairly short. If you’re good at Shootout then you’ll get through the game pretty quickly. Regardless, I liked the little details in the backgrounds of each level, and the bright color pallets. Aesthetically, the game looks pretty good on the Switch. I preferred playing in handheld mode but it was appealing either way. I would have loved some sort of option to aim at the screen and shoot, like Duck Hunt. But that would require quite a few tweaks. Still, I feel it would have been a more entertaining option, even in the arcade version. 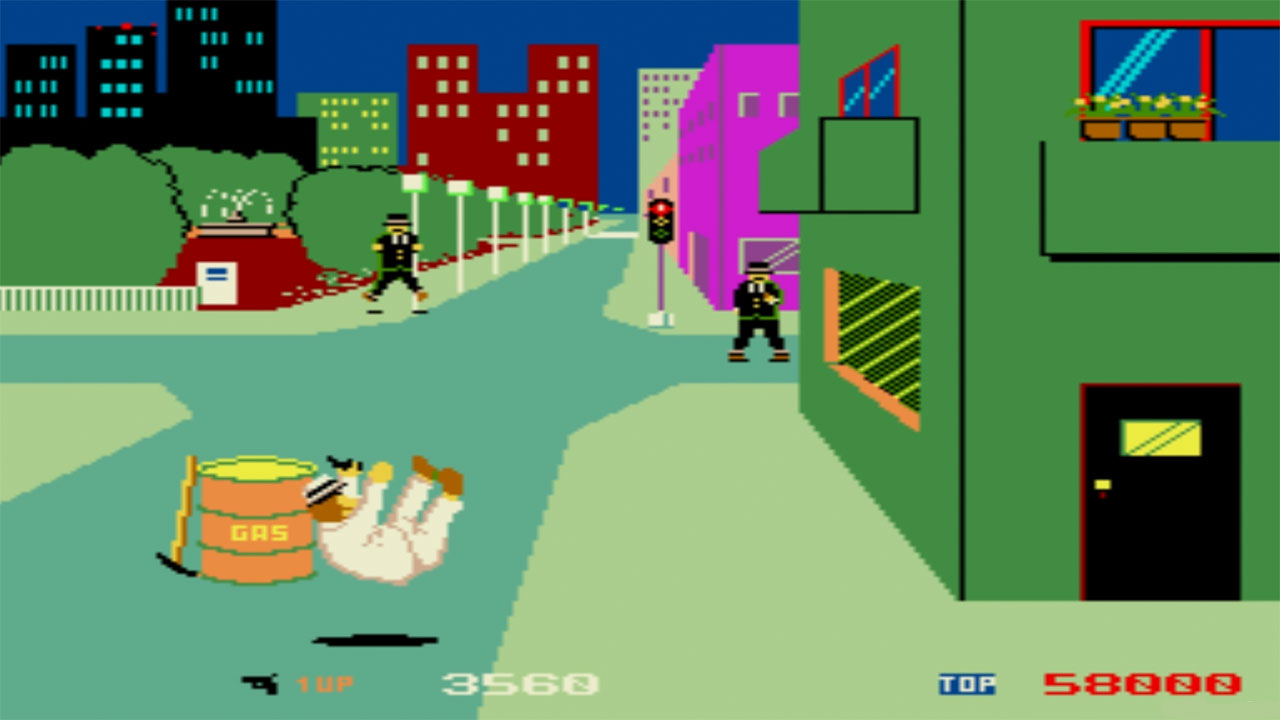 Overall, there really isn’t much to say about Shootout. Once you beat the few levels that are available all there is to do is try to reach a higher score, which can actually be pretty fun for a lot of gamers. So it all just depends on what you’re into. I personally enjoyed my experience with this short, simple game. It’s something I can play when I don’t have a lot of time or just don’t feel like getting into a big detailed game. Plus, I just enjoy all the nostalgia when it comes to these kinds of games. So if you’re a fan of retro arcade titles, or you just want something quick and fun to play on your Nintendo Switch, then I definitely recommend getting Shootout. However, if you’re looking for a more in-depth experience or something with a strong storyline, then you might want to pass on this one. Check out Johnny Turbo’s Arcade: Shootout on the Nintendo Switch eShop for $7.99.

If you’re a fan of retro arcade titles, or you just want something quick and fun to play on your Nintendo Switch then I definitely recommend getting Shootout. However, if you’re looking for a more in depth experience or something with a strong storyline, then you might want to pass on this one.