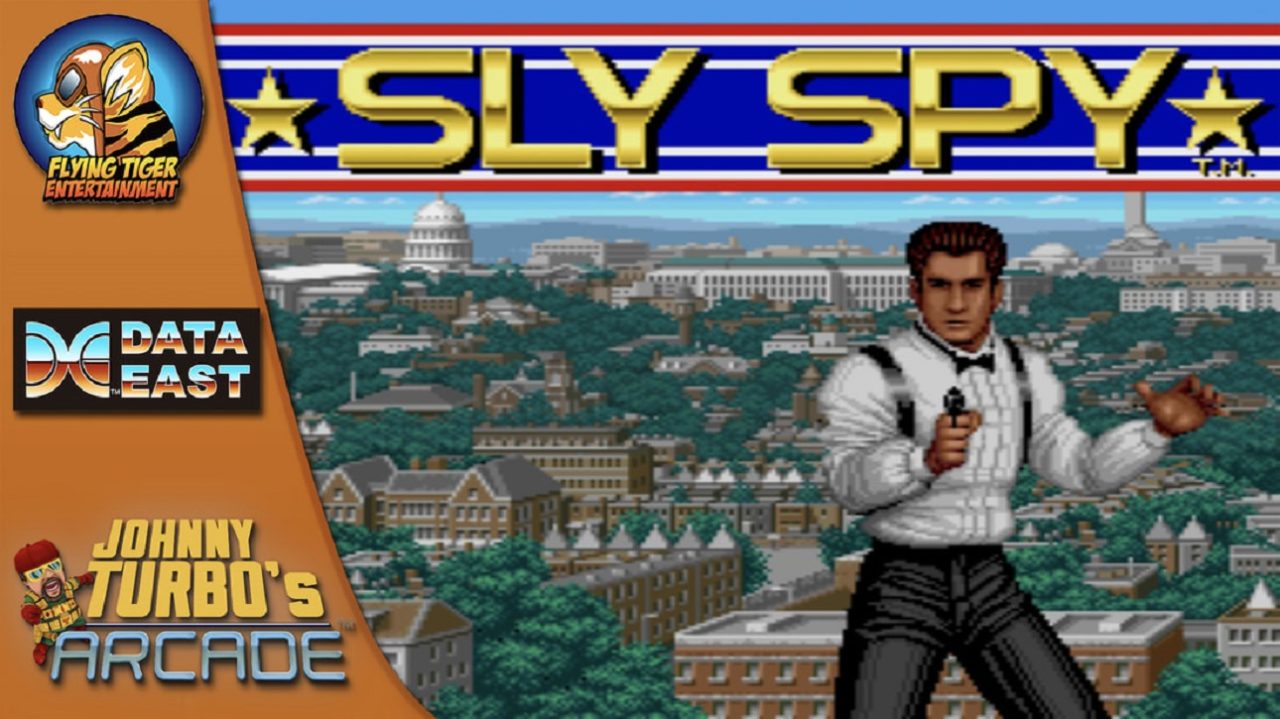 I had never played this 1989 arcade title (I don’t even recall it, honestly), but thanks to FTE Games I can now check out Johnny Turbo’s Arcade: Sly Spy on my Nintendo Switch. For a James Bond fan like me, this game’s right up my alley with all its nods to the iconic agent, even if it’s only the length of a sitcom from start to finish. Does it warrant $7.99 worth of quarters?

Sly Spy begins by asking you to input your agent’s security clearance code – of course, I’m going to pick 007. The action unfolds in the year “199X”, a classic gaming time period. Terrorists from the CWD have infiltrated Washington D.C. and set a nuclear missile. Can you save the day?

Crazy variety is where Sly Spy excels. Whether I’m parachuting into the city to fight before the Lincoln Memorial, carving it up on my motorcycle to dodge fire from the car ahead, ziplining across a ship, or jetpacking over loose tigers, there’s always something entertaining to do. 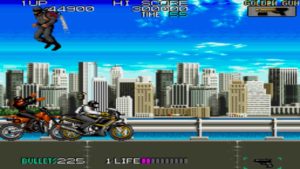 You don’t have an infinite supply of ammo, so if you get depleted you’ll need to fight your way out sans firepower. Expect to run out at least a few times, because it’s impressive how many enemies can be on screen, especially if you dawdle. Although short, a few of the levels let you choose paths. Depending on which direction you pick, enemies can really overwhelm. Try not to run out of ammo during the boss fights.

At the end (very minor spoiler) the game will tell you, “But you missed a few things. Better go back and get them.” I’ve replayed it a few times, which is easy due to the short length and infinite continues. Although I have discovered a couple of things I missed on the larger levels, the ending is always the same. Just a trick to encourage replay? 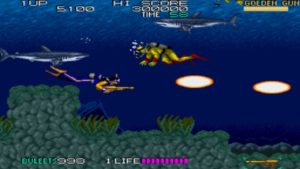 Johnny Turbo’s Arcade: Sly Spy is a good port that I had fun playing. The title takes two things that I’m a fan of (arcade gaming and James Bond) and combines them into something that must have been superb back in 1989. Even today it still manages to impress some, short length and all.

For a James Bond fan like me, this game’s right up my alley with all its nods to the iconic agent, even if it’s only the length of a sitcom from start to finish.