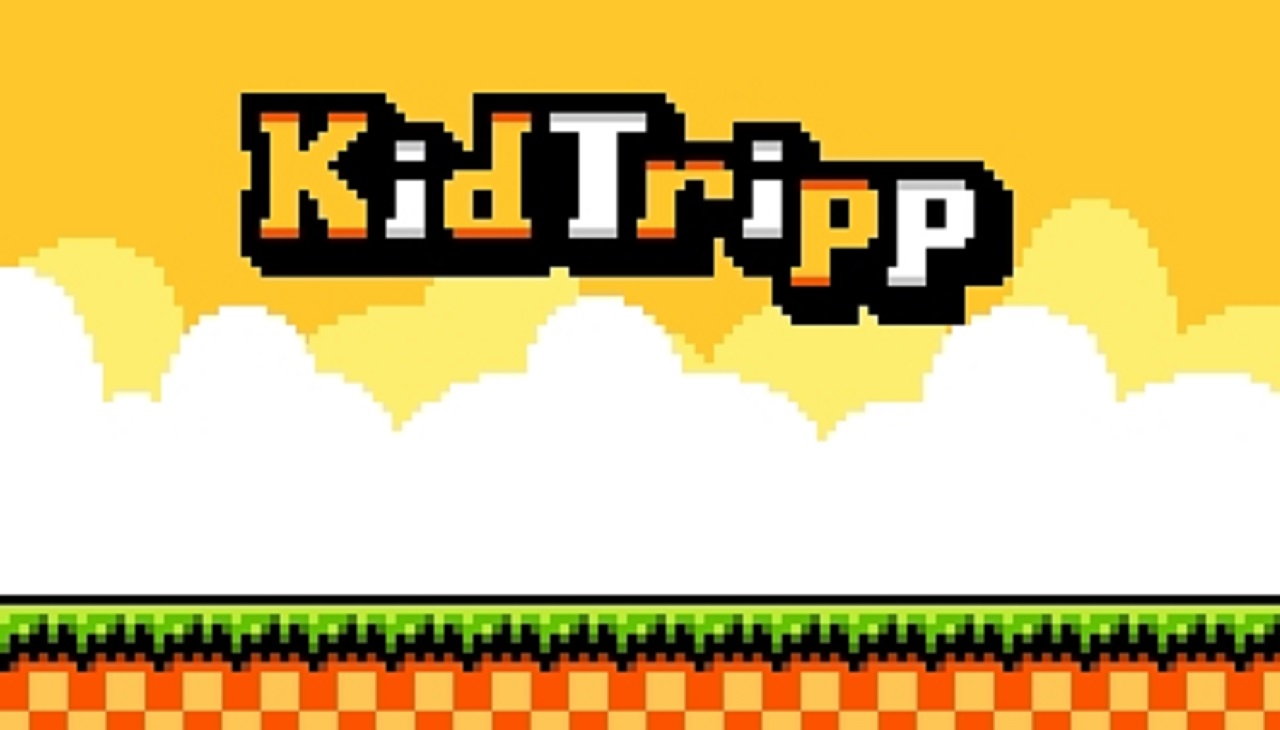 This “tough-as-nails” auto platformer has made the jump into the console realm. A Switch version will follow, but Kid Tripp arrives first on the 3DS. It looks terrific, but its style of platforming will likely only appeal to a niche group. “Have you got what it takes to help Kid Tripp escape?”

A cute little intro shows the titular character crashing his plane into a giraffe, and then proceeding to be chased by said giraffe and other island wildlife. Don’t be fooled though, this game is hard from the get go – there are no real gentle levels to break you in, especially if you want to collect every coin. However, the levels are short, which is both good and bad. It helps cut down on frustration, but makes for a game light on content.

Besides the main objective of beating twenty levels (spread over 4 worlds), you can also earn trophies through various challenges. Some are straightforward, like getting a gold medal through collecting all coins. Others are much more involved. I have completionists leanings, but here a trophy isn’t really enough for me to retackle such a high challenge. That said, I did earn a couple in regular play.

Kid Tripp is a looker. It’s smooth, with vivid colors, and adding 3D gives it a nice, extra pop. For fans of pixel art, you’ll probably enjoy the visuals as much as I did. The retro soundtrack ends up suffering though, as you’ll be hearing the same tracks over and over through constant failure. The controls feel like traditional ones modified from mobile touch.

As I mentioned earlier, the game is short. A determined player can probably beat it pretty quickly. It feels longer to the extent that you’ll have to replay certain levels over and over. In fact, I could only do a couple at a time, playing this game in 15-minute increments before taking an extended break.  While I admit a certain satisfaction from learning and mastering each level, the trial and error gameplay often made failure feel less deserved and more unavoidable. This game rewards memorization, and relief comes from that.

Again, Kid Tripp looks terrific, but the gameplay can often discourage. I don’t always find it entertaining – at times I flat out dislike it. There’s not much content here either. I’d really enjoy seeing the developer, Four Horses, make a sequel with full control. Meanwhile, those curious might grab the mobile version for 99 cents to decide if the control changes and 3D effects are worth a few extra bucks. This game is also coming to the Switch. If you want to support the developer, Digger Dan DX on the 3DS is just $1.99.

While I’ll miss the 3D, I’m hoping the Switch version will be even better.