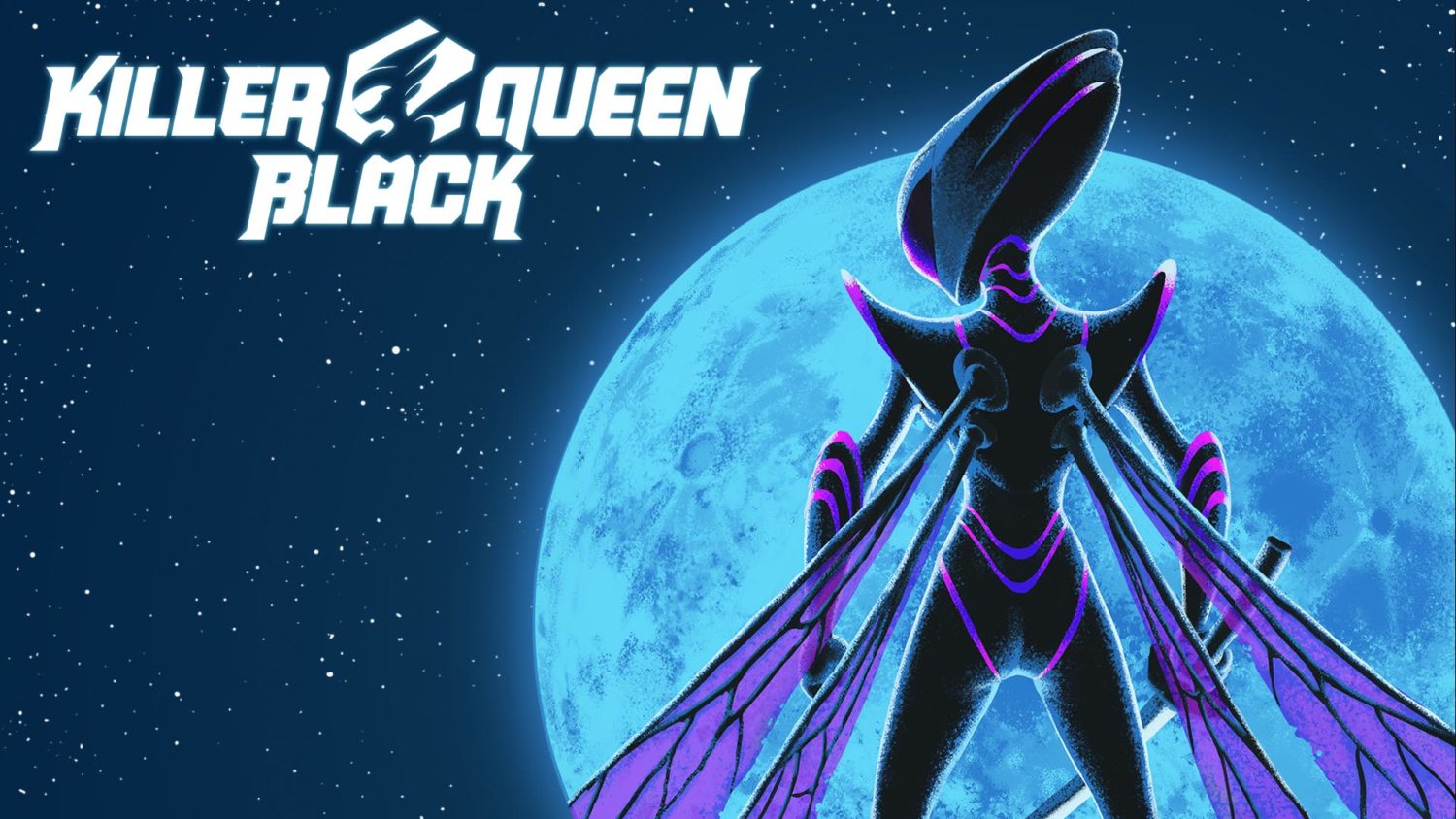 One of my first experiences with a Killer Queen arcade cabinet dates back a few years ago at my local barcade. As soon as I entered the establishment, I noticed many people surrounding one single cabinet with a 49-inch LCD screen and was curious to see what the hub-bub was about. What I saw was the type of competitive and chaotic arcade action that I personally had not seen in quite some time. From that point onward, my interest in Killer Queen grew more and more as I began to see it rise in popularity among barcades and even as part of the eSport scene. And now, that arcade phenomenon can finally be experienced at home, but in a slightly cosmetically different way. Even with a few tweaks to accommodate it for home consoles, Killer Queen Black on the Switch faithfully recreates the tense, quirky, and fun of what I first saw in the arcades and then some. 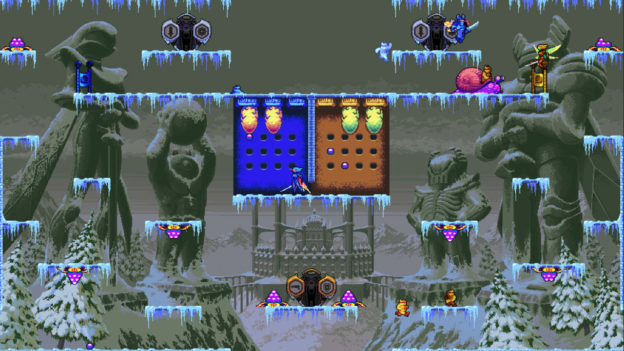 The gist of Killer Queen Black’s central focus and gameplay is quite simple to understand for any newcomer. The big differences between the arcade and home version are a brand new art style, online play, and that instead of a cap of ten players it now dwindled down to eight. The decrease in players may sound like a downside to those who adored the arcade version, but it certainly doesn’t take away that much from the fun multiplayer aspects of it all. Dubbed a real-time strategy platformer, Killer Queen Black pits you between two teams in the role of either a queen, soldier, or worker where you must defend the hive and claim victory in one of three various ways. These methods are economic, military, or (a personal favorite of mine) snail. Economic victory has you the worker hopping from platform to platform on the screen to gather a set amount of berries to take back to the hive. Military victory requires that you kill the queen three times. And lastly, there’s snail victory, which is achieved by having one of your drones ride a snail slowly but surely to a finish line at your base.

Each of the three victory conditions offers their fair share of strategy and well-placed cooperation amongst your teammates. Overall, it’s what makes Killer Queen all the more appealing with each of these options as there isn’t a boring offensive or defensive way to go about achieving said victory. Now while the arena is all one screen, it can become a bit disorienting on prioritizing your objective. Matches typically don’t take too long, but there can be many instances where you are near victory collecting berries only to see your queen killed the third time. It’s moments like these where communication and keeping an eye on multiple things on screen can be both thrilling and a tad exhausting. But, alas, that’s all part of the fun to be had. Again, if you are not paying full attention, it can be easy to lose your grasp on winning a series of matches. 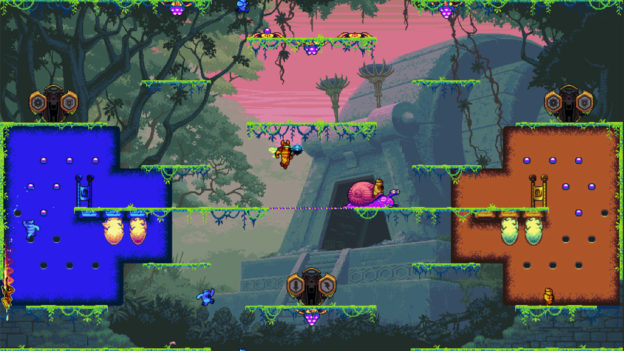 Aside from the changes of a 5v5 to a 4v4 format for each team and a fresh coat of paint, Killer Queen Black also adds online multiplayer with three modes to sink your teeth into. Unranked Mode is you fighting alone or with friends that won’t affect your rank. Ranked Mode, obviously, is the more challenging of the three where you compete to increase your rank or climb atop the leaderboards. Finally, there’s custom match, which gives you a private game that can be filled with either up to seven friends or mainly computer-controlled bots. If you see yourself rusty with your skills, there’s always Spectate Mode to see and study how some expert Killer Queen players strategize in their victories. Each mode has its perks, but I found custom matches to be the best in honing your queen or drone skills with a surprisingly tough AI opponent. While playing against others in ranked mode is the definite high-tier option, custom matches do at least offer a nice offline alternative to improving your play. 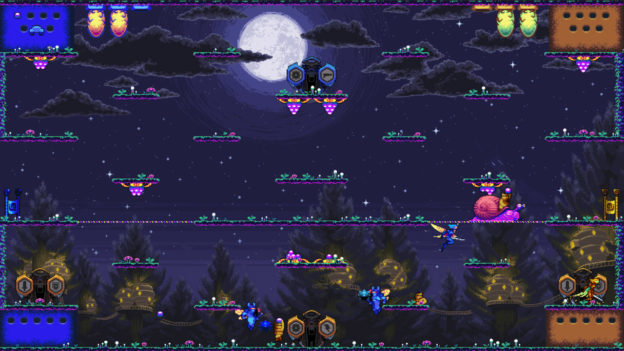 Now if you want to get the full, ideal local multiplayer experience with friends out of Killer Queen Black, sadly we have to report it comes with one caveat: it requires another Switch console with a copy of the game. Yes, finding another person with a copy of the game shouldn’t be that big of a hassle, but I still found it kinda disappointing that playing locally via one Switch was not an option. One’s belief would have to assume the reason for this deals with technical issues, but regardless there’s still a ton of joy and addictive multiplayer with 4v4 whether online or with bots. Thankfully, though, cross-platform play and voice chat (provided by Vivox) is also available at the start to broaden the horizons of matchmaking and communication. 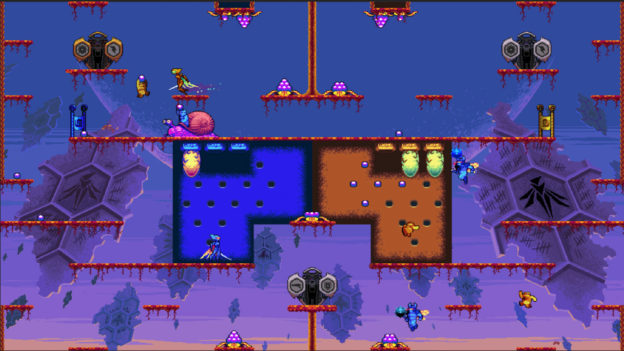 Killer Queen Black is a frantically fun and almost near-perfect, from the ground up recreation of the modern-day arcade favorite. While the requirement to have a second Switch and an extra copy of the game for access to the full local 4v4 multiplayer experience is a bit of a bummer, there’s still enjoyment throughout the entire package. Whether it’s slowly riding a snail to the finish line, hoarding every single berry to your nest, or striking down your enemy’s queen last life, the joy of the original Killer Queen I first experienced is indeed intact on a home console.

Killer Queen Black is a fun and faithful recreation of the original arcade title. While the aspect of simulating ideal 4v4 local multiplayer matches has its technical issues, the transition from the arcade to home consoles surely doesn’t lose any of its competitive addictiveness.