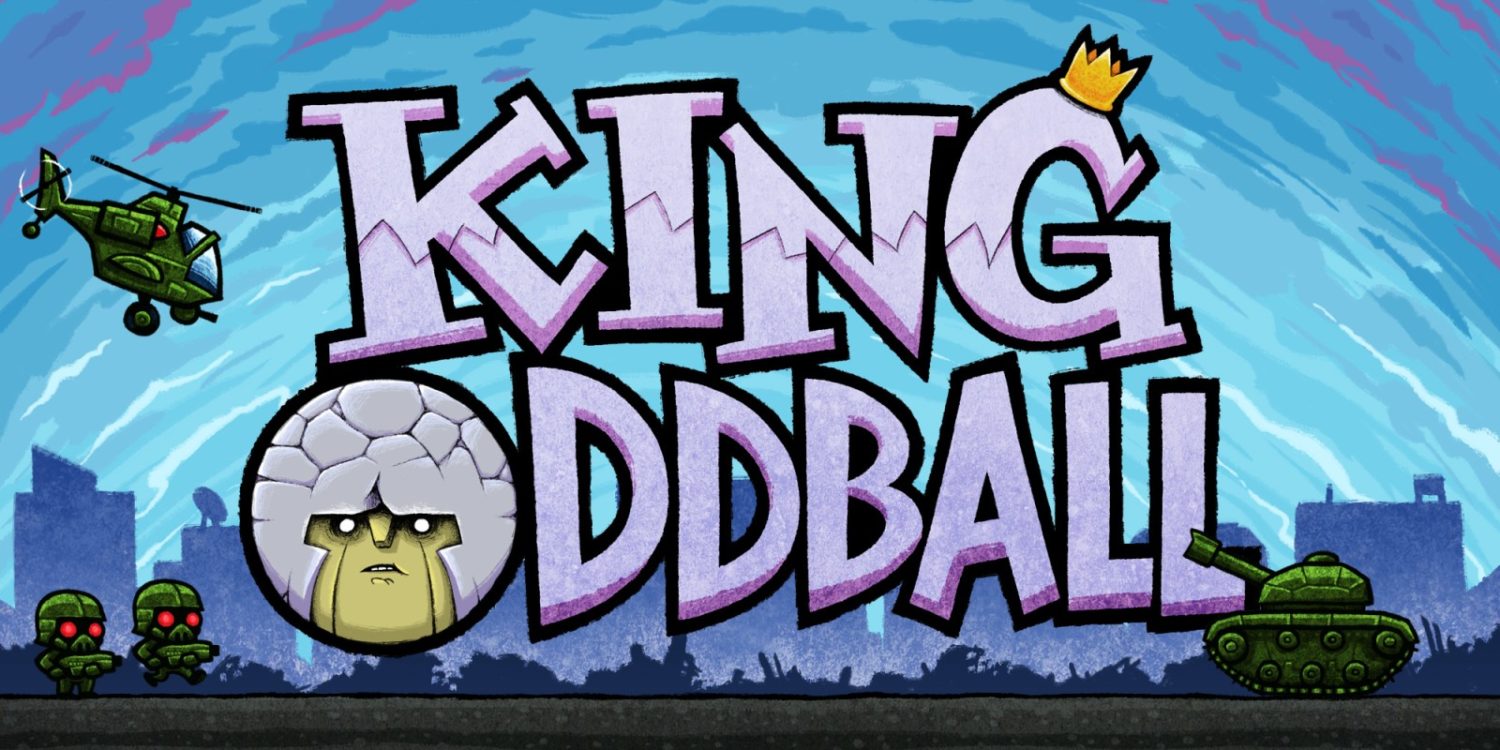 For many Switch owners, 2017 has shown that there’s no shortage of great indie titles to sink your teeth into in between big name titles. However, aside from those various indie titles, the Switch has also seen its share of mobile entries grace the platform. King Oddball is just another example of this with the quirky little title bringing forth some engaging and slightly addicting elements in the form of fun physics-based mechanics. 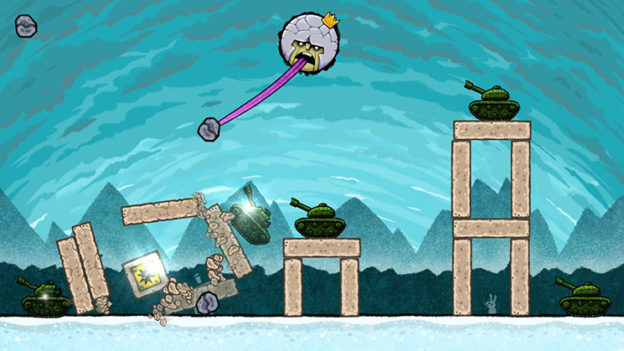 Developed by 10tons, King Oddball is a puzzle game that relies heavily on physics-based gameplay alongside a one-button control scheme. From the sound of that, one may make the obvious comparison to a popular mobile title like Angry Birds; King Oddball does things a tad differently enough that it feels separate from its fellow casual offerings. In King Oddball, you control, well, The King, a disembodied floating boulder head who throws rocks with the use of his tongue at enemies such as tanks, attack helicopters, and soldiers. As you can probably tell, the story and concept here are…strange but charmingly quirky. But, all of it is rather simple to the core and will soon have you wanting to master every level with precision hits. 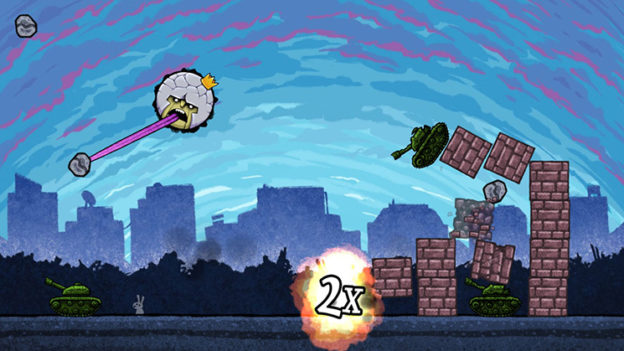 As you begin, you will only have control of when The King will propel rocks at enemies as he sways back and forth like an obscure pendulum. It is here where you will need to concentrate on the right moment to release a rock, and allow physics to come into play in order to destroy each enemy. You are given three rocks to use in play, but have the opportunity for extra throws if you somehow ricochet a stone off multiple enemies or back toward you. Depending how many enemies you defeat with the least amount of attempts, your score will be greeted with words flying on the screen such as “Epic Win” or “Pretty Nice.” Sure, that doesn’t sound like much encouragement or fanfare, yet there’s a simple joy to completing a level with a well-timed precision toss that went better than expected. 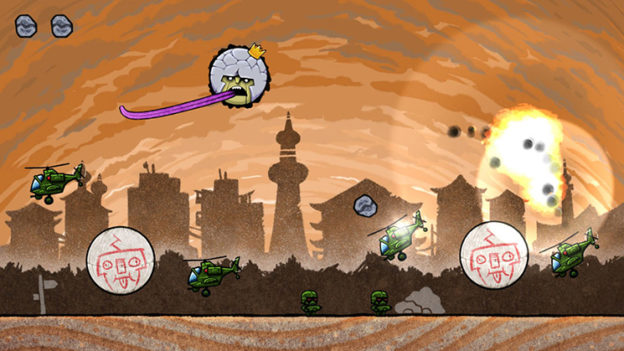 Your progress throughout King Oddball’s 100-plus levels is charted through a 4×4 grid map. By completing a level, you gain access to a new square (level), which in return also opens up new modes of play. The modes in question being Hall of Diamonds, The Boom Challenge, and The One Rock Challenge. In the mode, Hall of Diamonds, you are using less rocks to complete levels; The Boom Challenge has you in control of grenades rather than rocks; and The One Rock Challenge, as the title accurately describes, asks you to complete levels with using only one rock. These modes offer plenty more options when you are finished with the main game, which could easily take you three to four hours to complete. That, of course, depends of your rock-throwing skills, which for me proved to take some time to master. Every time I felt like I let go of a rock at the right moment, it ricochets in a direction I didn’t intend to. Yet, for every attempt, I felt like I botched, physics takes over and suddenly I destroyed the last remaining enemies with my final rock. It’s moments like these where I was either frustrated or surprised in in the game’s physics-based concept. 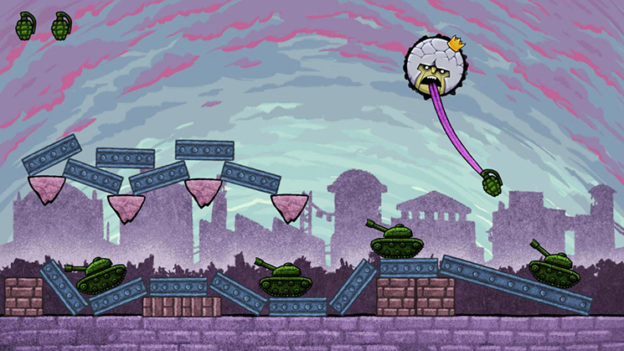 Much like with Angry Birds, the environments and placement of enemies are what you will need to focus on when carefully flinging a rock at one tank to the next. Some levels may require you to take out a tower of enemies that, when hit, with a projectile will fall causing a chain reaction of explosions for one’s own glee. Even with a one button control scheme, the idea behind King Oddball is engaging. Throughout each level, I was experimenting with ways how to decimate each and every tank or helicopter with as little attempts as possible. The physics-based gameplay and the strategy of using the right amount of velocity for better throws is addictive enough for one to master every level. However, one’s enjoyment in King Oddball depends on whether you prefer a game of this type where you have more control or one with a simplified scheme that hinges on precise maneuvers. 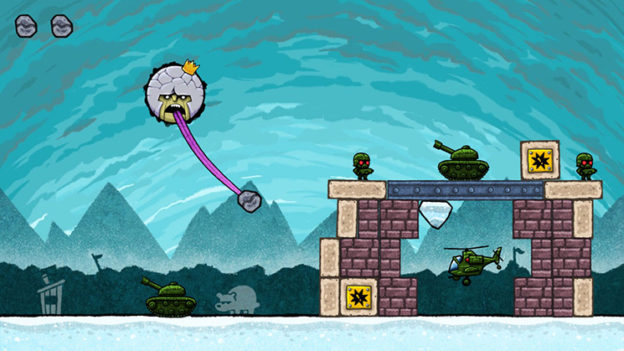 King Oddball, for all it has to offer, is a strange, quirky, yet surprisingly neat budget title for the Switch. While it will take some time to fully master, this physics-based puzzle title has quite a bit to enjoy with its many levels and varying degrees of challenge and extra modes. Although, while still a mobile title with simple one-button mechanic that one may easily compare to other popular entries, King Oddball has enough to grab your interest in short bursts. It’s simply a matter of how interested King Oddball can keep you, even if physics are against you all the time.