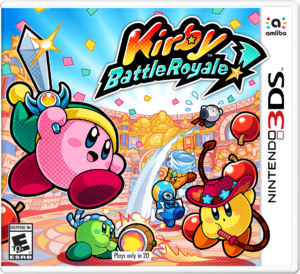 It’s a better late than never release for Kirby Battle Royale in North America. This competitive action game is driven by the pink puff’s appetite, specifically his desire for cake. Said cake can be won in a battle tournament hosted by King Dedede. Of course, the double-dealer has a trick up his sleeve; a Kirby printer for Kirby copies. The story mode has you working through different leagues, battling Kirby clones to earn points and a trip to the finale. There are ten different battle types here, so let’s briefly touch on each. 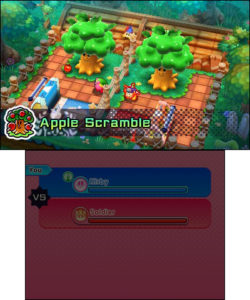 Apple Scramble – Get as much fruit from Mini Whispy Woods down the chute before time expires. Will you focus solely on collecting, or try to hinder your rivals? It’s especially fun in local co-op, where you can strategize as a team.

Attack Riders – You’re standard beat em up… until vehicles make an appearance. The circular playfield limits how easy it is for you to avoid hits. An okay battle that’s lacking in depth. 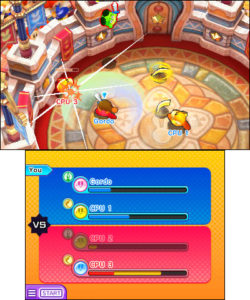 Battle Arena – A fairly typical, but fun, brawler, where you try to KO all your opponents. Some careful timing will determine how long the matches go on. Set on the highest difficulty setting in a free-for-all for a challenge.

Coin Clash – Collecting coins is always gaming fun. However, the catching mechanic, that can turn this into a game of tag, makes it feel a bit random. One of my least favorite battles as a result.

Crazy Theater –  A series of quick challenges that’s nicely reminiscent of WarioWare. My only letdown is that the trivia isn’t Kirby related, just simple arithmetic.

Flag Ball – Get the ball to your team’s flag, which isn’t always as straightforward as it sounds. Having a high percentage time with the ball doesn’t necessarily translate into victory. The music tracks remind me of Star Tropics, which is an extra bonus. Like Apple Scramble, this is especially fun in local co-op. Ore Express – One of the most visually impressive battles, with sizable, scrolling levels. The scrolling also means you need to be aware of where you are in the environment, less you get crushed. Toss gems into the train cars, but watch out for the competition, which can be especially aggressive on higher difficulty settings.

Robo Bonkers – This plays like a boss fight. The circular playfield is similar to Attack Riders, which is a bit of a bummer for those hoping for more diversity. A sizable finishing bonus gives this one the potential for the odd cheapness.

Rocket Rumble –  Fuel up your rocket(s) while trying to bomb your competitor’s fuel loose. There’s some welcome tension with a risk/reward element. Board your rocket too early, and you miss out on some fuel opportunity, but board too late and you lose that ship entirely.

Slam Hockey – It’s air hockey… with Kirby acting as the paddle. Fun, but a target roulette wheel (which triples the points for hitting certain Kirby’s) feels a bit cheap. 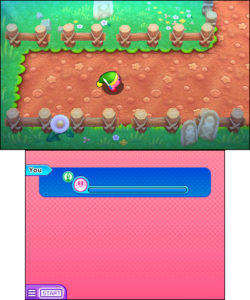 Story mode is not challenging until the very end, but Kirby games aren’t known for their challenge. After you beat it, you can tweak the difficulty higher, thankfully. While the battles repeat, there is an admirable attempt to mix things up. The level layout can change, a battle can go from team to a free-for-all, or you might need to battle with a specific ability.

There are 18 abilities for Kirby, which includes the recently added ‘sleep’ ability. It’s fun figuring out which ones work best for each battle, and a way to add challenge if you choose weaker ones. My personal favorite is the spear, as it has both a close-range thrust and a throw for attacking at a distance. The game encourages you to try many of them through the use of medals as a reward.

There are dozens of medals to earn, some of which offer a real challenge that’s otherwise lacking. There are other little extras too. Each battle has its own statistics. Optional battle bonuses give you extra abilities, but the low difficulty means I haven’t used them much. You can collect different headgear and music tracks, and it will take you a long time to unlock everything.  Completionists will enjoy this game even more. 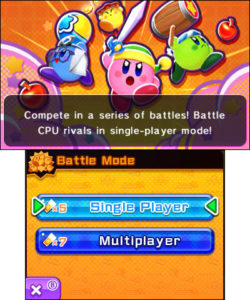 What will give this Kirby game legs is multiplayer. I did encounter one early error when trying to play online. But overall, competition is not lacking in my experience. Local is my preference, and download play is something I’m especially grateful for. The option to play cooperatively for every battle is most welcomed. Having the game split into two packs seems a little clunky, but overall I can’t complain much.

Taken on its own merits as a spinoff, Kirby Battle Royale is a pretty good game. I think kids especially will enjoy its colorful looks and gentler challenge, even more so if they have friends to enjoy it with for local multiplayer. This game has raided my anticipation for Star Allies on the Switch. 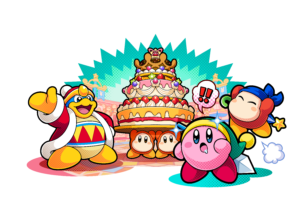 Taken on its own merits as a spinoff, Kirby Battle Royale is a pretty good game. I think kids especially will enjoy its colorful looks and gentler challenge, even more so if they have friends to enjoy it with for local multiplayer.