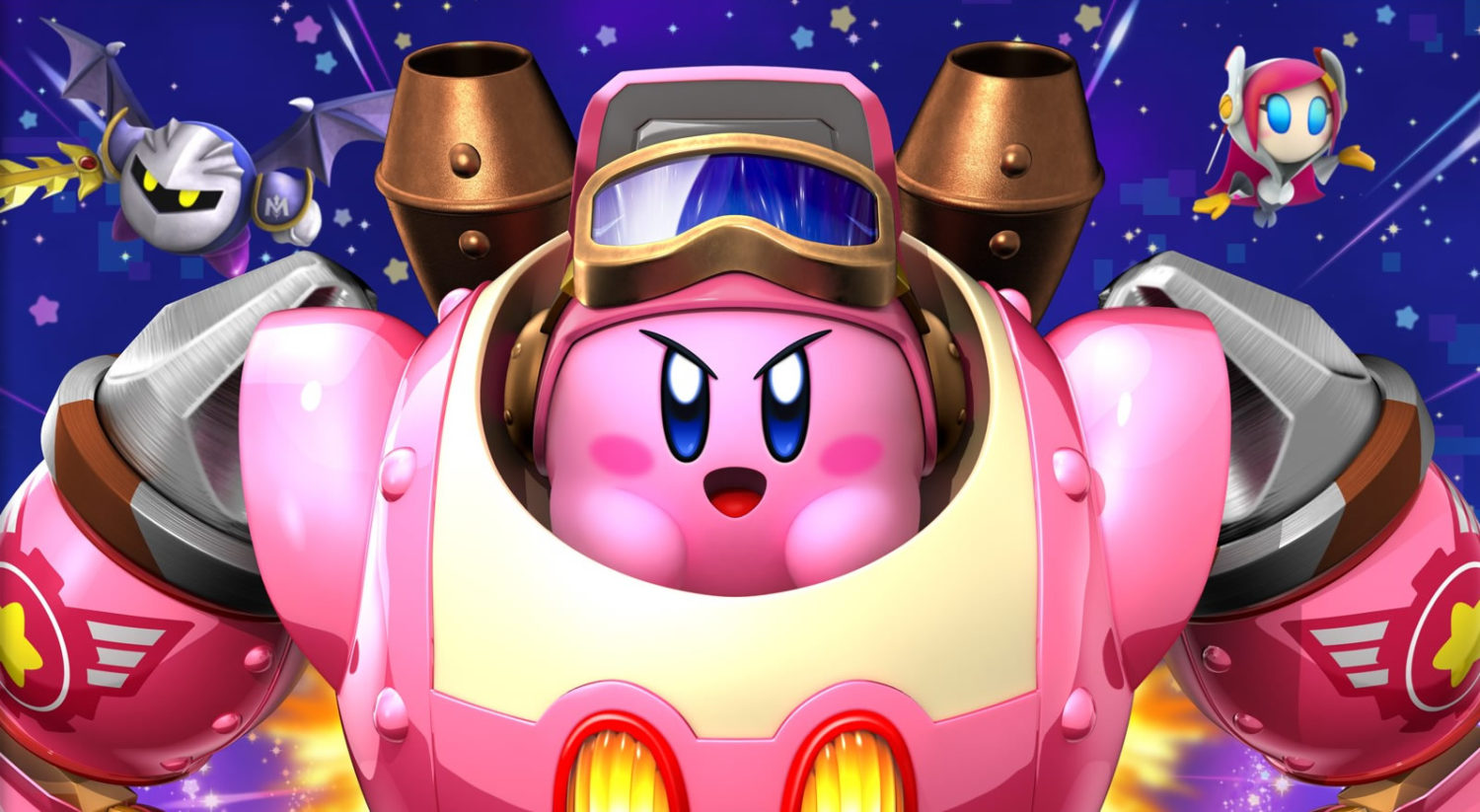 Kirby has been on several adventures over the last couple years.  Starting with Kirby Triple Deluxe for the 3DS in 2014, and then Kirby and the Canvas Curse in 2015, Kirby Planet Robobot is now the 3rd new Kirby adventure game in the last 2 years.  While some Nintendo franchises can go several years without mainline iterations, Nintendo has been giving the pink puff some love and you won’t find me complaining!  While Kirby and the Canvas Curse went a different direction with its claymation art style, Kirby Planet Robobot is back to the familiar formula established in Kirby Triple Deluxe with some unique twists.

Kirby Planet Robobot starts out with a giant space ship landing on the planet Pop Star.  The ship has five large legs each matching up with the five main points of the planet Pop Star, how convenient!  It’s up to Kirby to fend off a new set of invaders using some unique new copy abilities and new tech.  As the title of the game indicates, robots and technology play a big role in this latest Kirby game.  Early on, players encounter an enemy that uses a mechanized suit that Kirby can utilize for traversing levels.  Not only that, this new suit can even copy enemy abilities just like Kirby can in his puff ball form.  It’s important to note that this Robobot armor is locked within each particular level of the game.  Players cannot traverse the overworld in the armor nor can they start a level with the armor.  It’s strictly an ability that can be obtained at various points throughout the levels.  This isn’t a huge deal by any means but it does mean that the armor is limited to use in the levels and only for mini bosses in those levels.  Main world bosses appear in their own ‘levels’ and almost all of these bosses are strictly Kirby only match-ups sans robot suit.  Again, this isn’t a deal-breaker by any means but it was a little surprising since such a heavy emphasis is placed on using the armor throughout each level.  In some levels, Kirby will transform into a jet or car and most of the level is geared towards the armor from beginning to end.

For those who haven’t played Kirby Triple Deluxe on the 3DS, you need to play it!  The gameplay is almost identical in Planet Robobot save for the Robobot abilities.  Kirby can still suck in enemies, spit them out, copy their abilities, and fly effortlessly through the air.  The core gameplay is a standard Nintendo 2D platformer with lots of different background layers to take advantage of the stereoscopic 3D of the 3DS.  Players will be able to traverse various layers to find hidden rooms or collect stickers.  Stickers are collectable icons from all of the past Kirby games and can be used to customize the look of Kirby’s robot armor.  It’s a pretty cool addition and it doesn’t just feel like a pointless collectable that will just fill up slots in a menu somewhere.  Boss battles are where Planet Robobot’s gameplay really shine!  Despite not being able to use the Robobot for most battles, the bosses all had their unique challenge even if some bosses felt a little ‘recycled’ from previous encounters.  I don’t want to spoil anything for you guys, but there is a pretty special boss battle late in the game, so I’ll let you discover that for yourself.

Kirby Planet Robobot also features an all new mini-game accessible from the get-go called Team Kirby Clash.  It has some basic RPG elements to it and allows 4 players to assemble and take on various bosses.  Each character has a life bar like an RPG and it felt a lot like some of the StreetPass mini game RPGs.  The game can be played by yourself as well with an AI controlled character.  Also, Kirby 3D Rumble is another game mode that is easy to pick up and play.  All players need to do is collect medals and beat enemies through 3D-platforming based levels.  It’s a little different but also a lot of fun.  You’ll also find modes like The Arena for fighting through a gauntlet of the Story Mode’s bosses and more modes to unlock once you beat the game.  All in all, the amount of modes and multiplayer options means there is a lot to enjoy in this latest Kirby game.

Visually, the game is superb.  The stereoscopic 3D for instance is up there for some the best on the 3DS.  I would put it up there with Super Mario 3D Land in terms of utilizing the 3D well.  There are the occasional frame rate slowdowns when using the 3D slider, but for the most part it’s great.  I actually played the entire game with the 3D slider all the way up just to appreciate the great level design and elements that come popping out of the screen.  Seriously, some of the level design in this game is a treat for the eyes and a ton of fun to play!

Kirby Planet Robobot is an excellent game.  It really is.  Some people might say it has a little too much in common with Kirby Triple Deluxe but I would say that’s a good thing.  The levels and worlds are all new and most of the elements from Triple Deluxe have just been improved on in my opinion.

The Robobot really makes the game shine although I did feel it was a little under-utilized for boss battles.  In the end, Kirby Planet Robobot is another knock-out Kirby game with a lot of great content for fans of the series and newcomers alike.  It’s a definite must-own title for the 3DS.