If there’s one thing I’ve always appreciated about the Kirby series it’s that it has never been afraid of trying new things. Maybe this game is a fighting-style experience this time, maybe next game it’s a platforming game where you have to draw to move Kirby. Kirby games can go just about anywhere, and it’s fun to see where it can go. This trend continues with the newest Kirby game, Kirby’s Dream Buffet.

Kirby’s Dream Buffet is part Mario Party, part Fall Guys, with a dash of multiplayer chaos. A competitive, multiple obstacle course challenge filled with numerous mini-games to get back at other players or have luck take it all away. It’s a surprising combo you wouldn’t expect out of Kirby, yet one that works really well. There’s a lot of fun to be had, even if the game is an experience that ends up not being for everyone. 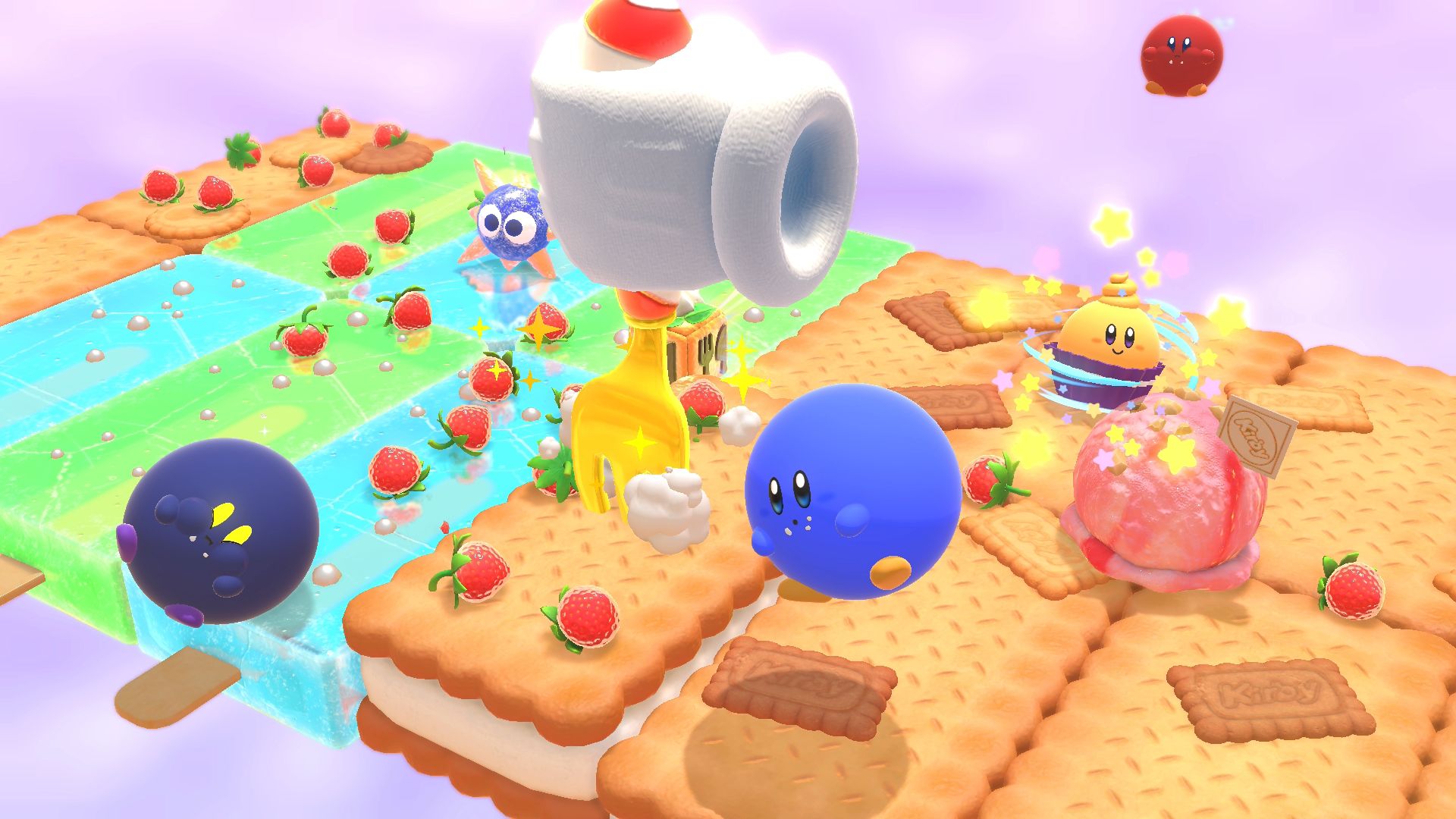 Something that immediately jumps out in Kirby’s Dream Buffet is how colorful and delightful the world is. With one glance, you’ve likely seen that it’s full of colorful desserts. Every stage takes place on one of many different treats, from cakes and cookies to jello-like creations. Every one of them looks great, popping with tons of details and colors. I thought seeing a few of the dessert stages would essentially show me everything the game had to offer from a stage-design standpoint. To my surprise, new courses stood out and were a delight visually. The developers clearly know their dessert treats well; they didn’t miss a single detail.

Besides the dessert stages, the main aspect of Kirby’s Dream Buffet is gameplay. In short, your goal is to finish a mini-game, stage, or full competition as the biggest Kirby. To be the biggest Kirby, you have to eat the most strawberries during each part of the game. Finding strawberries is the easy part; keeping them is a whole other story. Falling off stages, getting thrown off by competing players (using special abilities found on the stages), or running into hazards causes you to lose strawberries. It’s a simple concept to understand, but every match is a different beast to handle. This is because of who your competition is.

Kirby’s Dream Buffet can be played solo vs 3 CPU’s, locally with 3 friends, or online against anyone. Playing against the computer on your own is surprisingly fun. The computer, even on its easiest setting, is no slouch. They will absolutely come after you and they have no problem throwing you off the stages. Playing with friends or even online is where this game really shines. Most matches last no more than 5 minutes and it’s easy to get into a rhythm of fun playing against your friends or strangers. I should warn that people online have learned how to play this game quite well, so be prepared for a far tougher challenge if you play against random people online. Against friends or family, it’s an absolute blast that will lead to playful shouting and occasional ganging up on that one person in the lead. Not that I would ever do that… 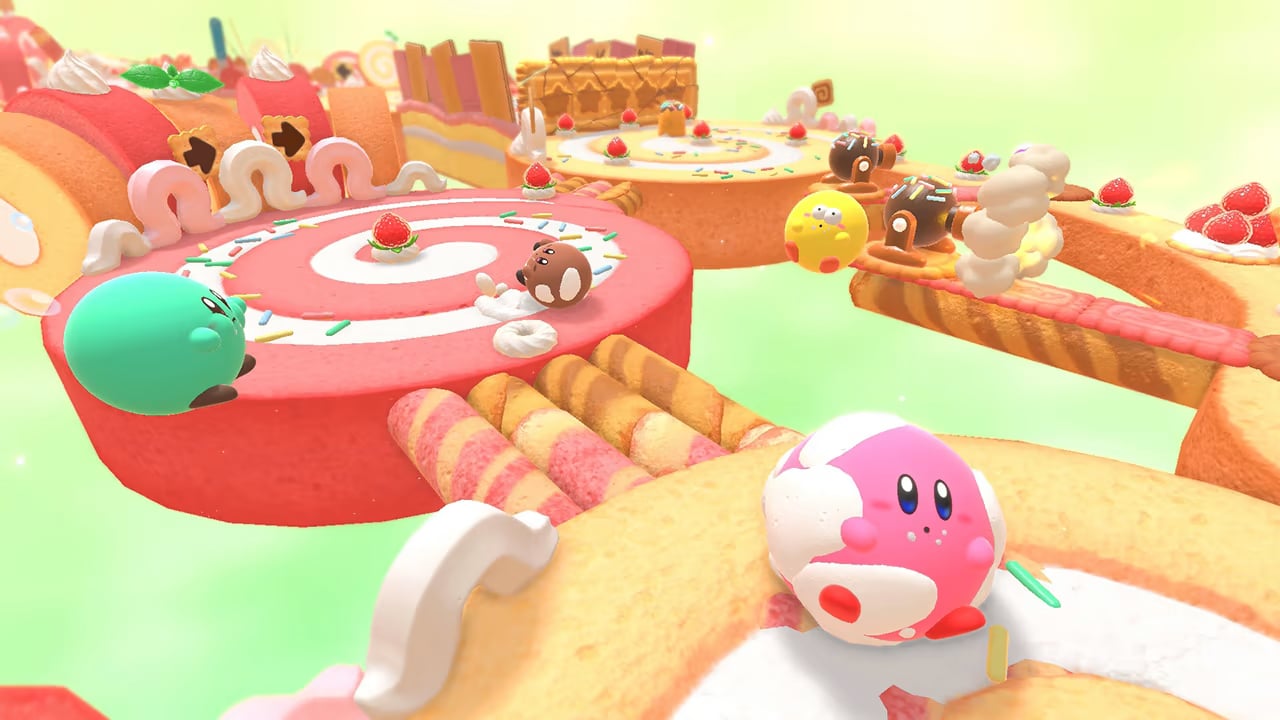 The other really nice aspect of Kirby’s Dream Buffet is the rewards. At the end of each match, you are rewarded for how many strawberries you managed to keep through the whole experience. Finishing in first place grants you bonus points, all of which increase your player level. At each level something new unlocks. This can be anything from new songs that will play on stages, new customizations for your Kirby, to even brand new mini-games and courses to play. There’s a lot to unlock and it’s a major reason to keep playing the game over and over. I’ve played Kirby’s Dream Buffet for many hours and I haven’t touched a fraction of the unlocks; so don’t worry about running out of new things to receive. Plus, if you’ve played previous Kirby games on Switch, you get bonus rewards right at the start. A little something for keeping up with Kirby.

That said, some may not love Kirby’s Dream Buffet because of its multiplayer. In fact, your enjoyment of this game will depend on how much you enjoy multiplayer games. Like I mentioned earlier, even the CPU on its easiest difficulty setting can be tough competition. I tried playing with the CPU on max difficulty and let’s just say I was completely destroyed. The same goes with online matches against random people. Some people clearly learned how to play the game right away and completely dominate the matches. Other online matches can be a bit frustrating when other random players team up against you. Yes, that’s part of the gameplay experience, but some people aren’t going to be amused by this. If you’re looking for a super-easy Kirby game or something to relax, unwind and play solo, Kirby’s Dream Buffet isn’t for you. It’s not super hard either, it’s just surprisingly more difficult than you might imagine. 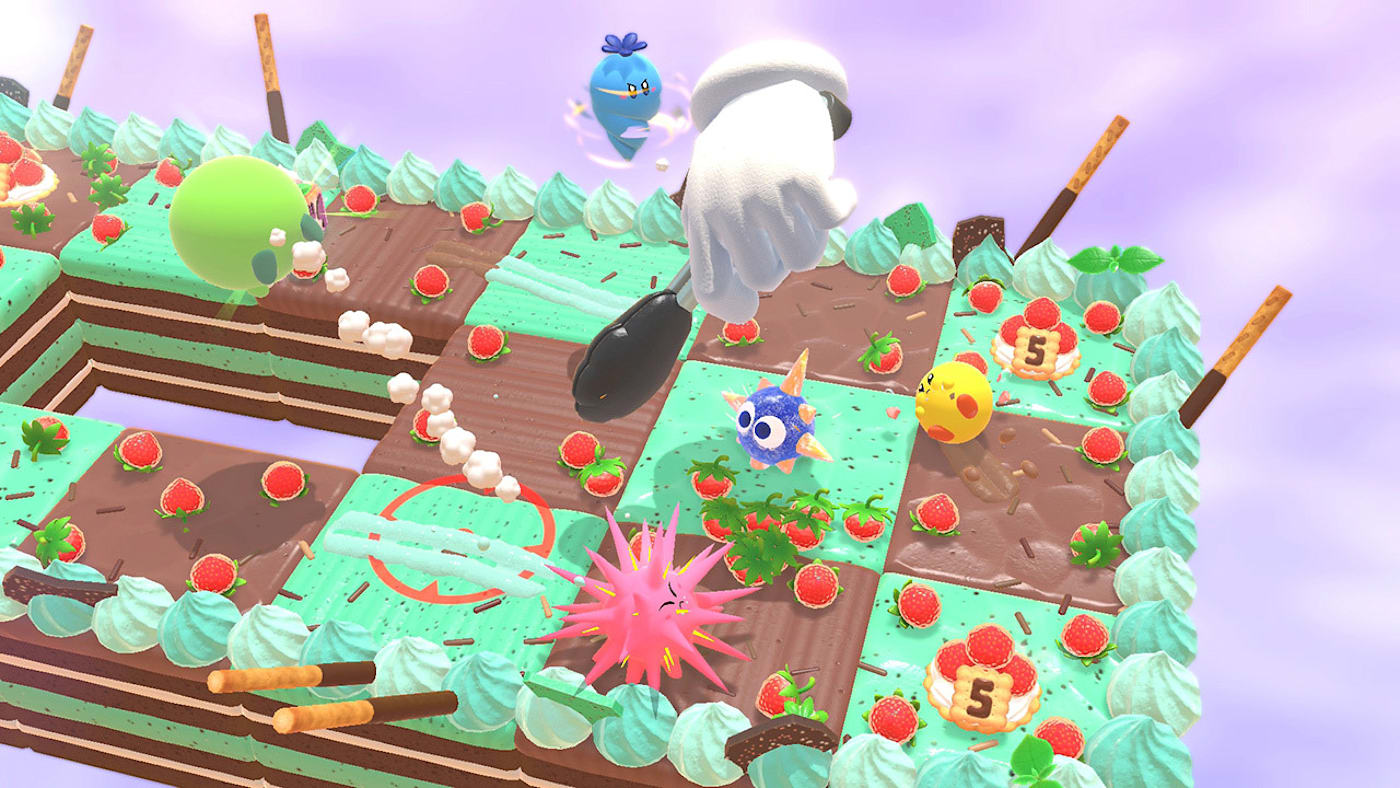 My only major issue with Kirby’s Dream Buffet is the mini-games. Much like Mario Party, not every mini-game hits the mark. Some are great, others fine, and a few are just terrible. One in particular that I didn’t enjoy is called Battle Royale. The point is to provide you one final chance to take away strawberries from the other players. You land on a small stage collecting power ups, which are used to push players off the stage. At the same time, you are trying to avoid being pushed off. Not only does this feel like it goes on way too long, but it also just isn’t fun. No one (you, the computer, or other players) really wins this mini-game; everyone loses strawberries, some more than others. In the end it just feels like pure luck if you didn’t lose the vast majority of your strawberries, which you rightfully earned earlier. It’s definitely one I would love to never play again.

So, should you play Kirby’s Dream Buffet? Absolutely. It does enough things right to be a great experience both solo or against friends and family. The super colorful and attractive dessert stages are a blast to play on and the main gameplay concept is easy to grasp but hard to master. There’s plenty of rewards to unlock , so don’t worry about running out of things to try to get. While not the easiest Kirby game you can play and a few mini-games completely missing the mark, Kirby’s Dream Buffet is an absolute delight. For $15, there’s no reason to miss out. Now if you’ll excuse me, I’ve got a few more matches to play before my Kirby can wear a cheeseburger hat.

Kirby’s Dream Buffet does enough things right to be a great experience both solo or against friends and family. The super colorful and attractive dessert stages are a blast to play on and the main gameplay concept is easy to grasp but hard to master. There’s plenty of rewards to unlock , so don’t worry about running out of things to try to get. While not the easiest Kirby game you can play and a few mini-games completely missing the mark, Kirby’s Dream Buffet is an absolute delight. For $15, there’s no reason to miss out.