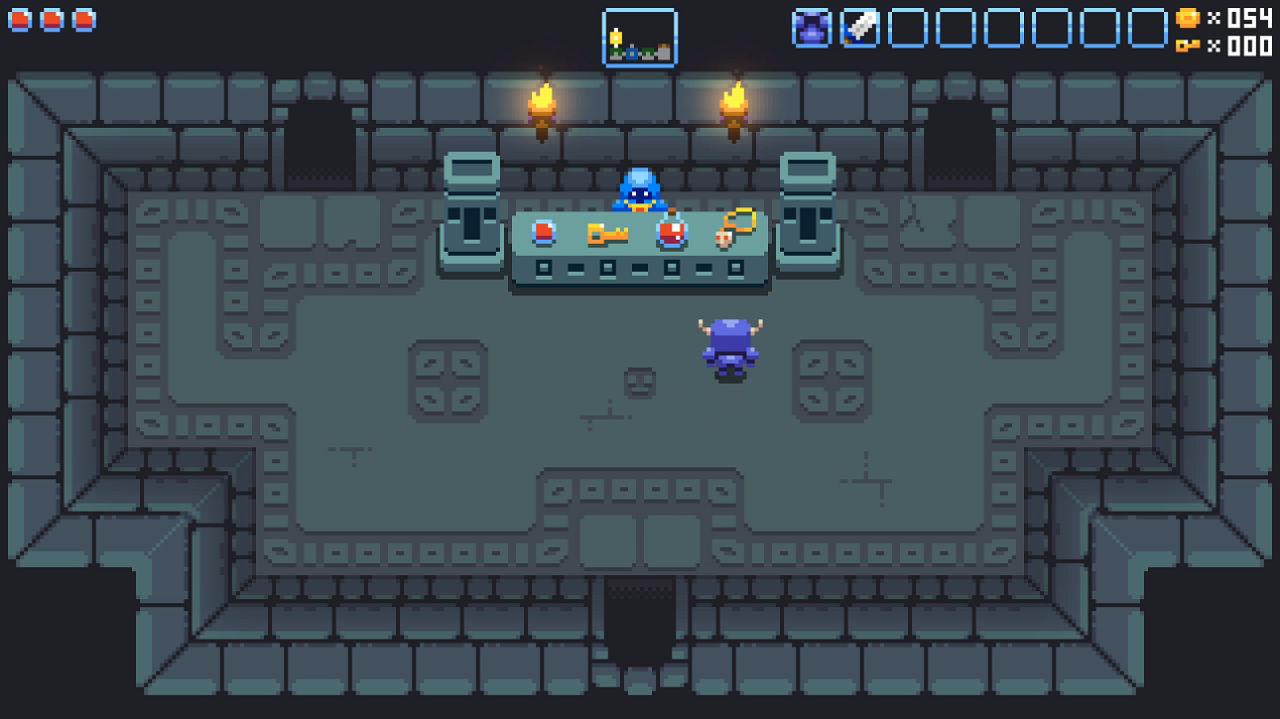 As a fan of early 2D Zelda Dungeons, Knightin’+ caught my eye. Beyond doubt, it draws inspiration from young Link’s adventures. Unfortunately, without an overworld to traverse, I found my eye eventually wandering towards other Nintendo Switch eShop games.

From the unfortunately named Muzt Die Studios, Knightin’+ offers a small adventure “full of dangers and treasure.” While polished enough, it simply is not very interesting. I’m sorry, I don’t know how else to say it. My initial fun didn’t last, as I found the gameplay quickly growing stale after the first dungeon. It doesn’t just stem from the lack of an to overworld to crisscross, either.

While “devious puzzles” are promised, what’s delivered here is a curious amount of the Sokoban variety. These work in moderation, but in Knightin’+ I found they became dull. No matter the puzzle, I didn’t find myself enjoying any of them all that much, even though they will make you pay attention.

The narrow focus means other areas had to be nailed. But besides the puzzles, enemies come up short. They can be tough to fight if trying to move diagonally while being pretty darn generic too. I get it, these dungeons are “In a quite generic fairy tale kingdom…” as part of the story, but it doesn’t mean I have to like it. However, I am grateful they don’t respawn unless you leave the floor. The coins they leave behind (which you can use for health and such) are automatically drawn to you after a moment, another touch I appreciate.

You will be leaving floors, though, as backtracking is involved. At one point, I needed to retraverse several floors just to buy a key. Again, I get that Knightin’+ is a smaller game, but that feels like definite padding. At least the pixel art looks pretty nice, employing several themes like pyramid and temple. Each has unique music too.

What it all boils down to is that Knightin’+ struggled to keep me engaged. The lack of an overworld of any type makes it ultimately forgettable. For $5.99, you’ll get a strictly average title.

What it all boils down to is that Knightin’+ struggled to keep me engaged. The lack of an overworld of any type makes it ultimately forgettable. For $5.99, you’ll get a strictly average title.