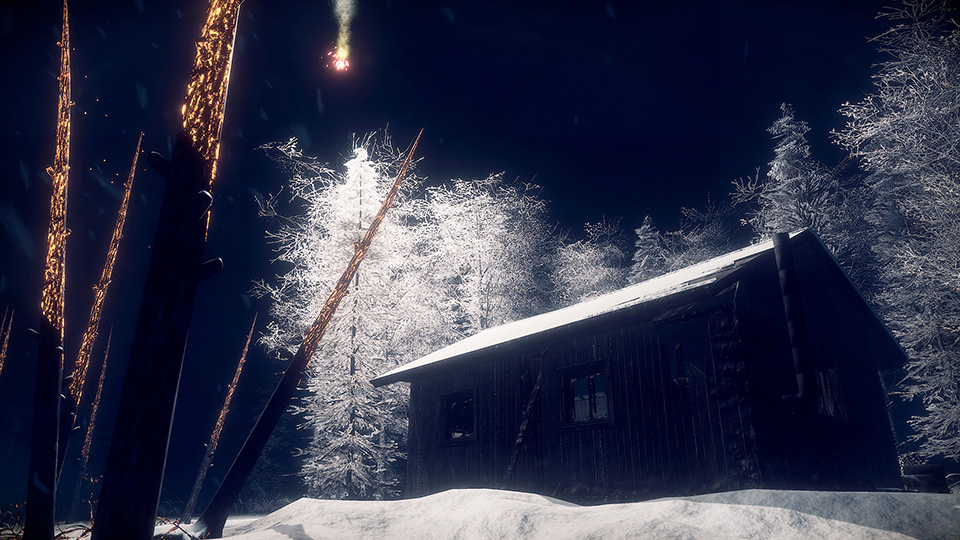 Kona is a game that’s best played alone. I know that counters Nintendo’s focus on playing with as many friends as you have Joycons, but playing alone makes this “walking sim” feel truer to the developer’s intentions. You should play Kona as if you were reading a book; brew up some coffee or hot chocolate, set aside a couple hours, and make sure you have plenty of room to swing your ax. 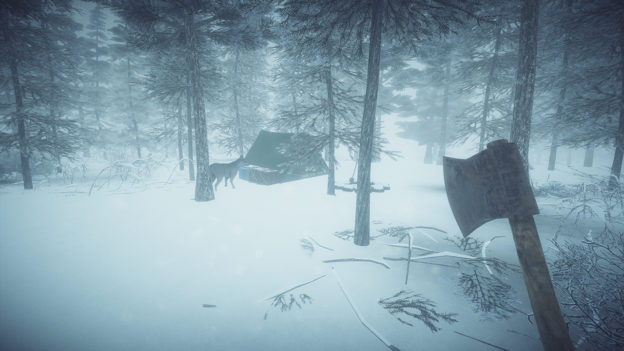 Kona—a mystery adventure developed by Parabole and published by Koch Media—is set in a wooded mining town in northern Quebec in the early 1970s. We see this landscape through the eyes of private investigator Carl Faubert, and our thoughts are fed to us by an unidentified narrator. This narrator sets the scenes, describes what we’re seeing, and tells us how Carl is reacting, creating a somewhat unsettling disconnection. The whole game feels like an out-of-body experience; we view it all in the first-person but learn what’s going on as if observing someone else.

Furthering the overall creepiness is the fact that Carl is seeing and experiencing things that shouldn’t be there. Having been summoned by a friend to investigate a case of vandalism, Carl crashes his car outside of town and is knocked unconscious. He awakens to find himself caught unprepared in a violent snowstorm. 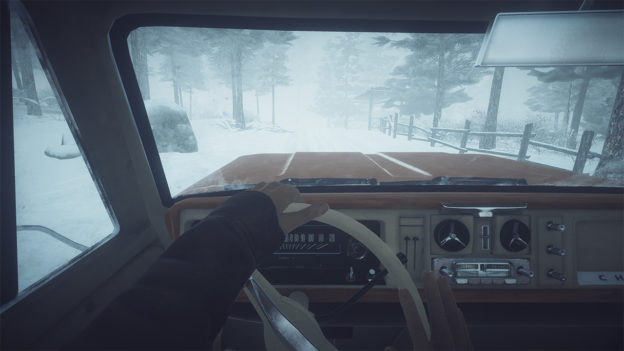 How long was he out? We don’t know. The driver of the other vehicle has abandoned the scene, but Carl’s truck thankfully still works and he’s eventually able to get to his friend’s store only to find him dead. But that’s not the most unsettling thing; he also finds these odd boulders of blue ice. Taking a photo of it with his Polaroid camera (the Polaroid gets a lot of use) reveals glowing tracks which he follows to find a man encapsulated in the ice, upright as if he’d been frozen instantly while running. Carl then has hallucinations (visions?) of spirit animals and ghostly figures moving about, providing clues as to what happened at that location. This becomes a recurring thing.

Surprisingly, the dead citizens and ghostly figures aren’t Carl’s major concern; staying warm is. The bitter cold is an important gameplay element, as you must start fires at houses, stores, and campsites to prevent yourself from freezing to death. Mental health is an issue, too, as the visions and events take a toll on Carl’s psyche. It’s never terribly difficult to stay warm and stable, however, as there are always nearby materials for a fire and some cigarettes to keep you sharp. Yes, it seems that in the ‘70s cigarettes were good for your health…at least in Canada. Your pickup truck allows you to store extra items, so it’s easy to keep the necessities stocked. The circular UI for your inventory is a bit awkward to use, but you do have the option to assign frequently used items to the D-pad.

This being an adventure game at heart, your inventory is also used for storing documents and photos as well. Important items are automatically recorded for later access, and you’ll be accessing them a lot. Because it’s just you and the narrator, the story is largely revealed through letters, notes and newspaper articles. These often contain clues for future puzzles and, more importantly, can help guide you to your next destination.

Kona does not force you to explore its environment on a linear path, however. You’re mostly free to move around as you see fit, with an old-school map always keeping track of your current location. 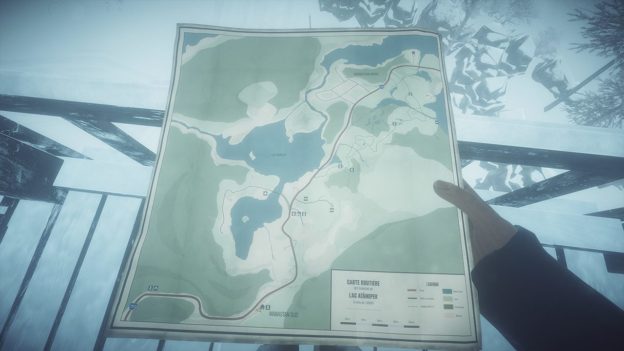 This freedom puts you fully in charge of your investigation, but it also means you could waste a lot of time just walking around. Your truck helps you get to specific locations quicker, but the driving mechanic gets old quickly and it’s easy to miss paths or things in the woods that should be explored. As such, I preferred to stay on foot when possible. This confines you to a specific area due to the elements, but the game doesn’t leave you without access to what you need to solve an area’s puzzles unless that puzzle is attached to the plot.

That plot, by the way, centers around the local residents involved in a larger story of political intrigue. Although we don’t meet these people, the game does a good job of bringing them to life through their journals and newspaper clippings. Of course, it’s hard to stay focused on that when you’re also trying to figure out why the town is deserted and why those still around are either dead or frozen in that bizarre blue ice. 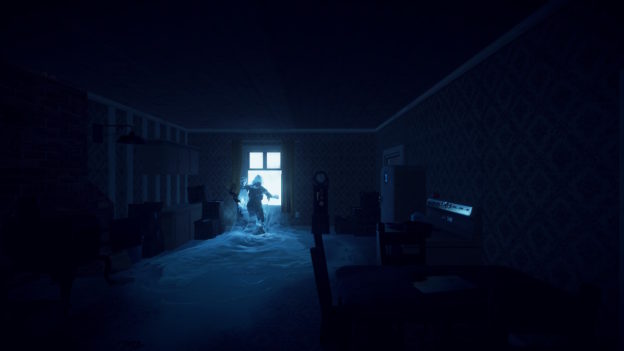 And just what is this beast about which so many people are writing? The mystery, the supernatural elements, and all that snow come together like a good season of Fargo.

Two things are obvious, then, from the moment you start Kona. First, there’s a lot more going on here than is readily apparent, both naturally and supernaturally. Second, aside from the animals and the ghosts of the past, you are alone. This is why I suggest you play Kona by yourself. The game works hard to create a sense of isolation, and that’s much more effective if you’re not surrounded by people helping you solve the puzzles or arguing against using a crowbar to fend off wolves when you have a gun in your possession (although that it is very sound advice).

Unfortunately, a few things do prevent Kona from becoming a completely immersive experience. Aside from the awkward UI and need to drive from location to location you’ll often be hit with excessive load times when crossing from one area to the next. In addition, whereas the settings are effectively bleak, the Switch version lacks the detail a game like this requires to keep you moving forward. When roaming the woods, the sameness of it all often had me believing I was wasting my time moving forward. I therefore surely missed some of the game’s bonus finds.

And finally, the narrator and Carl himself are a little too nonchalant about the whole affair. It’s hard to get wrapped up in a story when the main character reacts the same to finding a dead body as he does to finding a roll of duct tape.

Those complaints aside, Kona is an intriguing game that’s worth the relatively short amount of time you’ll put into it. It’s just quiet enough to catch you with some well-timed jump scares, and just isolated enough to make you seek a personal connection with the people in its story. To reiterate the point I made at the top of the review, finishing the game is akin to completing a good book. Kona may be best experienced alone, but you’ll find yourself recommending it to others so you can discuss it with them later.

There’s a lot more going on in this “walking sim” than is apparent at the start, both naturally and supernaturally. This contradicts the fact that, aside from the animals and the ghosts of the past, you are alone. Kona works hard to create a sense of isolation, making the experience much more effective if you’re not surrounded by people helping you solve the puzzles or arguing against using a crowbar to fend off wolves when you have a gun in your possession (although that it is very sound advice).