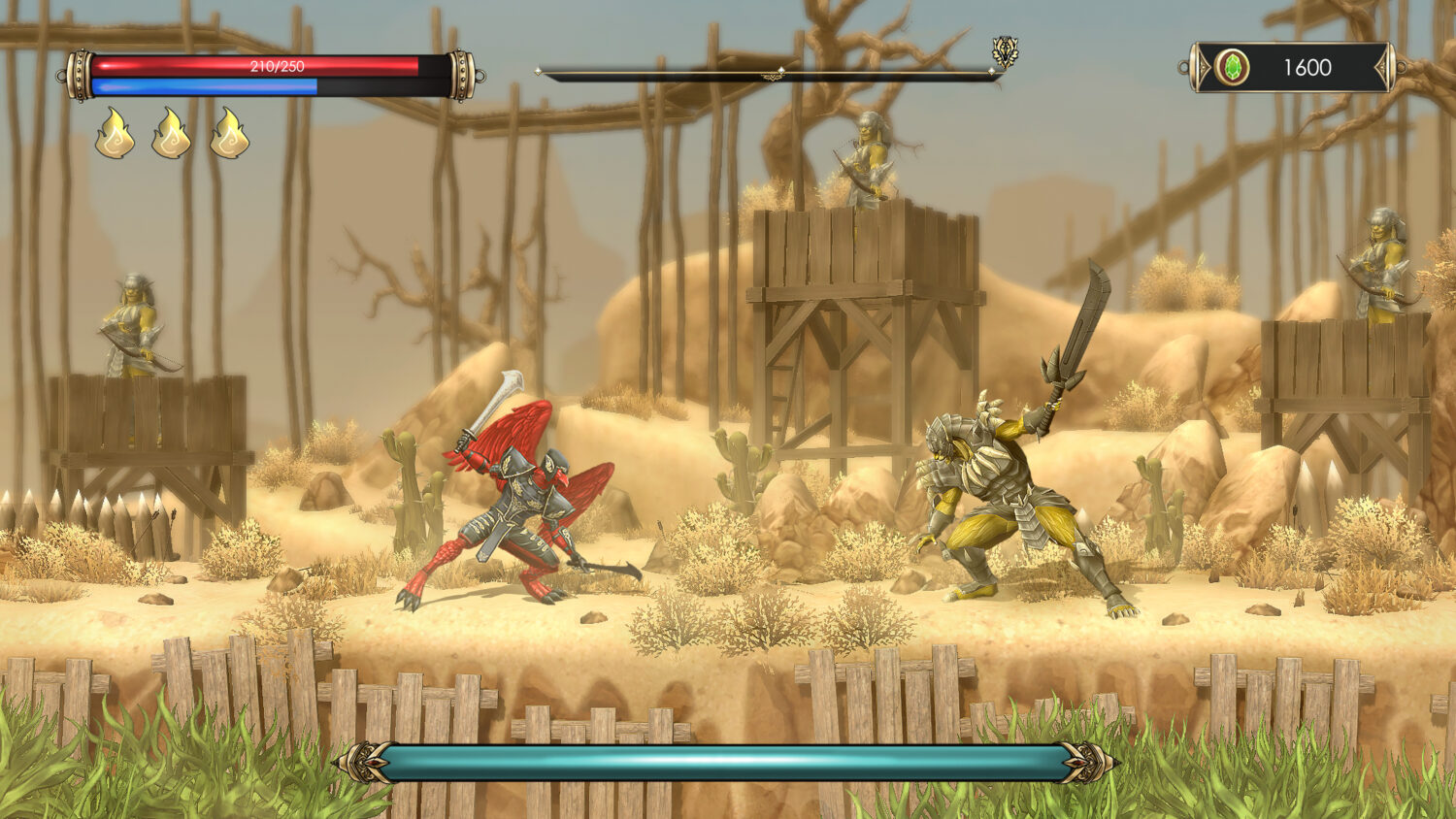 Spread your wings and hack away.

Krut: The Mythic Wings is an action platformer based on ​​the 2018 animated feature-length film, “Krut: The Himmaphan Warriors” from RSU Animation out of Thailand. I haven’t seen the movie, but I understand this game follows the movie’s story of a Garuda warrior named Vera. After the Ogre army invades Garuda and seizes the capital, the wounded Vera is presented with the Mythic Wings, an artifact that could allow him to single-handedly reclaim his homeland. 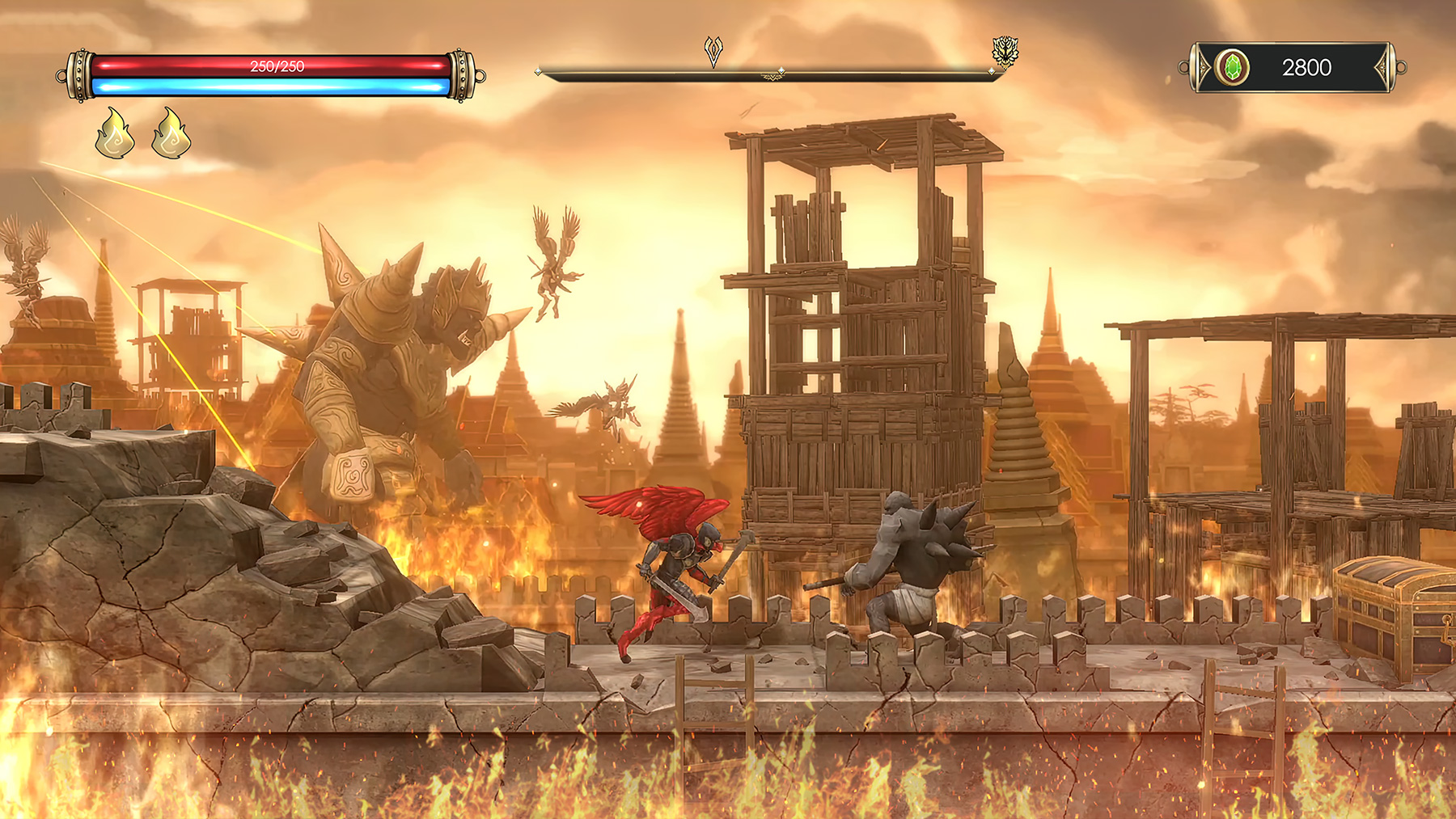 What follows is six levels of brutal hack-and-slash action and a whole lot of grinding. Each level consists of a mini-boss at the halfway point, followed by the main boss at the end. Don’t expect to reach either in your first attempt. Or second. Or tenth.

A hasty tutorial made it seem Krut’s action would be simple—light attack, heavy attack, dodge, special movie, on your way. Then, the first enemy I encountered left my health at about 10% before I was able to properly time my attacks and dodges so I could take it down. 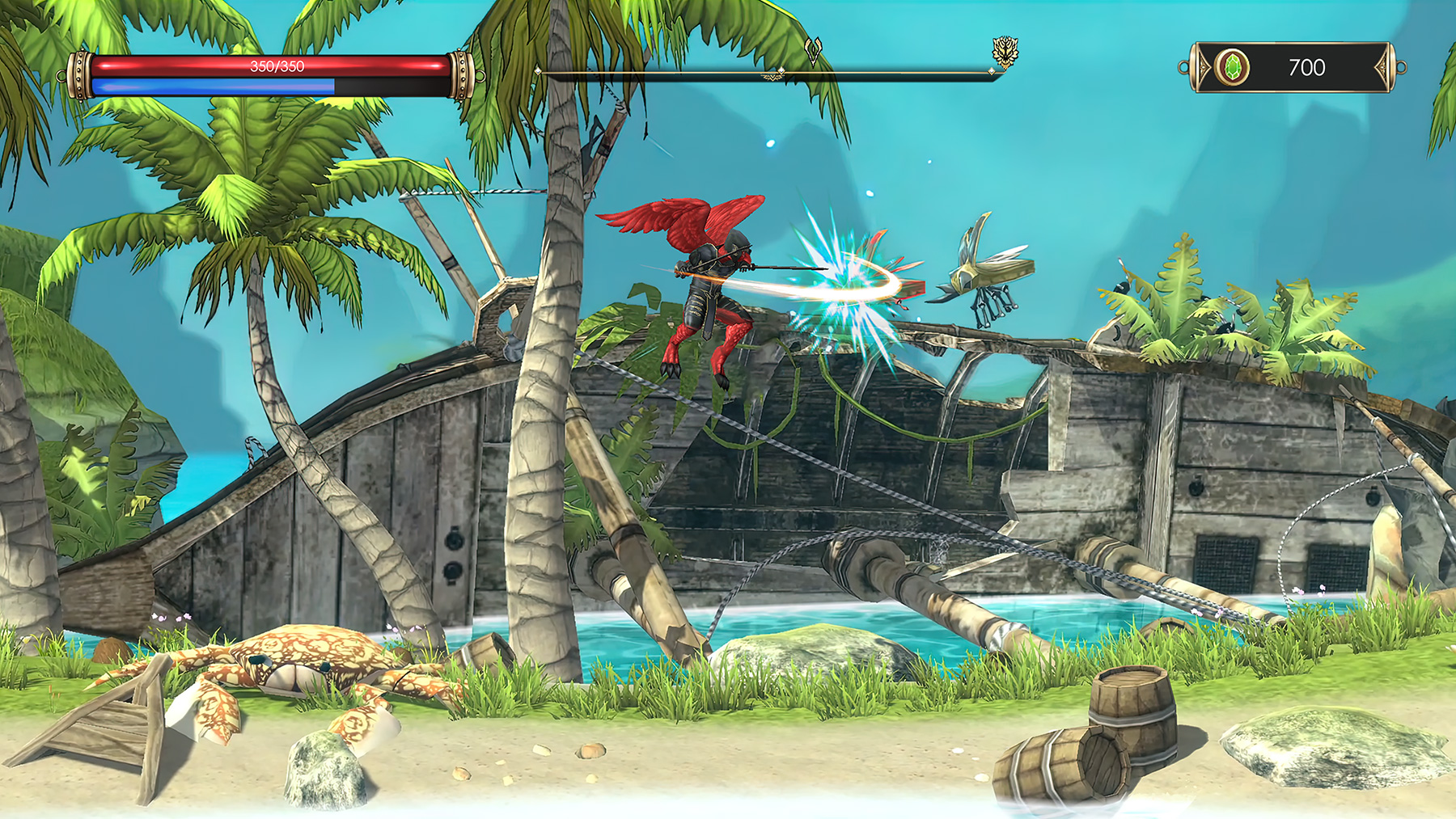 There are no warm-up enemies, just an onslaught of combatants that will wipe you out quickly if you haven’t mastered their attack patterns and weaknesses. Or, if you haven’t upgraded your gear and abilities.

It’s a familiar leveling-up system that’s bogged down by the need to purchase checkpoints with the same currency you use to purchase upgrades. In other words, you likely won’t have a lot of money for improvements after buying your way into a boss battle, making it very difficult to win. And when you run out of lives, it’s back to the beginning of the level with those checkpoints locked once again.

The tedium of all this back-and-forth is exacerbated by combat that never really evolves. The enemies get tougher, sure, but Vera’s moveset doesn’t grow to match their abilities. Rather, your strength is based on your upgrades, so advancing is more about doing increased damage with each blow than about learning more powerful attacks. The game is almost roguelike in that regard, forcing you back to the beginning of a level over and over again until you’re tough enough to efficiently damage the spongy enemies. 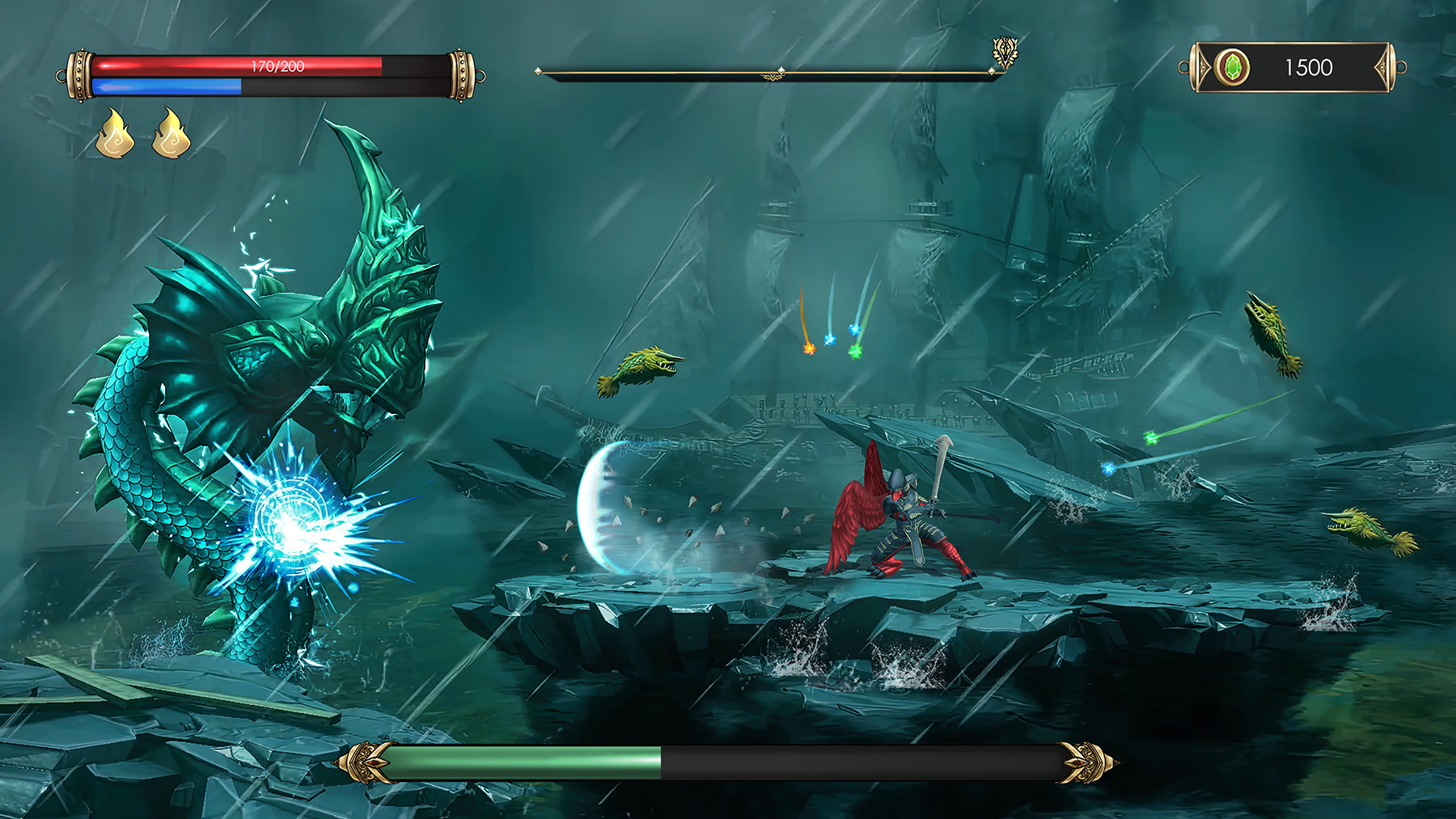 Of course, there’s a thrill to finally beating the bosses and advancing past a level, but the time it takes to get there isn’t a whole lot of fun. The difficult platforming of the later stages exacerbates the frustration. Death by falling into a pool of acid is the last thing you’ll want when you’re working your way up to the same mini-boss for the sixth time.

Krut: The Mythic Wings does have two things going for it. First, the graphics are really nice. This game serves as my introduction to Thai mythology, and it makes a wonderful first impression. As difficult as the enemies are to fight, they’re very nice to look at, and I enjoyed that most seem like mythical extensions of real animals. 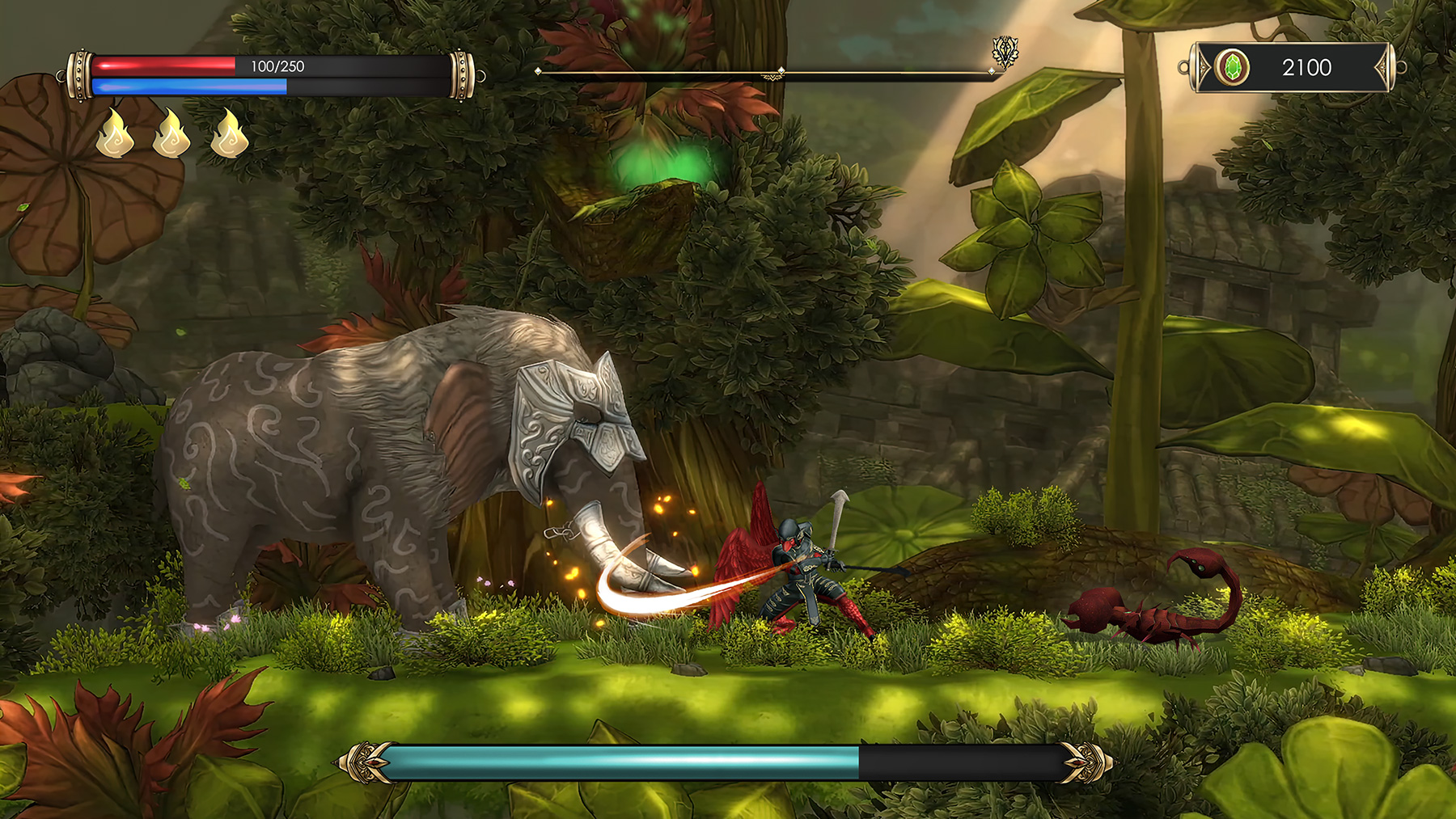 This is a gorgeous world to repeatedly die in, and discovering what’s ahead visually is really the main incentive to advance.

Second, the game is short and priced accordingly. With only six levels, taking 60 to 90 minutes per level means you’ll have completed Krut in under 10 hours if you’re able to stick with it. That’s about a dollar an hour, which is fair.

It’s unfortunate, then, that so much of that time is a slog. I really got the feeling the developers ramped up the difficulty to prolong the game time, making even the Easy mode a chore to get through. If you’re seeking a heavy challenge, you may not mind Krut: The Mythic Wings. But if frustration and repetition are not your thing, there’s no shortage of friendlier, more diverse alternatives.

Krut: The Mythic Wings is a very pretty but brutally difficult action platformer based on Thai mythology. The game can be completed in under 10 hours, but the bulk of that time will be spent tediously grinding for better gear to advance past even the common enemies. For the hard-core gamers only.