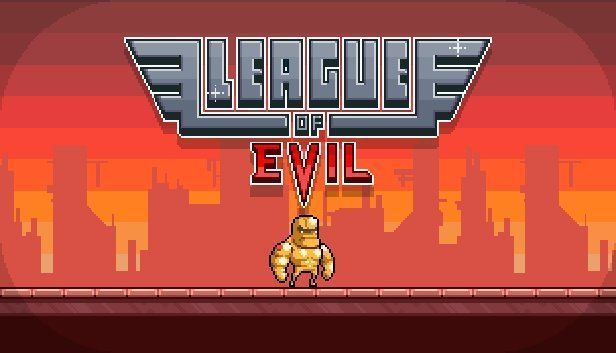 A genre that seems to be enjoying its fair share of releases lately is that of the retro-styled platformer. League of Evil falls squarely into this category, combining old-school looks with running, jumping and collecting, while avoiding death at every turn. So how does it compare to others in this field?

Let’s start with the most important part: the platforming. This game delivers some solid and tough gameplay, ramping up the difficulty fairly quickly. This difficulty can also be controlled to some degree, depending on how dedicated you are. There’s a star rating for each level, as well as a single collectible in the form of a briefcase. You can skip the briefcase and be satisfied with one-star ratings, or you can retry for glory, and more punishment. 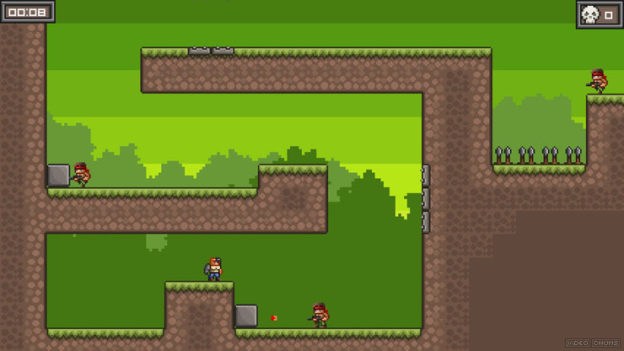 A relatively simple level layout. It looks nice, but a little flat.

The setup is simple, as are most elements of this game. You control a cyborg superhero who must stop the League of Evil. For some reason, each level’s exit is marked by a stationary, unarmed scientist, who you must punch to complete the level. Getting to the scientist is the challenge, since you’ll be jumping and dashing across moving platforms, spikes and laser beams, and avoiding armed guards, to get to the goal.

Interestingly, your character doesn’t have any weapons, though you can punch your way past any humanoid enemies. You’ll also be able to perform some nifty acrobatics thanks to the double jump technique. You can even wall-kick your way up between narrow walls, à la Mario. The controls are generally responsive, though I did find my double jump didn’t always respond to the second tap on the A button, which caused some frustration.

New enemies and environments are introduced but the overall format varies little. It’s solid, consistent, but also a little on the monotonous side. This goes for the game’s overall look too. The clean, sharp lines combined with simple backgrounds give it a crisp, retro look, but it feels a little empty and flat overall – there’s not a lot of personality in the game. This is true of the story too. There’s a very short intro before each of the game’s chapters, but it’s basic and uninspiring. 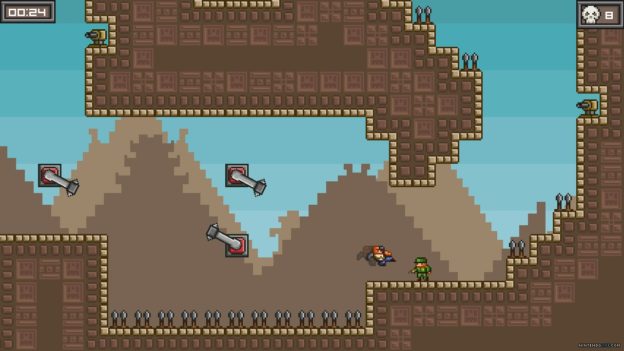 The game’s story mode is divided into four chapters, though each has a different number of levels for some reason. The themes vary not only between chapters, but within, so that on level 35 in chapter one, you’re seeing a new setting or look. It’s not a big deal, but I’d have chosen to split the levels up evenly, with similar themes. Otherwise, what’s the point of even having chapters? Maybe I’m just a little OCD.

One unique element of League of Evil is the level creation mode, where you can create your own stages and share them with the world, or download other creations to enjoy even more content. It’s fairly easy to create your own stages, once you work out how – there’s little in the way of a tutorial here. You can download stages singularly or in packages, either by searching or using the top picks for the week or month. One annoying feature is that, even though you have to go into the level creation menu to download stages, these are then added to your play menu as another chapter – this is not immediately obvious after downloading! I feel that the user experience could be improved in a few areas like this. 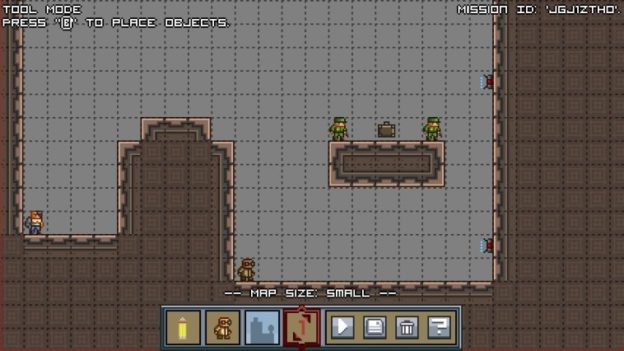 This is the level-creation tool. Simple but effective.

Overall, League of Evil is a fun, tough, yet simple platformer. There are 140 well-designed levels, which is plenty of content to keep most players busy for several hours. Throw in the level creation tool and you have practically limitless user-generated content available. The simple graphics and story detract from the game’s overall personality, but the solid platforming mechanics mean it’s still enjoyable, and is recommended for platforming fans needing a fix before the next retro-style game hits the Switch.

League of Evil is a fun, tough, yet simple platformer, with plenty of content to keep most players busy for several hours. The level creation tool adds practically limitless user-generated content. The simple graphics and story detract from the game’s overall personality, but the solid platforming mechanics mean it’s still enjoyable, and is recommended for platforming fans needing a fix before the next retro-style game hits the Switch.