It’s finally here! While it may not be the big game we were all waiting for (*cough* Zelda Wii U *cough*) Tri Force Heroes is definitely a good game to suffice our heroic hunger until the next installment. This adventure takes place in the land of Hytopia. The people who inhabit it are obsessed with clothing and fashion in general. Needless to say, what you wear gives you a certain social status. It’s an odd premise for a Zelda game. I’ve played almost every title in the series and I can tell you, its definitely a different experience than we’re used to.

Usually you’re tasked with saving princess Zelda from the clutches of a monster bent on world domination. This time around the main enemy is an evil witch who comes from the outskirts of Hytopia, a dangerous place called the Drablands. She is so jealous of the Hytopian Princess’ beauty that she casts an evil spell on her. Covering her in a hideous, irremovable, brown suit. The Princess is so embarrassed that she locks herself away, not wanting to be seen by anyone. This sends the towns people into a frenzy. Everyone is scared to dress in their normally “amazing” clothes because the evil witch might curse them too! 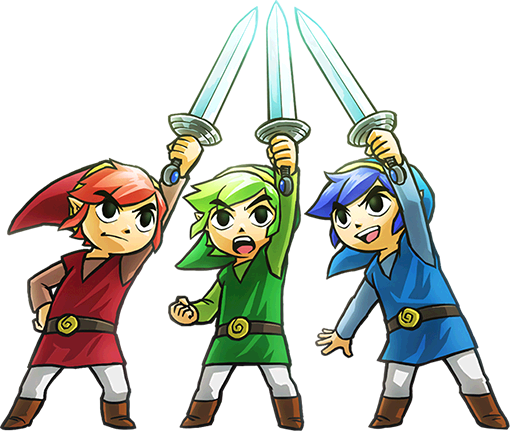 Honestly the story does sound a bit ridiculous. I mean, come on? Is this really a Legend of Zelda game we’re playing here? But trust me, give it a chance because it’s actually quite awesome. When you start a new file you’re shown a cut scene detailing the main plot of the game (which is really neat looking with the 3D effects on). After that it cuts to Link reading a help wanted sign. Ironically enough, the job is asking for a “Hero, with pointy ears, awesome sideburns, and hair that’s parted to the side”. I thought it was pretty funny. Before embarking on adventure, you must first prove yourself worthy of the job and receive the Hero’s tunic from Madam Couture. Hytopia’s most skilled seamstress (but we’ll get to her a bit later).

Another big change in Tri Force Heroes is the lack of exploration. While I didn’t find this too upsetting I know there’s people out there who will. You wont be doing the normal horse back expeditions or field trekking this time. Instead Hytopia is used as a sort of a home base or hub. You can checkout the towns few local shops, like Photobro (used for miiverse posting), Madame Coutures costume shop, and ‘Daily Riches’ a treasure chest mini game. But the main attraction here is the Castle. Going here gives you access to the Drablands and a few different ways to play the main game. Upon entering you’re given a brief explanation of what you can do and the numerous ways to play. When you play the main story you’re given the choice of which area you would like to explore, like a level selection screen. After choosing your level you then choose your outfit. This is where the game gets interesting.

Costumes are the bread and butter of Tri Force Heroes. Each time you clear an area, you get a random material that you can use to create tons of different outfits for our hero to wear. Each one has its own special ability or benefit. Once you have enough materials (and rupees) Madame Couture will create your new custom duds. You can go back and revisit areas you’ve already cleared if a specific material is needed. Or buy it from the local vendor, but he’s a little pricy. You have to work pretty hard to get some of the rarer costumes, but its worth it. I was excited when I finally had everything I needed and could go get Link a fresh new fit. Most of the costumes are pretty whacky. Its especially weird seeing Link in a dress but hey, whatever floats his boat. 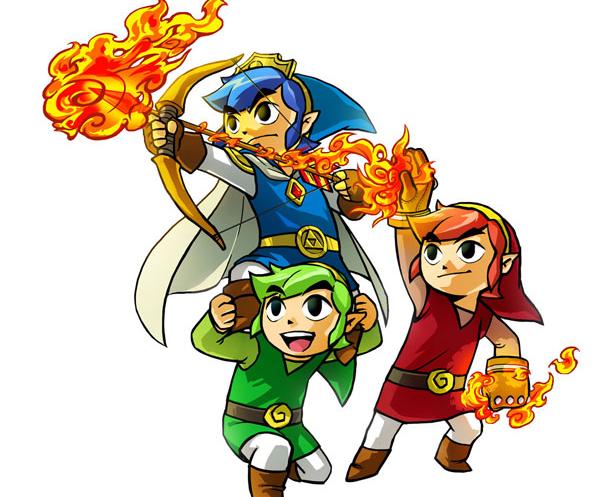 Tri Force Heroes is supposed to be a fun multiplayer experience, and it is! You can choose to play online with 2 friends or 2 random people around the world. You can also play locally or use the download play option which is pretty cool if none of you’re friends own the game. I recommend playing with friends. as some of the random people I played with couldn’t seem to figure out what the heck they were suppose to be doing. Everyone has their role and teamwork is essential. Upon starting a new area each hero will get an item (bow, water rod, bombs, etc) that is needed to progress. it’ll be yours to use until you leave that area. Each time you use that item is will cost you some magic. All three heroes share the same heart and magic gauge so you have to be resourceful. On the touch screen you will find a few Link emojis that you can post for the other players to see. Its a pretty helpful feature. Plus its fun to cheer your friends on, or say sorry for accidentally launching someone off of a cliff.

There is also a new totem ability which is pretty nifty. By stacking 2 or 3 Links on top of each other they’re able to reach higher areas, hit a bosses weak point or activate a switch that’s in a hard to reach spot. The Link on the bottom of the totem will guide you where you need to go. The Link in the middle can launch the one above him onto platforms or higher ground. Last but not least the Link on top can be used to fire weapons or slash with the sword. While playing online is really fun, sometimes it can get a little frustrating. Luckily you also have the choice to play by yourself, which is what I preferred a lot of the time. A solo adventure is the same as multiplayer (gameplay wise), but it goes at a much more comfortable pace. So its nice to have the option.

When playing alone, the blue and red Links are called dopples. They’re lifeless statues that Link can switch between during his adventure. For example Link can pickup the red dopple, throw it onto an otherwise unreachable ledge, then switch to the red dopple (by tapping a button on the touch screen) and viola! You’re there! Also dopples are immune to damage while not in use, which is helpful if you’re in a bind. There are tons of different ways to utilize your team in order to get where you need to go, the fun is figuring it out. There are also some pretty epic boss battles. Sometimes you have to switch between dopples really fast for a sneak attack, or create a totem to hit a weak point at the right time. I will say that I preferred multiplayer during some of these bosses as a few were pretty difficult. 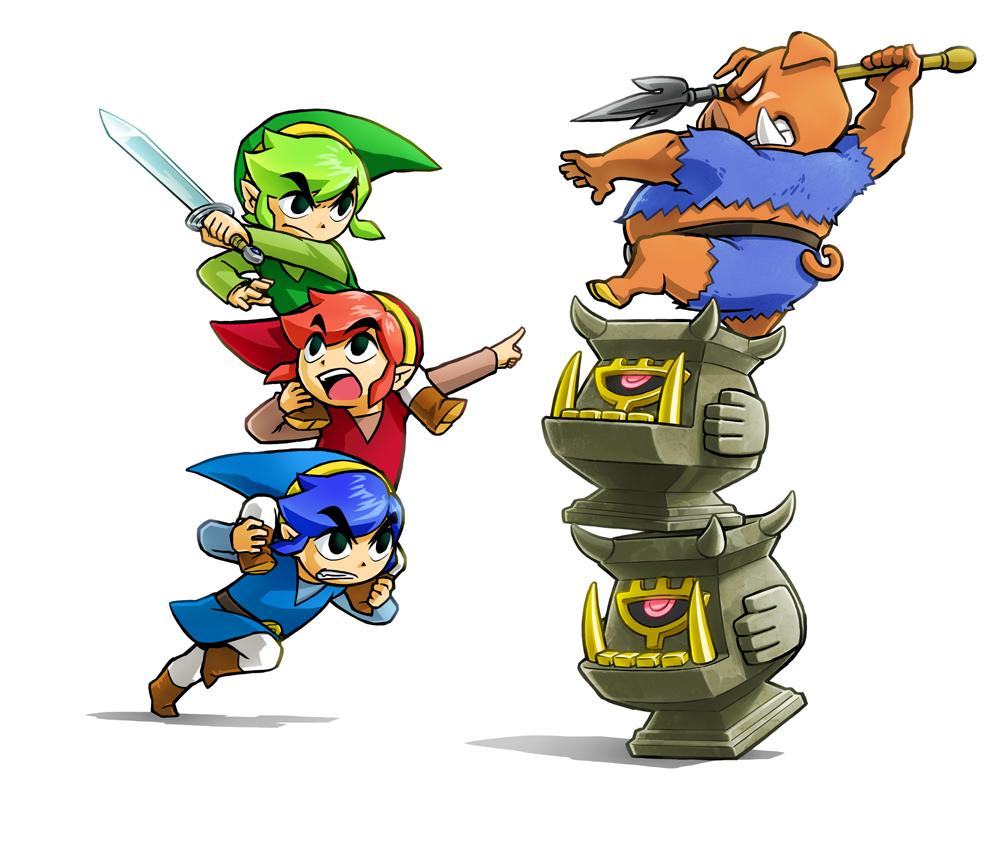 The controls are all pretty simple and easy to use. The control stick moves Link around, B is attack and L/R are the dash buttons. The look and feel is really similar to ‘A Link Between Worlds’, in fact almost identical. Which I wouldn’t say is a bad thing. Then there’s always the awesome soundtrack that accompanies every Zelda game. Tri Force Hero’s gives you plenty of new and classic tunes to enjoy while playing. There’s also a good amount of replayability. Each area in the main story has challenges that you can play for rewards. One challenge for example, cuts the amount of your teams heart gauges in half making your quest a bit more difficult. There are 8 different areas in the game. Each area has 4 levels and each level has 4 different challenges (unlocked when you complete all levels in the area). So it will take you a while to complete all of them unless you’re some sort of robot. If you’re feeling frisky, try out Coliseum mode. Here you can battle with 2 other people, whoever losses the least amount of hearts in the end, wins! 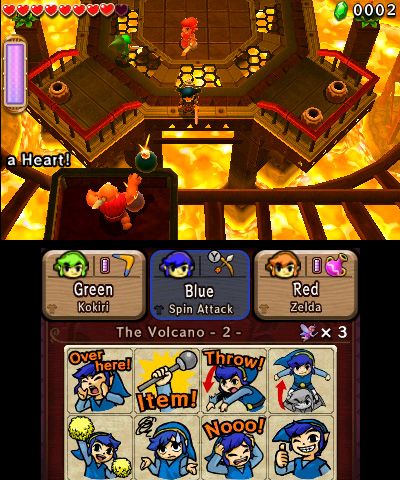 While the pros do weigh out the cons there are a few things that we could use to liven up our gameplay experience. Mainly in Hytopia, since there isn’t much to do there. It would be nice to have another shop in town or another mini game, but that’s really my only complaint. Weird ‘fashion crisis’ story aside, Tri Force Heroes is a must play if youre a Legend of Zelda fan. I found it challenging and most of all FUN! While it may not seem like a huge Zelda game its actually quite a big adventure, just a compact one, and I’m ok with that. So change into your most stylish outfit and prepare for a crazy ,fun, challenging experience that is sure to have you coming back for more! 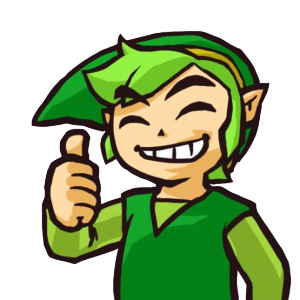 I had way more fun with Tri Force Heroes than I expected. Even though it’s not your typical Zelda adventure its a fun new experience that feels fresh, unique and a little addicting. I highly recommend checking it out!