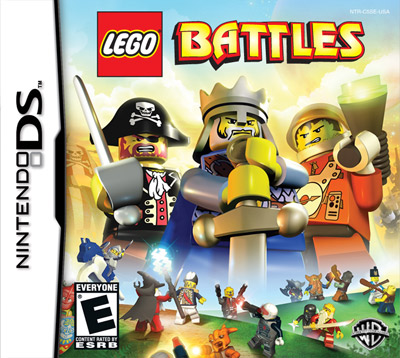 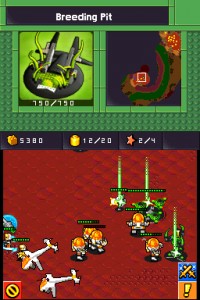 When you first begin your journey in Lego Battles’ single-player mode, you’ll have the option of choosing either ‘Story’ or ‘Free Play’.  Free Play is a nice way to get right into the game and start playing, but you miss the tutorials that are featured in the Story mode, which help out a lot!  In Story mode, there are 6 campaigns spanning different universes in the Lego series, I don’t want to spoil what all of them are, but the main three that are featured in the game are Space, Castle, and Pirates.  If you’re a long-time fan of Legos as I was growing up, you’ll quickly recognize some of the units and designs for the in-game characters.  That being said, this is a completely new game with new characters and storylines to the Lego universe. 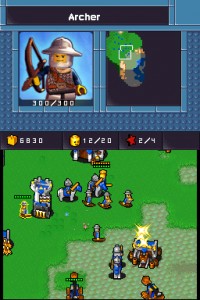 You’ll encounter various missions as you play through the game.  Some missions will require you to explore a level to find a special item, or to defend your base against attack.  You’ll also build your way up to full-scale RTS gameplay where you’ll have to build faster than your opponent and either capture or destroy the enemy base.  Each story focuses around a different main character in the Lego themes, also known as ‘Heroes’.  These heroes have better abilities than the normal units and can even cast spells, similar to hero units in other RTS games.  This adds a really cool dynamic to the game and it makes for some great combat.  Lego Battles is all about replicating the amazing speed and gameplay of RTS games on the go, and it delivers!

The gameplay is very similar to other RTS games, but with that unique/fun Lego twist.  You’ll have a main base, a barracks, farms (for food/supplies for units), special barracks for air units, and many more.  There are also 30 different land, sea, and air units to unlock and use throughout the game!  The game is played using the stylus/touch screen to control your units on screen.  Touch different units to tell them to attack, defend, wait, or repair other units.  Use the D-pad to control the view of the battlefield on screen.  You can also drag around up to 9 units on screen to put them into a group.  You’ll also find standard RTS gameplay mechanics such as a unit limit to supply ratio, minerals (trees for the castle theme), and fast-paced gameplay. 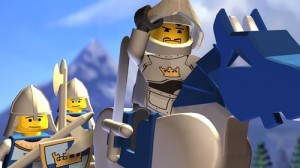 Lego Battles utilizes the touch screen for the on-screen action while the top screen keeps track of where you are on the map as well as gives details on units or buildings that are selected in the bottom screen.  The graphics for the game are really good for the game and don’t try to do too much.  The game runs very smooth and you’ll find that graphics are lacking in the least.  The game features a pseudo 2.5D perspective while some units are full 3D characters on screen.  And between each mission, you’ll see complete 3D rendered cutscenes that really add to the storytelling for the game. 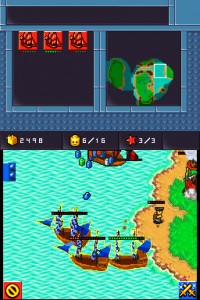 Lego Battles also features a local wireless multiplayer mode to play with friends on 30 different multiplayer maps.  It’s still the same fast-paced gameplay of the single player only now you can compete with your friends.  There isn’t any map-editing or online options, but there’s plenty of content available.  You can even use custom units that you have unlocked in the Story Mode in multiplayer battles, so there’s a lot of variety.

There’s already a lot to Lego Battles from the single player campaigns to the multiplayer, but you’ve only scratched the surface.  You’ll be kept pretty busy trying to unlock all the characters in the game, all the concept art, maps, and even a whole slew of achievements!  And for $29.99, Lego Battles packs quite a lot in for a nice price.

Whether you’re a veteran RTS player or new to the genre, you’ll love playing Lego Battles.  It has a gradual learning curve, but still offers quite a challenge in the later levels/campaigns.  The Lego franchise has been quite successful, and its first venture into the RTS genre is a definite success!  If you’d like to buy the game, check out the link below.