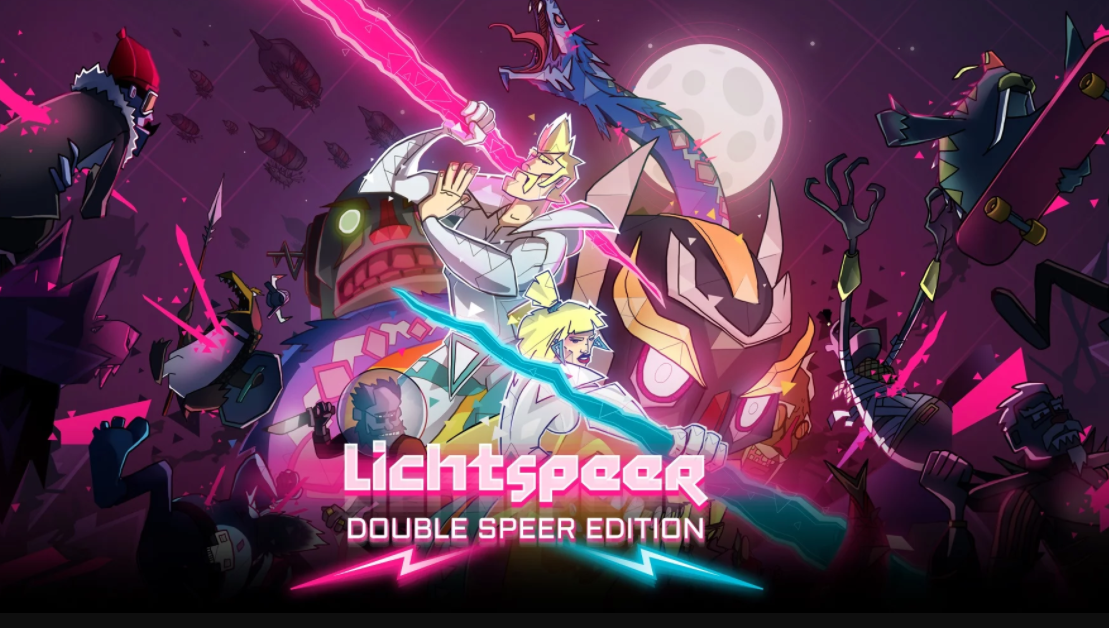 At times, video games never get the best of me with my own emotions. Rarely do I ever rage quit or throw a major fit over the design and difficulty of a game, because I do my best to self contain it. However, in the case of Lichtspeer: Double Speer Edition, all of that was thrown out of the conversation as I feared I would be snapping my Switch in two due to unprecedented signs of anger. But, even when as I was drowning in enemies and projectiles left and right along with a varying difficulty and somewhat cheap gameplay scenarios, Lichtspeer still kept my attention despite my constant pleas for a break.

Made by Polish developer Lichthund and published by Crunching Koalas, Lichtspeer: Double Speer Edition is a 2D action arcade side-scrolling title that has you throwing neon-colored spears at hoards of enemies at the behest of an angry god. You control either a male or female character as you mow down dozens upon dozens of creatures ranging from Hipster Ice Giants to Penguin Vikings to even a fez hat-wearing walrus riding a skateboard. It is here in this ancient Germanic future where you must “survive with style” and survival, I must add, is a key art. As one will see from the first screen, subtlety is not in the cards for Lichtspeer, which takes pride in its 80s inspired semi-futuristic setting, hip soundtrack, and minimalistic art direction. The game here is filled to the brim with bright colors (dominated by a neon palette, of course) and includes varying backgrounds to admire, which lend itself well to the overlaying but strange atmosphere. 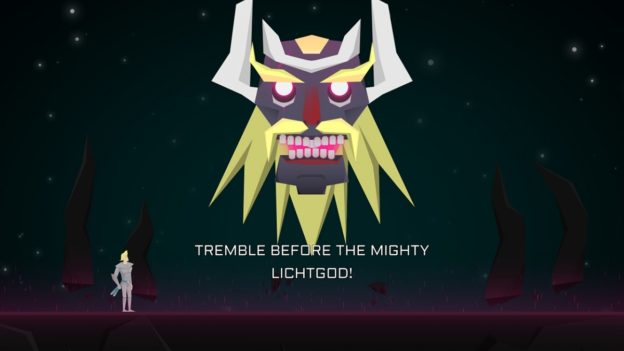 Right off the bat, Lichtspeer controls smoothly and is quickly accessible for those willing up to the task of eliminating every quirky and stylized enemy that crosses their path. While in place on the left side of the screen, you simply aim your neon-colored speer of death and fire away in hopes of making sure not one creature tears you to shreds in one hit. From here, more and more variety of enemies will thrash toward you at different paces of speed and you must concentrate on how to deal with them in quick and easy fashion. The balance of this mechanic is, of course, the base of what makes Lichtspeer an unique exercise of multitasking. That is, you’ll be executing a lot of time in throwing spears at enemies while then worrying about others that require precise hits to eliminate. It’s a simple concept at first that only comes with one underlying truth that it demands your undivided attention as each enemy comes into frame. 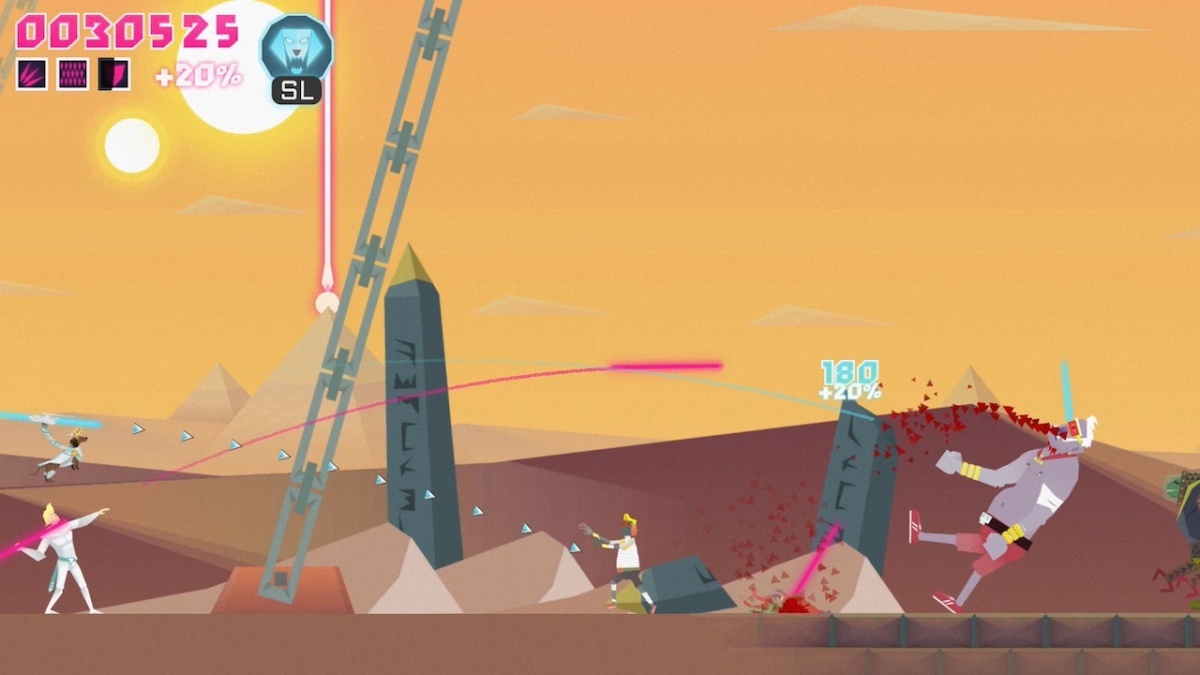 Whether it’s a fast moving zombie or a slow moving Hipster Ice Giant, you best pay attention and throw your spear at will or be met with a certain death. Luckily, though, within each level you’re given much needed checkpoints after clearing one screen. This alone breaks up the monotony that you encounter within each portion of the game’s 13 levels. There is a challenge to be had with Lichtspeer, but it comes at the cost of repeated attempts at a certain stage while adjusting your strategy. Again, this bring us back to game’s difficulty, which ranges from challenging to blood-boiling frustration.

During my time with Lichtspeer, I was met with a good deal of challenges that tested my spear throwing accuracy and attention of concentrating on what enemies to focus on first. In the beginning this is simple, but as you progress this becomes a bigger challenge. You will soon be faced with throwing at enemies coming from an angle or from the opposite end of the screen or even with you upside down (which after many failed attempts I got the clever idea to flip my Switch upside down to account for the inversed scenario). These do offer a great deal of challenge to the player, but you wish there was more variety. If anything, Lichtspeer plays with both your mind and eyes, and that alone can give into both a rewarding experience or random fits of frustration. 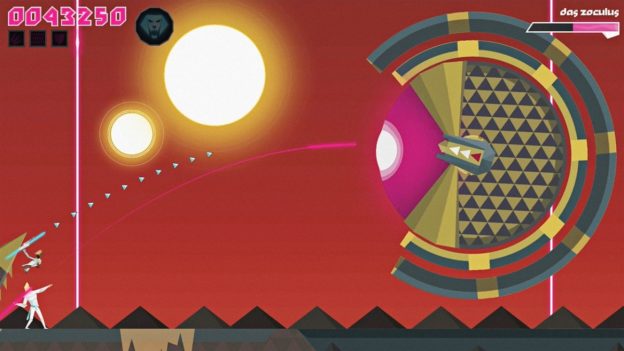 While the gameplay involving throwing spears at enemies with accurate precision can be thrilling, it doesn’t evolve much further even with the available upgrades at your disposal. It’s still fun mowing enemy after enemy, but the padding becomes apparent as both the length of the levels and the difficulty spikes that are thrown at you during the various boss fights. On the subject of the boss fights, though, I must warn you that these will come with the caveat of precise aiming or else you will you be met with death after death after death. That alone gives into the overall theme of Lichtspeer: try and try and try again until you eliminate each and every foe with ease and be met with that relief of satisfaction. 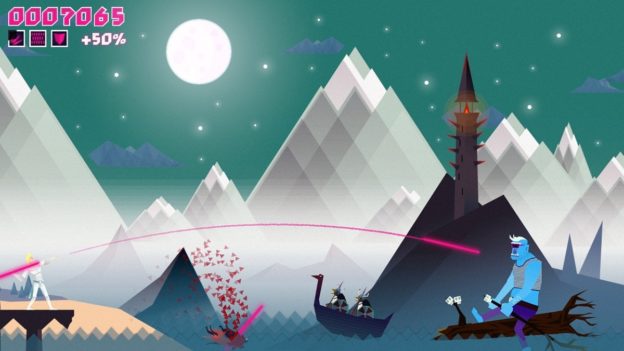 Despite the frustrations that will come with Lichtspeer, there’s still enough to offer a short but fun experience. The Switch exclusive two-player co-op mode does give a little more life to the whole package and modes such as Rage Quit (where checkpoints aren’t allowed) and New Game+ offer you the chance to test your skills with a harder (and nerve-racking) challenge…if you so dare, that is. Sure, while the difficulty spikes within Lichtspeer’s level are a welcome challenge at times, the charm in throwing spears can wear off quickly. While you are given the opportunity to upgrade your character’s offensive and defensive skills, it doesn’t hide the fact that Lichtspeer’s mechanics feel like a one-trick pony.

I may be hard on this game for its various shortcomings, yet there were moments that had me feeling victorious after what felt like the umpteenth attempt. There are fun and challenging moments to dive into with this, but it makes you wish that it had a little more depth and a little less repetitive padding. While Lichtspeer may have given into some anger hidden within me, I’m just thankful I came through the whole thing alive and without breaking something of value.

A Decent But Difficult Experience

Lichtspeer: Double Speer Edition can be both a fun and rewarding experience for those wanting a quick challenge. Otherwise, the fun of throwing neon-colored spears at wave of enemy after enemy can wear thin fast alongside its difficulty curve, which is sure to get your blood pressure rising.