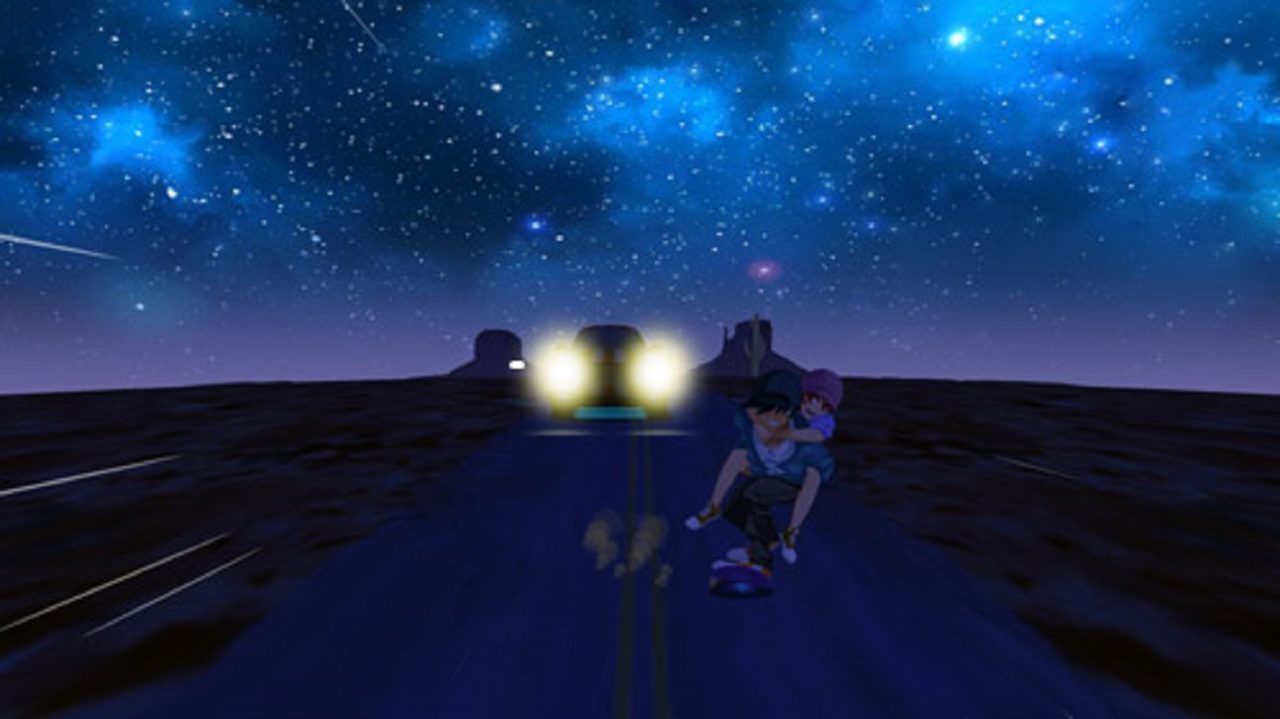 Lost in Harmony is a musical odyssey that features a tale of a boy, his ill friend, and a robot impacting Earth.

The controls are simply moving away from objects before they hit you, using A to jump over certain things, and pressing various buttons that display for you to push to the tune. Along the way, you collect stardust either in orbs or sparkles, which add to your score as well as by avoiding objects and pressing buttons right. You must get at least 50% points to move on in the story.

There are two stories you can play through, Kaito’s Adventure and M.I.R.A.I.’s Escape. Kaito’s Adventure which has 14 dreams, or levels, with a storyline involving a boy named Kaito using musical daydreams to escape the stress of the reality of his best friend Aya falling seriously ill. M.I.R.A.I’s Escape is a 12 level storyline where a robot created by an alien is on Earth with its fate in question. I liked playing Kaito’s Adventure more, although it could be because I had chosen to play it before M.I.R.A.I’s Escape, but I found the storyline to be better and the characters more interesting.

A majority of the music you play along to is mostly dubstep or electronic renditions of some classical music and original songs. The songs often change within a level when you play, and the backgrounds do as well. I liked the cool effect of the background changing and would consider that to be my favorite part of the artwork in this game. The characters are animated lazily, yet do a have an anime-like style in the design of them. The customizability feature to the characters in Kaito’s Adventure is only changing clothing, whereas in M.I.R.A.I’s Escape it changes M.I.R.A.I’s coloring and design since the robot doesn’t wear clothing.

While the songs were well made, they didn’t seem designed for the gameplay they’re supposed to work in. For example, the timing of the cars and other objects you dodge in rhythm to the music is not on point as it should be in this sort of game. This part might have been just me, but the order of the buttons kept tripping me up. There would be parts where you must press two buttons at the same time, but I found little time to figure out what I needed to press, and this wasn’t even on hard mode! There were also noticeable spelling errors and lag in the text of M.I.R.A.I’s Escape and Aya’s little outbursts of excitement distracted me from focusing on the already difficult timing of the music with the gameplay.

Overall, Lost in Harmony feels and looks unpolished to me in terms of the basic gameplay and beats you are supposed to time to the music, which is the least you should expect from a game of this genre. Currently, it’s priced at $6.99, but it may not be worth the expense.

Overall, Lost in Harmony feels and looks unpolished to me in terms of the basic gameplay and beats you are supposed to time to the music, which is the least you should expect from a game of this genre.