Have you ever rocked out in your bedroom with the family broom, dreaming of being a rockstar? And if you’re like me, lack the talent to actually become one? If so, you can now ‘slam down on those chords’ in LOUD, a rhythm game for Nintendo Switch.

In LOUD, you play as Astrid, a teenage girl who embarks on a musical journey to become a real artist. She comes across as a Disney Channel edgy teen who only has eyes for one thing, and that’s rocking out! Whether that be a broom at first or eventually her very own electric guitar. 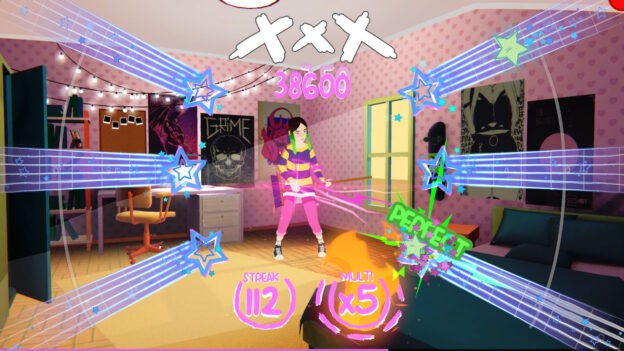 You progress through 14 arcade-like levels as Astrid, performing expertly timed button presses to get the highest score you can, all whilst doing your best to avoid three fatal errors; otherwise, it’s game over! Astrid is centre stage on screen and around her are six guitar necks. At the end of these necks is a hollowed-out star. Your aim is to press, hold or mash the corresponding button as the star moves down the neck to the hollowed-out area. Timing is important and can be a little hard. So much so, LOUD opens with a calibration for you to practice and adjust timing and response windows. As you rack up combos, your score begins to multiply, and Astrid will vocally react with a ‘Woo hoo!’ or something akin to that. 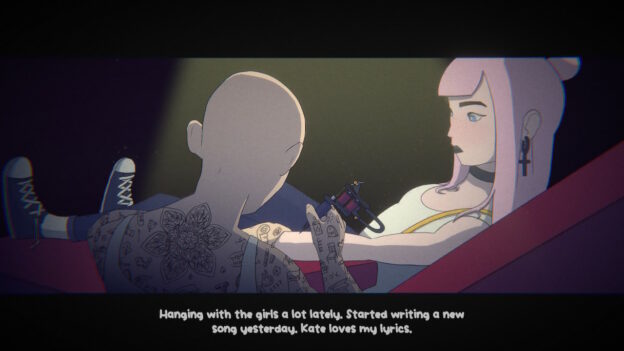 I’m a sucker for rhythm games and get a real kick out of stringing crazy, long, complicated combos together and LOUD certainly scratched that itch… kind of. The control scheme for LOUD makes sense, but I can’t help but feel awkward following it. For the three guitar necks on the left-hand side of the screen, you use the up, left, and down keys on your D-Pad to react to the upper, middle, and lower necks. On the other side, you use the X, A, and B buttons for the opposite. This may not seem too terrible, but one way to increase your score is to warble the long holding notes. This is done by wiggling the joystick whilst still holding the corresponding button. This can sometimes throw off your rhythm and default hand position for the fast-approaching buttons on the other side – and boy, do they come through fast…

LOUD offers three levels of difficulty: Chilin’, Skillin’ and Grindin’. Grindin’ is locked until Skillin’ is completed, which acts as the Normal difficulty. I found Skillin’ to be very challenging, but frustratingly so. It would almost suck you in with a false sense of security and then throw a random string of sequences your way that doesn’t exactly correlate with the music that is being played. I would find that although we are playing as Astrid – a guitarist – some of these button presses would suddenly incorporate a drum beat or no beat at all! On the flip side, Chillin’ seems too easy and unrewarding. I was blazing through each song with little to no errors. It’s not fun when it’s too easy, but it’s not fun when it’s awkwardly challenging either! I wish there was a happy medium between the two called, Kickin’ or something. 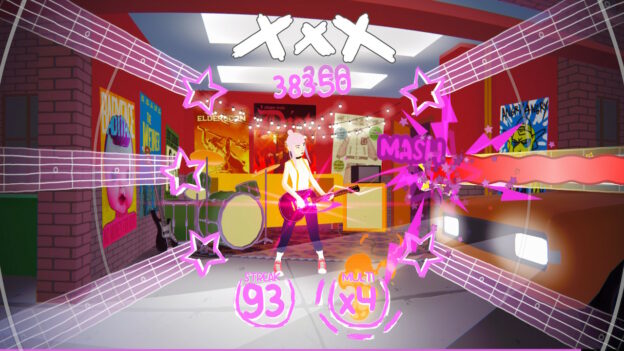 With 14 levels, you can easily complete the story of LOUD in one sitting. The value comes from going back and improving on your score or giving the Grindin’ difficulty a go which will certainly test your patience.

As you progress through each chapter of LOUD’s story, you will unlock a new guitar and outfit. These outfits aren’t just a new dress or hairstyle, they are an entirely new person (not literally, but every aspect of Astrid’s appearance changes). It is still the same Astrid, however, she takes on these new personas, with a newly dyed colour of hair, and even gets a tattoo at one point. The new settings and Astrids help breathe life into the chapters, which is most definitely needed. I found myself just going through the motions with LOUD. Uninterested in the story, unimpressed by the rock tunes on offer, which felt like royalty-free tracks, and just overall a little bored by what was on offer.

With the lack of true musical and aesthetic variety, and either too easy or too challenging difficulty modes, LOUD feels like how my dad describes my music taste – just noise, with no substance. At the heart of LOUD is a fun arcade-like rhythm game that falls short in comparison to many other releases of the same genre. Big props for the Soccer Mommy shoutout, though