I remember playing Luigi’s Mansion way back at the GameCube’s launch but there was quite a bit of the game that I totally forgot about until my recent 3DS play-through. It was both fun and frustrating revisiting this GameCube classic on the 3DS. I’m sure most of us know this bit of Nintendo trivia, but Nintendo actually planned a stereoscopic 3D add-on for the GameCube that was eventually scrapped. Since Luigi’s Mansion was a launch title, it was being developed as one of the first titles to take advantage of said add-on. After so many years, it was cool to see that finally come to fruition thanks to the 3DS remake. Sadly, the 3D isn’t a great selling point thanks to some control issues. 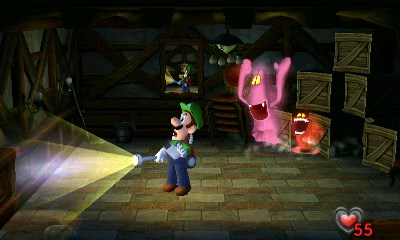 If you’re new to the series, Luigi’s Mansion is all about using your special vacuum cleaner to suck up ghosts and find treasure along the way. The Poltergust 3000 is a very versatile tool throughout the game. Not only can you use it as a weapon, but it can be used to interact with all sorts of things in the mansion. Candles can be snuffed out, curtains can be sucked up and the device can also be used later in the game for blowing fire, water, and ice. Players control Luigi using the main circle pad as they traverse the mansion. There is some freedom in where you can go in the mansion, but it’s controlled using keys for locked doors. There are a few discrete areas and you’ll need to complete various tasks in each area before obtaining a special key to move on. 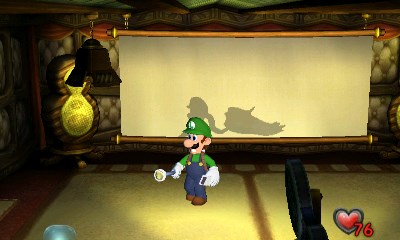 While it was great to see Luigi back in action on the 3DS, the controls are simply too cumbersome. There are some options to configure the controls, but it doesn’t really fix the core issues I had. First, I love the stereoscopic 3D feature of the 3DS (unlike most people) and I wanted to experience the game with the 3D slider on most of the time. This is definitely possible and the game looked great in this mode. However, if you happened to use the motion controls for aiming, even with the New 3DS’ eye tracking, the 3D effect could be lost in tough ghost battles.

Second, if I did decided to use the control stick ‘nub’ on the New 3DS and no motion controls at all, my hands became quite cramped after awhile. The more comfortable route ended up being the motion controls which meant I needed to turn off the 3D slider most of the game. This was a big bummer for me. Now, I know the developers can’t do much since the 3DS hardware is what it is, but it’s definitely not the ideal way to play Luigi’s Mansion compared with the original. It’s certainly novel to have the first Luigi’s Mansion on-the-go, but you will be fighting with the controls more often than not. 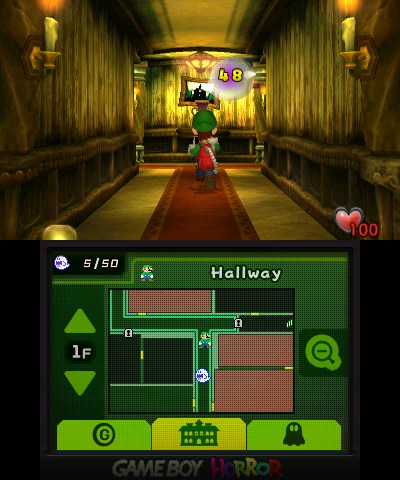 The game looks pretty close to the GameCube version in a lot of ways, but it’s not quite as ‘smooth’. Obviously the game is running at a lower resolution which is where most of the visual downgrade comes from. The stereoscopic 3D was great, when not using motion controls, and the game ran beautiful with or without the 3D slider engaged. Presentation is top-notch for both the game and the menus which is par for the course for Nintendo. I loved having the map on the bottom screen visible throughout the game–this is probably the best feature the 3DS version has over the GameCube one.

There is a co-op mode that has been introduced for Luigi’s Mansion 3DS but it does require 2 systems and 2 copies of the game. Sadly, I wasn’t able to try out this mode but it looks like it could be a fun option. The second player takes control of a Luigi doppelganger named ‘Gooigi’–since he’s made of a green ‘goo’. 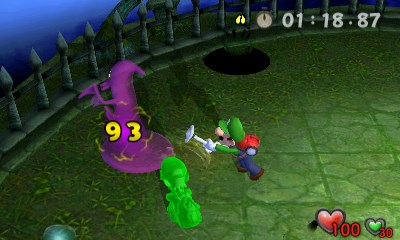 With so many unique ideas, it’s amazing how much Nintendo got right with this imaginative new franchise when it debuted back in 2001. While the controls aren’t the best on the 3DS (a proper second analog stick would do quite nicely), the game still holds plenty of charm.

With so many unique ideas, it’s amazing how much Nintendo got right with this imaginative new franchise when it debuted back in 2001. While the controls aren’t the best on the 3DS (a proper second analog stick would do quite nicely), the game still holds plenty of charm.