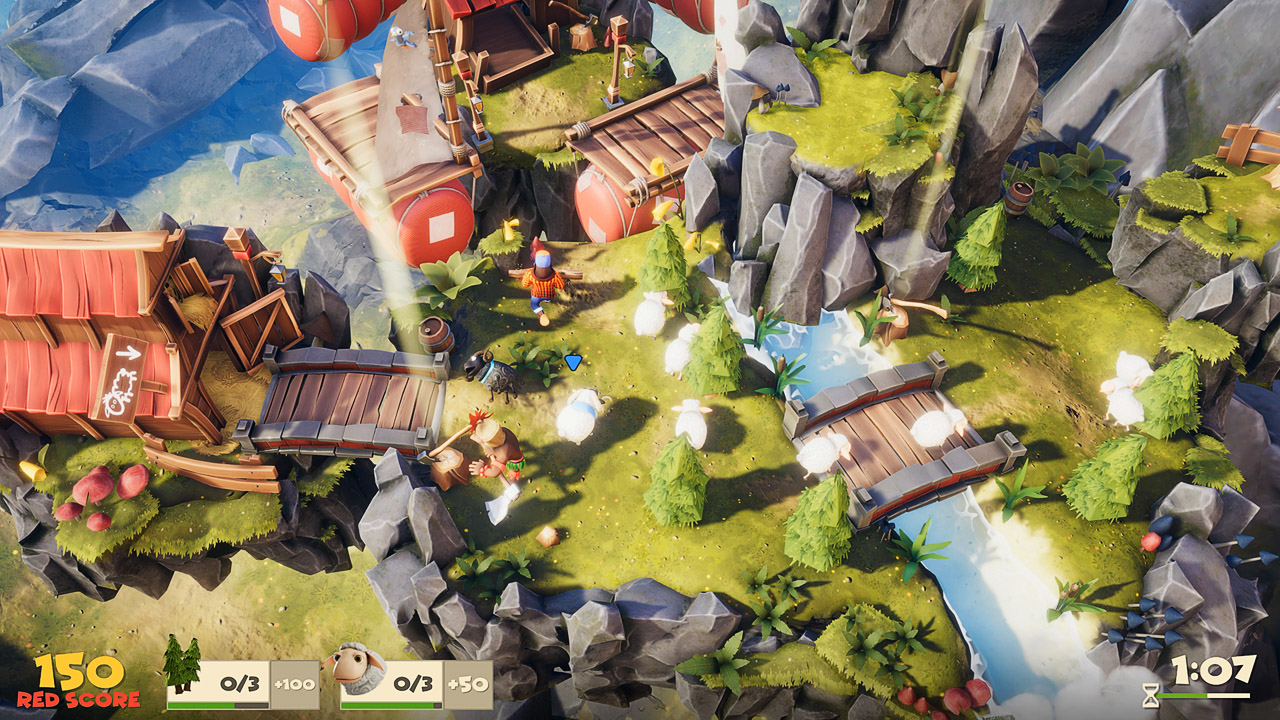 By Kirstie Summers  •  2 weeks ago

Rapid pacing and bold, busy environments combine in Lumberhill to create the kind of colourful, time-challenge game that is easy to learn but difficult to master.

You play as a lumberjack and your key responsibilities include herding animals and chopping down trees. Each level takes place on a new, relatively small map where you’ll have to navigate obstacles to get the wood and livestock where they need to go. Tasks appear at the bottom of the screen and you gain points by completing them as quickly as possible.

You can gain up to three stars per level depending on how many points you get. The more stars you gain, the more new levels, skins and playable characters you unlock. There are a number of story worlds for you to navigate. 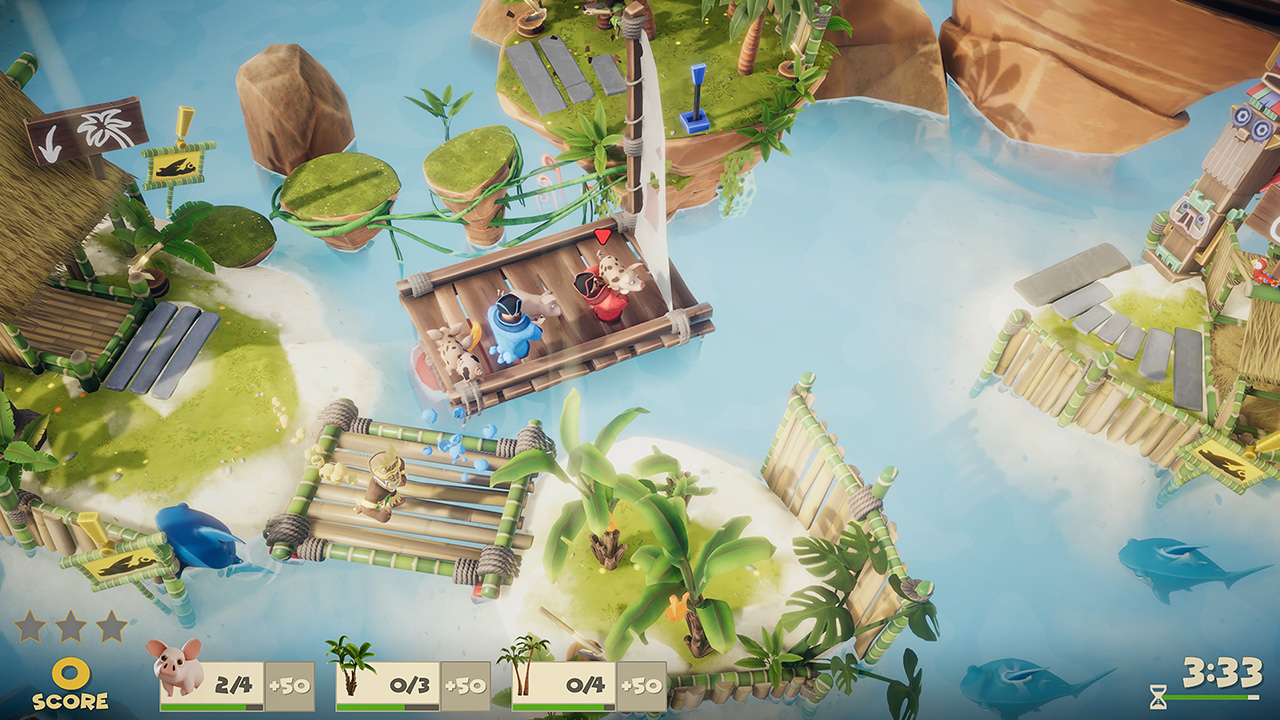 Lumberhill starts off in the kind of world you might expect – a burly man in a checked shirt, surrounded by lush green vegetation and bleating sheep. The game gets increasingly more surreal as you go on. First, you’ll meet new types of trees and animals, such as the pandas you’ll look after in China. Later on, the levels get weirder, as you have to deal with meteor showers, pirates and even dinosaurs.

The designs are certainly fun. It’s difficult not to enjoy the bumbling panda cubs, even if they do stand right in your way when you’re racing against the clock.

The general gameplay stays the same throughout. New challenges will come your way, such as having to utilise moving platforms and put out fires that threaten your trees. But once you’ve got the hang of the early stages, the later levels will fit broadly the same format. 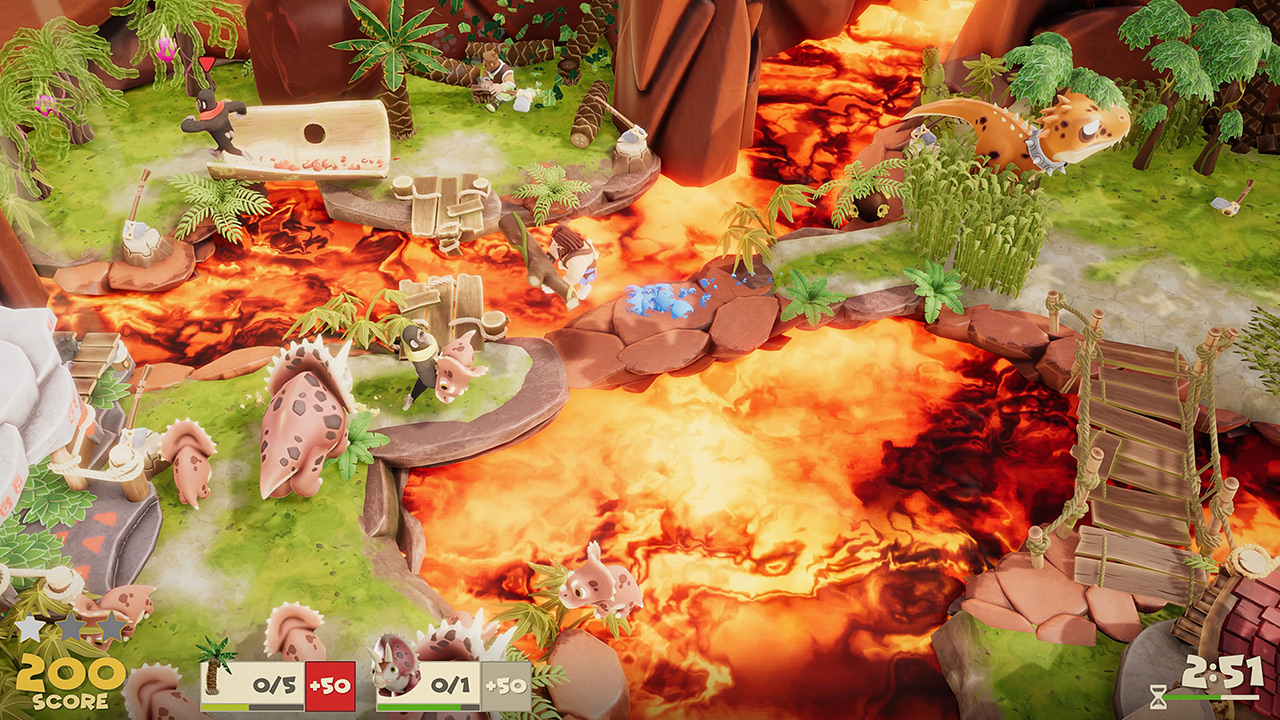 Lumberhill offers various multiplayer options, both local and online, spanning co-operative and competitive gameplay. It definitely has the sort of format that lends itself to a party game. The challenges are more fun when you’re working as a team with friends and co-ordinating the best way to approach each task.

The obvious comparison to draw is with Overcooked. The format of Lumberhill is similar enough that, if you liked Overcooked, you’ll probably enjoy this at least a bit. I don’t think the comparison does Lumberhill any favours, though, as it does make you wonder why you’re not just playing Overcooked. Lumberhill is a bit more chaotic and the levels have less variety to them.

Still, it’s not the worst Overcooked clone out there and definitely has a lot of the right ingredients for a solid party game.

Lumberhill is a perfectly enjoyable, if not entirely original, time-challenge multi-tasking party game with levels that take you to some fun places.