Madden NFL 07 is the first Madden game I’ve owned. It was one of the titles I had been interested in for quite some time. I was never much for sports games, but there was something different about this iteration in the Madden franchise. The Wii controls really make the football experience worthwhile.

Madden plays host to a few different game modes. There is the single-player Franchise mode, and the Multiplayer modes: 2 on 2, Kicking combined, and Y.A.C Attack (I’ll just be highlighting 2 on 2 and Y.A.C. Attack) The single-player mode has everything a football connoisseur could want. There are drafts and even fantasy team customizations. The single-player is pretty much the same as it has been for the Madden franchise. You can play through a single exhibition game, or go the whole season route.

The multiplayer in Madden really makes the game fun–especially when combined with the Wiimote’s unique features. 2 on 2 is the first of the multiplayer modes and allows for up to four players to match their skills in a short game of football. Each team is made up of only a quarterback and a receiver for the offense. The defense is made up of 2 players, one to rush and one to cover the receiver. This is a lot of fun especially when you have four friends playing. 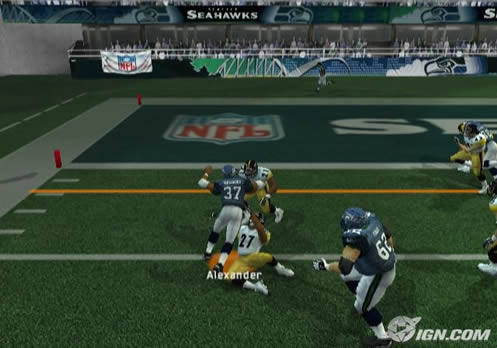 The next multiplayer mode is Y.A.C. Attack. This mode’s name stands for “Yards After Completion”. The goal is get as many points by throwing completions for either lots of yards, or a touchdown. The more yards you run after completion the better with a TD giving you the most points. But a player can also receive “Bounty” points on defense. These points are rewarded for good coverage, great tackles, and forced incomplete passes.

The heart and soul of the game’s value comes in the way of the Wii controls. The Wiimote is used for passing, kicking, and some running maneuvers. The passing is done using a throwing motion of the Wiimote. The speed of your motion will determine if the pass is more of a lob or a bullet. The kicking is done with a swinging upward motion as if your arm was your leg. There are also a couple other functions for stiff arm, pump fake, and spinning. The nunchuk is used mainly for the running game. The analog stick is used for all movements in the game and you can motion left or right for juking left or right.

Visuals: The visuals are clean and the animations are fluid. The fields are crisp and accurately designed to match each locations’ dimensions. There are also nice weather scenarios for rain, snow, and clear weather. The game runs fairly well even when there’s a lot of movement on the field.

Gameplay: The gameplay is a lot of what Madden players have come to expect. The Wii controls add a lot to the gameplay. The controls are tight and don’t take away from the experience.

Replay Value: The multiplayer really adds to the replay value. The single player is great for a season’s playthrough, but not much afterwards. The multiplayer mini games are so much fun! Even being fairly simple games, they provide a lot of good practice for passing/running while giving a competitive experience.

Verdict: Football lovers, this game is for YOU. Madden NFL 07 for Wii provides everything and more for football fans. The mini games are great for people not that familiar with football, but it really helps to know a little about the game before playing. It’s definitely worth a rent and is worth the investment for football fans.