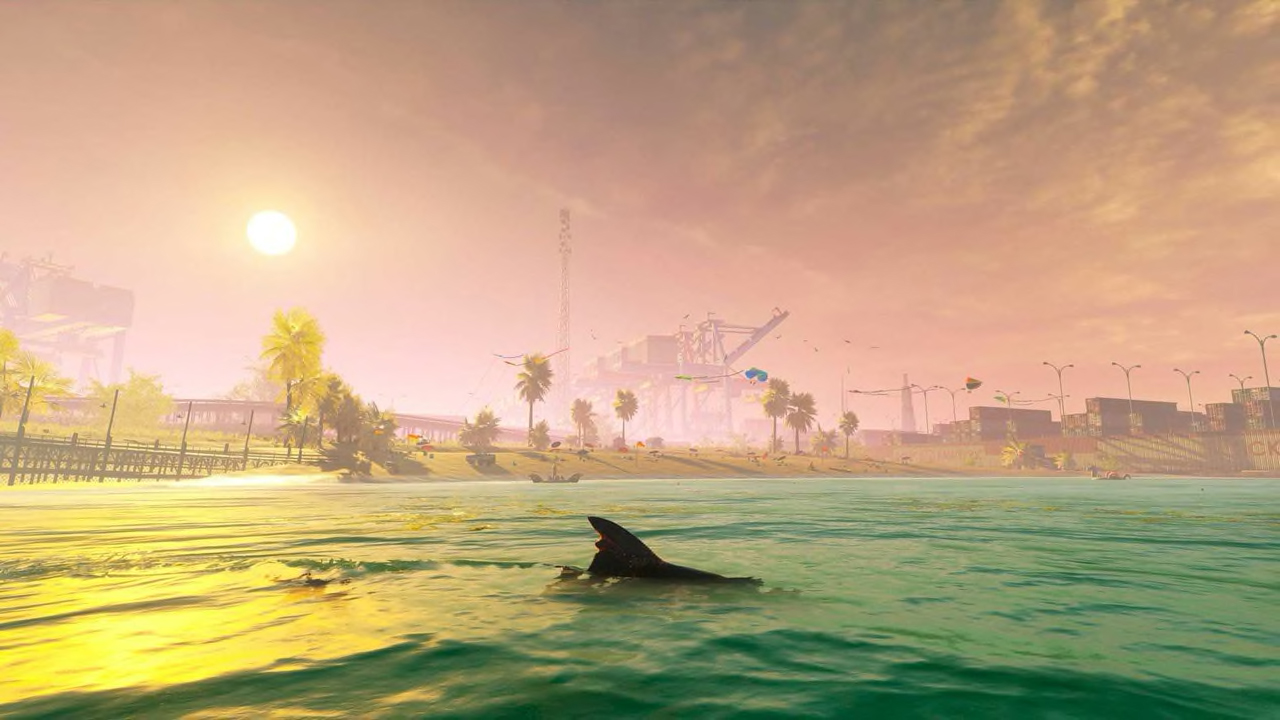 Watch out, boy, she'll chew you up.

Remember the scene in Piranha 3D when the piranhas attacked the beach partiers, turning the water redder than their beer-filled Solo cups? If, like me, your thought the whole time was, “Finally,” then Maneater may be the game for you. I say “maybe,” because unlike that movie scene, Maneater out-stays its welcome.

The premise is that you’re a shark, and the open world is your smorgasbord. Eventually. The game actually begins with a tutorial level in which you’re an adult shark learning how to skim the water, lunge, tailwhip, attack, etc. After just a bit of this, you’re captured by the overly obnoxious Scaly Pete, a man doomed to a life of shark hunting the moment he received his nickname. Pete kills you, then rips a baby shark from your womb. Whether for vengeance or just survival instinct, this baby bites off Scaly Pete’s arm and escapes to sea.

And so, we’ve now got our Melvillean tale of vengeance (albeit from the whale’s perspective). Scaly Pete, however, has been hunting sea creatures for a long time. He’s so used to it that he barely batted an eye when his arm got bit off. How is the baby shark (stop it) going to hold its own? By evolving.

That, then, is your gameplay in Maneater. You’re the baby shark (I said, stop it), and you’ll need to grow and evolve—reacquiring the abilities taught to you in the tutorial—as the game pushes you toward the inevitable showdown with Pete. 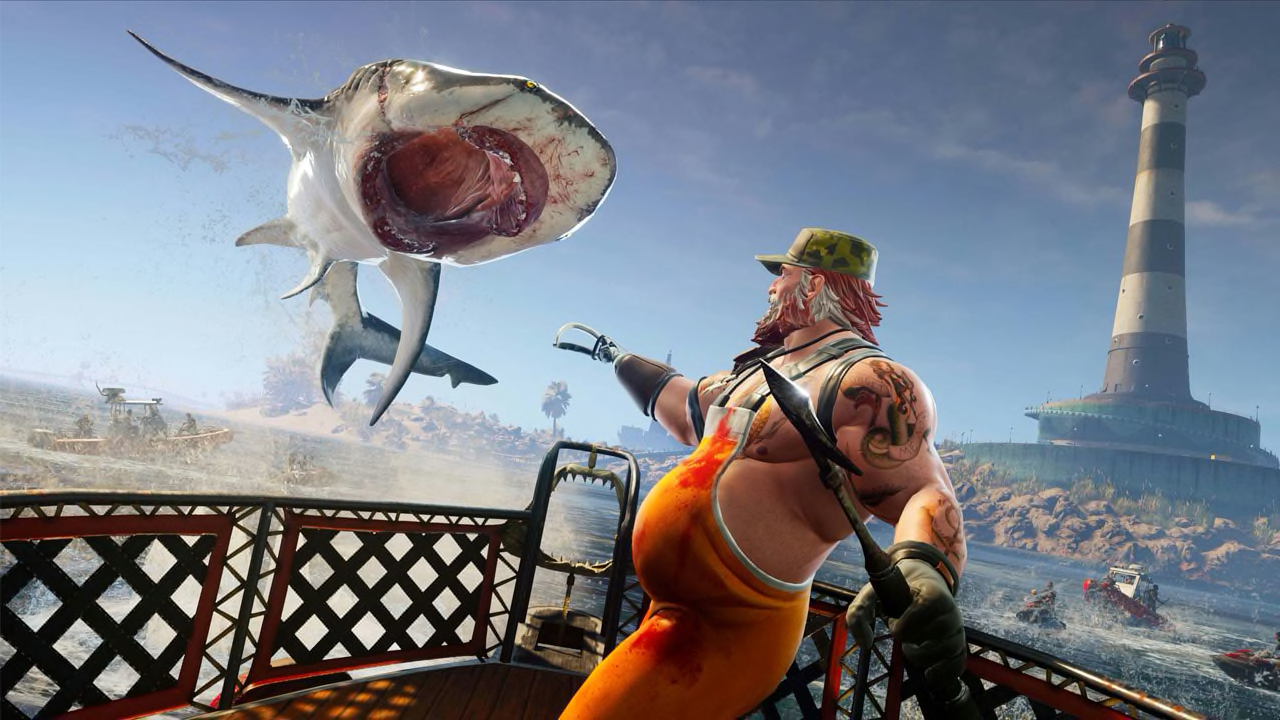 This involves completing myriad tasks that mostly involve exploring new locations and killing as many things as possible within them.

At first, of course, you’re too small to do much. Turtles and grouper are your main source of nutrition, although you very quickly get to have some fun by eating humans. Leaping from the water to snatch an unsuspecting beach-goer from an inflatable unicorn can certainly lead to some gory glee, but the life of a shark is quite difficult. An early task to kill an alligator sets the tone, as battling larger creatures like this requires patience and skill. It gets even trickier when you’re taking on multiple humans with spear guns. 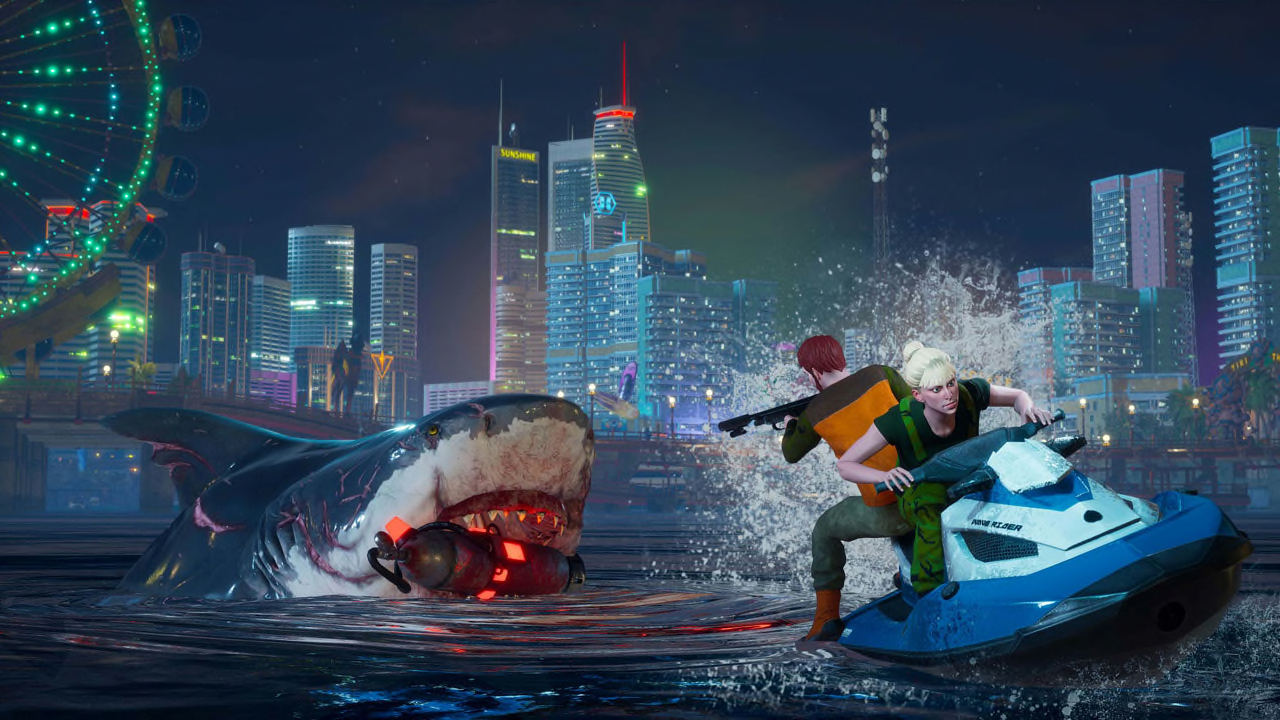 The problem is that the controls are quite clunky. 3D movement in water is often an issue with games, and it’s exacerbated here by adding intense underwater combat that requires precise positioning in order to get your bites in. Maneater allows you to lock in on a target, but it’s not entirely reliable. Spinning yourself and the camera for proper placement is quite difficult. The outcome of some boss battles, then, will be determined by luck, not skill. Thankfully, fleeing the fight to dine on some smaller fish will replenish your health. Likewise, those divers who somehow are able to swim almost as fast as you do become food when you finally finish them off.

As you unlock more locations to explore, you also unlock more skills. The evolution of your shark is not rooted in science, so you’ll acquire electrical, poison, and even vampiric powers. 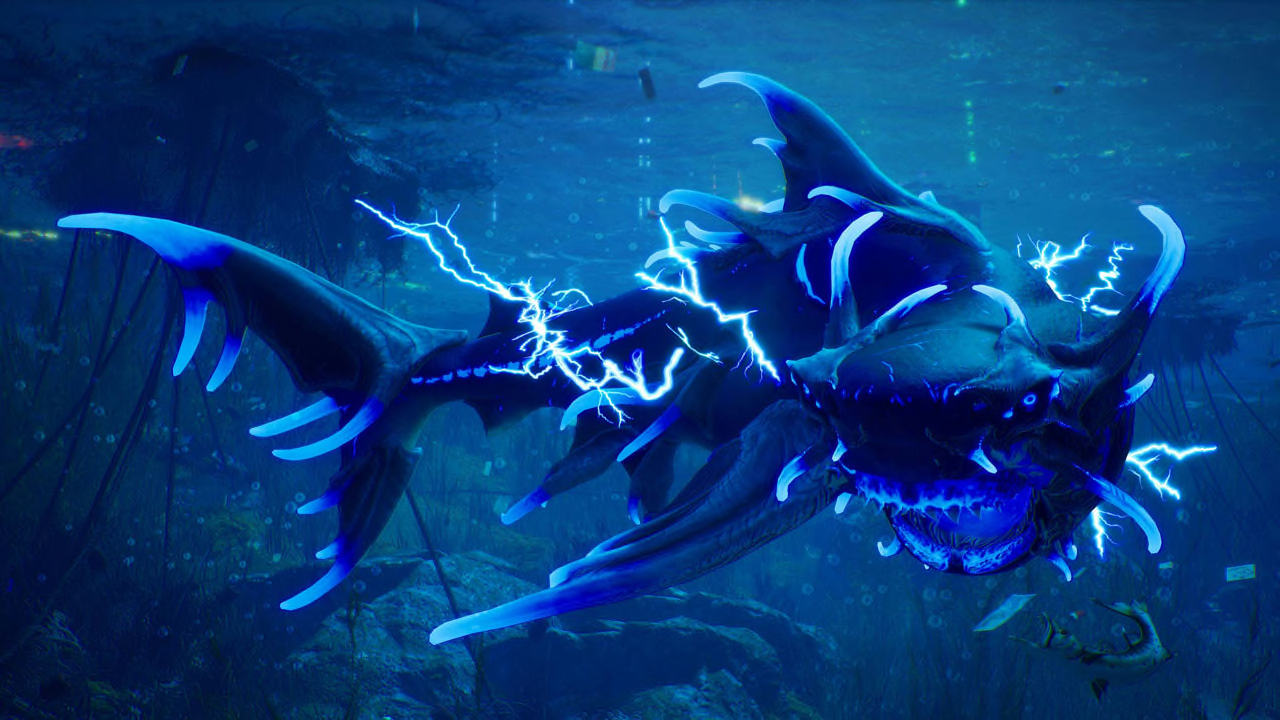 You’ll acquire bone armor. And the more powerful you become, the more fun you’ll have swimming (or warping) back to earlier locations to one-chomp the enemies that gave you such problems before. It’s even better when you’re able to attack humans on land.

All of this is narrated by Chris Parnell of SNL and Rick and Morty fame. His mocking earnestness is very funny here, as if he’s the only guy at Discovery Channel who really understands why so many people tune into Shark Week.

Unfortunately, not even Chris can keep things interesting for long. The world may open up and your shark may grow, but the game never really changes. There’s little variation between the opening challenges and the final battle; it’s all search/attack/heal. New abilities are fun for a bit, and reaching a new location livens things up as the scenery changes and you get more areas to explore. But then you’re right back into the routine. 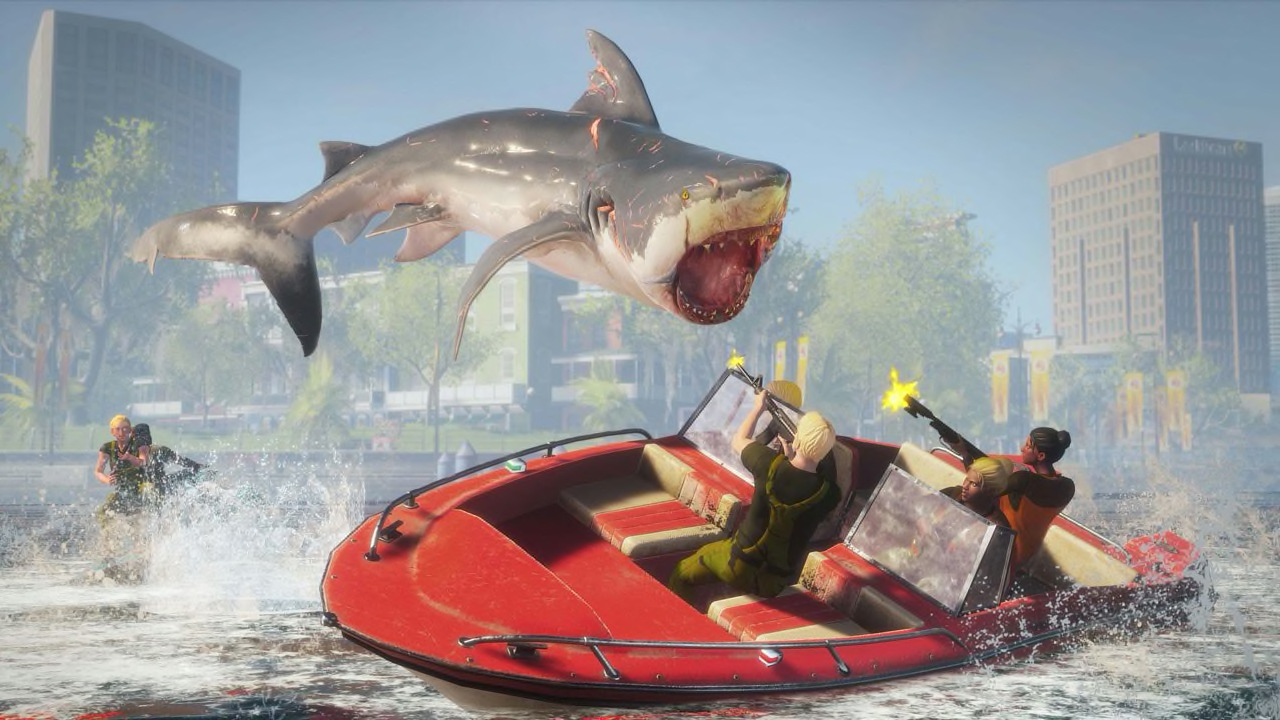 The numerous seek/find quests give you something to do when you’re not interested in fighting, but those also grow tiresome after a while.

The success of Maneater, then, will be determined by how much you enjoy the routine of shark life. I don’t think it’s a game to which you’ll devote lengthy play-sessions, but it may provide just enough to make this revenge-tale worth seeing through to the end.

Maneater certainly gives players a different point-of-view on the action/RPG genre. Taking a shark from its violent beginnings to an inevitable battle for vengeance makes for a unique gaming journey. Unfortunately, its nice visuals and sly sense of humor aren’t enough to break up the monotony of undersea survival.