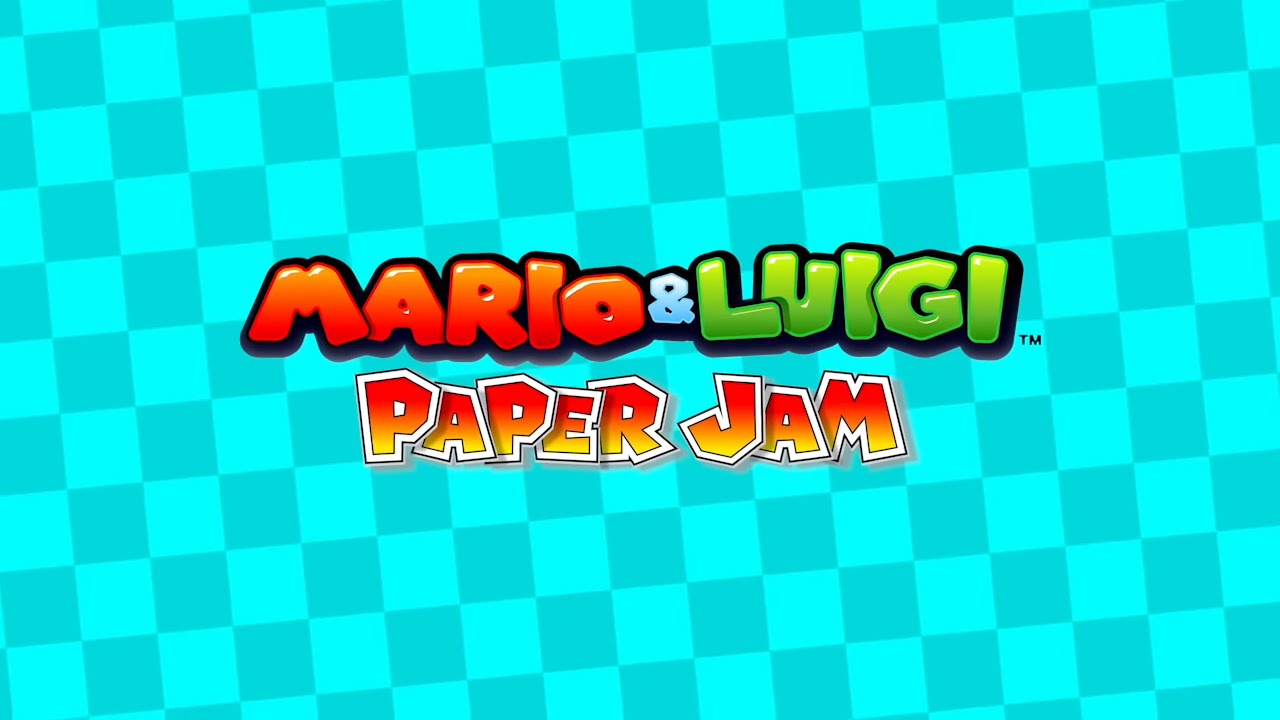 It’s time for another awesome Mario & Luigi RPG adventure! We’ve seen these super bro’s travel all over, even into the depths of Bowser’s digestive system (ech!). But this time our heroic plumbers will be taking on a whole new challenge… PAPER! That’s right! The worlds of “Mario & Luigi” and “Paper Mario” combine for an awesomely, whacky RPG adventure! 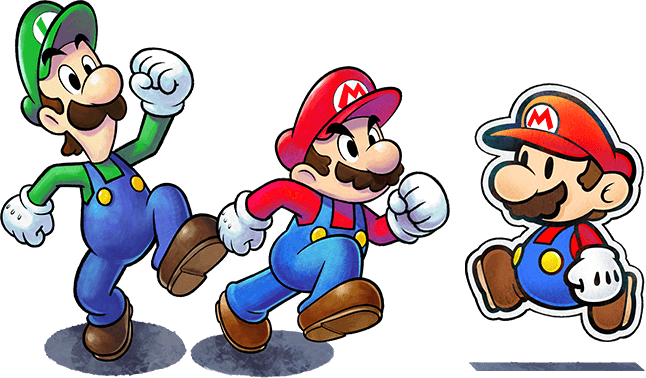 Paper Jam begins with Luigi and Toad searching for the source of a cold draft in the Princess’ attic. During their investigation they’re greeted by a mouse. This of course, sends Luigi into a frenzied panic and causes him to run into a bookshelf, knocking one of the books onto the ground. As he’s trying to compose himself the book starts moving, then all of the sudden a bright light appears and then BAM! An explosion of paper characters emerge from the book and flood the Mushroom Kingdom. Long story short, Luigi accidentally stumbled upon another dimension that leads to the Paper Mario world. Pretty cool right?

It gets even better when you see all of the characters react to their paper doppelgangers. Of course Bowser and Paper Bowser team up, but they’re constantly arguing and competing with each other over who is more evil. Which means…you guessed it, both Peach and Paper Peach get kidnapped together, giving them plenty of time to get to know each other. This makes for some very entertaining dialogue, which we’ve come to expect from the Mario RPG series. For me personally, its my favorite part about these games. After you progress just a little further into the story you then meet up with the infamous, Paper Mario. There isn’t really any dialogue between the 3 plumbers but their reactions and animations are pretty great. Luckily you have Starlow (Mario & Luigi’s sidekick from their previous adventures) to interpret for you. She’s also there for info and in game advice, should you need any.

One thing I really enjoyed about Paper Jam was that I didn’t have to watch or play through tutorials if I didn’t want to. The battle system is very familiar if you’ve played a previous game in the series. People unfamiliar with turn based RPGs can use the helpful tips and tutorials that are available in the battle guide. But it’s pretty easy to get the hang of things. While exploring the Mushroom Kingdom you will come across various enemies, from both the “real” world and the paper world. When you encounter them this triggers a battle scene (like Pokémon for example). Mario, Luigi and Paper Mario each get a turn to either attack, use an item, team up, or run away. The A button controls Mario, B controls Luigi and Y controls Paper Mario. This also applies outside of battle if you want to make a specific character jump or use their hammer. It’s a pretty convenient setup, especially when using special attacks or combos. There is also a nifty assist mode which will help more inexperienced players out and give them hints if they’re having a hard time. When defeating a set of enemies or a boss you will receive EXP. When you get enough to level up this raises the Mario bros stats, like HP, defense, attack, etc. Battling is a big part of the game and one of the more enjoyable parts.

There are tons of different abilities and team attacks for you to use during battle so it’s not one of those repetitive “press A until it’s over” type games. You also have to pay attention because you can dodge or counter enemy attacks and cause more damage when attacking, if you press the corresponding buttons at the right time. Paper Mario is also equipped with a new ‘copy’ ability that allows him to create copies of himself during battle. This gives him more attack power and defense for a few turns. Another new ability is the trio attack. When you activate this all three bro’s get together and deal a good amount of damage to all enemies on the screen. However they do require a little practice to pull off. 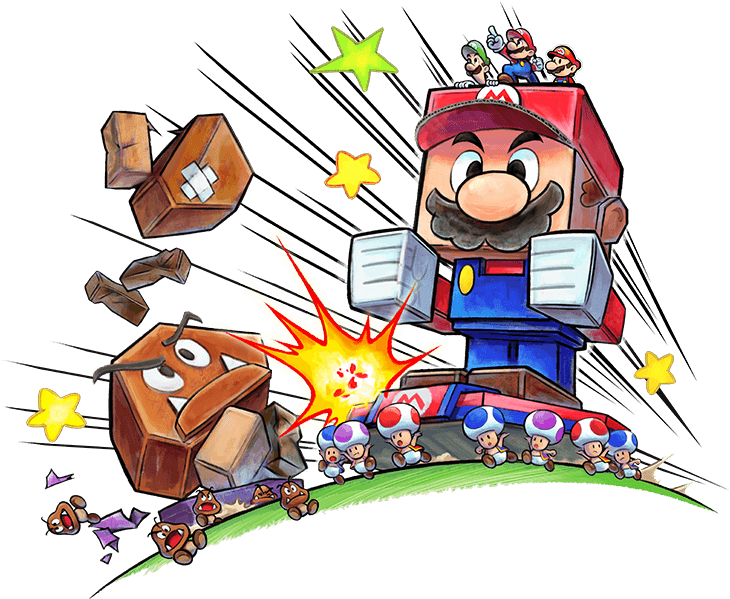 Now that we’ve covered the gist of the general battle system I will now explain paper craft battles. During your adventure you will come across a few giant paper crafts that the enemies have created in an attempt to squash the Mario bros. Luckily there’s a team of awesome Toads back at the castle that have made some very awesome paper crafts of their own to assist you. Using the joystick you can move the paper craft around an arena setting. The enemy paper crafts are scattered about. When you approach them they’ll go in for an attack. If you press B you can dash into them or you can stun them and go in for a much more effective attack with the A button. It gets a little repetitive at times since there isn’t much you can do attack-wise, but overall I enjoyed my time with it. It’s also fun to see all of the different paper craft characters the Toads make for you to use.

One more thing I should mention are Battle cards. These can be unlocked a little later in the game and each one has a special ability that can help you during battle. This is also where amiibo come in. If you have a Mario, Luigi, Peach, Yoshi, Toad, or Bowser amiibo you can unlock special battle cards. However I don’t open any of my amiibo figures so I haven’t had a chance to try it out. As complicated as the whole battle system sounds its really quite simple, and fun. Other than kicking butt, the 3 Mario bros will be exploring a variety of different settings (desert, mountains, valleys, etc.) all of which incorporate the paper world in some way. Even if it’s just a little bit of cardboard in the background or some paper enemies roaming about. I really like the way everything meshed together. The graphics are cartoony but there are a lot of small details that make the surroundings and characters really come to life. Overall the game looks and plays great!

It’s nice when you don’t have to worry about battling and you can just explore a bit. There are tons of secrets and hidden paths to find. Most of them lead to coins or items but you may stumble upon a few surprises if your lucky. There isn’t a lot of back tracking when it comes to the main story. But as you progress you gain new moves that allow you to access new areas. So it’s always a good idea to go back and checkout places you weren’t able to access before. There are also shops you can spend your coins at. You can purchase mushrooms to heal party members, honey jars (these refill your BP which is used for special attacks) and many other useful items. Another new addition to Paper Jam is the Lakitu house. You can go here to participate in different challenges and side quests, such as fighting a boss you’ve beaten previously or doing a Paper Toad quest.

Paper Toad quests are pretty frequent in Paper Jam. These have you going around a specific area in search of a random number of hiding Toads. Find all of them and you’ve completed the quest. They’re easy, but slightly irritating because some of the Toads run away from you and some find incredibly good hiding spots . A lot of people found this part of Paper Jam to be annoying and tedious, which it can be at times. But they’re not bad enough to ruin the experience of the game or anything. You may have the urge to punch Toad and his little friends after going on a few of these quests but it’s for a good cause. I mean after all, no one else I coming to save them. 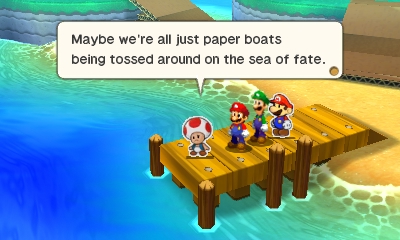 In my opinion Paper Jam is a step up from the recently released Mario RPG games (Paper Mario: Sticker Star and Mario & Luigi: Dream Team).  As a long time fan of both series I’m very happy with the way ‘Mario & Luigi Paper Jam’ turned out. It’s refreshing, fun and a great addition to the Mario & Luigi series. From the story, to the epic battles and hilarious dialogue this is definitely a game you’ll want to add to your 3DS library, just for the experience alone. I personally don’t play many turn based RPGs, but when Mario’s involved I know it’s going to be a good time.

It’s time to JAM! “Paper Jam”, that is!  This awesome, witty, Mario mash-up is a refreshing addition to the Mario & Luigi RPG series. There are a ton of new abilities and attacks to master when using Paper Mario. And battling is more fun than ever with the power of THREE! I highly recommend checking it out.