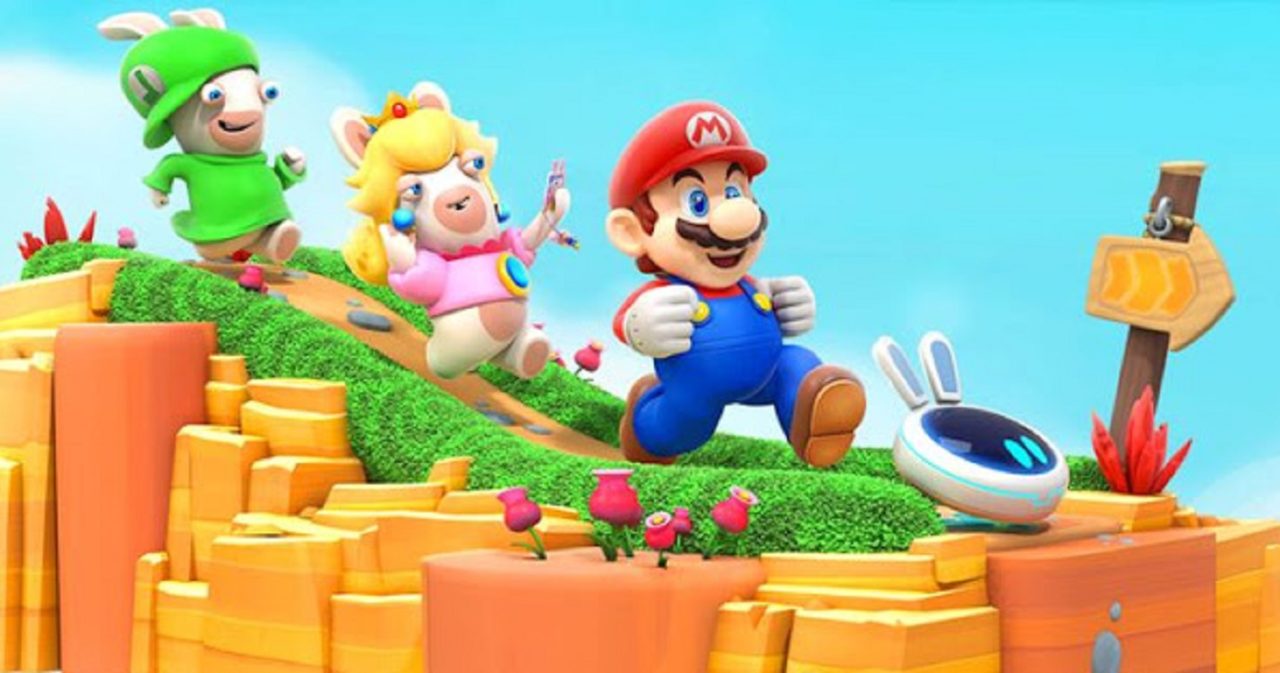 I’m publishing this review on the night before Mario + Rabbids Kingdom battle releases to the general public, yet the game has already developed a colorful history. Rumors and skepticism, flip-flopping impressions, and a pairing that’s probably still causing some gamers to scratch their heads. Ubisoft has generated plenty of talk, but does their new strategy adventure have what it takes to be the next hit on the Nintendo Switch?

The game was received well at E3, picking up a couple of awards along the way. It’s easy to see why with its splendid aesthetics and “Easy to play, difficult to master” gameplay. But I’m getting ahead of myself. The setup here is a science experiment gone haywire, as the Rabbids mischievously mess around with tech they have no clue about and teleport to the mushroom kingdom. Chaos ensues as Mario and company team up with a few helpful Rabbids to bring things back under control.

Yes, part of your enjoyment will likely stem from how you view the Rabbids. The PN team has mixed opinions on these crazy critters. I don’t mind them so much, (maybe because the only game in the franchise I own is their Wii début) and thus had optimism for how they’d mix with Mario and crew. The end results aren’t bad. Some of the jokes drag on for too long, and toilet and underwear humor are lowbrow, but this title is more successful in other ways.

The gameplay starts you off with getting a handle on the basics. Those who have experience with tactical turn-based titles like this will find the early goings pretty easy, albeit enjoyable. Ease does not last long though – the game gets surprisingly difficult, even more so if you want to earn gold trophies. The third world especially, Spooky Trails, sees a considerable difficulty spike. Be prepared to experiment with different group combinations on replay, as you unlock more characters and weapons. Be ready to grind through earlier levels (for coins) as well, which actually isn’t as bad as it might sound. The aesthetics go a long way in aiding such processes.

To be direct, the game looks great. Ubisoft’s packed a ton into each Mushroom Kingdom locale, giving the surroundings a denseness and scope, that made me often stop to pan the camera about and take in the various sights. Occasionally a magnifying glass will pop on the screen to let you zoom on some fun close-ups. The adventure parts, where you can explore freely and solve puzzles (largely of the sliding block variety), have really heightened my excitement for Odyssey’s upcoming release. On the audio side, the initial trailer, with ill-fitting rock music, had me worried, but the soundtrack doesn’t disappoint. Grant Kirkhope is in fine form here. Listening to his take on Super Mario 64’s castle theme, among others, once again made me stop playing for a time. Musical tracks, gorgeous artwork, and more are scattered about, to be heard or viewed at your pleasure. If you spring for the pricey collector’s edition, you’ll get the official soundtrack CD.

Getting to the nitty-gritty, the turn-based strategy mixes things up. Sometimes you must defeat all enemies – other times it’s just a certain amount. Escort missions force you to take more of a defensive stance. Occasionally you’ll just have to get to a certain location, which means avoiding enemies as much as possible. Having the right group and right skill tree upgrades is often the difference between success and failure. For example, Mario has a sight ability that lets him sometimes shoot foes on the run. While often handy, it can be more of a hindrance than a help if dealing with Rabbids that charge when shot. Trial and error, plus experience, will help you learn each character’s pros and cons, and decide when and where to utilize them.

Earlier I mentioned grinding, but it’s really not what you might be thinking. With brand new challenges, accessible areas, items, and even hidden levels, things stay feeling fresh. This surprised me, in a very good way. Kudos to how Ubisoft has handled this.

The weapons are something I feel I should delve into a little deeper. An unusual choice perhaps, but they’re designed in such a way to secure the E10+ rating. The guns (there’s also mêlée weapons) are interesting both in look and performance. They have features that can come in handy and encourage swapping. An early example is the Piranha Pelter, which has a 30% chance of shooting honey that’ll make an enemy unable to move. Other guns shoot blinding ink or have the ability to push a foe back. There’s much to discover over time. Do be careful though – after moving your character they’ll often default on the least practical target. Take your time so you can adjust.

Let’s talk co-op, which gets unlocked very early in the game. As some of you know, I’m a big co-op fan. While the co-op is great here, with you and a friend splitting control of a squad of four, it’s also disappointing insofar as it’s limited. Why the whole game can’t be tackled cooperatively is a mystery to me. Had Ubisoft enabled this, I’d enjoy the game even more. Some additional cooperative maps will be coming via the season pass. Wait, what?

Yes, in case you missed it, Ubisoft recently announced a season pass for this game. For $19.99 you’ll get DLC that includes some initial goodies, with more sizable additions appearing down the road. Steampunk weapons sound cool and all, but there’s really nothing to go on just yet. Announcements such as these can be really divisive amongst gamers. However, for better or worse, you won’t need to worry about content.

The effort put into Mario + Rabbids Kingdom Battle is evident in the high-quality of the game. True, the Rabbids can’t really hold a candle to Mario and friends – their crude brand of humor will understandably turn some gamers off. Also, non-genre fans might not find this take their cup of tea. But if early critical reactions are anything to go by, this Switch exclusive should do just fine. Which reminds me, our multimedia manager, Matt Paxton, said in Koopa Kast 99 that if this game wasn’t critically panned, he would eat his hat. Hope you’re hungry Matt.

The effort put into Mario + Rabbids Kingdom Battle is evident in the high-quality of the game.