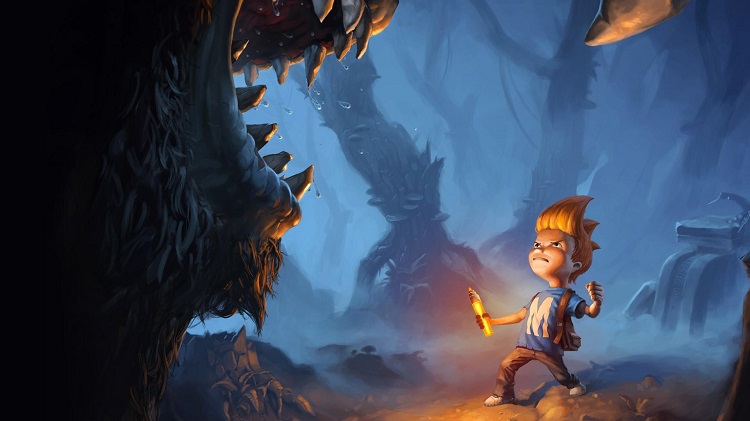 Max: The Curse of Brotherhood—Stage Clear Studios’ follow-up to Max & the Magic Marker—was originally released for Switch in digital form back in December 2017. If you missed this clever and colorful puzzle/platformer back then, it’s worth a look now that a physical edition has been released to stores.

We learn two things about our young hero, Max, very early in this game. First, he has an annoying little brother. Second, he’s never seen the movie Labyrinth. Were that the case, he would’ve never gone online to look for a poetic spell with the power to take his brother away just to prevent his toys from getting busted. But he reads the poem, a monster appears to pull his brother through a portal to another world, and Max jumps through just as it closes.

Max immediately finds himself in a somewhat barren landscape, his brother still in the clutches of the monster. But Max is young and full of energy, so he begins his quest to get him back. 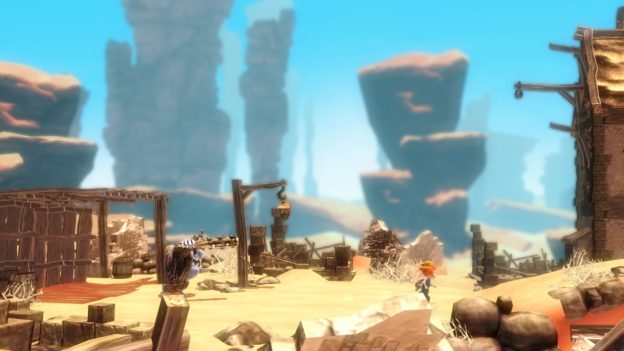 After some initial jumps, swings, slides, and chases, he meets an old lady who offers a brief explanation of what’s going on. More importantly, she powers up the only object in Max’s possession: a magic marker. With it, he now has the ability alter the landscape, allowing him to trick enemies, reach otherwise inaccessible areas…you know the drill.

I’ll focus on the marker for the moment, as that’s mainly what helps Max: The Curse of Brotherhood stand apart from the multitude of other platformers available for the Switch. You can’t just draw anywhere with it; you are instead presented with starting points. Indicated by glowing lights, you place the marker at this position and move in the direction you want to draw. To draw platforms to climb or land upon, for instance, you draw up. To create branches you can run across, draw in the direction you want the branch to stretch. 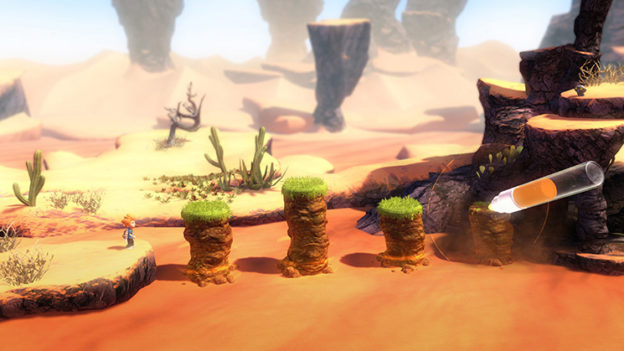 Because of this mechanic, the Nintendo Switch is probably the best platform for Max: The Curse of Brotherhood. I prefer to play Switch games in docked mode, and you can do that here. The ZR button triggers the magic marker, which you then move into place. It helps that the marker snaps to the starting point when you get it close. You then hit A and hold it down to draw. If you want to remove an element you’ve already drawn, hit Y and drag across it. This works fine for the puzzles through which you have time to work, but there are many points where time is not on your side, as when you’re being chased or have to create platforms while falling toward the always-dreaded lava. It’s at these times that drawing with your finger on the Switch screen in portable mode provides the precision and speed to make such moments much easier to get through, which helps ease the frustration factor.

Max: The Curse of Brotherhood has a couple other things going for it as well. The cinematic presentation in the cutscenes and during actual 2.5D gameplay is quite impressive, creating a sense of scope that’s often lost on platformers. You see a whole world here, not just a confined area. Also, the gameplay changes up enough between general platforming, timed events and puzzle solving to set a pace that’s neither too fast nor too slow. It also helps that Max is a likable guy…if not a bit creepy-looking sometimes. He doesn’t talk much at all, he mainly just reacts to what’s going on around him and offers little victory taunts when he beats a puzzle or an enemy. 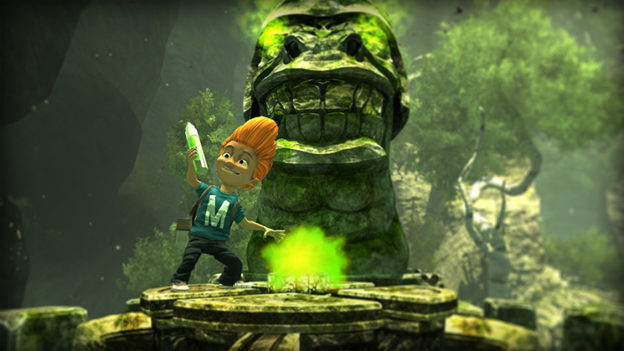 However, there are a few elements that prevent Max: The Curse of Brotherhood from getting a more enthusiastic recommendation. Parts of the game are just unnecessarily difficult, and some are impossible to get through without dying at least once to learn the proper steps forward. Thankfully, the game has a heart and usually starts you near what you killed you instead of sending you back to the beginning of the level.

It doesn’t help that the controls feel a bit sluggish. I often missed jumps I’m sure I hit, but the button didn’t register in time. Considering the multitude of timed jumps from slides and during chase sequences, I ended up becoming more frustrated than I would have liked. 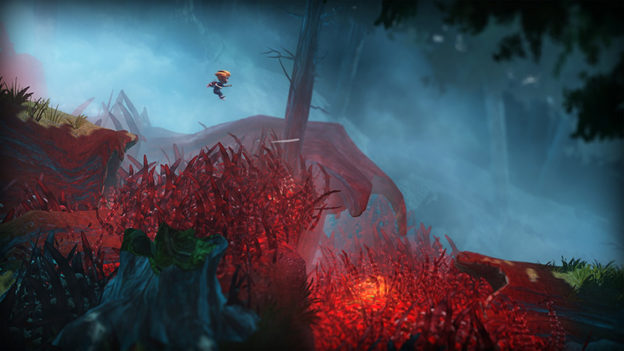 Finally, there’s not a lot of replayability. Completionists may want to play through Max: The Curse of Brotherhood a second time to acquire all the game’s collectibles, but I imagine it’ll be one and done for most gamers.

It’s easy to overlook Max: The Curse of Brotherhood when searching for a good platformer, but don’t. Some frustrating moments aside, it’s a well-designed twist on the genre that’s quite at home on the Nintendo Switch in terms of visuals and controls. Those who didn’t complete it on other platforms will find the Switch’s touchscreen eases much of the difficulty, and the $15 price tag ($30 for the physical copy) makes it a game that’s easy to pick up between bigger releases. And if there’s a lesson to be learned here, it’s that you really shouldn’t mess around with spells you find online. You never know which ones will actually work…even if they don’t begin with “I wish…”